"A reimaging of Postal III's early development stages from 2008 to 2010" Synopsis: After the ending of Apocalipsis Weekend. Dude arrives to Paradise sister town Catharsis. Live a new aventure across a new week and a new city full of charming people to KILL. Lots of fun items and weapons to use in your own way trough the day.

Hi there, NEXER here or DOKA

I started Postal 3 Amnesia as a separated game from Postal 3 base game, I wanted to go further and make Postal 3 what it should have been, a good sequel and doing it all from scratch, basically P3A was going to be a HL2 mod and not a Postal 3 mod. But instead I went front a void of endless frustation, hate and losing motivation and friends that I met and that taught me important stuff that later I used in Postal 3 Amnesia. I regret every sins I commited to this day. If anyone is a Postal nerd like me you might have heard of the Postal 3 Source Code and 2007 Build that leaked almost two years ago, I did it, I leaked it and I hate that decision I took...

I leaked that build because of hate, I saw P3A going nowhere. Everyone that helped me developing was there waiting to it to go somewhere but I had no help with the code and I felt all the responsability of getting somewhere, with the fear of that people that where there to leave and everyone that entered as a programmer did nothing and I was full of frustaration cause one of the programmers was from WJI. I worked in WJI for almost one or two years and I got the build from them. One of the WJI programmers via another member that worked for me and WJI said that this programmer was interested in P3A. Together we got what we tough was almost impossible and it was the Postal 3 Source code. All left was to add some content of this code, work it a bit and get level designers and some 3D artists that is what I tough but that guy didn't do anything, I don't know why and I can't blame him. I went mad, deleted the RedTerrierEntertainment discord server and started getting more and more mad and even shared Catharsis Reborn videos with another user who delated me in a... kind of stupid way and I deserved that. The after that I just leaked all the Postal 3 content I had, everything... Once I did I just erased it all.

This is the truth, I went mad, I've lost all support due to my stupidity and now I'm in good terms with WJI members but from here I want to apology everyone of you for being a massive punk who did all wrong cause a huff I had senseless. I was a bad person at that time and I think I need to do this... I try to joke with it around but I just can't, I feel strange to talk to WJI members after what I have done and I wanted to do this to confess myself and let it all out.

Postal 3 Amnesia and what it could have been

Postal 3 Amnesia was very ambicious, I wanted it to be the perfect replacement of Postal 3, a game that you could play and have fun, do stuff you couldn't in the original game and be more open, I didn't want it to be very big but I wanted it to be fun to play and to have a fun story based on the documents and the storyboards. This is what I wanted to add to the game :

- There where gonna be some new enemies and cut NPC's that would return and be introducted here. For example the musculated NPC's and a swat enforcer that would be even taller and deadlier, being a mini-boss that you would encounter in the DEA raid mission.

- Maps where bigger and we would see 5 main hubs, this ones had a lot of enterable buildings and interesting missions.

- The most impossible thing I wanted was to let the player decide by himself the missions he wanted by himself.

- Getting arrested like in the alpha, this could have been possible if the FSM system was implemented but never happened.

And now we will pass to the maps, the real deal of the mod... 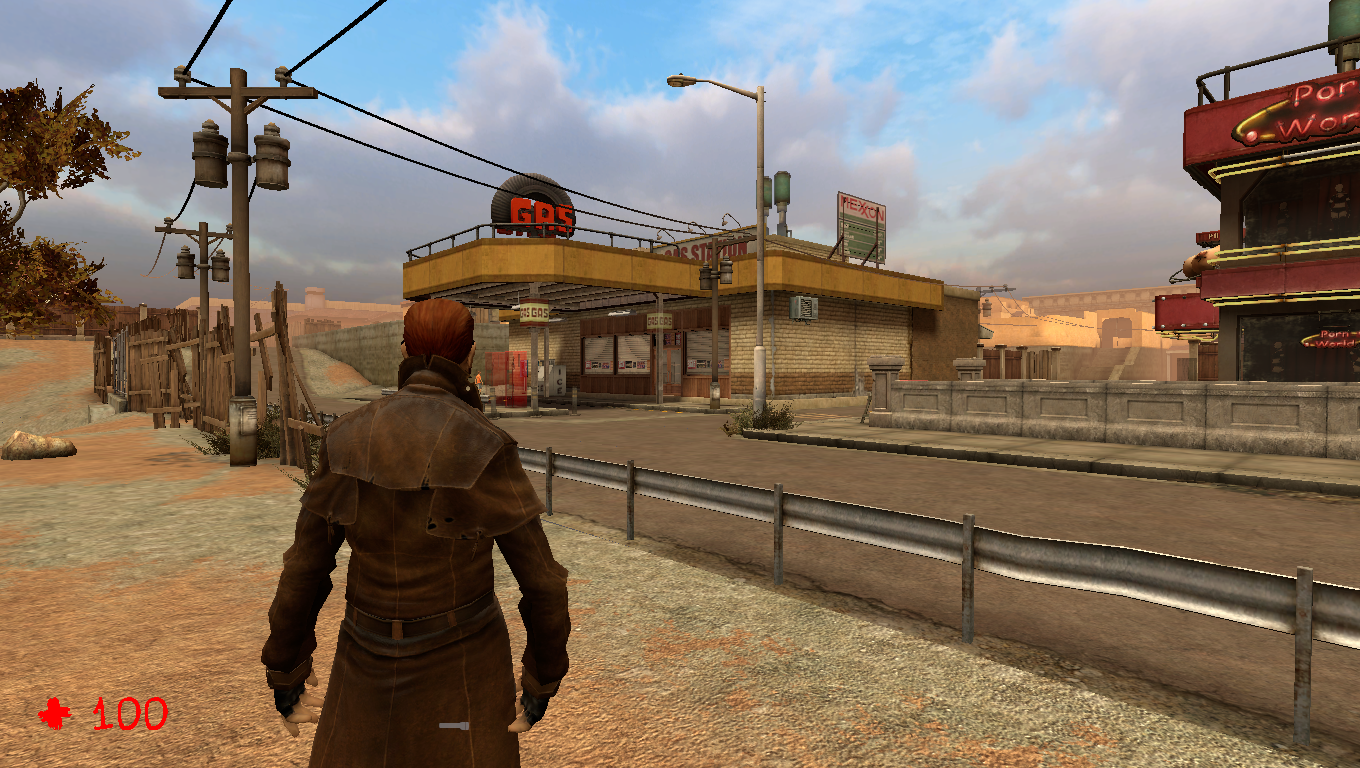 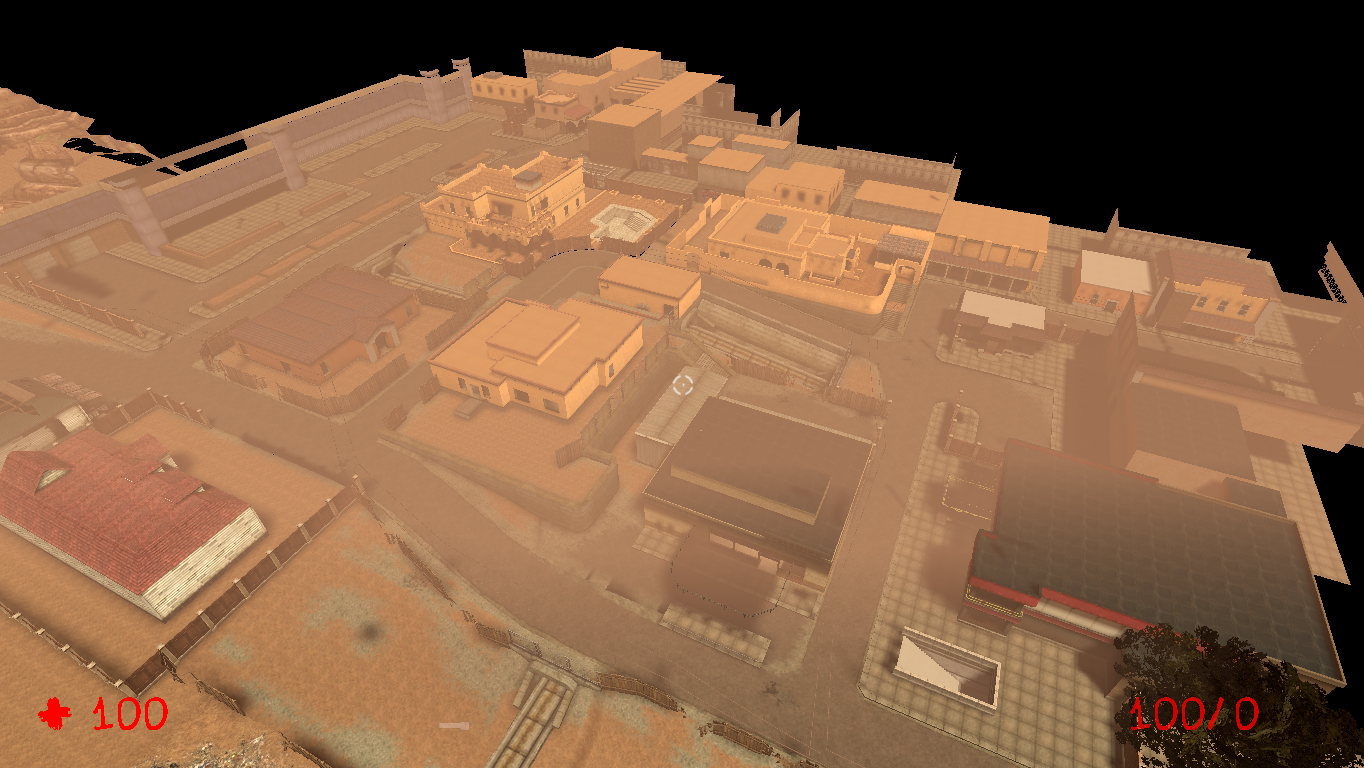 This is the second smallest area that was gonna be in the game but the most detailed one, here you would do four missions : The porn shop snots patrol (which was gonna be shorter), the bodyguard mission but instead of the mega mall you would do it in the huge mart, a local zone with clothing stores, food, flowers and other stuff. You would also do the dog pound mission and finally the cat hunter mission, in this one you would end up unlocking the new area called Hub02 or as the Town Square which was bigger and better, very cool looking area, but we will go into it in a moment. Hub01 also had more interiors than in retail Postal 3, there where 8 enterable buildings including the gas station and the employment agency, the zone was very big and in the future I wanted to add a metro system like it was intended back in 2008. 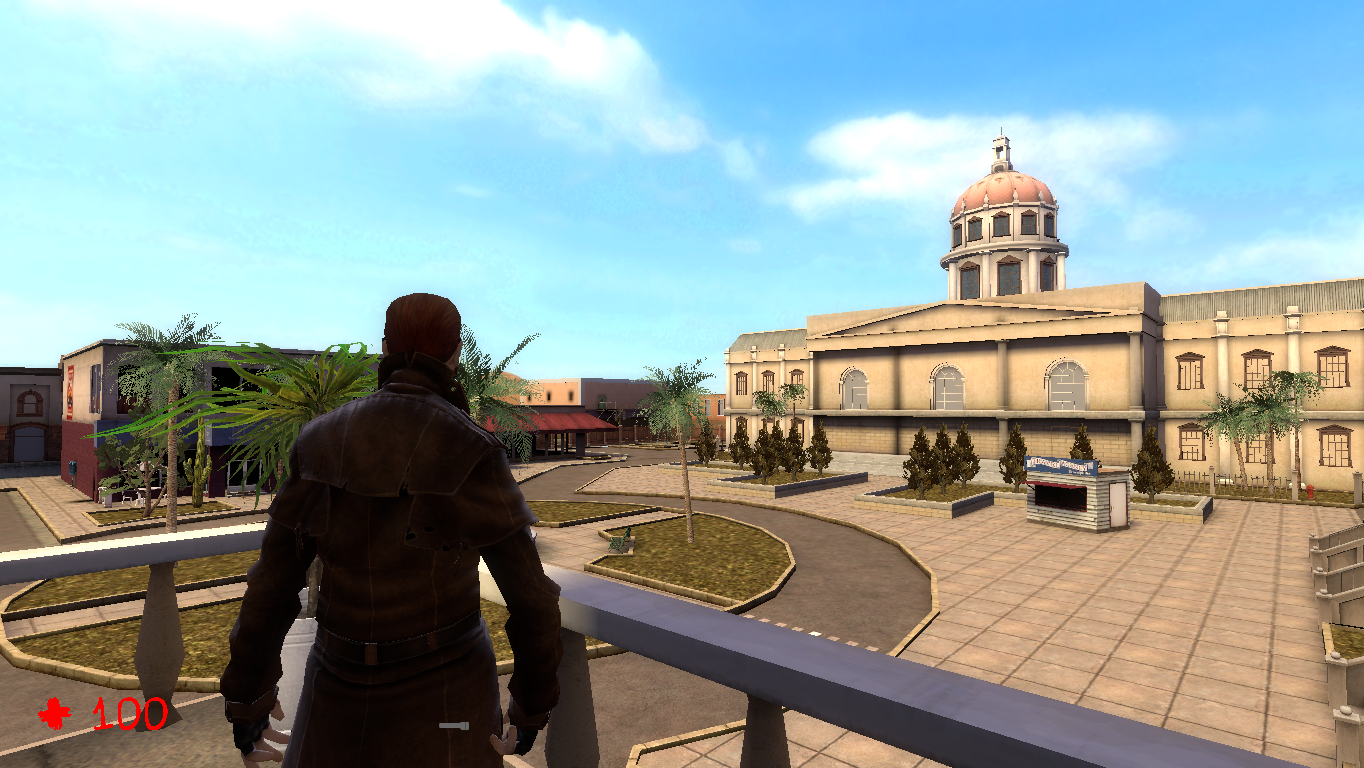 This was my favourite map and the biggest one in the entire mod, it inclouded to 18 buildings with interiors and I can't say too much about this area, here we would have a dealer who would sell special weapons and also a vietnamese restaurant where we could sell collected cats and also the segways shop... We better don't talk about the 4 coffee shops around this area... But it was great to explore.

There where some more maps but it's not worth showing them all since they are very unfinished and have nothing interested like this maps above. 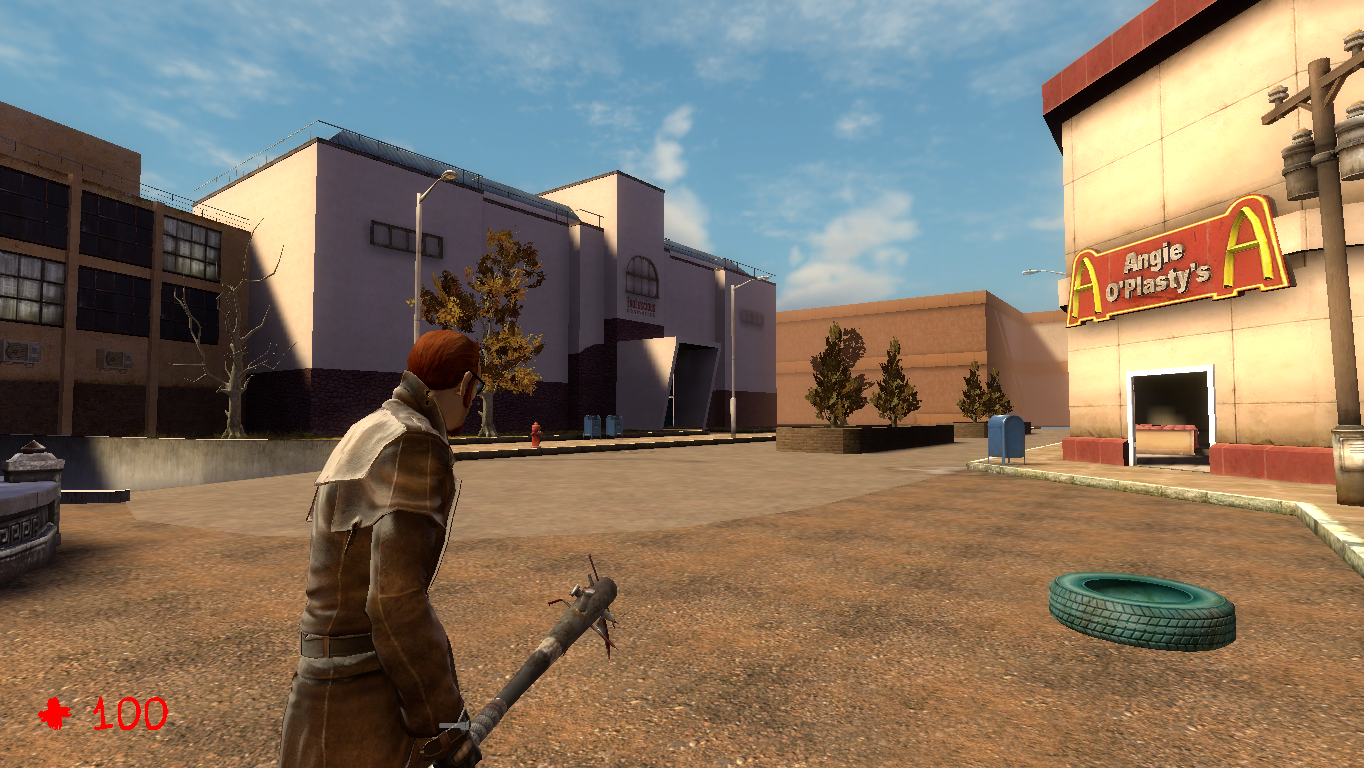 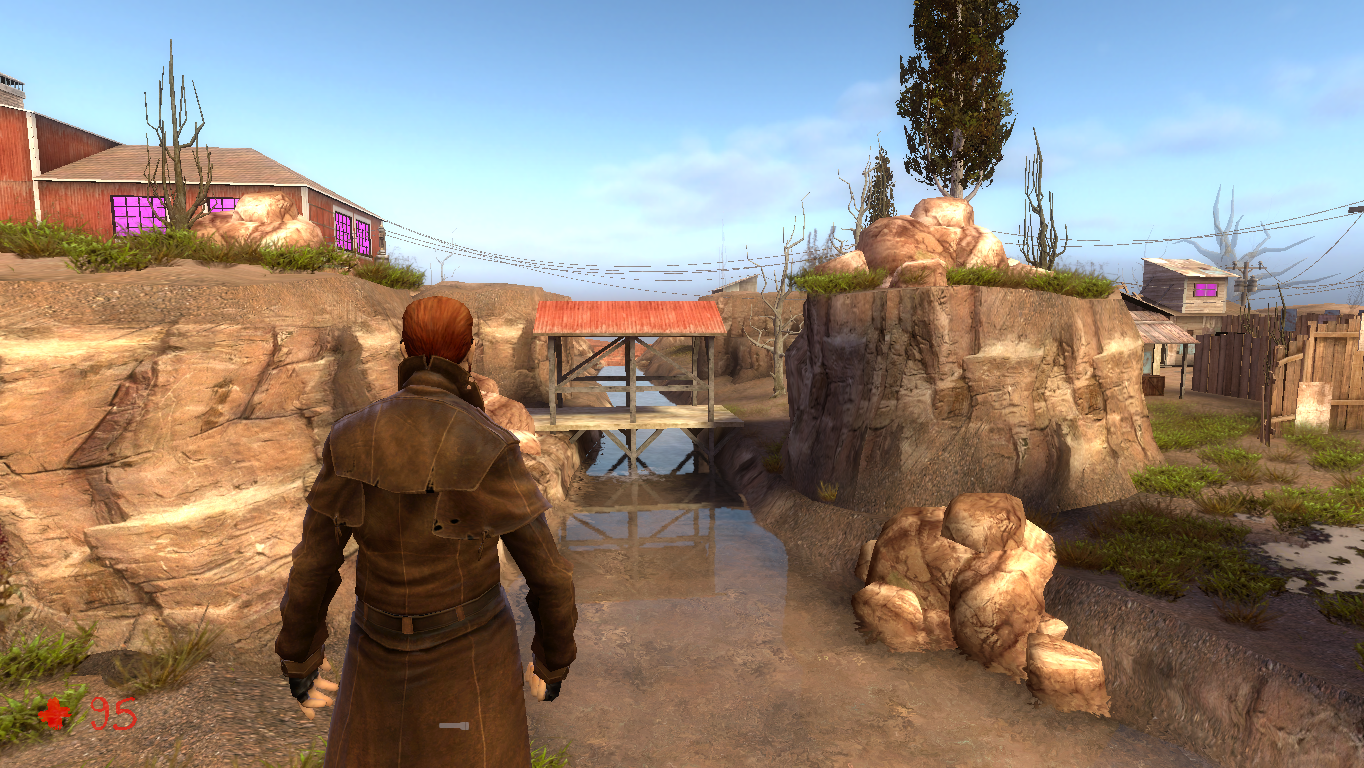 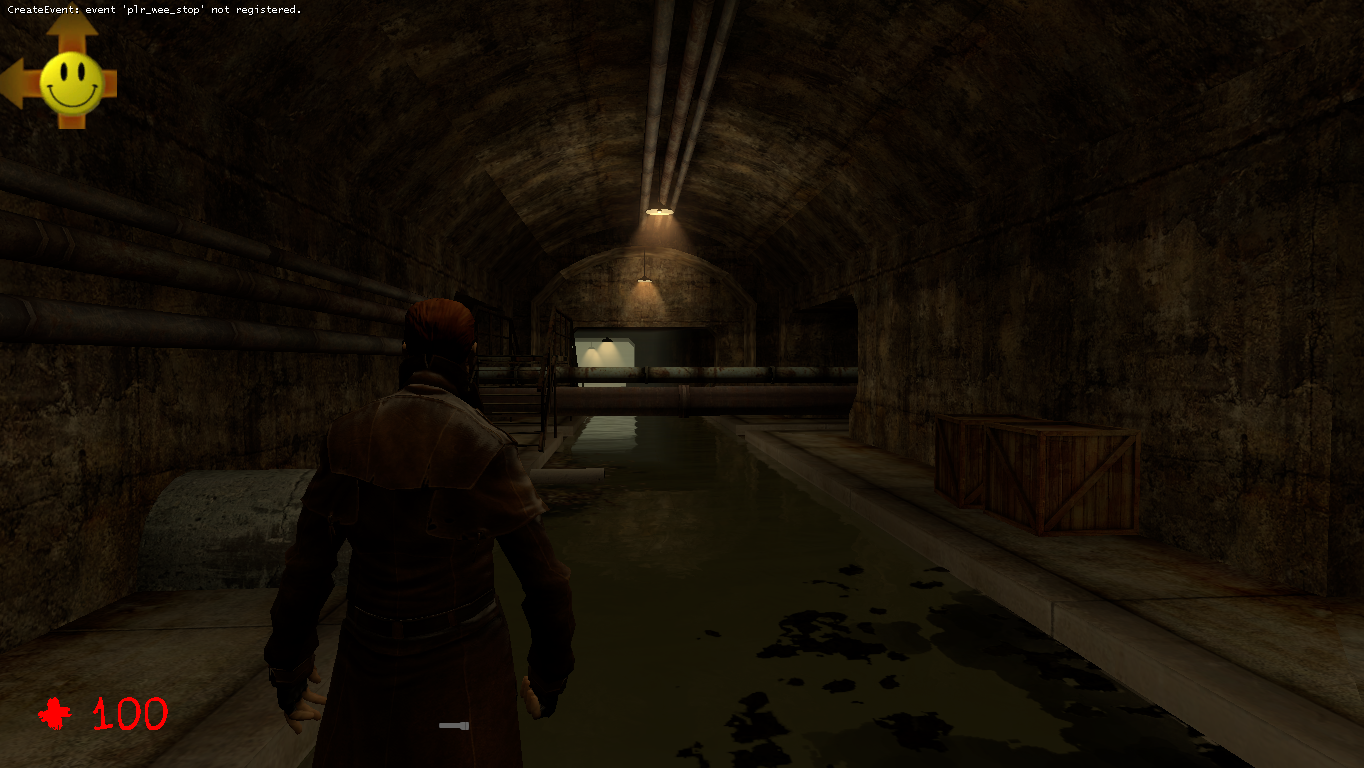 A lot of maps where done but by the time I didn't optimize them so they where a shit tone of unoptimized mess... Worst than Postal 3 itself.

The last updates and what I achieved to do

I keeped working on P3A for one more year, upgrading maps, adding bits of Postal 3 code... And what I achieved? How far I went? Not too much

- Fixed the badger weapon attack stages (but the badger itself doesn't correctly do the animations).

- Fixed the player not aiming to the center (but stills broken).

- Added some weapons like the bat, the M60 bullet chain now has an effect that makes the bullets disappear when shot, the deagle animation state of attack and relax now works, even for other weapons like the Sniper Rifle and the M60.

- AI now works the way it should, they get scared and all of that (but they don't attack with weapons that aren't melee).

- Added fluid system (but only works with the pee and not with the gasoline).

All the P3A videos I have uploaded

P3A test gameplay of all weapons

When P3A was a Postal 3 mod

This video is very different, but has a place in my heart, this was a prototype where where gonna play an alternative version of Dude that had lost an eye and had Amnesia.

Before P3A was about the Alpha of Postal 3

Images I found writting this article

The first time I introducced P3A as a 2008 restoration... 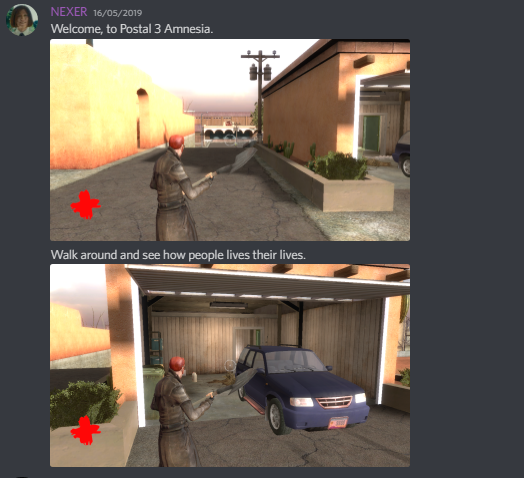 P3A when I tough about making it a zombie game... 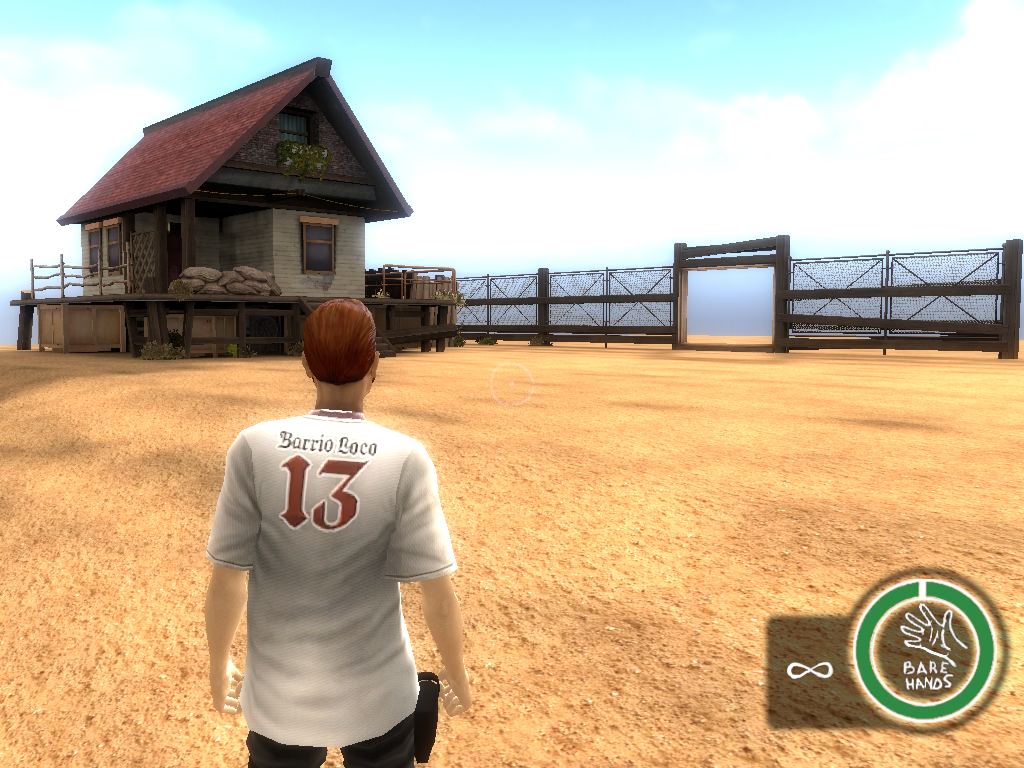 And even when I tough about making it a remake of Postal 2... 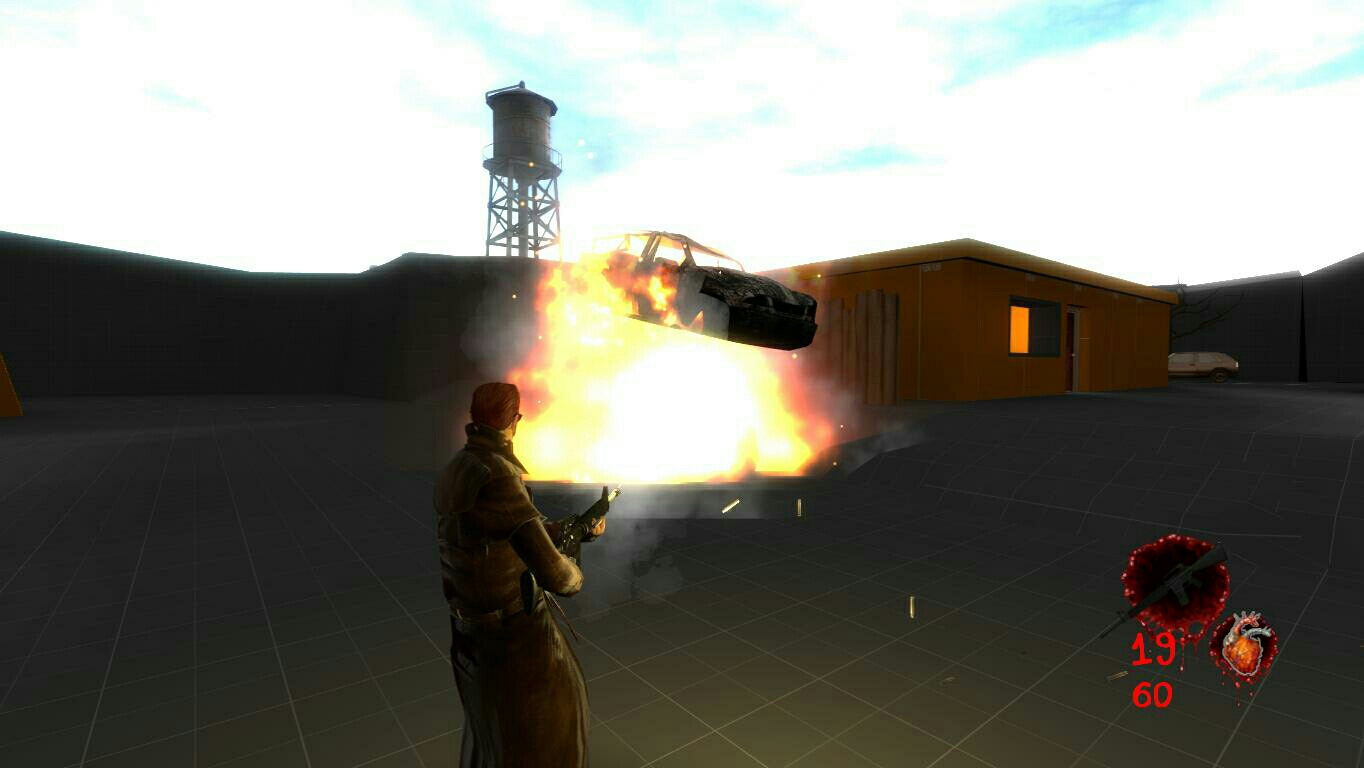 I was able to add all this cause at this time I was learning and I still learning C#, I knew what one thing was, how it worked, how to port it, what it's function was for but I'm still in process of learning and some stuff on programming sound chinnesse for me, that is why I wanted to badly a programmer and that driven me mad. But I showed all this, I talked about all this because I wanted to talk about it, I needed to take this step to continue out of this project and what I did while working on it... this is a goodbye to all Postal related content and a new start to me. I met people, I started something new and I will focus on that because I have now people around, people that invest their time and together we do what I couldn't do because of the lonelines and anger I felt working on P3A... A long journey that has to end.

Thank you everyone, and we'll see again in the future.

Devlog 1 : Our current state (Talking about the progress that has been made).

The code is free to use too, add weapons, edit stuff and play it all in the p3a game base

After long work, the project got cancelled. Why? Some bugs, programming and optimization. So, as a final option. I chose to release it in his Alpha state...