In Postal III, The Postal Dude emigrates to Paradise's sister town of Catharsis as he previously blew up Paradise with a nuclear bomb. Due to the economic meltdown, the Dude drives into town and becomes stranded because he can not afford a tank of gas. He must then find work and do various odd jobs to escape the town. 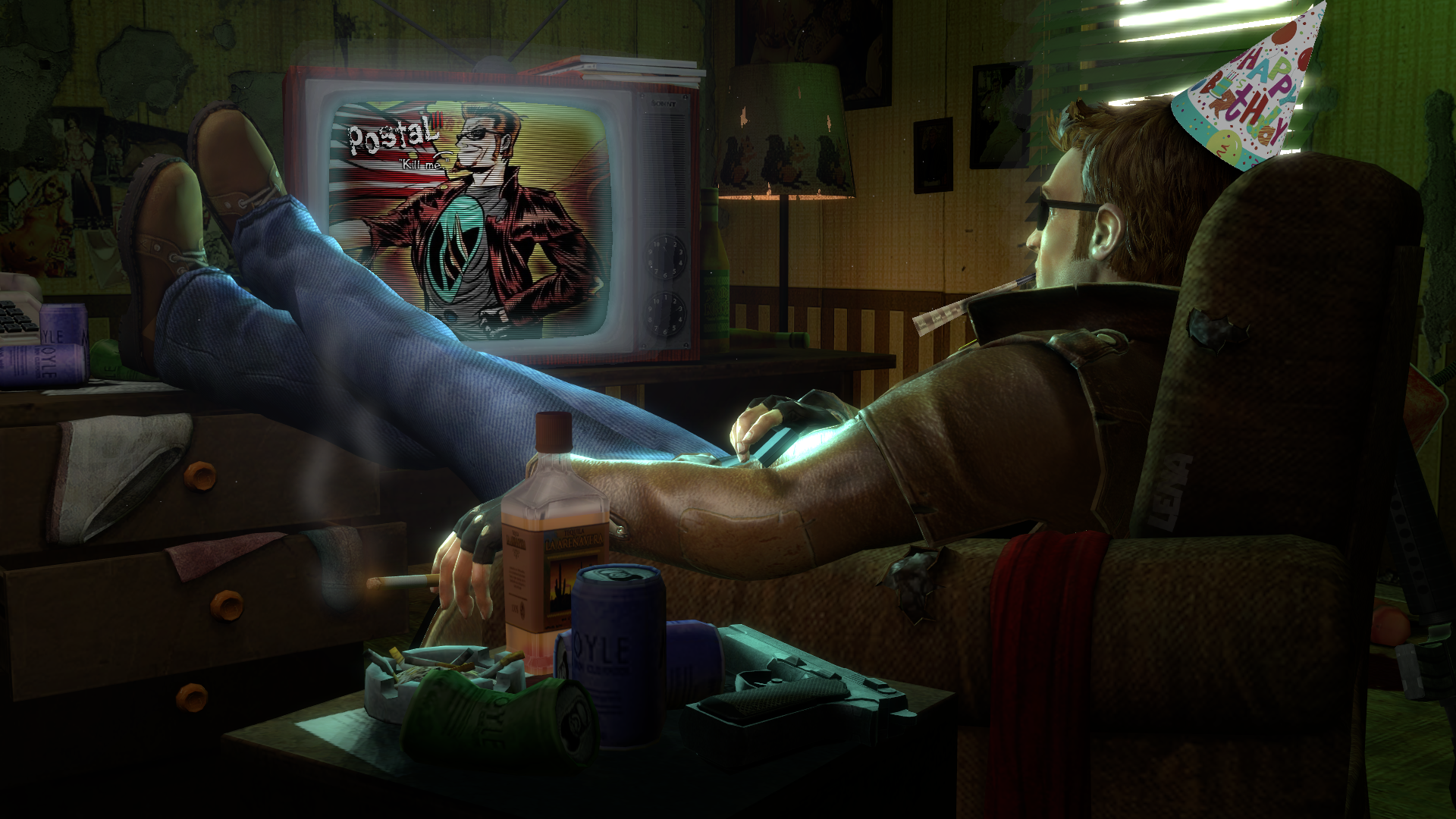 So folks, it's been 10 years since Postal 3 first launched in Russia (the Steam release for international audiences was just under a month later), as most of you know by now it was a highly ambitious game that went through an extremely turbulent development cycle in the middle of an economic crash and came out to the disappointment of many fans, being branded the black sheep of the franchise; The end product turned out to be a game some people loved, some people hated and other people found just a little bit mediocre, maybe you'll commemorate this anniversary by giving the game a try, or by pissing on its box in that well remembered easter egg from POSTAL 2's Steam edition, or maybe you'll let the day pass you by without much care at all, but regardless of what you might think of Postal 3 our mod and our team wouldn't wouldn't be here without it, so we as a dev group certainly have something to be grateful for today, even if the game's inner workings can be a real pain in the ass to deal with a lot of the time! 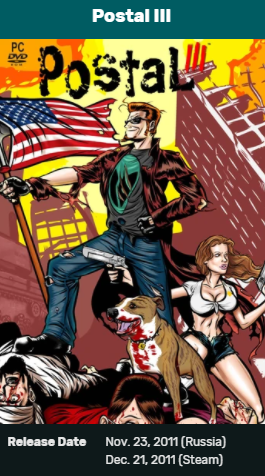 So, to mark the occasion we're putting out a new devblog with some more info about what we as a team have been up to with Catharsis Reborn, we were originally going to put out an update in the form of an in-depth long form video, but ultimately decided on a devblog because, as we've mentioned before, these are much easier to put together and get the message out to you all, while a video requires lots of time for writing, gathering footage, recording narration and ultimately editing, time that could be better spent elsewhere. Anyway, since now is as good a time as any to jump in with another point by point explainer, let's get to it!

As can be seen on our YouTube channel we recently put out a new gameplay trailer, here's some of the key features displayed in it in case you missed them:

- NPCs can now survive dismemberment, in Postal 3 dismembering an enemy would only lead to an alternate death animation, in CR NPCs can now keep on going with dismembered limbs for some time and will eventually either die or pass out from blood loss, if they lose their legs they will writhe on the ground in pain while losing arms will provoke them to either run away screaming or try to carry on attacking you, some particularly ballsy Pistol wielding enemies may even try to carry on shooting you as long as they still have an arm left to hold their gun! 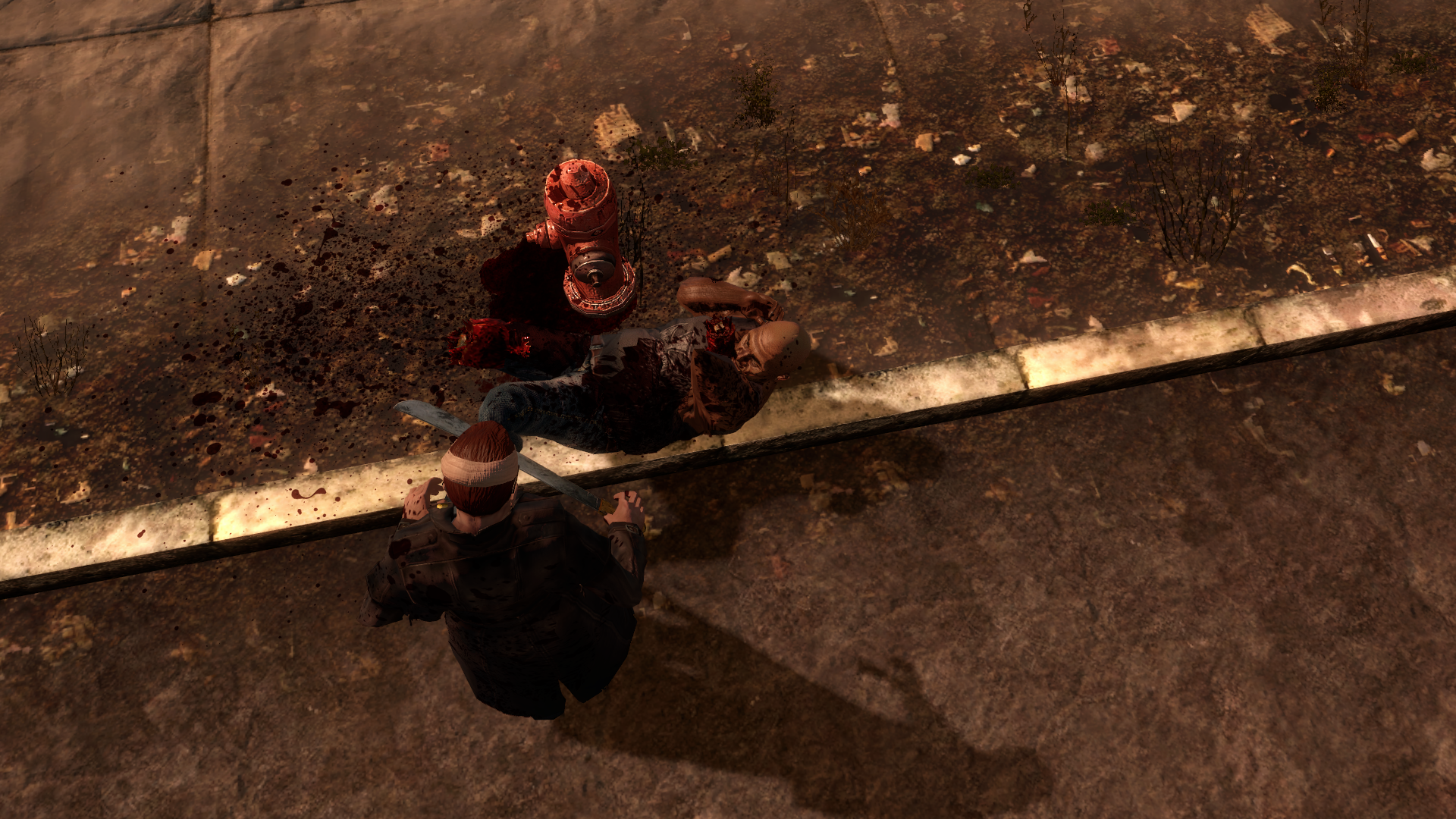 - The M249 from Postal 3 has been brought back into CR as an extra weapon alongside CR's M60, it has new sound effects and textures (a desert camo as opposed to P3's grey camo) and changed weapon stats (much higher fire rate and ammo count in exchange for lower damage, a foil to the M60 which has been given a much slower fire rate in exchange for high damage and a small ammo belt)

- Beyond its use for directing animals, the laser pen can now be used to blind NPCs by flashing its light in their eyes, briefly stunning them (and turning them hostile if they weren't already, so don't go zapping people's retinas out if you don't want any trouble on your hands) 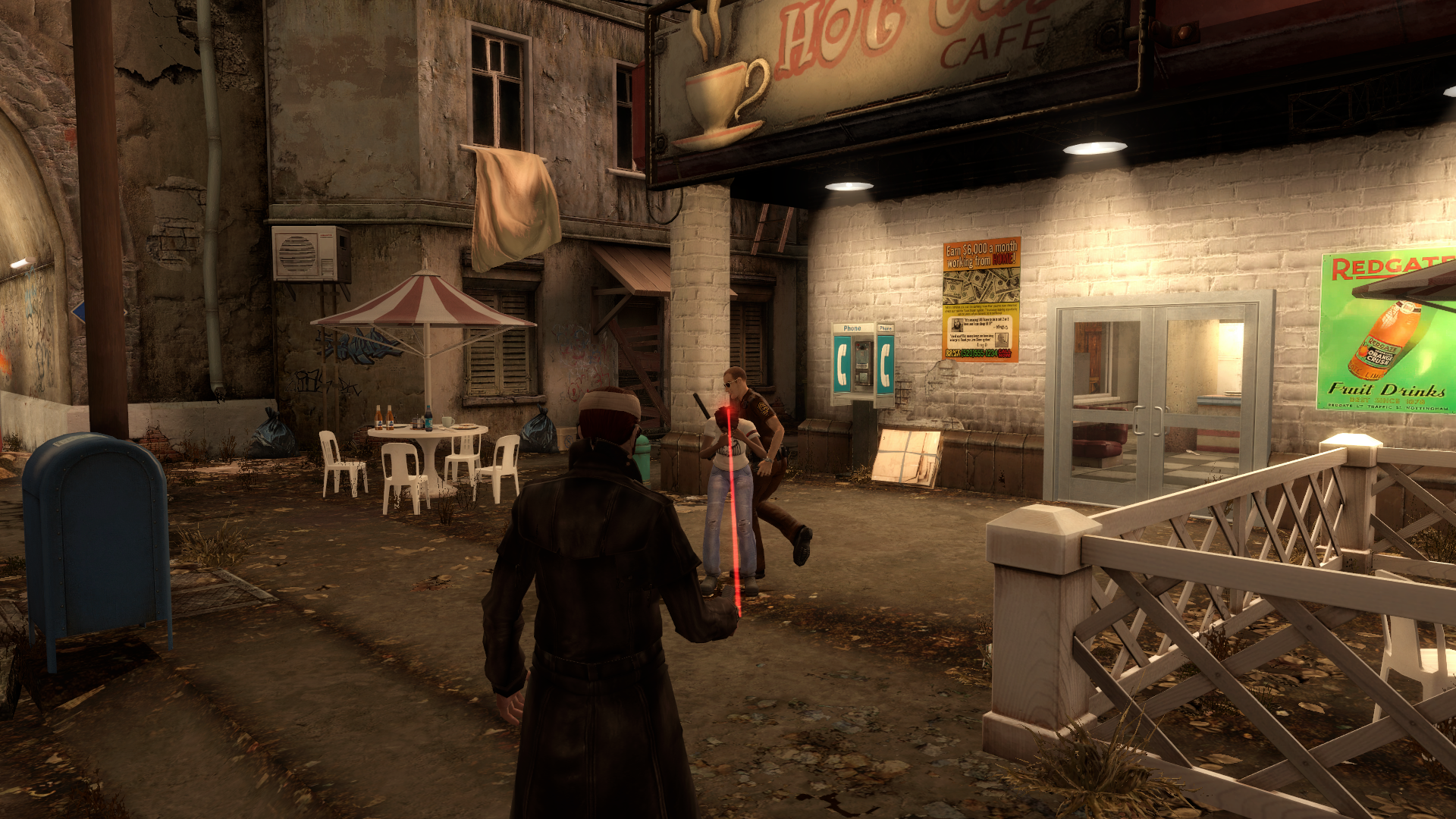 - Gas trails can now be lit on fire by shooting them alongside the regular method of using a match, allowing the player to set off fire traps they've set up from a distance, getting the drop on passing Cops, gangsters or the plain old everyday civvies you decided to turn into a roast dinner that moment 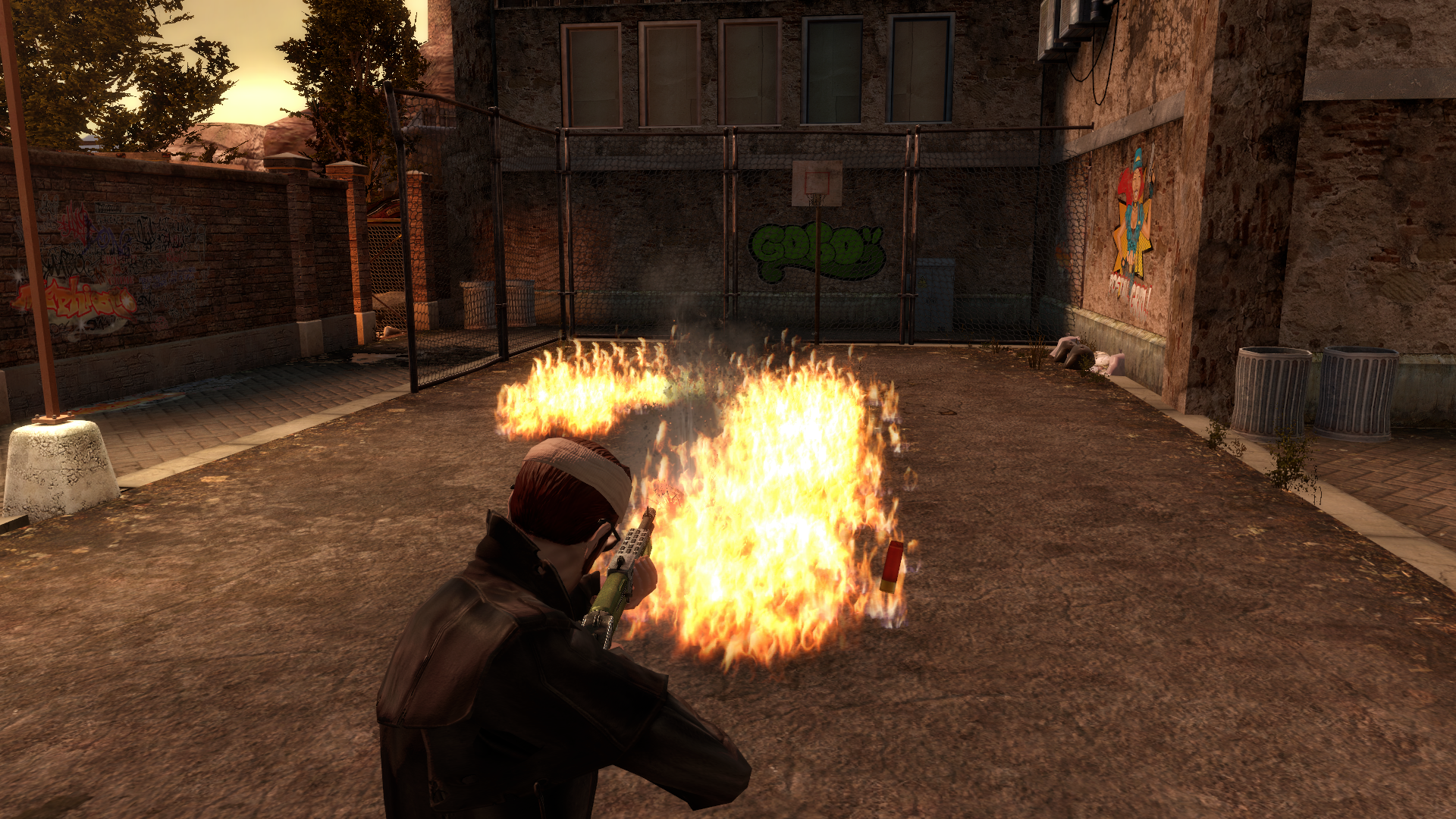 - Punch attacks are now non lethal, meaning you can beat the everloving shit out of someone without coating your hands in blood and compromising a no-kill run, the same goes for the Cop Baton, giving players some extra options for more pacifistic runs of the mod, a well aimed Baton throw can even act as an instant KO as long as you don't mind having to play fetch in the aftermath 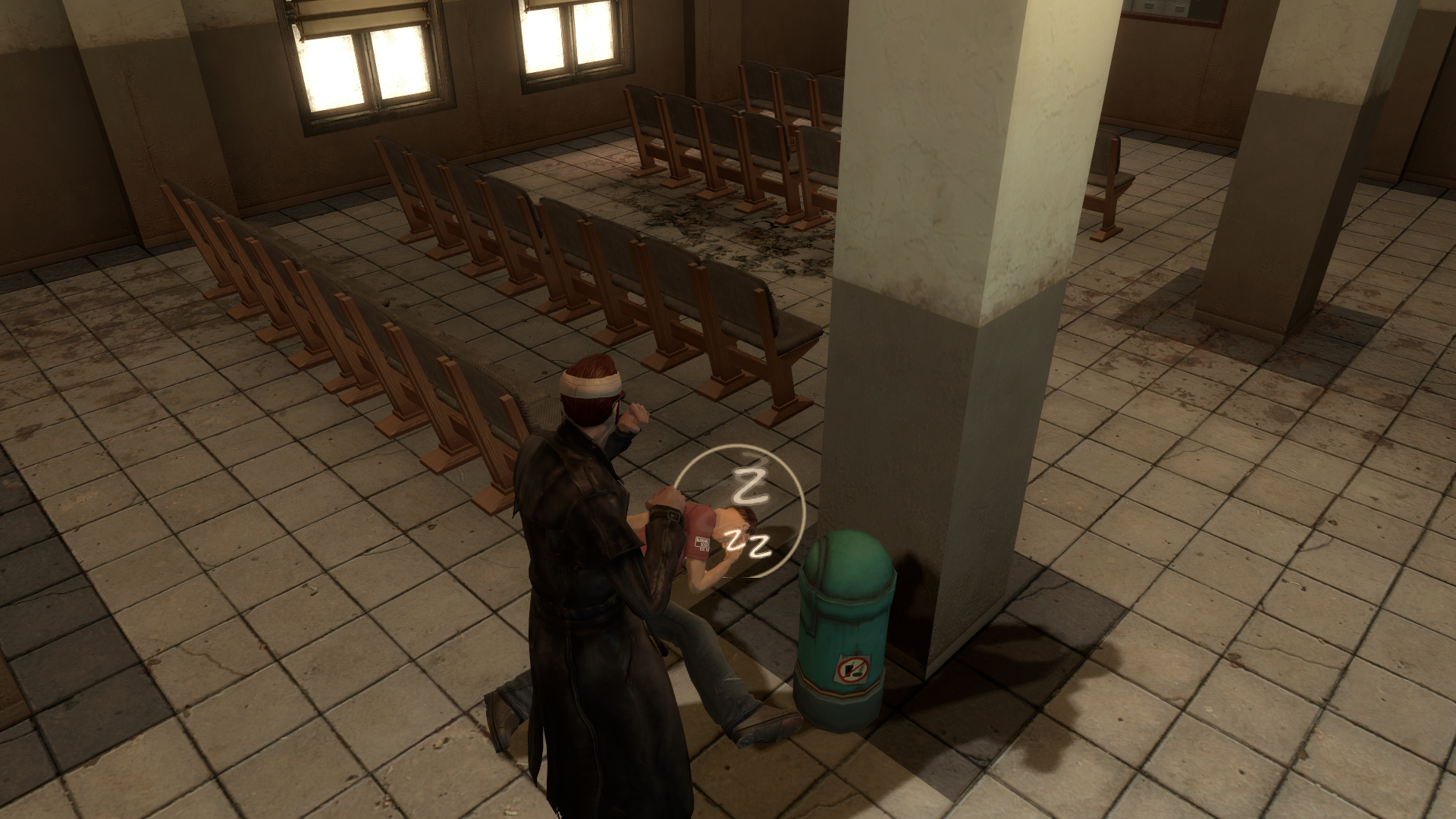 - The mod now has a dedicated insult/threat button, use it while pointing at an NPC and if unarmed the Dude will give them a nice little "fuck you" for their trouble, much like giving the finger in POSTAL 2 Paradise Lost, if armed the Dude will threaten them similarly to Vanilla POSTAL 2's "get down" button, just keep in mind that this can bring about a similar reaction to wafting your laserpen about (hint hint: not a friendly one) 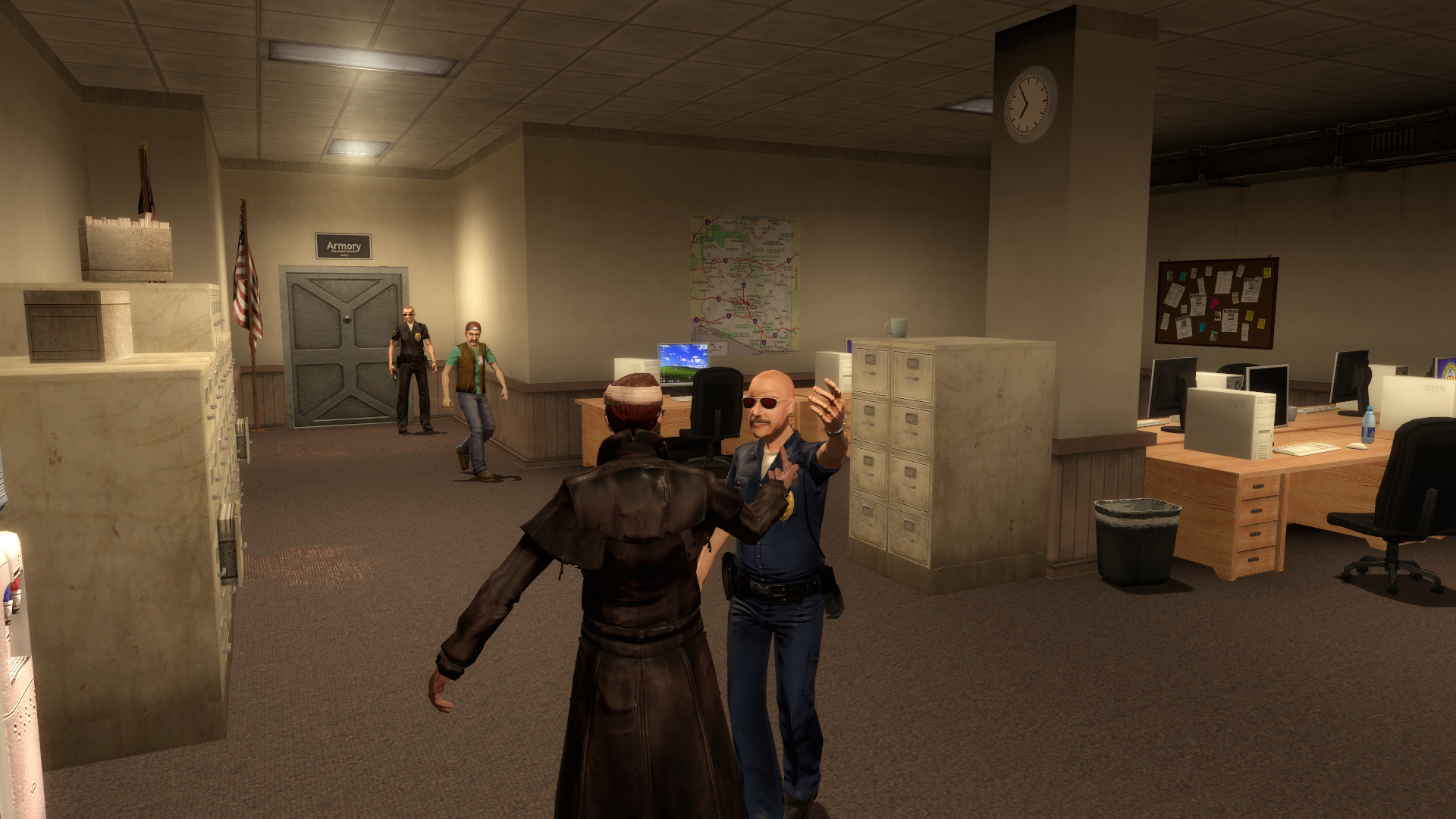 Other examples of progress worth noting:

- 2 new drug pickups have been added, Steroids and Adrenaline, which can be found hidden in a few spots across the maps and each have their own unique effects on the player, depending on when you use them they can either help or hinder your performance in combat

- The artwork and editing for remaining 2 Demo cutscenes has been completed, though some alterations and improvements to the cutscenes will be made over time

- With the cutscene art out of the way some extra work has been put towards mapping recently, with 2 new interior areas added to the world: 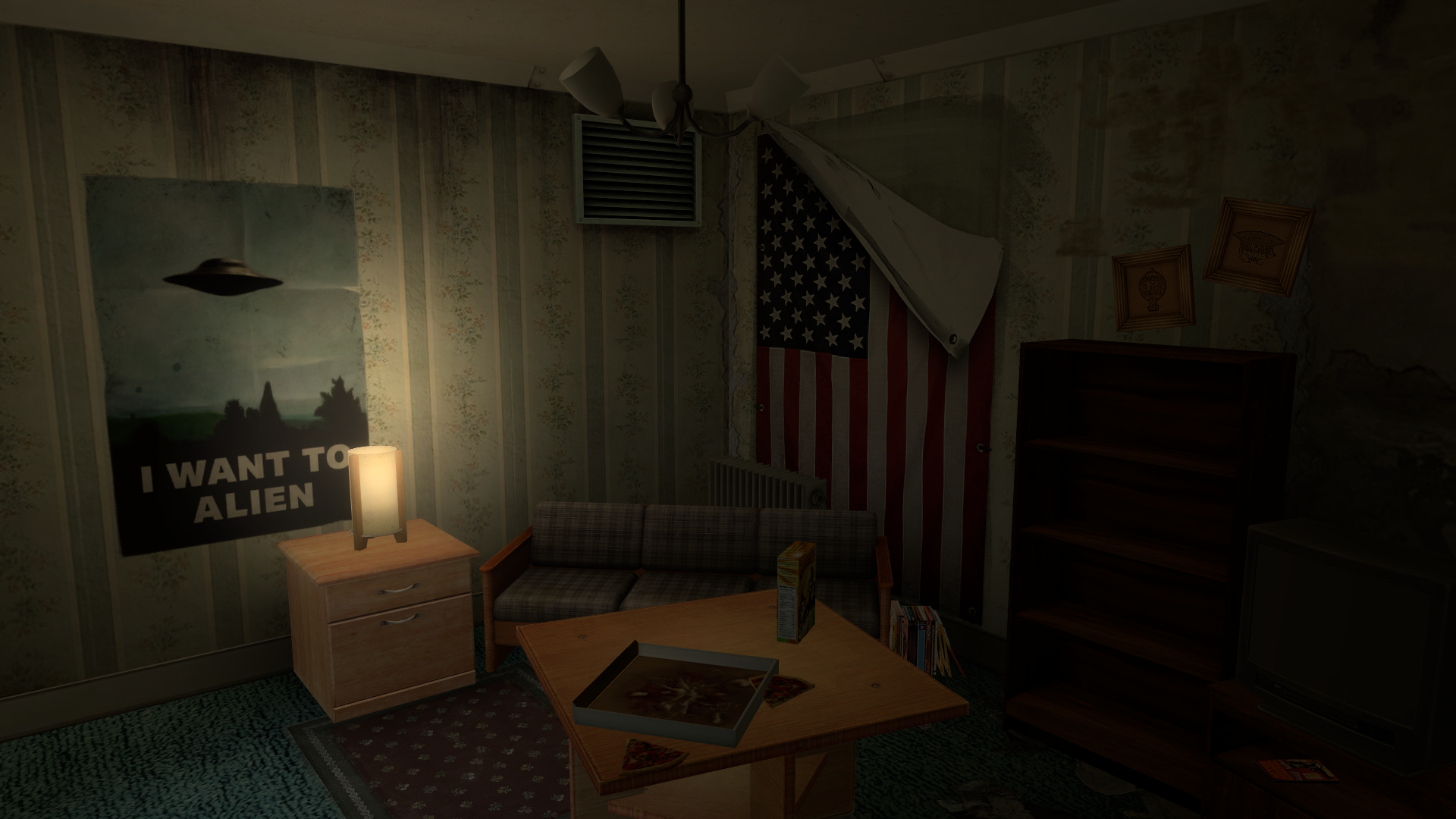 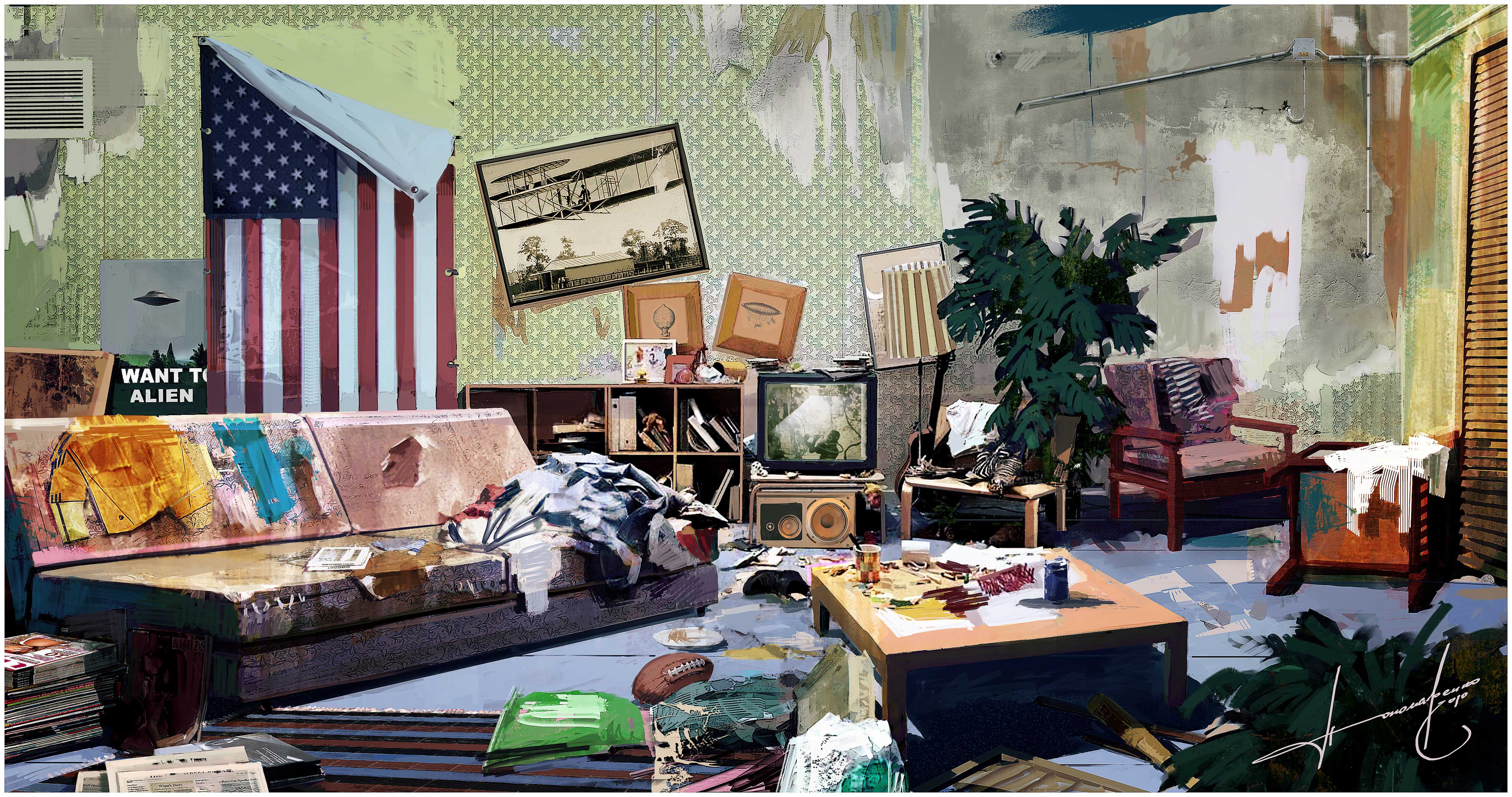 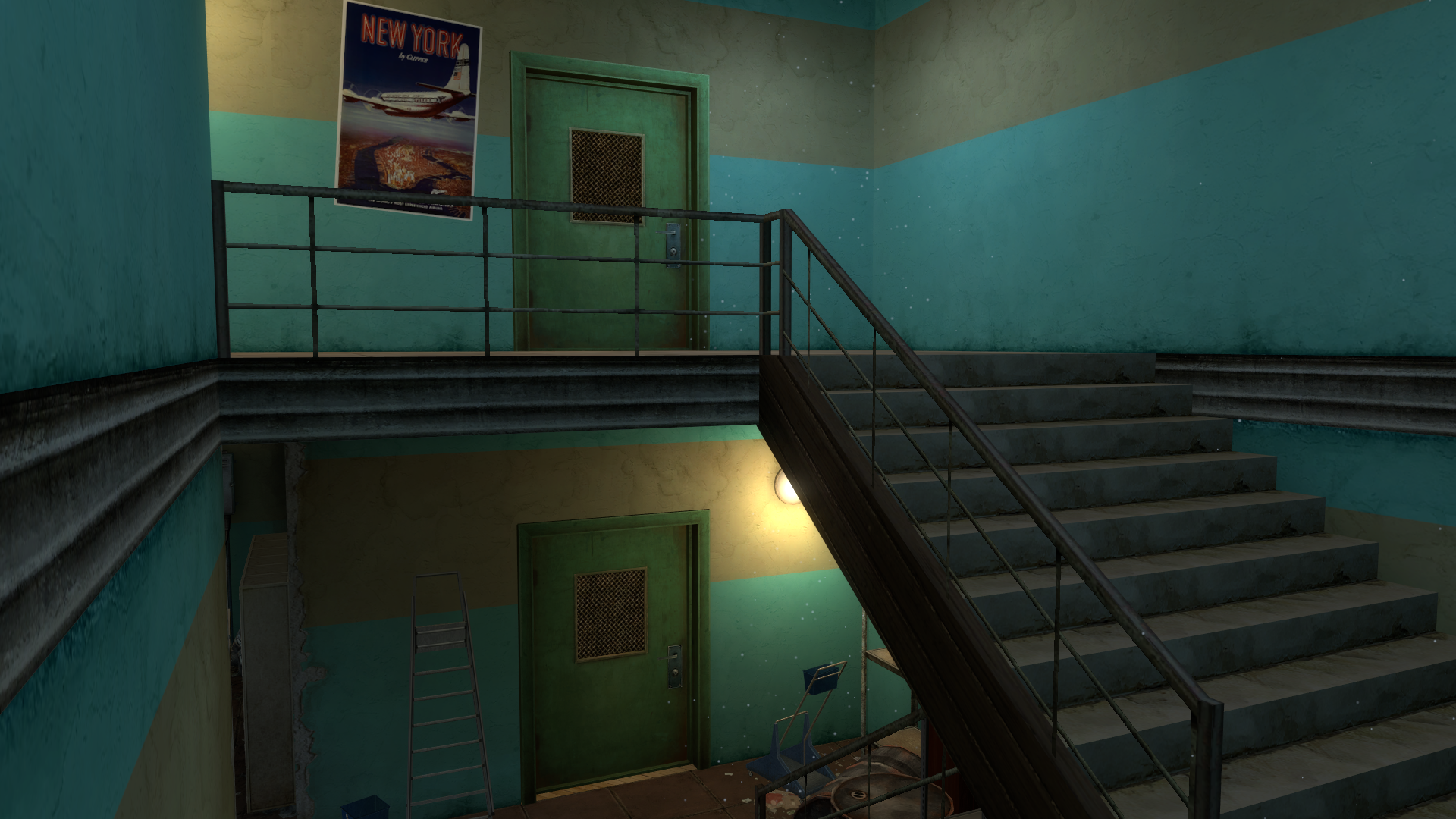 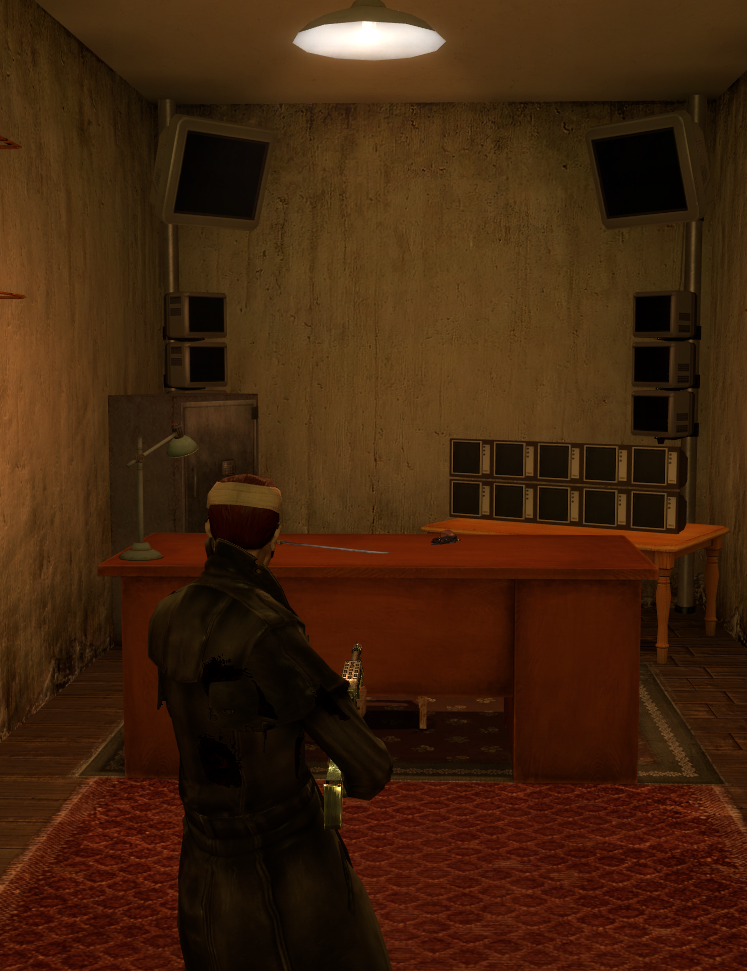 Both of these maps are interiors connected to buildings that were previously unenterable, serving only as decoration and boundaries for the world, now they'll act as extra side areas for players to find some new powerups and expand their arsenal; A third map, much more linear in nature, that is designed to be exclusively accessed during a mission has also been implemented and will include various different paths to navigate and puzzles to solve in the process. 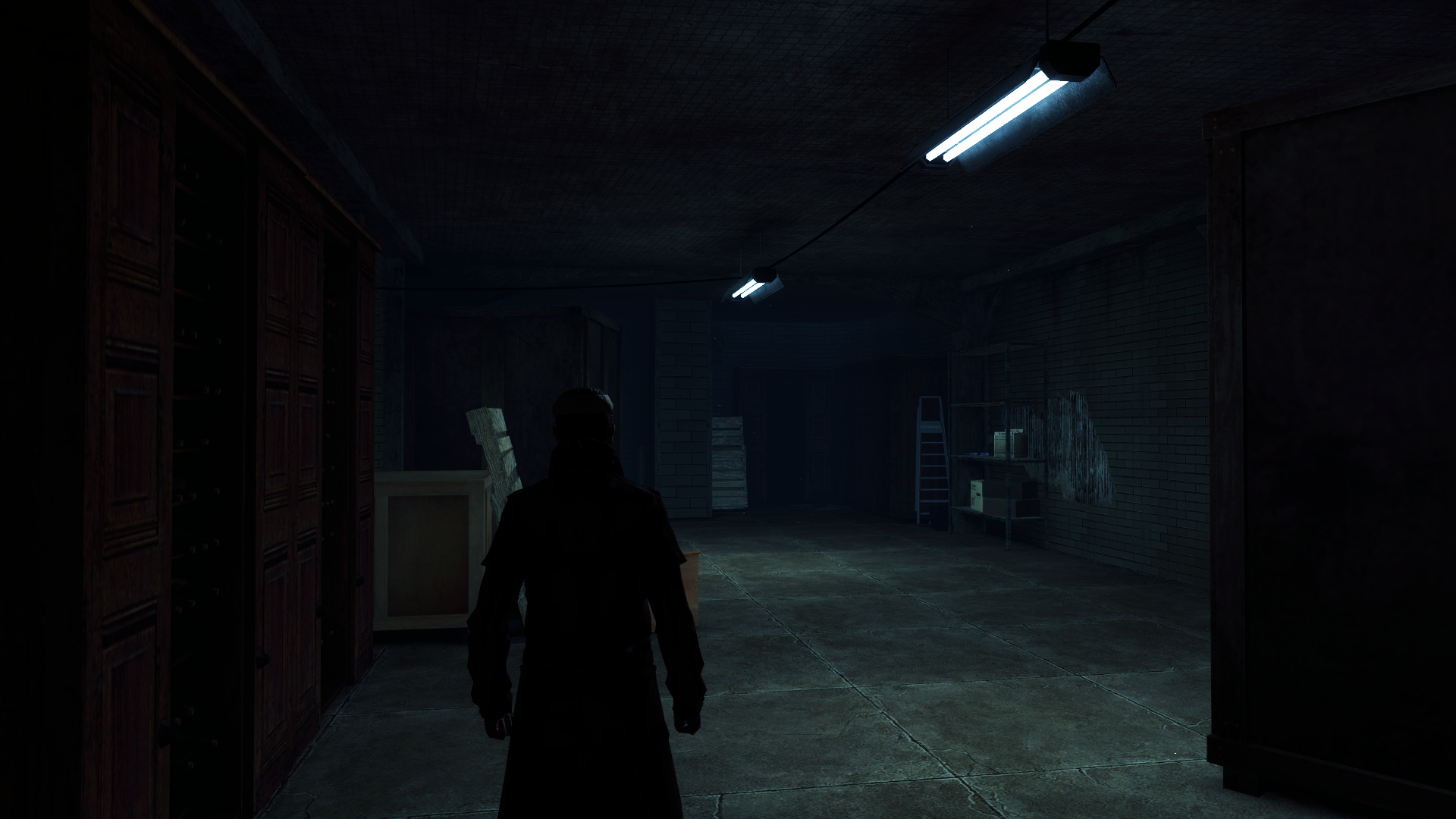 Existing maps have also received extra detailing, features and pickups to make them more worth exploring and we will continue working on them over time for some extra polish, though for the most part they're in a state where we're happy with them as is.

- Last but not least, as per usual we're also carrying on with the process of bug fixing, numerous bits of jank have been smoothed over lately and we've also gotten rid of lots of nasty crashes, some new test maps and debug tools have also been created to make the process of patching out issues and experimenting with new features that little bit easier

Overall we still have some work to do on the polishing front: Some issues with hud scaling need to be resolved (some of the hud elements move out of place on really high resolutions), some annoying bugs still need to be squashed and we have some more additions being worked on that aren't ready to show just yet, but we hope this was an interesting update for you all and that you'll enjoy/have enjoyed watching the latest trailer, thanks again for your continued interest and support and we wish you all the best for the holidays!

Devlog 1 : Our current state (Talking about the progress that has been made).

Well hello there, it's uhhh, us again, back with another update. And this time, it's being conveyed through the means of this awesome website known as...

Installation along the way with throwing and replacing files. Example, root folder is Steam\steamapps\common\Postal III

An update to the Gore mod made for Postal III, what else can I say?

This mod allows you to run and explore maps and levels from a build subsidized in 2007-2008, in the original, release Postal III, without downloading...

This is Version 1 of the Postal III gore mod, it's finally out and ready for you to mess around with.

The code is free to use too, add weapons, edit stuff and play it all in the p3a game base

Install the No-DRM fix. Verify integrity of game files through Steam. Play. In that order.

so sad this game was turned to ****. I'm glad to see that people are recreating it though. :/

Please, someone create a mod to correct all the bad **** in this game

Dec 20, it comes out on STEAM. I've played the Russian version, and it is sweet! Mike Jaret from Running With Scissors said that if Half-Life 2 and Portal can run, than Postal 3 will run perfectly, but that's not true. H-L 2 and Portal run perfect on my machine, but Postal 3 is very very choppy, even with all the graphics turned all the way down.

Just a little comment... We Americans, would never EVER go to Mexico... Canada beats mexico, so if this were to ever happen, thats where we would go. I mean which makes more sense, America to **** country ( mexico ) , or America to Ok country ( canada )?

If this will be better than postal 2 i will love this game!

Awesome, can't wait to see what Racist jokes and crude humor are in this game :D one of the jokes from Postal 2 made me laugh, Terrorist store keeper and his war cries XD