Our type of “old school” is a very different breed than the type encountered in today’s “old school”. Yes, there are similarities; We too have upped the action, speed and gore, but not to the extreme lengths seen in the new Doom game. Our levels are built for exploration, progression and environmental puzzles. These are our main qualities. Phobos is closer to games like Half-Life or Dark Forces/Jedi Knight in spirit. Just like Classic Doom, these games are types of First Person Shooters that have all but vanished. We truly are a different kind of oldschool.

As Lead tester on Phobos, I've been asked to write this Devblog about our testing process, what goes into it, what comes out of it, and, more often than not, goes straight back into it again. It's a constant cycle of improvement and refinement, which can be fairly gruelling at times, but is pretty rewarding.

As Lead tester on Phobos, I've been asked to write this Devblog about our testing process, what goes into it, what comes out of it, and, more often than not, goes straight back into it again. It's a constant cycle of improvement and refinement, which can be fairly gruelling at times, but is pretty rewarding.

What goes into testing?
Playtime. Quite a lot of playtime. Most recently we've been nearing the end of Phase 1 on a lot of maps, which means they're getting rigged up for combat. What this means to me is playing through a lot of the same sections multiple times, working with a fellow team member Caffeine to try and get the right balance of challenge throughout the maps. Sometimes this happens quite quickly, Caffeine will set something up and it will be great first time. Others involve a lot of back and forth, changing the number of enemies in an encounter, or swapping them out for different ones, over and over until it feels great to play, and most importantly, feels right in the map.

Quite a lot of attention to detail also goes in. While we're not at the incredibly nit-picky stage of Phase 2 yet, I also keep a constant lookout for graphical errors, stuff like texture problems and other things that aren't exactly show stoppers, but aren't up to the level of quality we're aiming at. When we're ready to go back over the maps with a fine tooth comb in Phases 2 and 3, I'll bring these things up, in an effort to produce the best quality work that we can.

What comes out of testing?
First and foremost: A much, much better game experience. While the work that the mappers do is really very good in the first place, the process of having someone look over what they've done with fresh eyes really helps bring out any problems. To give an example, one of our mappers added a small section to a map recently, and when I came to test it, the new room stood out from the rest of the map - it wasn't the same standard, and needed more work. I gave this feedback to the mapper, and after a couple of iterations, it came out not just looking as good as the surrounding areas, but better. See below for before and after shots. 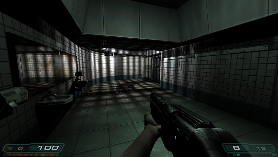 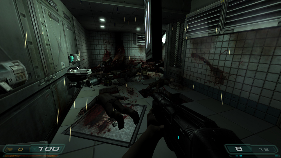 And straight back in again...
Nothing is ever perfect. Especially in a huge project such as this. While I can lock off a lot of things right now and say they are “good enough” for Phase 1, I know that I’ll be going back to a lot of the same things in the latter stages of development, and seeing what can be improved. We’ll have to be careful not to fall into the trap of endless refinement; but I think we have a good grip on what is “enough polish”, so I think we’ll be okay there. It will be interesting to have a larger testing team later in the development, to see how the decisions I have made fare against much fresher eyes.

Testing Phobos is a massive double-edged sword, for me. On the one hand, it is a great chance to get in and see the project, see the awesome stuff the guys are doing with Doom 3, and see it all as it unfolds. It’s also great experience for me as someone hoping to get into Game Design as a profession. The downside, of course, is that I’ll never be able to play the final product with a completely fresh perspective. Some of the magic will be lost, and that’s a shame. However, the brilliant feeling you get when you put out a great product, knowing you had a hand in it, is well worth it. I’m sure all you guys out there working on your own projects know exactly what I mean.

While we’re still a good stretch away from releasing Phobos, I’m already proud of the contributions I’ve made, however small they are overall, and I’m looking forward to bringing it home as a quality product that I would be happy to pay money for.

Can we get some higher resolution pictures?

I'm leaning to that the one on the left looks the best.

<-- Biggest DooM fan in the world and I just wanted to say that the time and effort that you all are donating into this mod is amazing. I can't wait to see the final product of the awesomeness that is Doom 3: Phobos.

How many cycles of testing do You usually do? Aren't You afraid that doing more cycles may slow down developing or cut some stuff that isn't as hard as it seams to be? That You will fall into Duke Nukem Forever category where developing turn into constants recycling?

What is Your definition of well balance on maps?

As for before/after screen shoot I wouldn't remove that mirror from wall. Picture two is better - got more details.

We go after our phase schedule concept that we described in an earlier devblog. So I guess those are the bigger cycles. There is some smaller cycles going on, but those are not really taking that much time away from development as we are doing them simultaneously in the current phase. Next phase will get much more testing and tweaking heavy.

A well balanced map is really hard to describe. It really depends on the map, and how the flow is etc. Again I can't really go into detail here.

understood no detail like plot or gameplay video, still one part of me is curious a lot while other one do not want spoilers.

i just hope it wont become some "never coming out urban legend", as some other mods. could we see some videos of some finished maps, OR a video about how the hell do you guys use those lightnings so awsome?

To me, this mod feels like the "Black Mesa: Source" of the doom 3 community.

Aside from that, it looks great.

We currently don't have any plans on releasing any gameplay videos just yet. We don't want to give away too much, and things might still change before a release.