What is No Escape?
No Escape is Half-Life 2 Single player modification that uses the Orange Box engine including Half-Life 2, Half-Life 2: Episode One and Half-Life 2 Episode Two.
What is No Escape about?
After many wars between the humans and the combine most of the technology is destroyed so people and combine join forces against the only unaffected enemy - the undead.
Of course not everyone is so happy about having the combine as a friends and you are one of those people.Your goal is to escape the prison you are thrown in and make your way to the freedom.

Keep in mind that the mod is going to be pretty short in terms of gameplay time - no more than one hour or so. Our team is very limited so we focused on making quality gameplay and new content rather than just long, boring and repetitive mod.We used many pre-made materials such as the weapon skins, where the license allows us.Check out our website for more details. 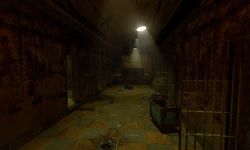 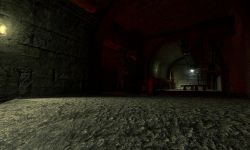 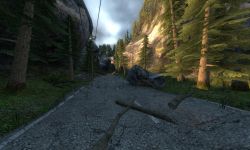 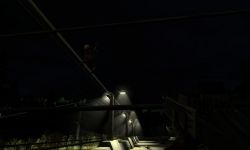 As promised, our media section got updated, just few days before the release. Keep in mind that those images are pre-final.

This is the archive with the full version of No Escape. For mirrors, check the mod description

I'm trying to play No Escape again after a couple of years, and
never got the 2013 Fix installed. I installed it, and again, the
switch that should open the Emergency Bunker door does not move all
the way down when I 'use' it.
The walkthrough I looked at indicates the switch should come all
the way down, but it only comes down part of the way.
Should I do something prior to throwing the switch.
One thing I've thought of before, is: if I use sv_cheats 1 and use
god mode and impulse 101, does that interfere with the operations of
things in a level ?

Thanks, and good mod.

Ok, after applying the fix and then starting the mod over,
the switch still will not come down all the way.
I have to use sv_cheats 1 and noclip to get through the
door.

Hold on...I tried the switch again, and it took several
tries, but but activating the switch several times causes
it to come lower and lower each time, so after about
8 or 9 tries, the switch comes all the way down, and the
light changes to red, and the bunker door opens.
Sheesh.

It is rare for me to uncover something on the web thats as entertaining and intriguing as what you have got here. Your page is sweet, your graphics are great, and whats much more, you use source that are relevant to what youre saying. That you are undoubtedly one in a million, well done! bdacffeacbdgacad

Review:
Now, i don't know if this was a serious project or just a hobby, so i don't want you to take this too much seriously, i don't want to offend you guys because you did an excellent job! And i wish this will help you for your next project, because id really like to see more! Nice job, really.

.Cons;
- Lost: i found myself lost many, many times.. and this was because you didn't give me, the player, much information about what to do and my next objective.

- Fights: you didn't bring nothing new to the game, fights were a little boring.. even if i enjoyed the plot twist of civilians shooting at me, that really got me, nice job.

- No bosses: i was expecting a hard battle when i first saw the russian elicopter, but i was disappointed when nothing happened.

- Story: not really much lore there, i didn't get who i was, where i was, why i ended up in prision, why the enemies were shooting and me and more important why i launched a nuclear bomb over a city.

That's the flaws i found, and it's really a shame because this mod looked awesome while playing it!!

.Bugs: I didn't find many bugs, just on the second map the lever wouldn't go down and the door wouldn't open up, and a big pipe on the ceiling had invisible textures.

Thank you if you read this, i really hope this will help into your next project, because as i said, i really want to se more from you guys!

"Can't find background image materials/console/startup_loading.vtf" This annoying thing keeps popping up whenever I start the game. How do I fix this stupid thing.

maby deleat the items in the bin folder

****! for some reason i have all sdk bases but i dont have hl2 episodic games! WHAT THE HELL STEAM?

Short but really fun and extremely well designed. It's an all out slaughter with no allies.

Single Player
Tags
Embed Buttons
Link to No Escape by selecting a button and using the embed code provided more...