It's time for a long overdue status update. Featuring some new screens of the planned faction starting positions and addressing some critiques.

It's been a while since I did an update and there's much to discuss. The main thing being we have been trying to fix or address some of the issues people pointed out on the campaign map screen. Before I show you guys our answer, I want to say that we are somewhat restricted by where cities are and some decisions we made were because of that problem. So keep that in mind upon viewing this. 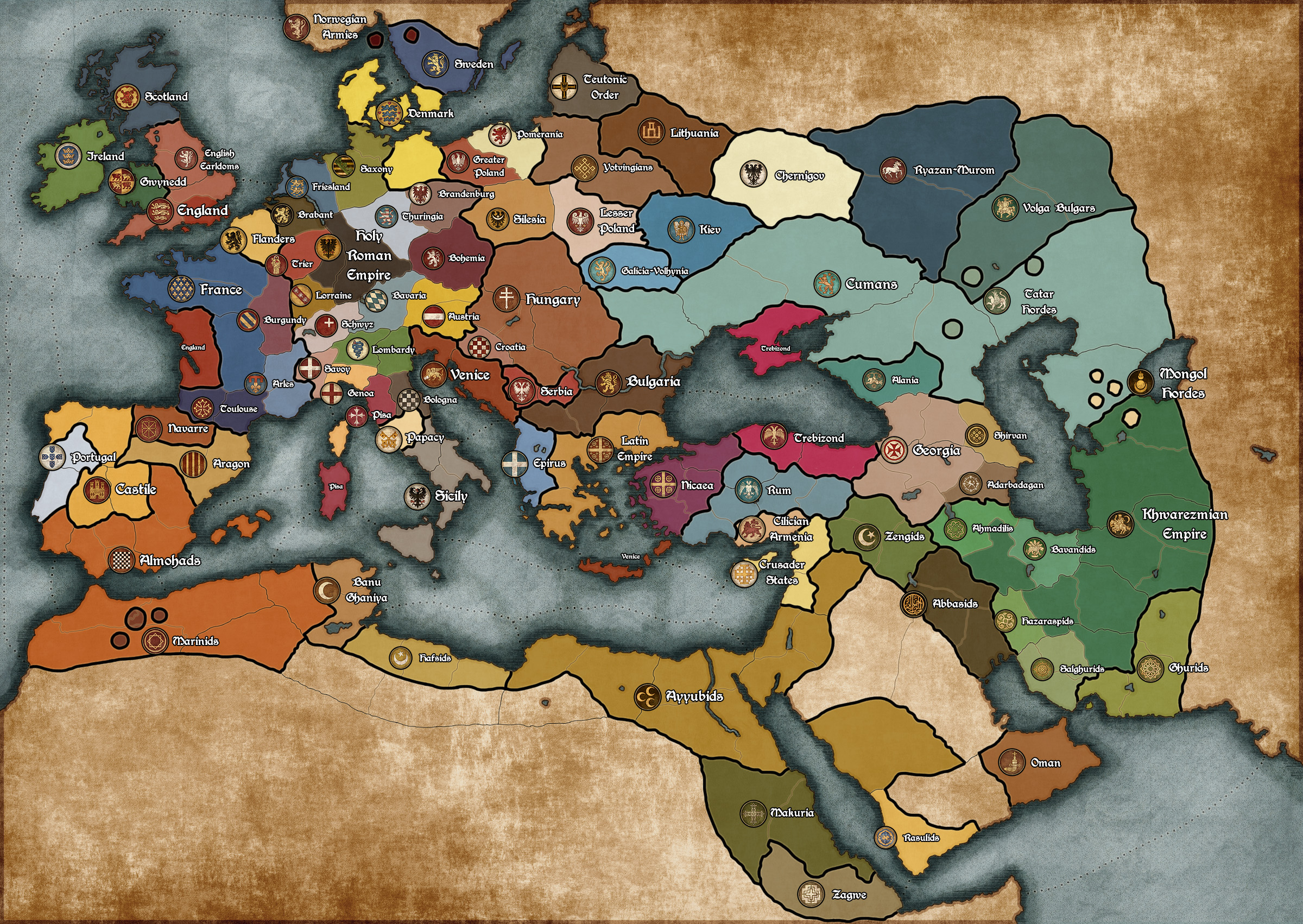 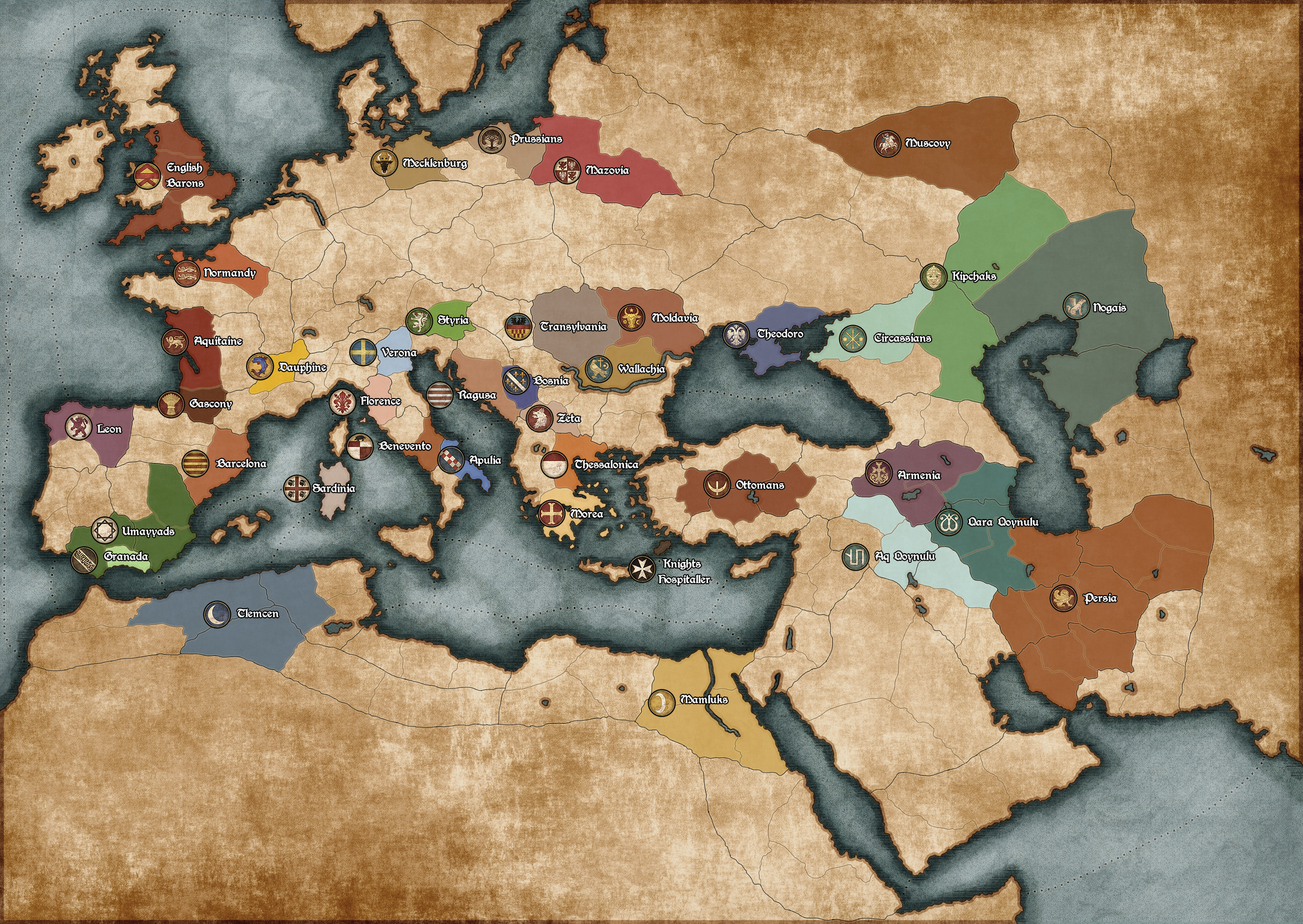 I hope between those two maps we satisfy most of the issues people brought up. We took out Bosnia and Leon to make things more accurate position wise for Serbia and Castile/Portugal. However we added in Brabant, Bologna, Thuringia, Norway(Kind of) and other horde factions like Tartars. We also fixed that little thing with Georgia, ;) Massive kudos to Jan for making these maps as well as these faction icons. I'll post a screen of the icons in the screenshot section.

Also we will be releasing a preview build for YouTubers in a few weeks so stay tuned for lots of coverage of MK. Anyways, I think that's it. Let us know what you think in the comments below but please note that these maps intend to be final in concept and we would prefer to keep it that way this time.

Hungary is made very unrealistic, for example: Esztergom is bigger than Paris by area and magyar rebels in this region lol, correctly slavic rebels, magyars were in Pecs and Veszprem.

If this game ends in 1453, shouldn't the Kingdom of Naples be in the South of Italia? And by then, Aragon and Castille should both be larger. Just curious, I've seen those territories so differently between so many games

I know, but it ends in 1453. And if there are emergent factions, shouldn't Naples be in there by the end of the campaign?

it doesn't work that way, buddy

Then what are Emergent factions in this game? what is the point of them if you can't play them?

The fact is that nobody knows exactly...the history is subjective, every chronicler wrote what he liked

ALL ABOARD THE HYPE TRAIN BOYS!!!!! Please deliver on this mod guys, if this does indeed turn out to be as great as it seems now. This will undoubtedly rival the popularity of the Third Age mod for Medieval and breath life into Attila.

Things you should do guys : a norwegian army in northern scotland, (this one is something you could not try , but making the mamlukes "migrators" would be fun as long as they were mercenaries around that time), replace the teutonicorder with the sword brethern (also known as the livonian order) but dont delete the teutons totaly, as long as they bult some fortreses in wallachia and transylvania, making them "migrators" will be more fun and more historicaly acurate, also a question, poland is a bunch of vassals all one province cant have a ideea who is vassalal to who, also it could be easy to become independet as long as your leader is 1 province and you 2 (lest say silezia takes control of pomeriana) , also in 1212 england had no land in normandy ? To the emergent map, the ottomans apeard around nicomedia (sorry if im rong but is that province from anatolia right next to constantinopole ), i could be wrong at tthe ottoman part but they sould have some land giving them acces to the black or egeean seea. Those are all my questions and advices, btw your work is legendary, cant wait to see the resoult.

Hm. What religions will be in the game? Any Pagan factions? Any factions that can CONVERT to Paganism? (Eg Denmark)?

This is looking amazing. Thank you guys for all your hard work. I can't wait to stop playing stainless steel and move to this hahaha

Will there be any way to modify a coat of arms of an Earldom easily to create your own Earldom, based on others around at the time, such as the Earl of Northampton, Warwick, Kent, Oxford etc.

As a Brit it would be nice to play the character I play in medieval re-enactment. William Debohun 1st Earl of Northampton :)

No, as there is no way to implement in-game editing. It would require modding tools and expertise sadly, as this isn't CKII (though it seems to by strongly inspired by it...)

Hello, i see there are only "Crusader States" any chance of you splitting this into Kingdom of Jerusalem, Principality of Antioch etc?

why is the crown of England not in control of their entire territory? France i can undestrand but england was a unified kingdom with some vassals not a patchwork of vassals ruling on a king

I suppose it is meant facilitate the recreation of the rebelion of the barons and go all Robin Hood on John's butt. Sure, England was more of a unitary state, but in practice, the Barons and Earls where at times very unruly, and England has quite the history of being shaped by these uprisings.

Does that mean Bulgaria will be playable?

This mod sounds interesting...looking forward to play it

Why did you take out Bosnia?

Wrong. Bosnia was autonomous of Hungary. If Hungary really owned and controlled Bosnia then Bosnia would've never became a Kingdom in the 1300's.

Good but that one thing with Georgia is not fully fixed it would be very good if you would fix it please... where Alania is on that map is not actually where Alania was that is region of Abkhazia which should also be part of Georgia as it is historically and ethnically also Georgian land and in that time too ofcourse. Alania should be more in the north,one of two bordering regions of kumans and tatar hordes or maybe both regions that would be much more correct... and also in that time Shirvan, Alania, Adarbadagan were vassal states of Georgia and also Trebizond empire which was created by Georgia and was under influence of Georgia for 3 centuries. This is map of Georgia in that time Upload.wikimedia.org

Yup. The rulers were descendants of the Gerogian monarchy and depended heavily on Georgian military support.

Please make the province borders a bit more accurate if you can. Many country have seriously strange and inaccurate borders. If you can't do it, don't mind with this comment :)

When will this campagin will be out witout buggs ?
And say to me that hungary stays, cause if it wont it wont be historicly accuret :)
THX!!! AND PLS ANSWER !!!

And thx guys MY DREAM WAS FOR YEARS that sine medi 2 i cloud play as hungary(my own cauntry)so thx 1 billion time for this cool looking stuff you make me cry :)and the one question is when this will be playable ? i would make gamplay XD .oh and desa vu XD

and also in the emergent factions map its good that you did not put szlovákia because their cauntry only esiste from 1945 so THX! (im not resist only a hungarian and we hate those who steb us in the back)

youtube channel:
Youtube.com
cuold u give me built too ?

What is Doynulu? I tried researching it but it didn't work.

Qara Qoyunlu, do you mean? They were a wave of nomads called the Black Sheep Turkomans (Qara=Black as in Qara Qum, Black Sands/Desert) who invaded Persia.

Hey i m going to be getting attila soon and was wondering are you going to be making Sweden a playable faction?

Can we play with the Bohemia kingdom?

So when will campaign be playable?

Will there be factions for the Kurds and Armenians. Would be really disappointing if they are not included again given their historic importance towards their surrounding factions in the Middle East.

really hope for a kurdish faction would be great!!!

hey there,so what about the non-coloured regions which don't have a faction ruling it. would they be still works in progress for more upcoming factions or would they be rebel settlements?? thanks