After many months of tireless work, we're pleased to announce a massive new content update! Gear up for three new mechs, three new maps, heavy machine guns, and a ton of bugfixes and adjustments!! You can now experience the Battle of Tukayyid!

Attention, MechWarriors (and tankers and aerospace pilots and infantry or elementals)! Prepare to disembark from dropship - we have arrived at planet Tukayyid!

On 1 May 3052, the largest single engagement of forces in the history of 'Mech warfare began. Twelve armies of ComStar's Com Guards clashed with twenty-five Galaxies of Clan forces on the hills and plains of the planet Tukayyid. The prize for this battle was the glittering blue gem of the Inner Sphere, the home of humanity: Terra.

It's finally arrived! Updates 0.11.0 through 0.11.2 are out, and available for download and installation through your launcher as always. These updates add a good deal of new content, and fix and tweak lots of other stuff! It's been quite a while since the last big updates dropped, and our apologies for the absence of articles on here lately, so let's dive right into what's new.

After months of headbanging, tearing our hair out and staring at code, we've done it; we've successfully reverse-engineered the process of adding original and new mech legs to new mechs! This means that, from now on, you can expect new mechs in the future to come with their own legs instead of repurposed ones from older designs. And speaking of new mechs, you'll find not one, not two, but three in this latest storm of updates! Spheroids get the Commando light mech, and Clanners get the Locust IIC light mech and Hellhound (or Conjurer, for you trueborns) medium mech! All of these mechs are the first in a long time to have their own unique legs! As a little cherry on the top, some of these mechs' variants feature a new weapon - the Heavy Machine Gun! Intended for short-range engagements while firing considerably slower than the standard Machine Gun, the HMG can deliver significantly more damage per shot. It does overheat faster than the standard Machine Gun, but when in groups it can be rather terrifying to Battle Armor and lighter assets! 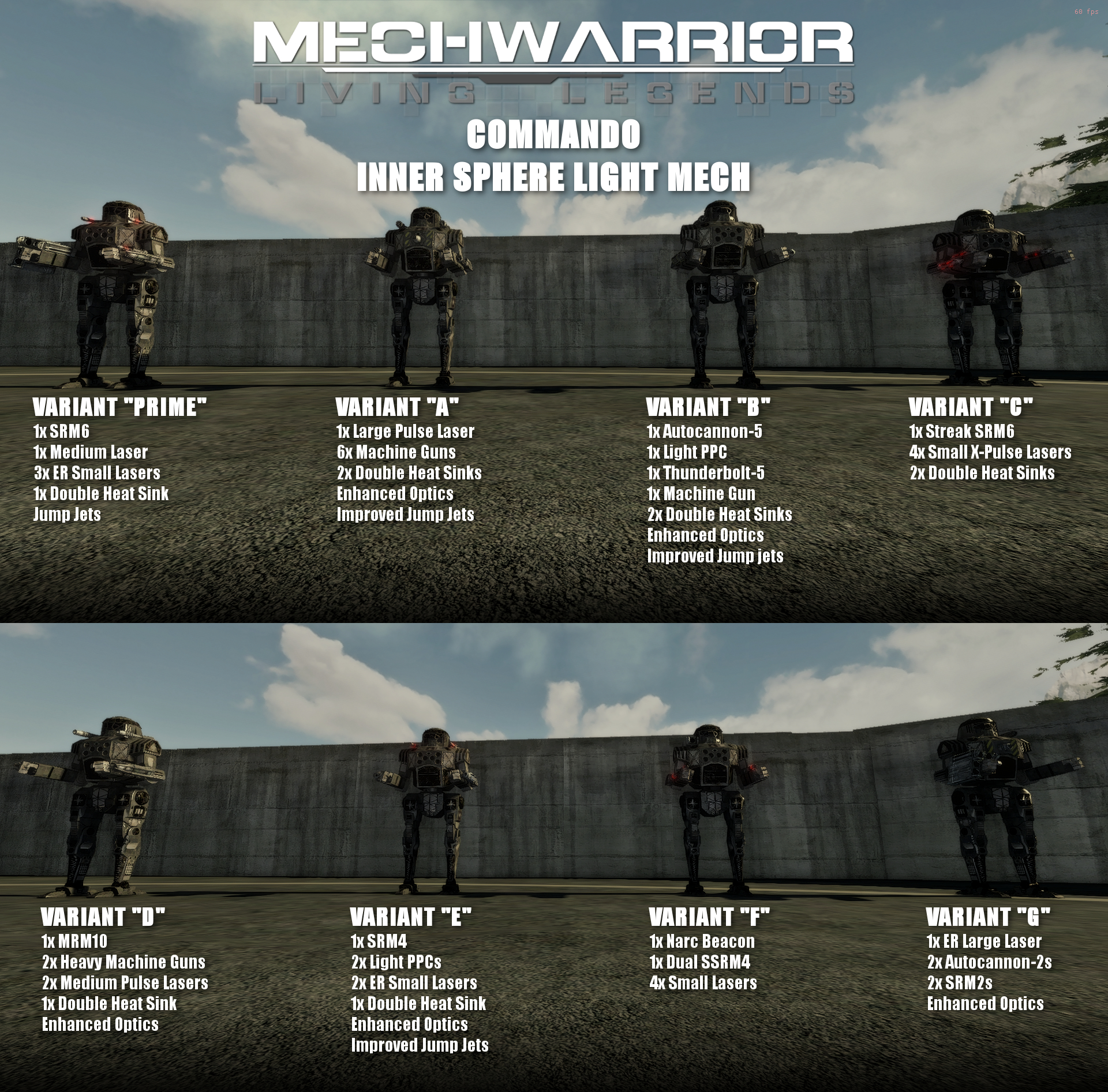 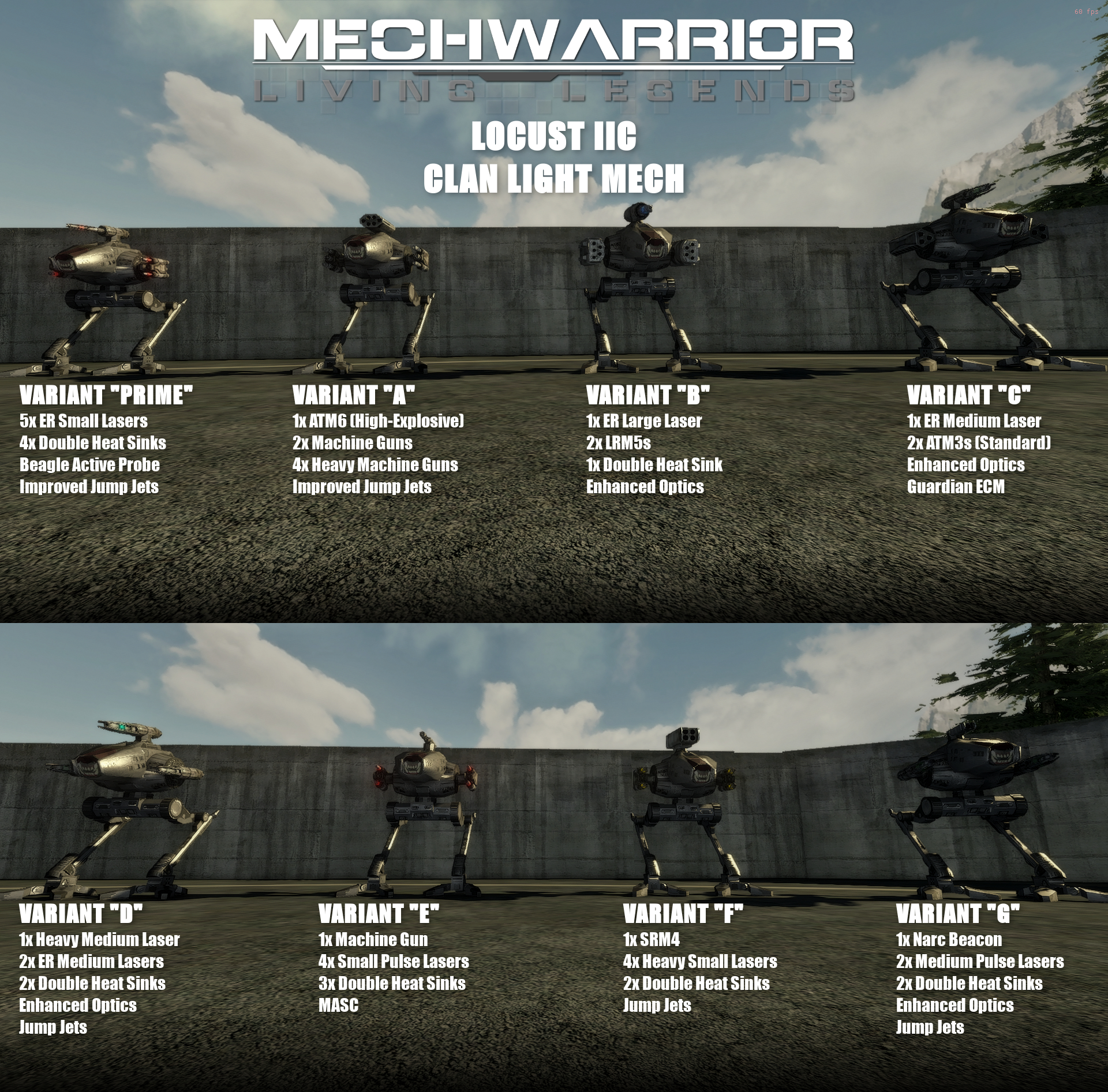 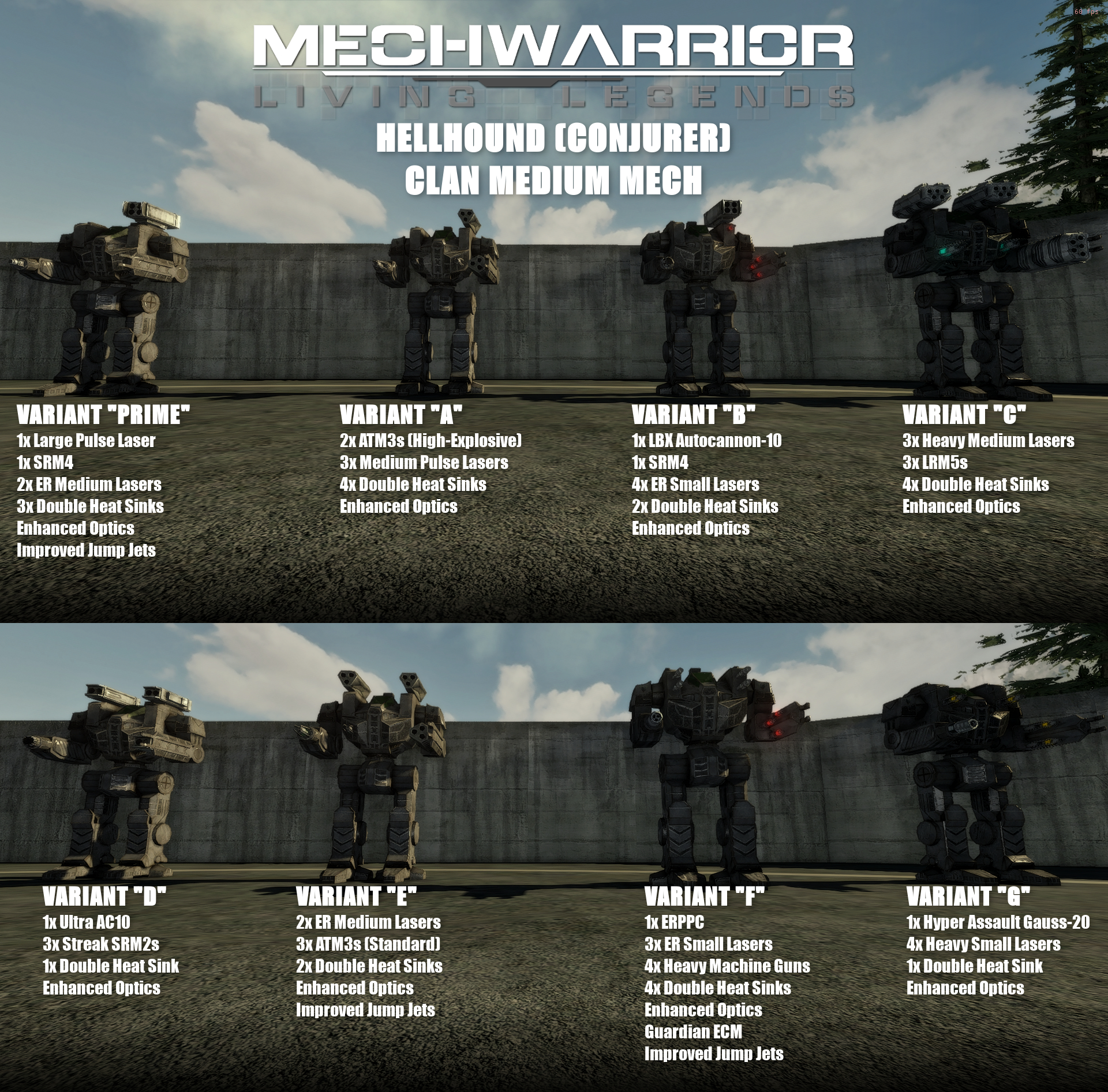 Battle for control of a crashed Star League-era warship on the boiling-hot desolate mountains of TC_Scorched!

Re-live the iconic Battle of Tukayyid on, well, TC_Tukayyid! Complete with dense forests, vast fields, and a day-night cycle!

And prove your mettle on the sands of the new arena - SA_Gladiator! This map also features a day-night cycle.

0.11.0 also brought some economy changes, tweaks to a bunch of assets and their variants, and adjustments to various weapons. Perhaps the most notable such change, the Uziel mech had its torso scaled down width-wise to give it a smaller profile, and LAMS has been changed to toggle on and off depending on whether radar is active or passive. 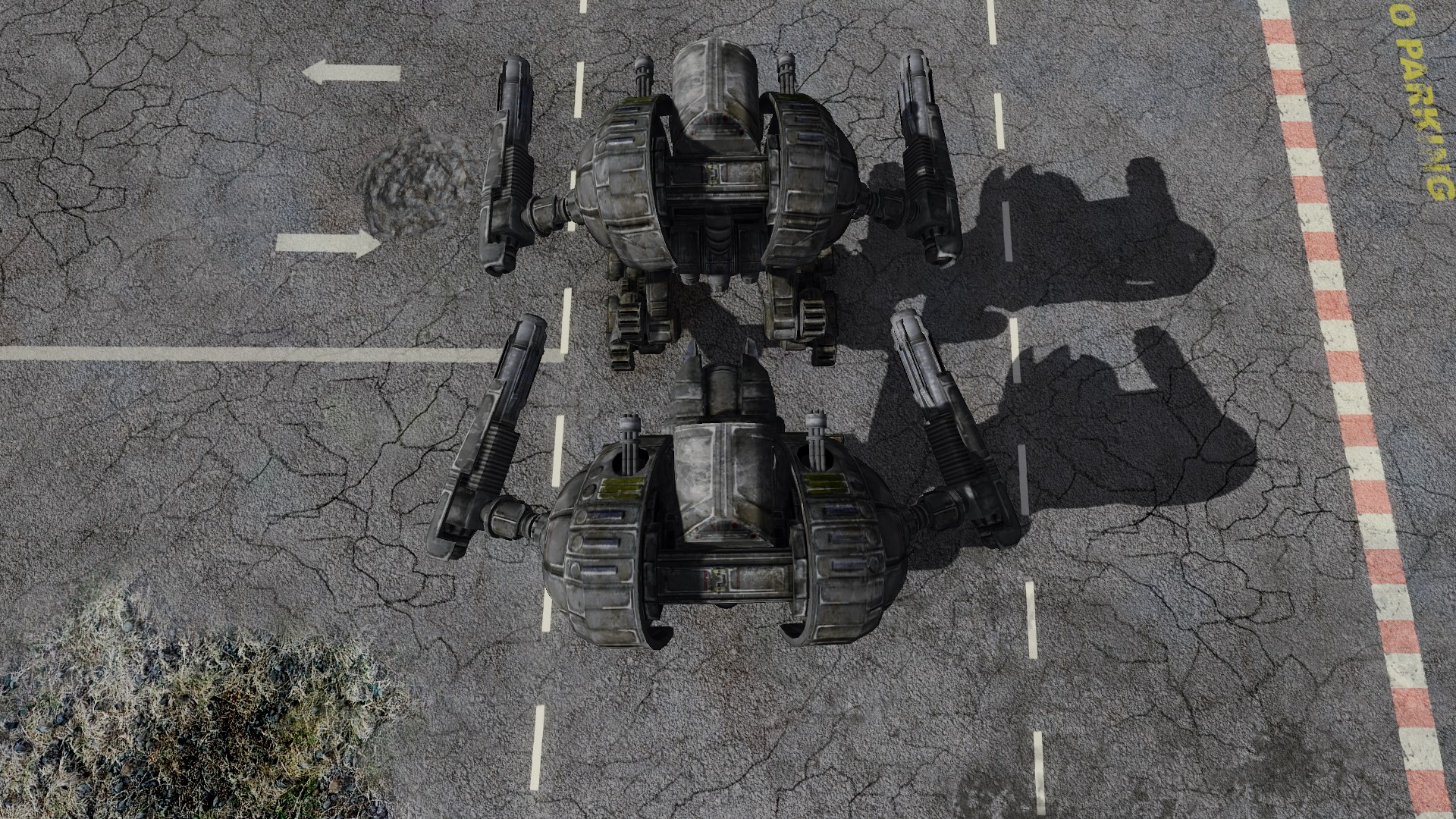 And of course, here's the changelog:

-------- GAMEPLAY --------
- Moved GECM on Shiva A to airGECM rather than ground based.
- Cleaned up some lua script errors regarding buyzones and entering vehicles.
- Fixed some issues with ticket decrement ramp up.
- Adjusted vulture torso material slightly to match up with the legs a bit better.
- Included extra armor for some Hawkmoth variants which had the tonnage set aside for it
- Floating barrels on Partisan D fixed.
- Removed phantom MASCing sounds from Raven.
- Rommel E should now have the increased top speed its larger engine was supposed to provide.
- StripeGreenBlack camo now has actual black stripes instead of ugly brown ones.
- Fixed BA jumpjets jumping in the wrong direction if you used up all the fuel.

- Increased base cbill reward for killing a BA to 4000 from 1000.
- Added sv_ticket_decrement_rampup_rate as a sever cvar for tweaking.

- Ground-based MRMs now function similar to their Air-based cousins.
As a last resort to try and find out why the hit detection is so much worse on MRMs than any other missiles, we've removed the fly by wire tracking to see if this helps the issue.
In return MRMs have decreased spread and double their flight speed. However, to prevent overwhelming performance at pointblank range (where SRMs should be taking over) their minumum arming range has been increased to 65m.
If this does not help either, wire guidance may make a return.

-------- Point Defense System --------
- Doubled HP of PDS to prevent annoying early fire death.
- Increased damage to 2.
- Increased detection from 160m to 180m
- Enabled prediction for better hitrate against fast moving BA (not sure how much it will help)

- New Heavy Machine Gun weapon for both Clan and IS assets.
High damage at very low tonnage and heat, but with extremely limited range. Damage drop off beginning at 200m until dying completely at 400m.

---------- Mobile Long Tom ----------
- Increased maximum turret yaw from 45 degrees to 50.
- Added 0.85 missile modifier (similar to VTOLs) to give the Longtom some extra protection against aircraft and missile fire.
- Sped up animation for deploy and undeploy (unclear if this will actually trigger however)
- Increased inner splash radius to make up ~75% of the total area from ~66%
- Increased outer splash radius on standard and short range ammos for better overall hit consistency with the long range.
- Decreased heat by 100 per ammo class.
- Decreased ticket cost from 9 to 8
- Increased fire rate on the long and standard ammos to match short range.

Moving on, there's not a whole lot to hotfix 0.11.1. It was mostly focused on bringing a couple fixes and adjustments to the economy. With 0.11.0's release, the in-game economy was sped up, but perhaps a little too much (multiple five-minute heavies per team, anyone?), and after some feedback this hotfix was quickly released to tone that down. Needless to say, this hotfix was quite desperately needed.

- Fixed killing players ranked above Point Commander or Major not awarding extra Cbills.
- Normalized the amount of cbills you get on a kill or assist per how many ranks above you the victim was.
This means that cbill progression should be more linear and not a weird bell curve like it used to be relative to the rank of the players on the other team.
- Adjusted aiming ability and damage on new ERPPC turret.

Lastly, this update brought in some more fine-tuning and bugfixes, to make for an even more refined and what we hope has been smoother gameplay. A long requested feature also makes its appearance in this update - the inclusion of assets' ticket costs in their buy menu descriptions.

The changelog is as follows:

- Volume of footstep sounds for Commando, Locust and Hellhound now in line with the other mechs of their respective weight class
- Naming error fixed for AC impacts, which probably prevented proper distance attenuation
- General rebalance and playback priority changes for Missile explosion sounds as they overshadowed nearly everything else.
- Plugged some holes in the Thanatos cockpit area created during resize
- Improved floaty animations on the Commando and Hellhound so that they bob like older mechs.
- Decreased shine on UV camo to prevent glowing at long distances.

- Kill bonus reduced from 4000 to 1000 to try and slow down runaway assist money acclerating economy.
- Increased bonus per rank difference from 100 to 150.

- If you are lucky, your pulse lasers occasionally will fire an additional laser pulse. Despite being useful in some situations, this is not intended. Sorry! :)
- In the Coupled Unlocked mode, when the reticule is very close to the center of the screen, the torso will stop moving, but the reticule will keep trying to recenter.
- The Oro and Rommel cannot turn while reversing.
- Air LBX does not collide with mechlegs
- BA SRMs always update in the HUD correctly whether they are selected or not, but only after they have been selected once after a respawn happened. After they have been selected, weapons can be switched, and they will always update correctly.
- When left empty, each BA SRM tube needs to be manually reloaded (can be initiated by using the fire button)
- BA hardmount MG cannot be fired during SRM reload while the SRM are selected
- BA arm remains in position when hardmount MG is expended - weapon switch clears it
- BA hardmount MG triggers "reloading" state on one of the SRM indicators when they are selected
- BA hardmount MG is not yet textured.
- BA hardmount MG lacks a muzzleflash effect. (it was heavily bugged) Tracers still work properly, however.
- Bpod hit detection remains buggy

- Due to a hack required for new leg sets and animations to create footstep sounds and footstep effects, all mechs will play one footstep sound anytime they come to a complete stop even though they are not moving.

- TC_Palisades: Both ASF factories will only build one ASF at a time.
- TC_Tukayyid trees may still cause some convergence issues when aiming directly at them. We are working on a permanent solution to this, but the most prominent issue with the trees has been resolved
- TC_Scorched on low settings may cause blinding issues in the water

- Certain HUD elements might overlap other UI elements.
- BA SRM ammo counter does not update until the weapon was selected and the reload on them was triggered once
- There is a hang up in frames when you switch targets when using the tank HUD.

- DirectInput Joystick support has been removed due to instability. You can continue using your joystick by following this guide: Wiki.mechlivinglegends.net

Of course, there are always events going on in our community. Every weekend sees several rounds of Chaos March - a semi-formal planetary conquest league - and every few months, members of the community get together to host a 3v3 tournament! There are also occasional friendly inter-Clan/unit skirmishes or "war games", where players focus on sharpening their skills and analyzing tactics. Additionally, training events are held at irregular intervals, so if you're new and want to learn from the pros, keep an eye out! You can stay posted on events like these by following our Twitter and Facebook page, and joining our official Discord server!

More recently, our friends over at Wolves - an amazing fan-made MechAssault revival project (which you can check out at Wolvesgame.com) - have coordinated with us to initiate a "raid" on our game servers! This happens this weekend, and we look forward to an influx of new and returning players! 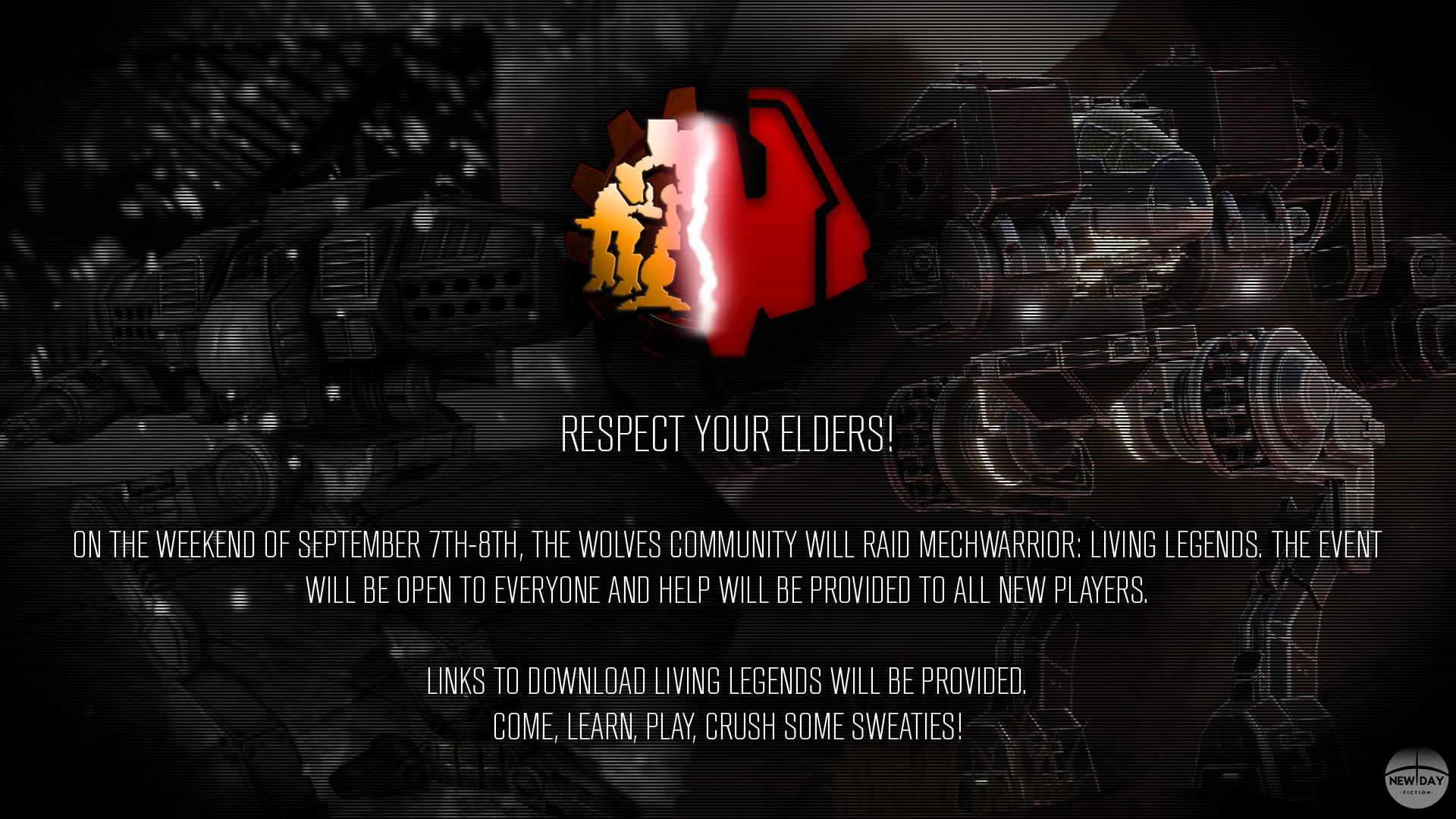 Join us as communities from both MWLL and Wolves clash for two days straight and learn more about each others' games!

We hope you've had a good experience with MWLL and enjoyed reading this article!