LotR: Realms in Exile is a mod for Crusader Kings III, featuring the world of Middle-earth in Paradox's great grand strategy game.
It is the continuation of the Imperator: Rome LotR and CK2 LotR mods.

Realms WotR Bookmark: The great War of the Ring concludes the Third Age.
The Dark Lord Sauron holds the military advantage in this Battle for Middle-earth.
He needs only the Ring to conquer all.

The first release will showcase Rohan and Isengard.

Be sure to join our Realms Discord and checkout the CK3 Modding Coop Discord if you're interested in modding.

LotR: Realms in Exile 2.2 The Shadow on the Sands 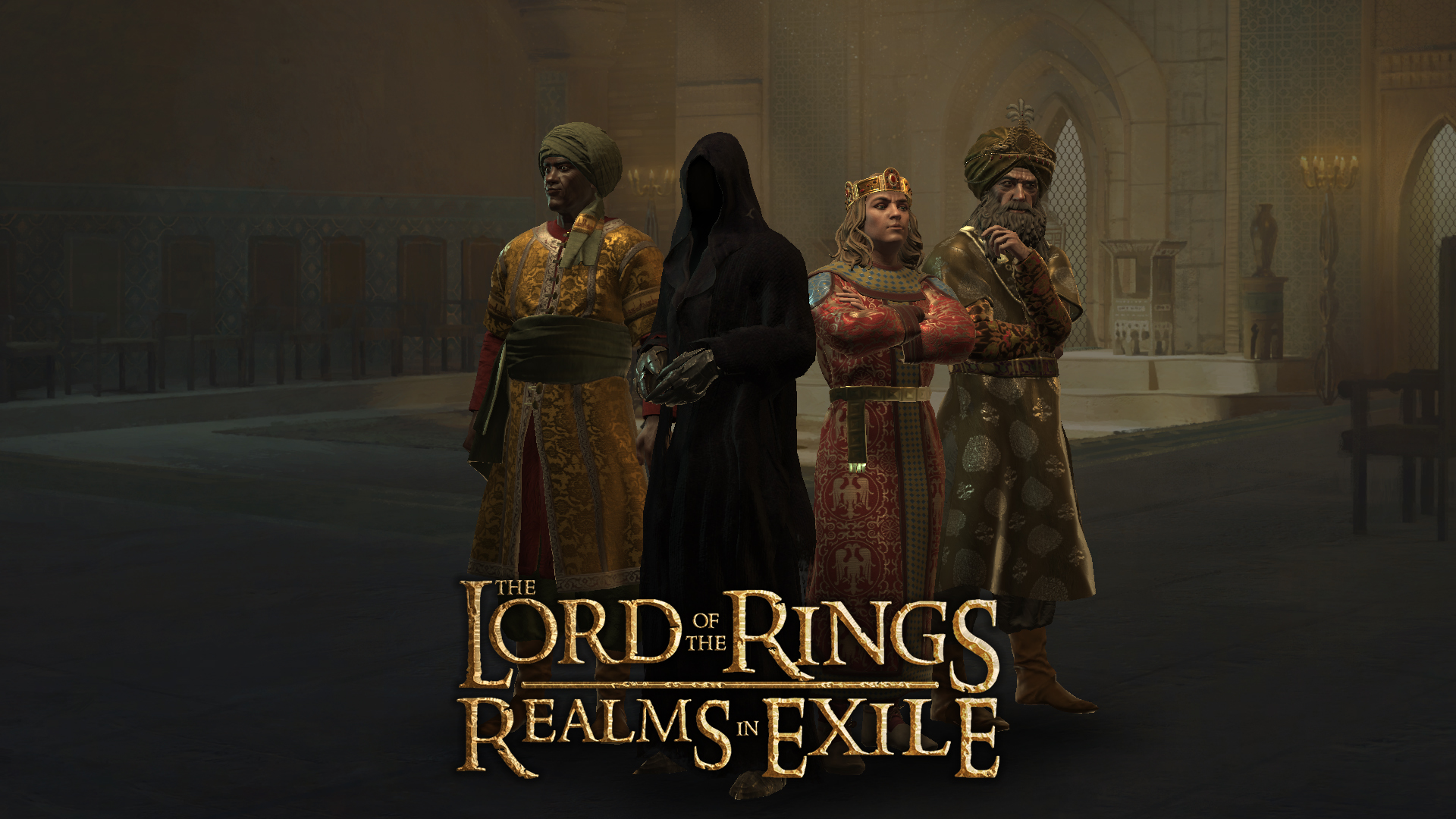 Return of the Crusader King

G’day and welcome to the Realms in Exile mod for Crusader Kings III, Paradox’s great grand strategy game. I am part of an incredible team that has heeded the call for adventure into Middle-earth! Together we are brining the immersive world of Middle-earth to CK3, full of the diverse characters in J. R. R. Tolkien’s The Lord of the Rings.

bb_blockquote wrote: “I wisely started with a map, and made the story fit
(generally with meticulous care for distances).”

Realms 2.2 is a major release, the mapping scope has more than doubled the size of Middle-earth between releases. For that achievement into Far Harad, it is the work of the Realms development team. We were delighted to be awarded Top 5 New Mods of 2020-2021 and be placed in the Top 100 Mods of 2021 and are very grateful to the Realms community. Crusader Kings 3 is very deserving of recognition for its modding communities.
– from Matt Alexi

bb_blockquote wrote: Realms in Exile refers to the kingdoms that formed after the destruction of the isle of Númenor. These are Arnor, Gondor, Umbar, Bellakar and Thôn an-Khârlôkh. Gondor features in the third book of The Lord of the Rings. It is ruled by the stewards of Minas Tirith, as their king was lost in a duel with the Witch King of Minas Morgul. Arnor is the lost realm of the north, Aragorn is chieftain of its few survivors. Umbar was once a city of the Númenóreans at the height of their power in Middle-earth, now it is a mighty haven of corsairs. Bellakar and Thôn an-Khârlôkh are former colonies, far to the south, and the books do not mention their names.

With the announcement of Royal Court and its sweeping changes to the culture systems in Crusader Kings III, and with our gargantuan exploration of the Far Haradwaith, this update has taken its sweet time under the southern sun to be released. Yet, with release there is now a great many lands, vast and bountiful for you to explore.

There is precious little known about Far Harad and its people, the region's name refers to it being the furthest lands of the south, very distant to the wars fought by the Free Peoples against the Dark Lord Sauron in the Third Age, and almost unknown to the writers and editors of The Red Book of Westmarch. What is known comes through stories of war, many of the Haradrim were subjugated by Sauron and forced to join his war against Gondor. In Harad we know there were many ethnicities and cultures, rich coastal cities, remnant kingdoms of the Númenóreans and great Haradrim empires. 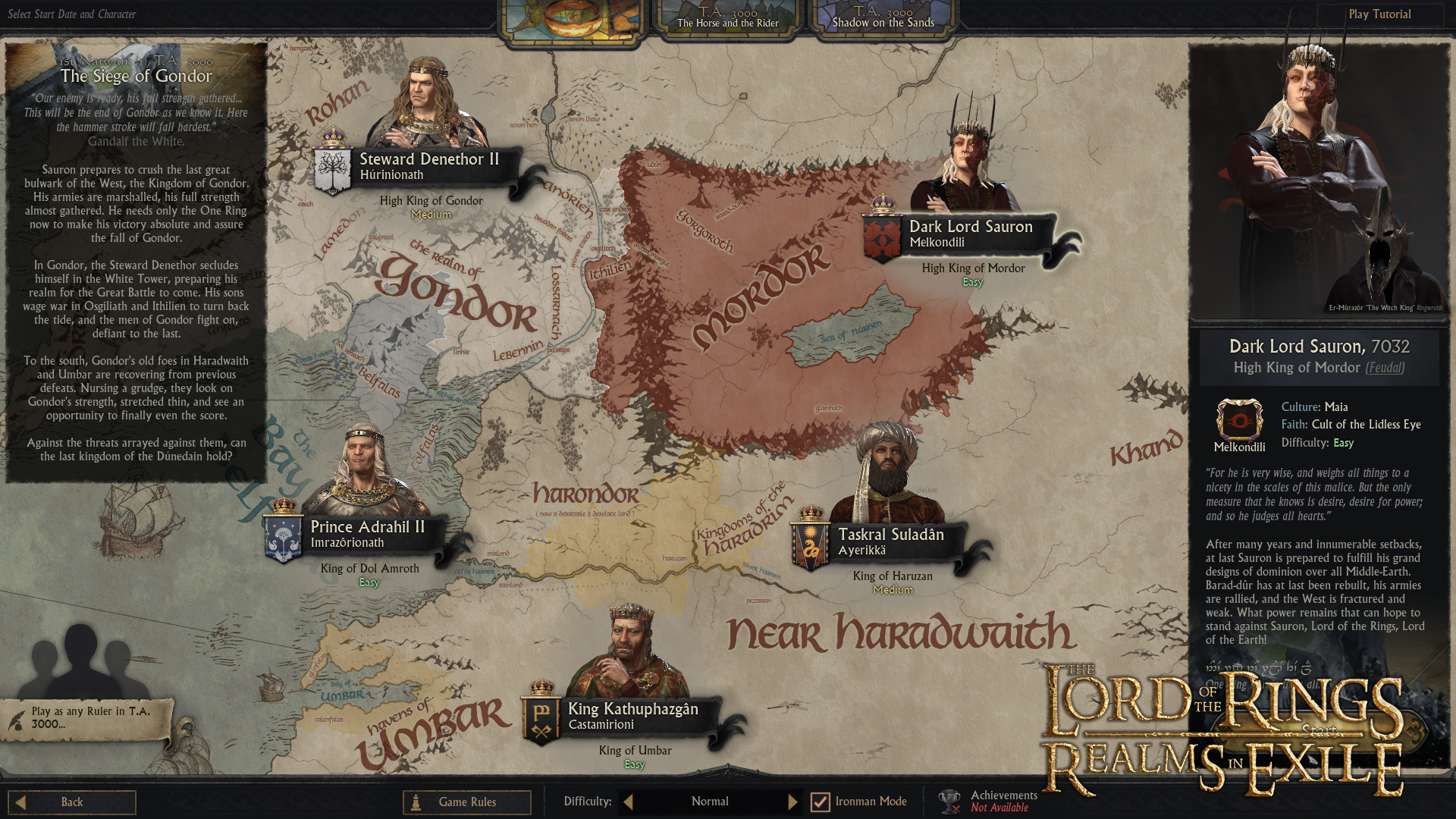 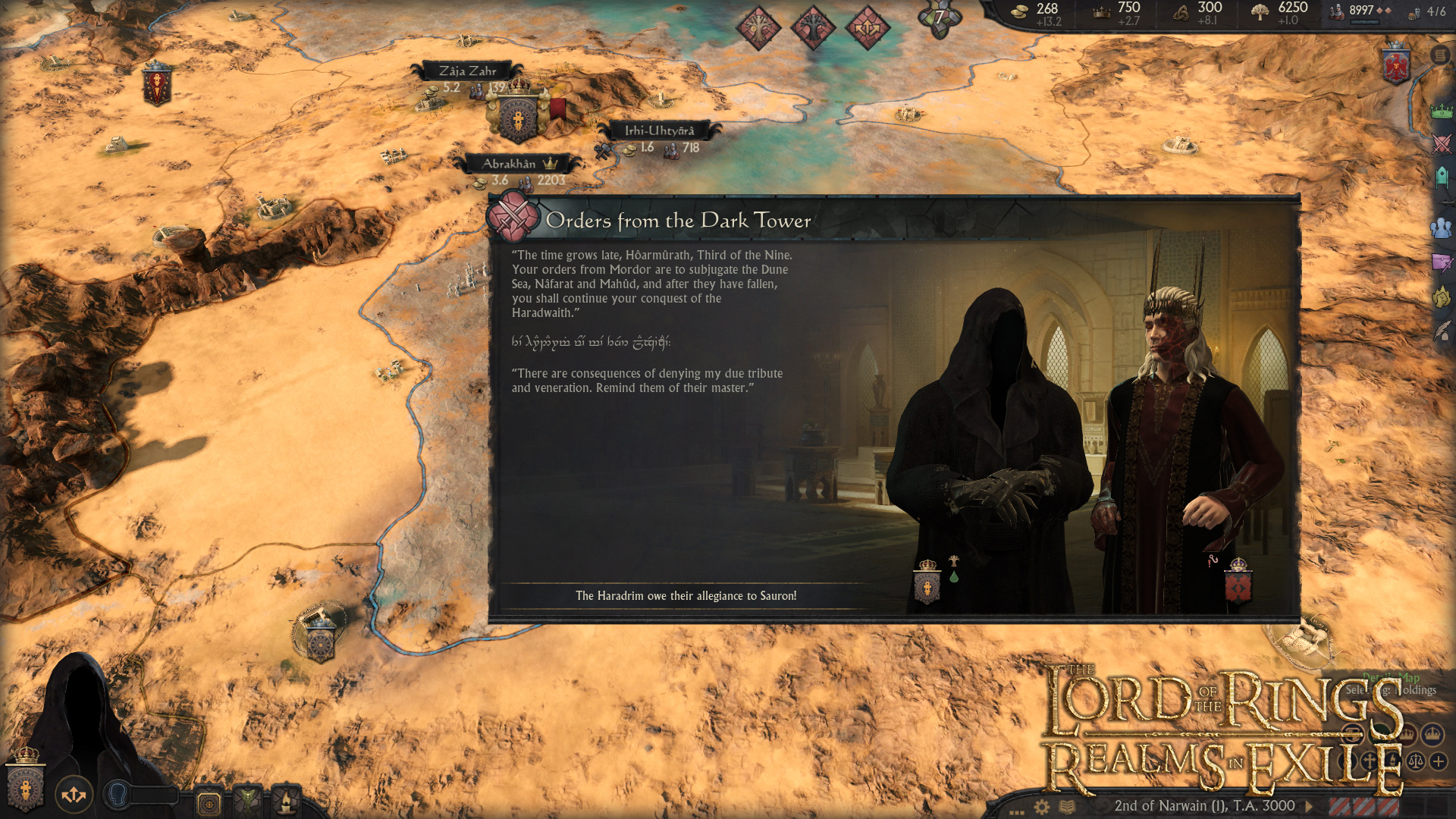 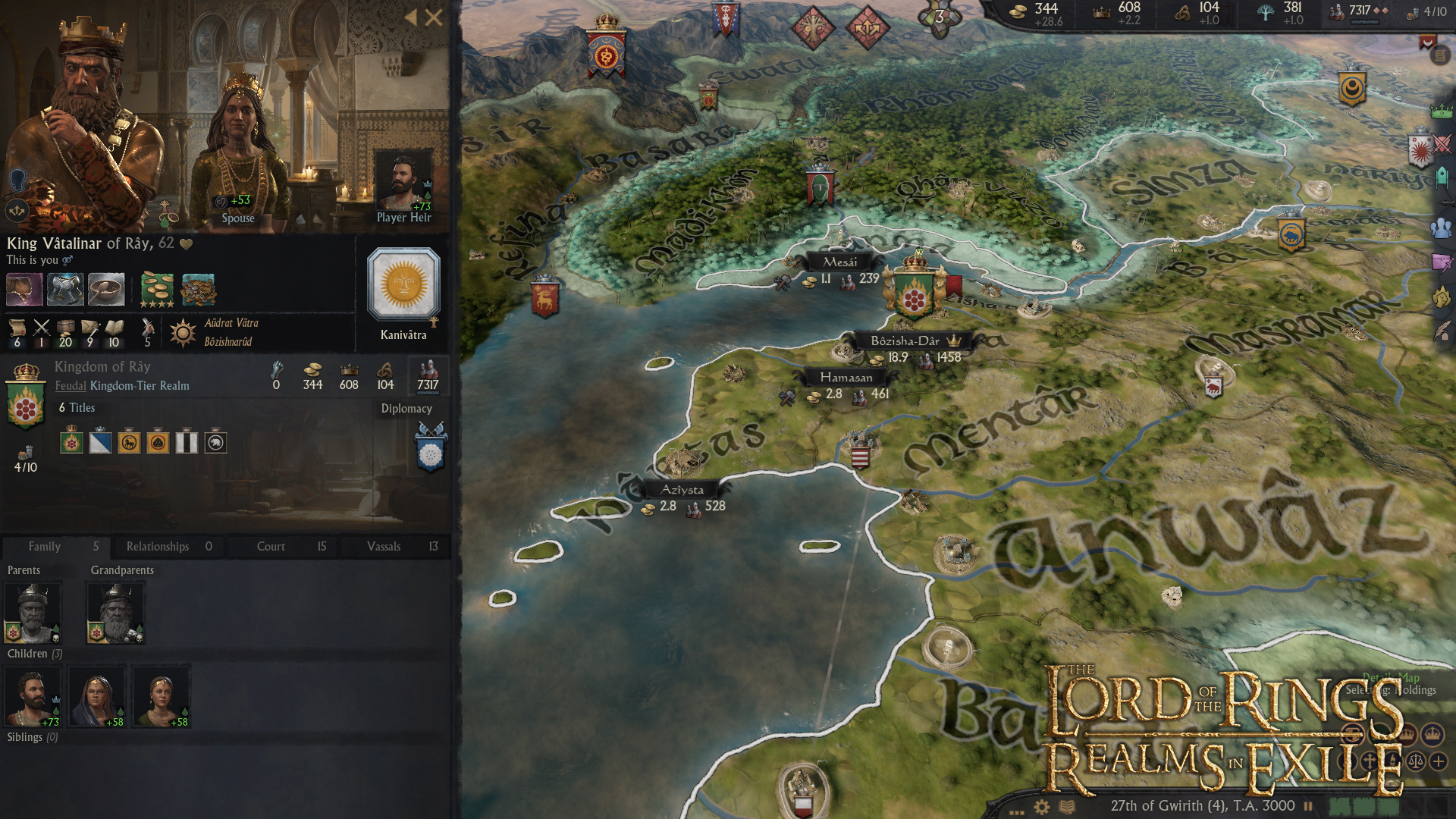 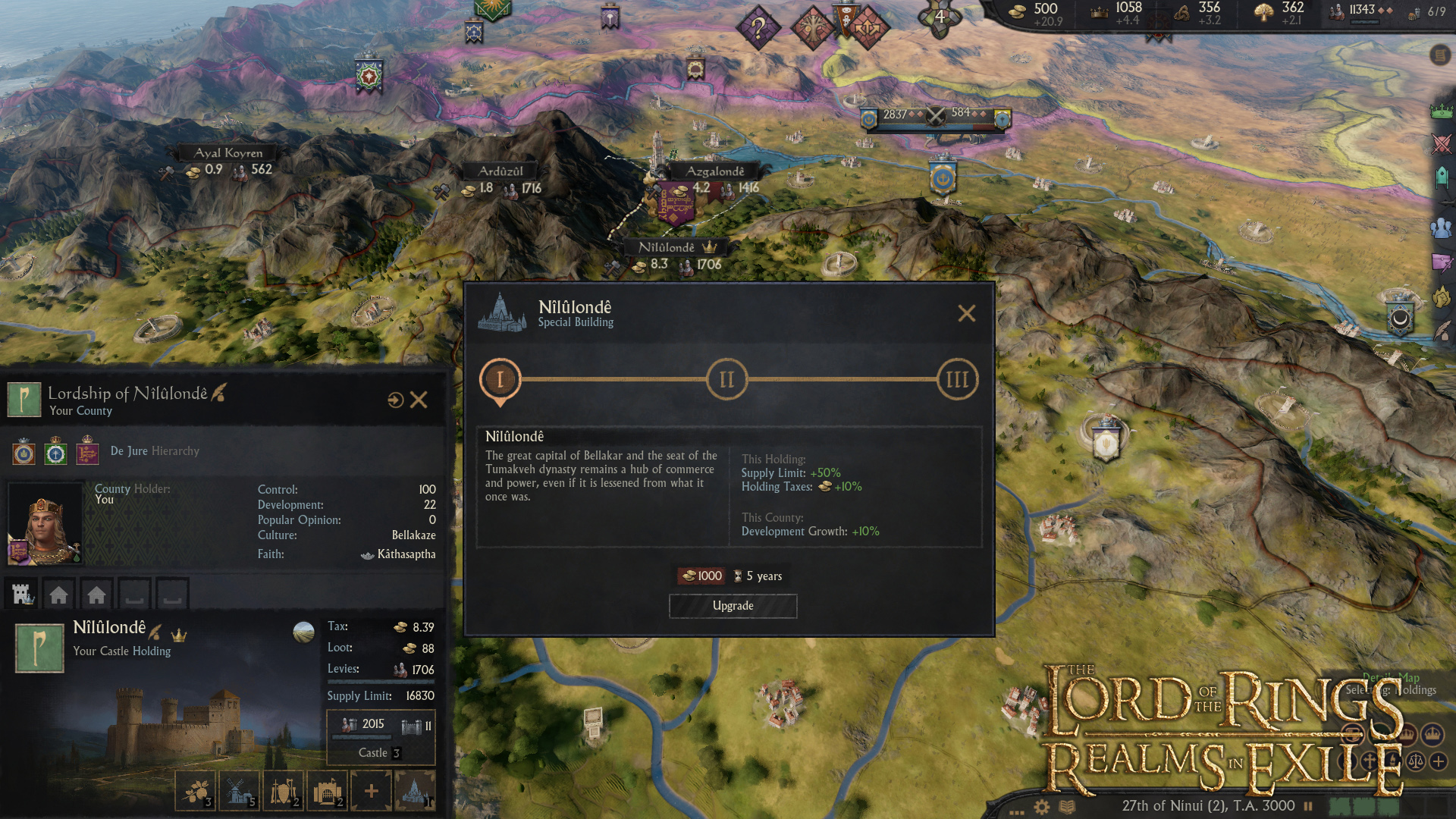 Map Expansion
Reworked the titles of Rohan and Near Harad. Edited the baronies of Osgiliath and Umbar.

Activities
Set sail on the open seas in search of adventure and plunder. Master the waves with the new Mariner lifestyle trait and become famous (or infamous) for your prowess at Sea.

bbCodeBlock wrote: From the North to the South, River Khâr into Anduin,
From the deep Belegaer to the isle of Anadûnê.

Events
Tedjin Civil War: the old Kataj is dying, barely able to avoid factions in his realm from tearing each other apart. With foreign powers intervening in the unrest, a civil war seems inevitable that is sure to determine the balance of power in the region.

Realms 2.3 is Royal Court
Our plan for Realms 2.3 is to develop a patch solely to ensure compatibility with the new Crusader Kings III Royal Court Expansion DLC. You will not need the DLC to play Realms in Exile.

Realms 3.0 Elves of Middle-earth
In Realms 3.0 turn your eyes to the War in the North. Seated at Dol Guldur, the Nazgûl Khâmul of Rhûn wages war against the Elves of Lothlórien and the Woodland Realm, Northrons and Beornings. In the Battle-Under-the-Trees the march of the elves to protect the Free Peoples against the horrors in Mirkwood may be their final destiny.

For a guide on all of the new features included in LotR: Realms in Exile 2.2 please consult our game manual.

The Realms in Exile team is scouting for modders, artists and writers. If you are enthusiastic about LotR and Paradox Interactive's Crusader Kings III, then we would love for you to join our team. Your contribution may be large or small, every single character decision or sprawling event tree will help to fill in the spaces between the words.

If you are interested then we have a role for you. You can contribute by showcasing your works on our Realms in Exile Discord community.

Our Discord is the place to be, you'll be able to join the developers of Realms and receive our latest news.

Thank you for subscribing to Realms in Exile.

In this week's diary, we dive into some of the lore of the distant south, with a brief history of the Rây and the setup there at the War of the Ring...

In this week's diary, we follow in the footsteps of Eärendil the Mariner as we venture into the high seas, looking for adventure and a home long thought...

In this diary, there's stack of Abrakhân events and a helpful tip when navigating the desert.

In this diary, stacks of new holding art has been added to the map, including the Umbarian castles and cities.

Hello, how can I dowload the mod? there are no files? was it deleted? thank you in advance for the answer.

You have to download it off of the Steamworkshop or the Paradox pages. I have no clue why they took them down here, yet kept the page.

Hi, is it possible to have this mod even for the Xbox version? because in the Paradoxplaza I can't find the correct version (and i absolutely want to try this mod that seems amazing!)

Good mod!I always wanted to play LOTR in Crusader Kings 3 before I found this mod.
I want to ask a question about Far East.I think Khand must be a khanate. But I want to know something about Rhun. Will Rhun be a mighty khanate with a Khagan or a Loke-khan? If not, will it be a powerful empire like ancient China?
And I guess you might have played DaC mod of MTW2, because I found your easter egg,Ar-Gimilkhâd of Ar-Adûnaim. Am I right?

Yes, it is an easteregg. There are many more eastereggs to be found! =p

Does the ring exist in the mod yet or?

The One Ring will only be added once Eriador has been mapped (a number of big releases away) and artifacts have been added to CK3.