Kings and Conquerors: The Hellenistic Era

Kings and Conquerors: The Hellenistic Era is a total conversion mod for Rise of Nations: Thrones and Patriots that aims to bring the Hellenistic period to life. 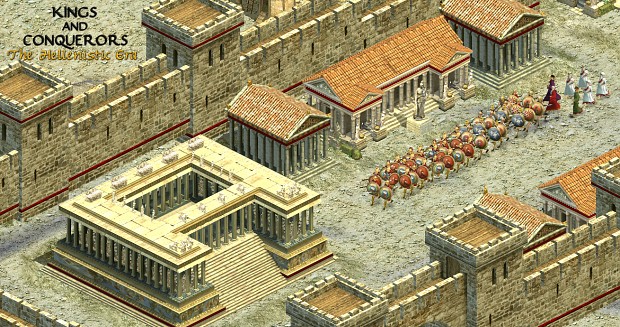 You guys are back again Yes!!! And returned in great style I see!! :D

so the mod is in work again?

Indeed it is! I had to take a break for a while since I've had a few personal matters to deal with, but I'm back on track now and I hope to get the next release out very soon if all goes to plan :)

The Pergamenes are a new nation that will be available in the next release of the Hellenistic Era. Pergamon was originally a minor city state, but under the rule of the Attalid dynasty it developed into a major Hellenistic kingdom. Its armies therefore contain both traditional hoplite elements as well as cutting edge pike phalanxes.

Although it lacks unique units, Pergamon is quite special in that it has a unique wonder that no other nation can build: the Pergamon Altar (Megos Vomos Pergamou).

Credit must go to Beelim for creating the beautiful model of the Pergamon Altar!