Iron Universalis is a total conversion mod for Europa Universalis IV. Countless features have, and are being added to create a very dynamic experience. Everything down to specific nation ideas (Germany gets things such as "Total War", "Hitler Youth", "The Autobahn", ect.), to nation-specific music, to specific events, decisions and diplomacy which the nations faced.

Major decisions Germany can face in the 1930's are things such as:

The game will run in the sense where rather than the player trying to make it feel like World War two by going out of their way to reenact clunky operations, and wars, the game will toss them to you. The main purpose of the mod is to try to offer the player as much as possible to allow them to feel in the mist of the second world war and fighting the second world war. By adding even small events the player can interact with, such as the Spanish Civil war, which, depending on your side, you can support the Nationalists or Republicans it further gives off a very WW2 feel, lessening it's attachments to the known Medieval/Colonial EU4 game. 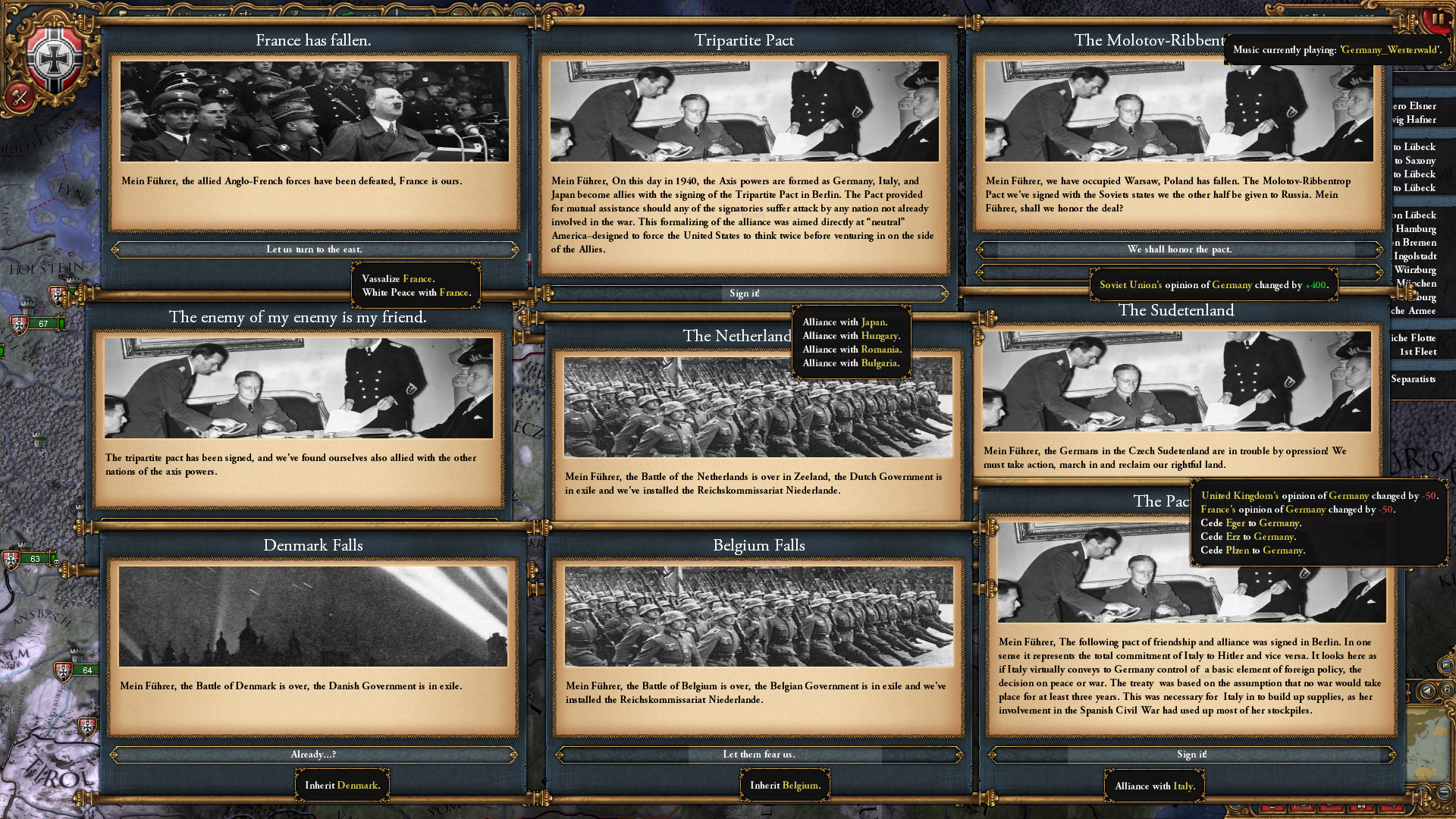 Germany will now get an event if the year is 1938 allowing them to "Annex the Sudetenland", if done the decision "Invade Czechoslovakia" is then available which allows you to take the rest of Czech, and give the historical provinces to Hungary.

I've also added "fall" events for Denmark, Netherlands, Belgium, and France. If major cities are occupied in any of these countries by Germany, Germany will get an event to annex them. In France however, only the northern half is taken by Germany and the south will become a vassal (Vichy France) 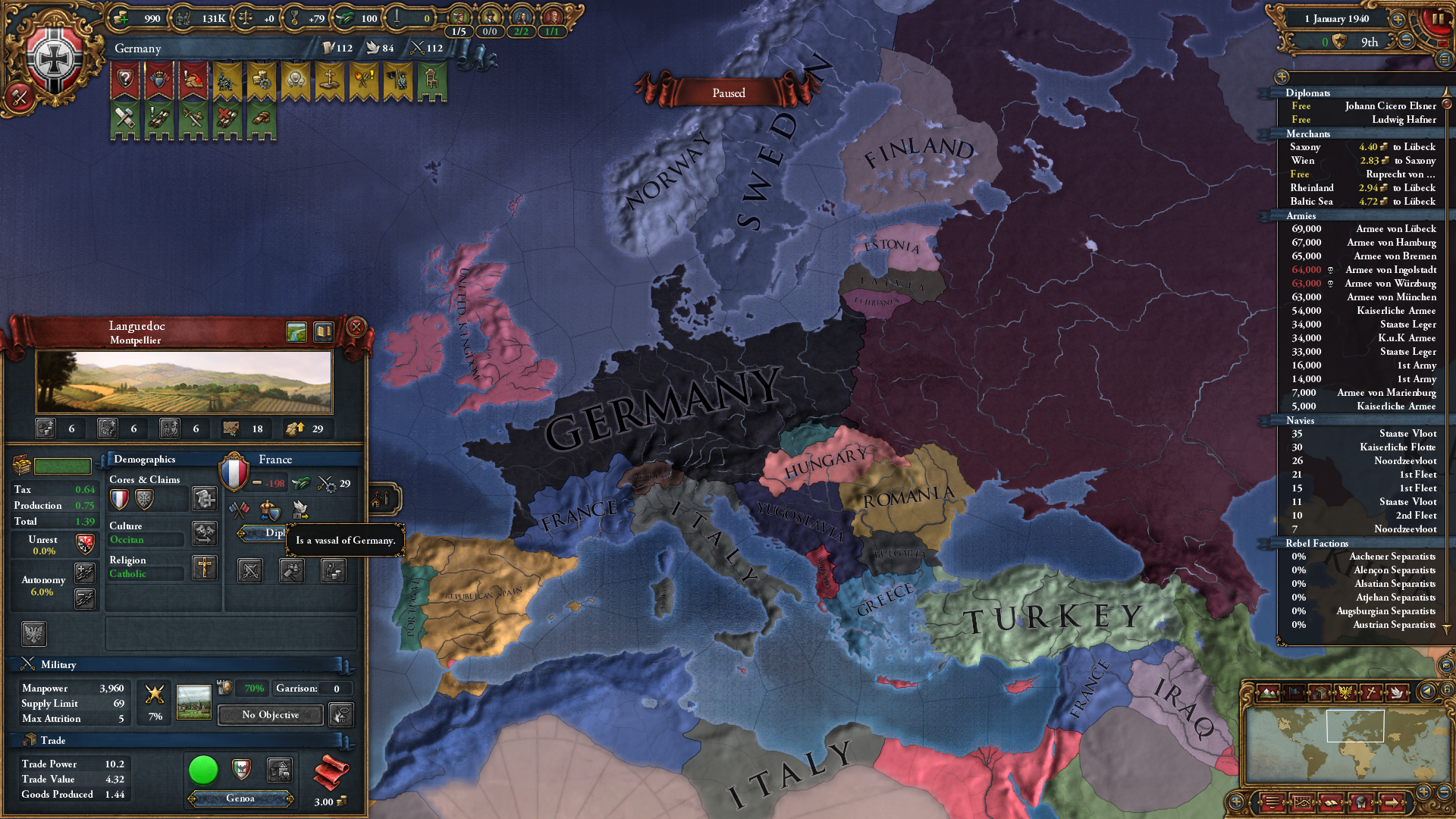 *Franche Comte will be added to Germany rather than vichy france

*Norway is currently being worked on

Major updates from now on will come in pairs of three.

The project has officially been made Alpha, and features are being added every day. A new news post should be posted each week and or every major update...

This seems awesome !
But how do we download it ?

Still a work in progress, I just thought I'd upload a page for Moddb for suggestions and such. I work on it almost daily so progress is coming along really well, and I've got the guy who made the Fallout mod to help as well as the guy who made Lex Talionis II (Most popular mod on workshop for eu4).

The download will be available when finished, but as I said I'm still working on it and I'm not sure when it'll be done. Not too long though. Right now in fact I'm working on dynamic music according to faction ie: German player gets marches like Westerwald/Hohenfriedberger, whereas British player could get music like British Grenadiers, Rule Britannia

i hope its's going to be fun to play as france :)

wait this mod is dead :(

Okay, thanks for your answer, and good luck !

So far the alliances are going along really well, most people who mod eu4 never really add a lot of the flavor involved with alliances/diplomacy. I've made sure that Germany will slowly vassalize their historical vassals, occupy the land they historically occupied, and ally with their historical allies.

What I've done was added the vassalization of Hungary as part of the anschluss, and given Germany an event which allows them to take the Sudetenland. If you do, then you can take the decision "Invade Czechoslovakia" which will give you Czech, vassalize Slovakia, and give historical provinces to Hungary (your other vassal)

I'd like to announce the mod is pretty much play-able as Germany. I've done a playthrough and the events seem to be working, I've invaded the historical countries exactly when Germany did it and it's entirely playable, I haven't worked on Asia or America much yet though. Funny thing is that I USA & Britain allied in 1941, and the USA joined the war. As my last army was dying off of 70,000 around Stalingrad with Russians surrounding me, I looked over (1943, one year off) there was a massive landing with about 50,000 British soldiers and 20,000 Americans. I haven't done any events really for the allies yet, so that's good to see. I'll be thinking about releasing a BETA possibly this week.

I hope this mod is successful, is this mod going to be compatible with v1.8 with art of war Dlc or is it for v1.7 or a newer version I don't have

I've got every dlc for EU4, it's going to be compatible for everything.

The demo will be the end of the month?

Not necessarily sure, I'll begin to work on it again when I'm at school. When school starts I get a bit more productive so no clear date, just depends when I get a sudden urge to work on it again. The mod is coming together though, so you can run through as Germany from 1936-1940

Great mod, but I think it is time to release it, because next month suddenly released the beta of Hearts of Iron IV, then this mod will not have very much grace.
but anyway I congratulate a good job.

Hello from 2016, when will the first download be up?

I was unsure how to upload any versions on the workshop, several EU4 updates ruined the mod, and I ran into several roadblocks. Unfortunately I can't upload this, mostly in part of EU4 Updates/DLC's which had broken it.

Where are the files ?