Heresy Expansion mod strives to give a more satisfying experience to playing heresies in Crusader Kings 2. Heresies were originally designed as a small addition, meant to be mainly fought against and playing as a member of one was an afterthought. However, many players sought to find a better, closer to truth, representation of these real world beliefs. This mod attempts to do this by giving unique features and heads-of-religion to religions classified as heresies in CK2, as well as ability to "reform" them into major players on the European scale. Featured as well will also be new, speculative heresies for reformed pagans. Screenshot given is an early work-in-progress. More up-to-date screenshots will be added later.

By the time you're seeing this news item, the new version of the mod should be already authorized by the site's administration. That new version will finally contain the full support for two of the heresies that come up most often in discussions of Crusader Kings 2: lollards and cathars. With their introduction, the core mechanism by which heresies reform their faiths is at long last introduced.

Fun fact: the word "cathar" is cognate with "catharsis", purification. I imagine a successful Cathar movement in Europe would make quite the use of the "purification" metaphor. So lets follow the steps a powerful monarch in the Medieval Europe needs to take to create a new Cathar Church and ensure its success. 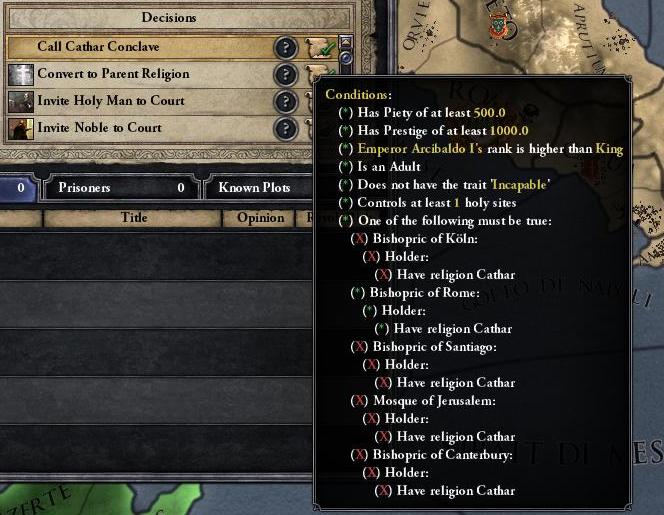 The conditions are similar to the ones you may have seen in the Iconoclast decision. The Iconoclasts take everything in one big step, as is Byzantine tradition, while Cathars (and other Catholic heresies) will have two separate decisions. The first, the one above, merely creates a formal head of religion, blessed with the authority to perform certain actions permitted only to the likes of Pope or Caliph. That title is of ducal tier and could be a vassal even to a king, but we felt that it'd take an Emperor for his decision about Church establishment to be taken seriously. The last requirement is identical to that in Iconoclasm - one of the holy sites has to be replaced with a Cathar. 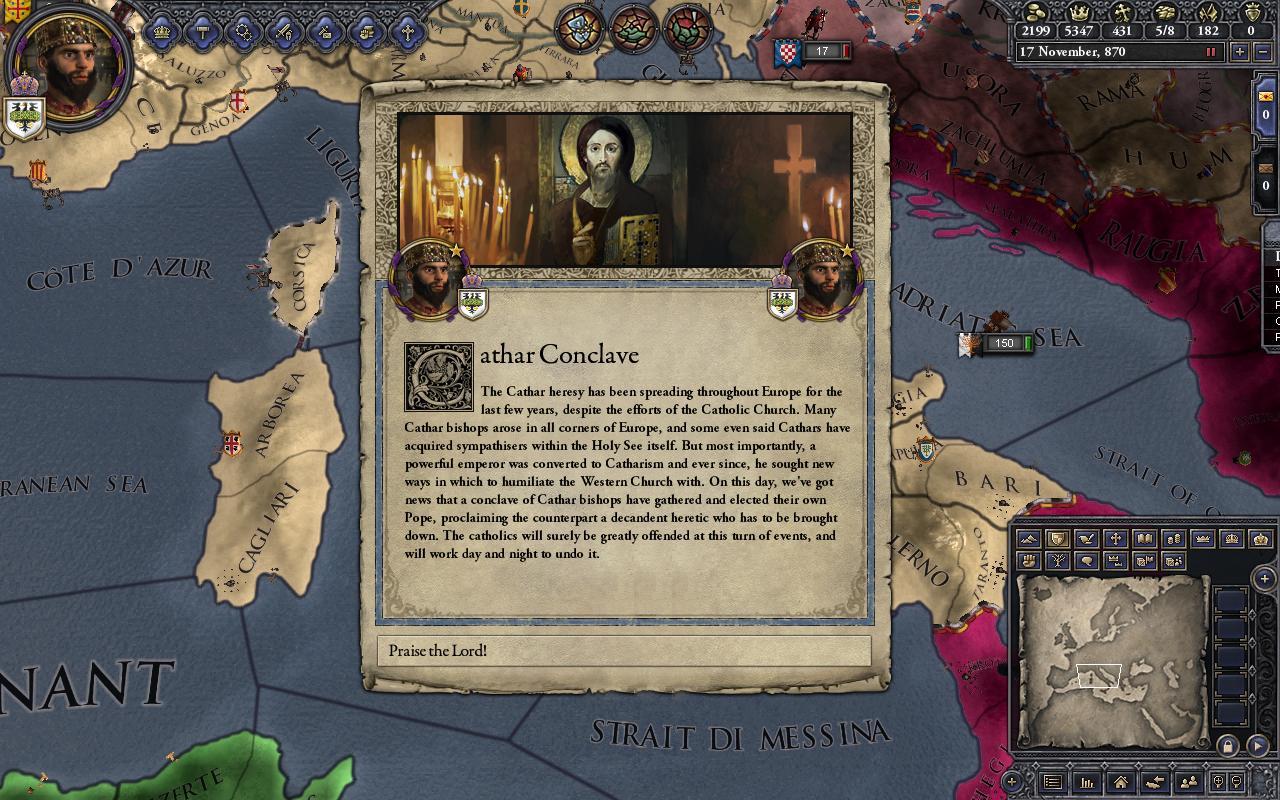 Congratulations! A Cathar Pope has been elected and will now act like any trustworthy Antipope. Yes, I said Antipope. Despite being Cathar by faith, your puppet head of religion will function as an Antipope for Catholics. Don't believe me? 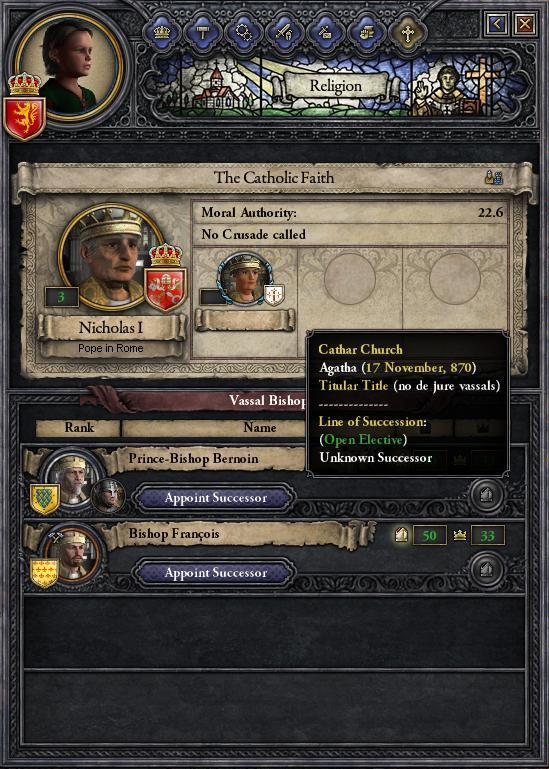 You may also notice that Catholic moral authority is only 22 on this screen. Indeed, Cathar reformation is an especially strong blow for the Catholicism - not only did they lose at least one holy site, the head of heretics' religion lowers the authority by further 20% due to his claim on the Papacy.

But undoubtedly, just placing a Cathar Pope in a Holy See will not be enough for a heretic Emperor. His ambition will make him strive to completely convert the Western Church to Catharism and make sure the Catholic Pope will turn into a minor heresiarch. But how to do it? 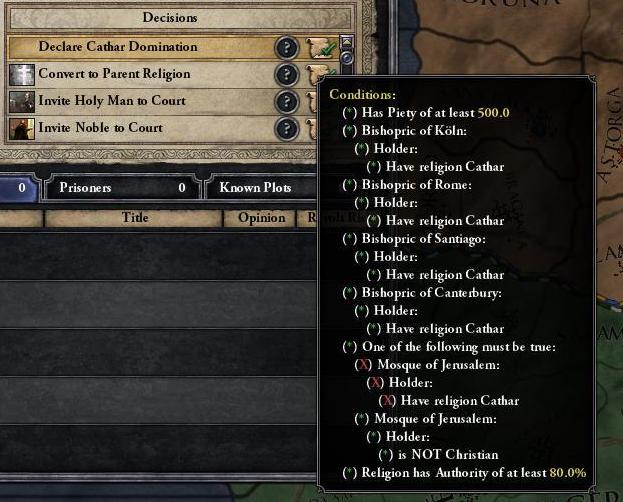 While we feel there may need to be more conditions to fulfill here, for now this is how the decision looks like. In short, you have to replace a bishop of every Holy See of your parent religion with a heretic, with a possible exception of Jerusalem, if it's not under the control of other Christians. You also have to have a moral authority of over 80%, but that shouldn't be hard to achieve with all the holy wars and foreign conversions you will have to go through. 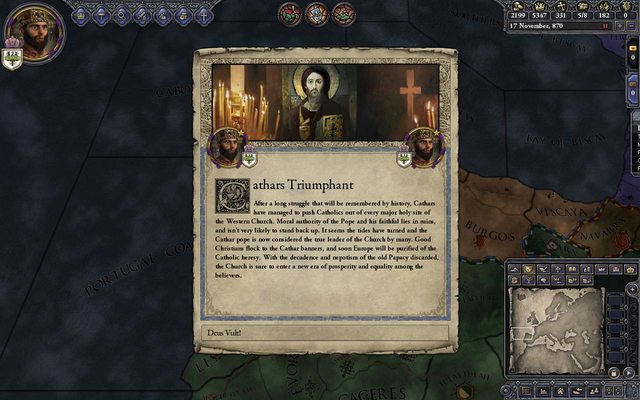 And finally, we arrive at the conclusion of our Cathar journey. Any remaining independent Catholic rulers will be prompted to convert to Catharism now that it's taken a dominant position in Europe, and they would be foolish to refuse at this point. Anyone who does, can be freely targeted by Holy Wars from any of their newly converted neighbors.

If you start your playthrough in the later years of the game, or the right circumstances appear, you may already notice an early version of one new feature planned for the heresies: holy orders. Each catholic heresy will get one holy order they can convert. The last heresy will have the option to create their own, new order (albeit based on a historical, if minor one).

The other feature we're planning on is a new type of adventurer, a heretic adventurer. If there are no independent realms of his religion, and he's a zealous, landless heretic, he will gather like-minded people and go off on a war to claim a new realm that will spread his version of the faith. These should be really rare occurrences, as random, landless heretics rarely appear - but when they do, they open a whole new window of opportunities.

Last but not least, we're making some minor adjustments to the functionality of the Court Chaplain. Even in the current version of the mod you're able to send him to foreign heretical courts and attempt to convert them. For now the events call the target a "pagan" or "heathen", but we will work on those.

This is all for now. We'll see you soon with a new and improved version.

New version of the mod was uploaded, with a working support for reforming Iconoclasm and Manicheism.

Soon, a new version of the mod will be uploaded. As more localisations are coming, we will soon need to translate the names of decisions and events.

Full support for Lollards and Cathars added. New (unformable, for now) titles that control some of the other heresies added.

Is there a mod that will let me have an option to revive a dead religion? I don't see why I can't up and become a Slavic Pagan just because the timeline says the religion is dead.

Obviously, last update was in september 2013.

Are you planning on going further and expanding the Monoplysites next?

This is really nice, can you in next versions start working on the other religions? eg: hellenist?

Is this mod going to be obsolete once Sons of Abraham DLC comes out?