INSTALL NOTES
The first time you try to run a game/mod under Half Life 2 Wiimote Mod it will create a sound cache and it might take a bit to load.

Theres also a posibility the first run of a game/mod will not be able to communicate to the wiimote, If this happens restart the mod and it should connect fine.

Other goals include:
- Bringing the Wiimote Driver to the mod community and offer optional support to many of the multiplayer and single player mods out there today and upcoming on the source engine.
- Give Developers and Designers who cannot afford or aquire a official Wii devkit a platform to concept on.
- And of course giving a solid gaming experiance to the fans of Half Life 2 and Wii.

This mod has its own in-engine Wiimote Driver, Ensuring fast report rates and no need for external programs to be running. It is in strong testing right now and supports most Bluetooth stacks (though your stack must be able to pair with the wiimote, but most adapters are not restricted to their native stack). IVT Blue Soleil stack is recommended, but many have been tested fine.

- I cannot make third party mods or retail multiplayer games support this functionality ( including but not limited to Counter-Strike, Day of Defeat, Garry's Mod 10, The Ship, Half Life 2 : Deathmatch and Half Life Source Deathmatch ) at best some of these games could have a modded version, but it would be limited to only other people running the modded version.
I am intrested in working with the developers if they wish to add these features. Let the creators know if you are intrested in these features.

- I do not know Nintendo's feelings on the PC Wiimote Scene that is developing as they have not said anything publicly to my knowledge about it. I have always been a strong supporter of Nintendo and will continue to be. So if you really like the Wiimote i would suggest you buy a Wii as well because you will find many great titles on the Wii dedicated to the Wiimote.

- Again i am not trying to phase out the Wii. The Wii is a great platform, but as all Console it is not easy to get a Development kit even though it is less expensive than most. The PC Wiimote Dev. is most intresting to me because of this ability for developers to concept solely, not because of the power of the a PC in any measurement.

Wiimote Mod Gets a ModDB

Hey, finaly set one up! I posted some images of the Wiimote model and some of the VGUI inside the mod. The Wiimote model is actualy one half of the tutorial panel. The tutorial panel pops up in game when theres a new special case controll situation. some examples of this are when you want to use a ladder, swim, handle items, and more. There is a large voice over system in place that also puts sentences together on how play as well, It puts sentences together to ensure it is correct to the current setup (as everything is very customizable). 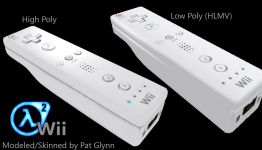 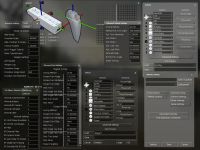 The tutorial panel also doubles as a way of showing how the wii mote is being operated, which is alot easier on me at least because it can be rather stressful trying to capture video on my old camcorder while playing :)

As for public release of the mod, thats what i am focusing on most right now. The initial publc release will not be a final version, but the second will. I am working hard trying to get it out there for everyone and because the driver works good right now i will not be modifying it much more for first release. What this means is its pretty much restricted to the wiimote and nunchuk initialy. the final release will have support for multiple wiimotes, the classic game pad, and wiimote speaker sound (hopefully).

So far I've been very surprised with how many people have the equipment and are willing to test! I am really hoping other mods find this intresting as well. I will be releasing the driver code to the community once the final version is released so mods will be able to incorporate the wiimote into their own projects for both exclusivly and optionaly with all the features the wiimote has to offer. I am hoping this is good news to people :)

is there a way to play this on linux?

Can't wait to try it out, just have to get the sensor bar :D

Looks like somethign VALVe should look into, instead of spending hundreds on the Razor Hydra.

Is there any chance this would work as a Sixaxis plugin, too?

Half-Life² and Half-Life²: Episode One were updated to the Source Engine from the Orange Box. And now these both Games have Achievments.

Can you make please a newer Version of this Mod, which works with the newer HL2 and HL2 EP1 including the Achievments?

Ever heard of a mod call'd Dream Ball ??
It will be nice if you made a patch too Half-Life 2: Wiimote so you can tilt the wiimote so you move the ball!!
Or why not use the wii balance board??
Thy too make it posible please :D

This mod ceased development years ago and the guy disappeared.