It’s been just over two weeks since we released GoldenEye: Source 5.0 and we’ve been overwhelmed with the amazing response the mod has had. It’s hard to overstate how blown away we are.

Our Trailer got over a million views in less than a week and the mod’s install has been downloaded over 400,000 times!

Over the last few weeks there have been some minor bugs discovered, and we don’t want them to go unaddressed until our next major release. We also have a test build of our Linux server!

If you’re a server host then head on over to our downloads page, and apply the patch straight over the 5.0 server install.

Among the various fixes we’re also rolling out a standard vote kick feature to give players a way to rid themselves of unanimously unwanted players.

Typing one of the following commands into the game’s chat (not the console) will initiate a kick vote.

Type “status” in the console which will print out a list of connected players names and ID numbers.

Servers are free to disable and replace this feature with one of their own, but we felt that this was a necessary out-of-the-box feature that all servers should have the option of using.

During our week of media releases we released a limited selection of our soundtrack containing all of the new tracks with 5.0. Now we are releasing our full and comprehensive OST with every track that’s been made over the mod’s development.

This release turned out bigger than we ever could have imagined, and would not have been successful if so many people had not stepped up to help us out. Here are only a few of the awesome community members who helped make this release as great as it was:

Provided us countless servers for the release, starting with a respectable amount but increasing it more and more as demand continued to increase. So many people would have been unable to play the game on release night without his help. He also offered his download site, Krazehost, when he realized we could still use more mirrors.

One of the first to step up to offer a download mirror, he ultimately had nearly 20,000 downloads from his site. That’s close to 40 terabytes of data! He’s also planning on helping us out with a Linux server manager at some point in the future.

Jest has been offering servers for GE:S for years, and stepped up this release to provide quite a few more. Jest has been a reliable and generous server host and has been a large part of this mod’s history.

We would also like to thank everyone else who hosted servers for GE:S 5.0, such as Gamersexile.com who had 6 servers up and running before release. Without all of you we would have been woefully over capacity with all the players we’ve been getting.

Obviously a huge shoutout to ModDB.com, which took a good chunk of our download traffic that amounted to over 400TB of data altogether. It’s no surprise they were “8000mb/s” over capacity at one point.

And of course, everyone who helped seed the torrents. We had many people providing seedboxes and whatever else they could to keep the torrents as fast as they could be, and it really showed.

Here’s a guide to setting up GoldenEye: Source to run on OSX, thanks to lazdzx for writing this.

Keep in mind this runs through Wine and we do not officially support Mac. If you have any technical problems with this we can’t offer assistance.

5.0 Launch Event Is Nearly Over

Don’t forget to play online before the end of the month and receive this skin! 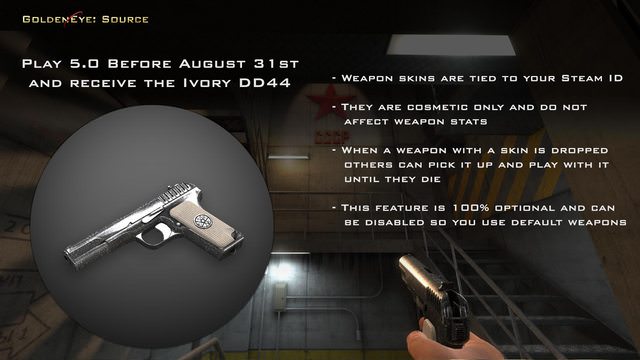