Developed by two brothers known as the 2 Player Team (pythonselkan), Frozen Colony is a Crysis Spinoff which is being designed with CryENGINE 2 and will be introducing a new storyline with new characters and locations.

The Soundtrack for Frozen Colony is being composed by talented music composer Alexander Linhart (NxSG).

Being the work of only two persons (The Vassallo Brothers), the 2 Player Team are doing their best to provide a new action packed fan-made Crysis project dedicated to all Crysis Fans and to introduce others to the franchise!

[The Second Trailer for Frozen Colony]

One of the longest Fan-Made Projects
(Play time compared to Crysis: Warhead) 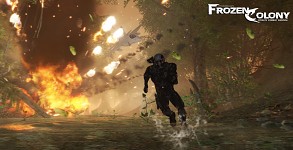 Even though the world suffers of Alien infestation, human threats continue to evolve.

The commander of a private military unit owning the name RESPION,
is reported M.I.A (missing in action) during a solo mission on a remote island in the Mediterrenean.

Xtrypher, who is one of the most trusted members of Respion, is assigned to a rescue mission at the request of his squad leader Hyde, in order to save their commander.
Not being fully briefed of the commander's intensions for being on the island,
he is dispatched along with war veteran; Shield, and is tasked with only one mission;
To infiltrate the island and search for traces which lead to their
commander's disappearance and to provide extraction if possible.

According to several reports, the once-silent island turned into a deadly war zone being fought between Militia and PMC (Private Military Company) soldiers due to some sort of disturbance.

Xtrypher and Shield are both armed with the most advanced combat hardware of the current generation; A powered exoskeleton known as 'The Nanosuit'.

Combining strength, armor, speed and stealth;
The Nanosuit proves to be one of the most powerful warfighters of all time,
taking war into a whole new direction.

How the Nanosuits were obtained is not yet known...


[The First Trailer for Frozen Colony]

[Teaser Trailer - The First Vision for Frozen Colony.
The Project was restarted in April 2010 with a New Vision: to be Bigger, Better and Longer]

Thanks for your interest, and make sure to stay updated!
You won't regret it.. ;)

Hey there! Is it possible for you guys to release what has been done so far?

Can you add a stabilize option while in ADS?

Could you do like some EIM settings in it like the HUD and the other thing that does walljumps n stuff, to make it more realisticly and so no one could just cheat and run around killing, do it as a option?

May I ask why do you say that?

Hey guys! We apologize for not posting any new info or screens lately here on Mod DB! Just to let everyone following our project know that Frozen Colony is STILL in production, and we're doing our best to complete and release the project by next year (2013)! The reason this project is taking time is because we're trying to make the campaign as long as possible and at the same time include a detailed & awesome storyline which fits into the Crysis Universe, and so far looks like we've succeeded. :)
Hope you enjoy the new screenshots we've just uploaded here on Mod DB!

Thanks for all your support!
Python

We sort of cancelled the project in April 2010 and started everything from scratch in Summer 2010 as the mod was originally going to be a simple level with a few cutscenes and one objective.. But then we came with the idea to start everything from the beginning and make the project longer (more levels) with an interesting plot filled with new characters, locations and adding more cutscenes, an original soundtrack, voice overs and more!

So what this has been in production for how long, the trailer says 2009 so did you go deadfor a while or something like that.

Sorry for the late reply but it's been a while since we last came to ModDB... We're still working on Frozen Colony at the moment, take a look at the new trailer released last month!:

65 members
You may also like
View All Top Mods