Freelancer: Combat Evolved™ (FL:CE™)
is a Multiplayer Online Role Playing-Action/Adventure Space Simulation
computer game based on Halo® by Bungie Studios® and produced as a
Total Conversion Modification for the Microsoft® PC Game Freelancer® by Digital Anvil®. 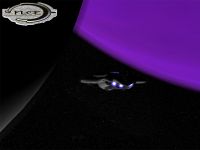 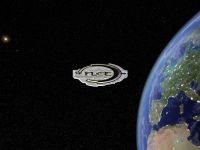 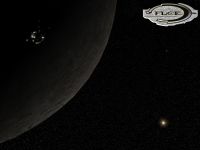 In FL:CE, the Player must chose sides in a galactic struggle being fought between the races of the Holy Covenant and Mankind. In doing so, the Player becomes a part of a large online community of other Players who have also chosen sides, and taken up arms, to advance their Faction's goals. The online community functions via an online forum which the Factions use to organize and control their pilots and fleets. In the game, each Player serves as a pilot and master of an individual vessel of their Faction. Player vessels range from nimble fighters and cargo transports to mighty cruisers and fearsome flagships. Each pilot and the role of their individual vessel is crucial to the overall success of their Faction's military, economic, and political endeavors.

Piloting through the Universe of FL:CE can be as treacherous as it is beautiful. Freelancer: Combat Evolved features realistic Newtonian-style physics and as such vessels have no speed limit and are able to accelerate as long as their vessel is providing thrust. Inertia will keep the vessel moving at that velocity until they thrust in another heading. Commanders must be constantly aware of their navigation, manipulating their speed and heading so as to achieve the required velocity for reaching a certain destination. Traveling between Solar Systems requires the Player make a Slipspace jump. Navigating through Slipspace can be tricky and requires knowledge of Slipspace eddies and their routes to get to a particular destination. Some parts of normal space can also be hazardous due to the presence of objects such as asteroids or artificial structures. When faced with a combat situation these and other factors combine to present the Player with a serious crisis in which piloting skills are tested to the limit.

The military arm of each Faction consists of warriors who are charged with launching attacks and defending against enemy Factions. Day in and day out they must protect their territorial integrity and shipping lanes while attempting to launch raids against their enemies.

Factions rely on shipping raw materials from industrial sites to manufacturing centers to generate Credits. Credits represent a single unit of industrial output and are used to obtain everything from vessels to armaments. As such, a faction's military might relies on the economic backbone of a Faction's industry.

The PC video game Freelancer® created by Digital Anvil® and published by Microsoft® is required to use Freelancer: Combat Evolved™

FL:CE is a community based online multiplayer role playing game. As such you must be a member our online Forum and join a Faction in order to play. A list of official mirrors for the game and update patches can be found in the downlink section of our Official Web Site.

We look forward to seeing you in space! 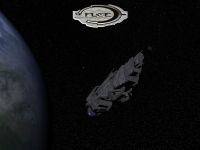 After nearly two months of work, the Freelancer: Combat Evolved Community has succeeded in the effort to decipher a mysterious online puzzle which appeared...

We are such a tease.

After having taken a months vacation, the team has gotten back into gear to give you Freelancer: Combat Evolved Alpha Version 116.23 as soon as possible...

The Official Freelancer: Combat Evolved Announcement Film is here! The over ten months of work, encompassing hundreds of days, claiming thousands of hours...is...

The fruits of the work done by the Freelancer: Combat Evolved(tm) Community to decipher a mysterious online puzzle. Filmed with FL:CE Alpha Version 116.23...

A showcase of various worlds in the Freelancer: Combat Evolved(tm) universe. Filmed with FL:CE Alpha Version 116.23

As an official warning to folks trying this mod, this mod is dead.

It cannot run without the server and it is not coming back, so just move on.

hey dude. im playing your hff mod too. but this freelancer somehow has that better space sim than the homeworld stratergy. any chance you could make a frigate for this ?

This mod has been dead for years.

this mod has been dead for 4 years it would be nice if they released the ships and what not for at least a singleplayer addons that people could use.

i finally found a download for this mod but it will not work. i was wondering if you could post the newest full version and any patches for it. this would be a great help. thank you

The game crashes right after the splash screen disappears. why?

i want to play this mod, can some one please put a dl, i dont care if there are bugs in it, i love halo and have always wanted to fly these ships

Where to get that is it possible? Found nowhere.