Fortress Europe is a historical realism modification for Company of Heroes 2 that is currently in development.

Battlegroups, Combat teams, Kampfgruppen; all these terms describe a collection of units assembled for a specific mission or purpose.

In Fortress Europe, you will pick a Battlegroup at the beginning of every game. Each Battlegroup comes with a tailored selection of unit choices and abilities, similar to a Commander, but is modeled on an actual historical unit type and the support elements it would be able to call upon in battle.

All units are organized according to their historically accurate formations. Countless hours of research have gone into examining US Tables of Organization and Equipment, British War Establishment documents, German Kriegsstärkenachweisungen papers, and what little information is available on Soviet organizations. These wartime documents detailed the size, ranks, and equipment allocated to all military units, allowing us to make formations in Fortress Europe be as historically accurate as possible.

This means every squad, team, and section have the correct amount of men and exact weapons they would have been issued. Platoons you deploy will be constrained to the equipment they had and the amount of squads or vehicles they actually possessed.

Ever found it weird that the armour profile of a tank in Company of Heroes was just a single value for front and another for the rear? The loading tips may talk about side armour, but there is no such thing in the game.

So we changed it. Fortress Europe has the entire armour profile for every vehicle, containing each plate along with their thicknesses and slope angles. When ever a shot strikes a vehicle we determine which plate was hit for that side and at which angle. Using a formula derived from the book WWII Ballistics - Armor and Gunnery, we get the result of the impact.

Also, there are no hit points. Damage is done to the internal components and the crew inside. Kill enough crew members - or knock out enough systems - and the remaining crew will bail out and retreat. Igniting the ammo will take out the entire vehicle. Hits also have a chance to cause fires, which will either force the crew to bail out or waste their time extinguishing it.

Company of Heroes has always rewarded smart micromanagement, but babysitting your units can be frustrating. To ease the burden, infantry will automatically use anti-tank grenades and launchers on enemy tanks that get too close. Vehicles and towed guns will automatically switch to the correct ammunition for the target they're firing at. Infantry in the open will fall back out of range if suppressed, rather than lying prone and waiting to die.

Join our Steam Group to stay up-to-date with announcements, discussions, events, and more!

Also, check out our Subreddit!

So what is Fortress Europe doing with the new moddable UI that was added in the latest update? A lot. It's a really big deal as it enables us to do what we've always wanted. Players familiar with tabletop wargames that allows for list building - like Warhammer 40K, Warmachine, or Flames of War - will already have a good idea of what we're aiming for with this.

Battlegroups
Combat Team, Forward Detachment, Kampfgruppe - there's lots of terms for mixed fighting forces, but they were all combined arms groups assembled from various units to tackle a mission or task. In Fortress Europe we use the generic term Battlegroup, and you will be able to assemble and command one.

With the new UI features that Relic add, we're putting a Battlegroup Builder menu right into the game that you can use at the start of any match. You will be able to design and customize your own Battlegroups in the game, as well as save them locally to your machine so you can use them in future games. This will all be done with a menu-driven UI that appears when the map is finished loading, giving you the option of making a new Battlegroup, loading one you've already created, or editing an existing one. All the Battlegroups you save will be local to your machine, but will be text files that you can copy to other machines you have the game on, or even share with others. Attempts to cheat by editing the Battlegroup files will be noticed when the file is loaded, as it will doublecheck to see if the units included in it are legal and do not exceed your max point total.

If you're playing a multiplayer game then a countdown timer will begin as soon as one player has finalized their choice of what Battlegroup they want to bring to the battle. The more players that finalize, the shorter the countdown timer gets. A single player can't indefinitely stall the match at the beginning. If you want more time to explore all the Battlegroup building options - and we strongly recommend experimentation - then you'll want to play a Skirmish match against the AI to avoid the countdown timer. We will release with a few pre-built Battlegroups that you can try out and edit, if you just want to get into the game quicker.

Once the game begins after everyone has picked their Battlegroup, you'll notice some other differences. One major change is that you do not have a base to build or defend, so you don't call in units the traditional way. Instead you have a Reserves menu on the right side that shows everything in your Battlegroup. The Reserves menu can be hidden or expanded with a button that sits where the building tabs used to be. Simply navigate through all your purchased units through the reserve tabs at the top, pick the unit you want to deploy, and it will show you what is available in that unit to deploy to the battlefield. The sections, squads, and teams in that unit will be shown, along with silhouettes of exactly what they are and how many remain. Simply click on what you want to deploy - and if you have enough manpower to afford it - the unit will be dispatched from your off-map reserves and arrive shortly.

Fortress Europe does not support Annihilation and is not intended for Victory Points, instead we plan on having our own Mission Objectives that will feel like multiplayer variations of single player objectives. We haven't completed these yet and so can't reveal them, but we will be using the new moddable UI to call them out and inform the players as to their progress.


So now for some more detail on what a Battlegroup is.

Military Organization
We're trying to make Fortress Europe as authentic as possible, which means we're actually following the tables of organization and equipment that every nation put into practice. So when you're creating your Battlegroup you'll be incorporating platoons, companies, and batteries into it, not individual vehicles or squads. Those larger units will contain multiple squads and vehicles that can be deployed to the battlefield, but you'll have to buy them as part of a larger unit. For example if you want some troops to escort your Soviet Tank Battalion, you can get the Motorized Rifle Platoon, which can grant you up to 3 squads plus some trucks to transport them.

Core Unit
First step is to pick a core unit that the Battlegroup is built around. When we first release we'll just have the most common types of core unit, but eventually we'll have dozens in total. Typically the core unit is company-sized, like a US Rifle Company or German Assault Gun Battery. The core unit starts off at its weakest strength - often with just the bare minimum of platoons - but you can spend Manpower to bolster it back up if you'd like. Or you can save that Manpower for the Support units.

Support Units
Your choice of core unit determines what overall unit (i.e. division) it's from, and this narrows down the kind of support units that are available to you and in what quantities. For example, a US Armored Rifle Company comes from an Armored Division, and Armored Divisions have their own Tank Battalions so tank support is plentiful. However a US Rifle Company comes from an Infantry Division, which only has a single Tank Battalion attached to it, and your Battlegroup isn't the only unit in the division that wants those tanks, so you're limited to just a single platoon of them. On the other hand an Infantry Division has a lot of artillery available to it, so what you lose in armour you make up for in indirect firepower.

Perks
Eventually we will be incorporating a perk system into the mod that replaces Intel Bulletins. These will be tied to your Battlegroup and provide bonuses, unlock rare units, and give you new abilities. Since we can't use the War Spoil system, Perks will all be unlocked from the beginning, so you don't have to grind through our mod to try them all out.


Here's what one of the Battlegroup menus will probably look like. We don't have it completely working in-game yet otherwise we would show it off in action. 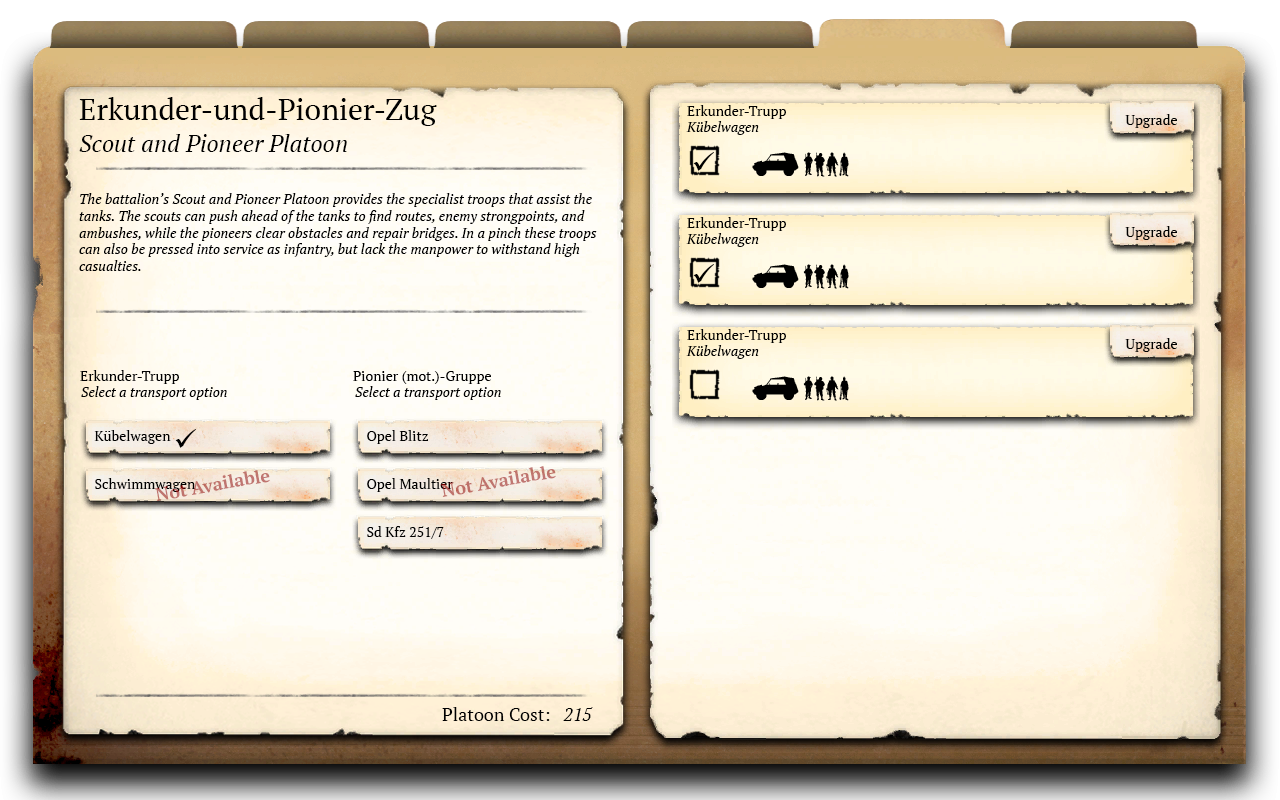 In this example, we're looking at a specific platoon and choosing what options it has and how many squads. Only the scout portion of the platoon is up at the moment, but the real platoon would also have up to 3 Pioneer squads that have their own transports. The upgrade button will allow you to add additional weapons or equipment to a specific squad, like adding Panzerfausts to the scouts.

The cost listed at the bottom is just a placeholder, but everything will cost Manpower and only Manpower. There's no Fuel or Munitions to worry about in the Battlegroup Builder.

Finally, here is a preview of our Deploy Reserves UI:

You guys should REALLY consider releasing it in the current state; lots of people have been waiting, and you have put in LOTS of work that should not go to waste... Even a half-assed version would be a god send.

and this mod is DEAD

This mod looks awesome! I love the idea of realistic battlefield deployment.

will it be ever possible to make mods with new units or not?

It is already possible to make mods with new units. However, if you mean with new art assets, such as models, who knows?

Age of Stainless Steel Age of Empires II: The Conquerors