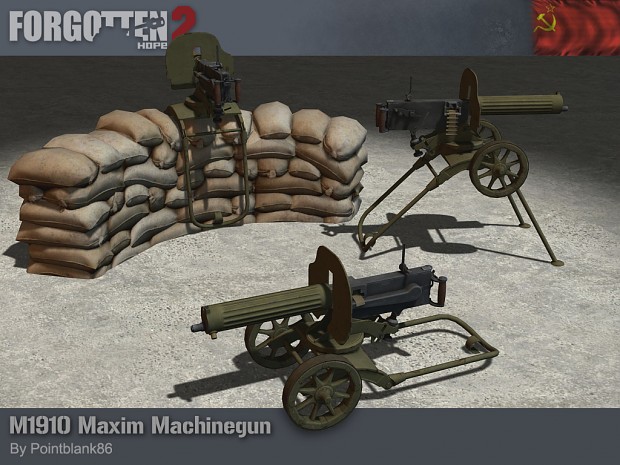 So we will be to tow these around with us as infantry or will they all be static?

I think static but movable.

Static but movable...hmm...a slight paradox there, me thinks ;)

Yeah a good paradox there, it makes me smile!

Ive never seen that anywhere, It´s like a old camera.

Yeah, because sometimes you just don't have a time for MG barrel to get cooled nor time to change it :)
Anyway, that was true that Maxims were used in WW2...

And the Korean War too.

lol, i thought this was a mini-arty or something :D

It's just a .30 cal machine gun, but water-cooled, that's why that sleeve it that big.

time to kill some fascists

The first Maxim gun had been demonstrated in 1884 by inventor Hiram Maxim, and would go on to serve in many European armies in various colonial conquests. The Imperial Russian army adopted a modified version in 1910, chambered in the standard 7.62x54mmR rifle cartridge. This design would go on to serve with the Red Army well into the 1960s. In that time, a few improvements were made, such as adding the ability to feed from metal belts as well as the older cloth belts, as well as the distinctive larger water filling port copied from Finnish Maxims that allowed the shroud to be filled with snow.

The M1910 was mounted on either the Vladimorov mount designed in 1939 or like our example: a 1910 designed Sokolov mount. The wheels allowed the gun to be easily manoeuvred despite its heavy weight, and the mount also had legs that could be extended to make it taller (although these were later deleted to save construction time). Each gun was also issued with a gun shield, though in the field these were often abandoned to save weight. The M1910 Maxim was made by Pointblank