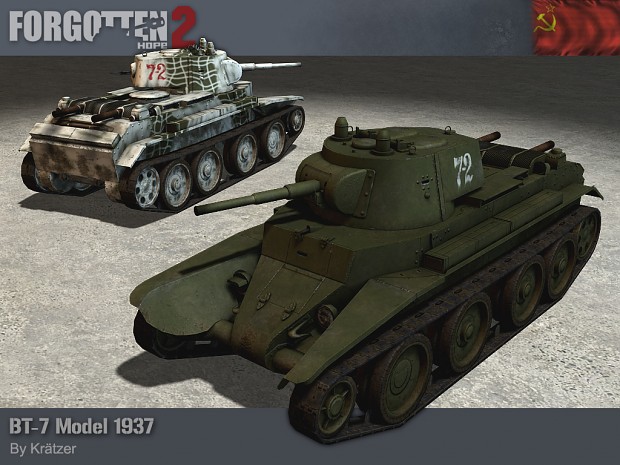 very nice, takes me back to those old eastern front games :)

Very nice work, guys (as allways)! I didn't know that the BT was originally thought to be in the US Army but was rejected.

This tank was also used in the Winter War between Finland and the Soviet Union.
My question is: would you add Finland in some Eastern Front maps (perhaps not Winter War, but Continuation War). That would give us another Axis power (since Japan won't be in the mod), and also one of my favourite countries in WW2, which is (sadly) not featured in many games.

I think I heard/read some rumours a year ago or so about Finland being in the mod. I'm not sure if the devs. are still planning on adding it though.

Anyway, I'd like to see Finland in this mod too, not because I'm a Finn myself but because I love playing as smaller nations with funny and largely unseen weapons in most of the videogames I've played (see Italy)

Most of the smaller nations of the war are also largely ignored and I'd like to see more of them in games. Even a nation like France is hard to find in any ww2 fps-game.

Great model! I also want to say that you should give the Red Army the GAZ 64 and GAZ67 jeeps and not only the Lend-Lease American willys Jeep.
The Zis 5 truck would also be great. Can't wait for the Eastern front!

The BT series of tanks were direct descendants of American Walter Christie's experimental tanks of the late 1920s. Following the rejection of his Model 1928 by the US Army, he offered the design up for foreign buyers. Soviet agents were able to purchase and export 2 prototype hulls as well as blueprints, despite the sale being without the approval of the US government.

The BT-7 was the last mass produced variant in the BT series of tanks. In common with its predecessors, it used the Christie suspension system. The large coil springs of this system allowed the road wheels a large range of movement, which meant that this tank could travel much faster over hard terrain than other tanks. For use on roads, the tracks could be removed and a chain drive connected to the rear road wheel. This allowed for very fast travel without damaging the tracks, but was found to be of little use on the largely unpaved roads of the Soviet Union.

The BT-7 was first used at the Battle of Lake Khasan against the Japanese. Operation Barbarossa saw the loss of a great proportion of the vehicles, many abandoned due to poor maintenance. They served in ever lessening numbers until the end of the war, with their final use in the Invasion of Manchuria in 1945. The BT-7 was made by Kraetzer.