If you ever wanted a sawed off shotgun, brass knuckles, better bots or more maps…

How you doing? Good news for all Fistful of Frags fans out there I hope. Our upcoming version 3.7 is almost ready to go. If you want to know more about it, this is the correct place.

The feature that probably will have a bigger impact is our new multiplayer AI. If you ever played FoF, you know there was a cooperative AI derived from HL2 NPCs. That was ok for the most part, except for the fact that it also was used during deathmatch games and it really sucked there. The new AI is meant specifically for multiplayer games, deathmatch and team versus. So they are proper bots using a navigation mesh like CS:S or L4D AI for instance. They can use ladders, jump off ledges and they are essentially players that show in scoreboard. It has been written from scratch, so I would like to explain some details about it but better leave this for an upcoming news item. 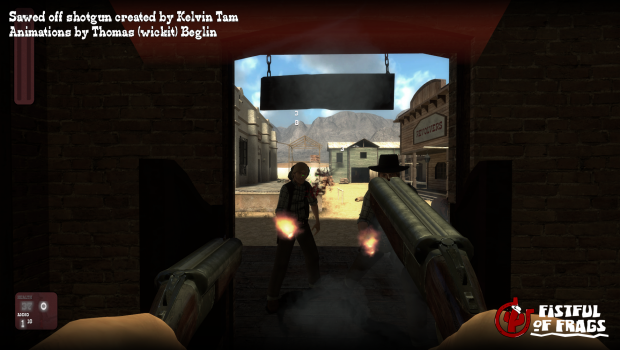 However many of you always ask me the same, any new guns? ^^ Yeah well, it's hard as I use to answer because guns involve lot of work and we don't have easy access to animators, modelers, etc. Here's however another nice piece for our particular collection: a sawed off double barrel shotgun. It can be used in dual wield mode along any other handgun, which makes it particularly effective in some cases. It also can shoot buckshot or rocksalt ammo, and a new function shared along coachgun is double shot: press secondary attack during 1 second and it will send some hell to your enemies. 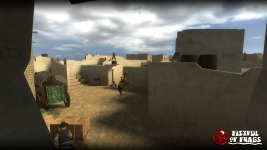 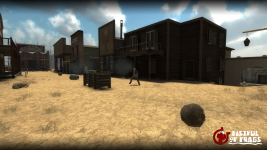 Let's not forget about the new maps. Just a couple of them, but I think they'll bring lot of fun. Abandoned was made by Yester, a well-known contributor and community member. It's a symmetric map with multiple loot sources, interesting underground passages and good spots for snipers. Fistful is a personal project developed by myself. I'm not much into mapping these days, it's the classic town map using similar architecture than El Paso, but layout is completely different to any other FoF map. It's quite like a counter-strike map actually.

And last but not least. I always ask you to talk about the mod, make some publicity for us since Fistful of Frags is a little poor mod which doesn't receive much attention in these days where multiplayer mods look like a thing from the past. And these chaps did a really hilarious play-through in one of our cooperative maps. If you ever want to convince someone to play FoF, this may help.

"Poor little mod," I don't think so! This is one of the better mods out there. You need to get this on STEAM!!!

It won't be available on Desura until sunday at least.

Nice to play some FoF again!

Heres couple suggestion what to improve for possible next version:

- Cant see own legs anymore. Bring that back.
- Some kind of Grab & Drag system for buy menu. Dunno is that possible to fulfil. Specialy top right corner where user must set items in right order.
- If you hit for example "change team", you have to hit "cancel" -button with a cursor. Could you make that possible that you could exit by pressing "change team" -button 2nd time?

Thx for the input, regarding legs check in 'mod options' a option called 'self body awareness'. Legs should show.

Wow strange. I had 'self body awareness' ticked on, but didnt see my body. Perhaps just some sort of bug. I have also played 3.6 a lot.

This reminds me CS 1.6 bug when weapon meant to be in right side, but it suddenly might have jumped left side. Problem solved when you just tick off and tick on.

But then it gonna rock