What started as a piece of fan art which by it's own merit gained it's own fans the creator, Hipnox, decided to take it further. The plan is to make a brand new zed for Killing Floor, a female flesh pound, who is not only aesthetically different but has it's own behavioural functions to set it apart from her male counterpart. Thus, the fan art became concept art and in time a full 3D model had been made and textured. Now all that is left is the animations and implementation.

Spawns
Female FP appears from wave 6, this is because she is middle-tier specimen between Scrake and FP.
Here is the squad table.

Behaviour
We mixing rage requirements between SC and FP, giving her an unique behaviour, not just copy-pasted from Super FP.

Overtime you've grown stronger; we gained access to weapons cache's, upgraded gear, developed new tech and even found lost artifacts of power to counter the endless waves of clones. Well we weren't the only ones who've been upgrading. Kevin has been busy, he's brought something new along, oh it's happened before, you know him as the Husk, and you know how to deal with him. This time though, this time it's different. Refined technology to counter a unrefined nature, a temper that out matches even the Fleshpounds berzerker rage. Once that switch is flipped even a raging fleshpound runs for cover. Funny, those two may have made a cute couple had things been different. Well I hope your new toys are up to the job because she isn't going to hold back.
- Trader just before last orders. 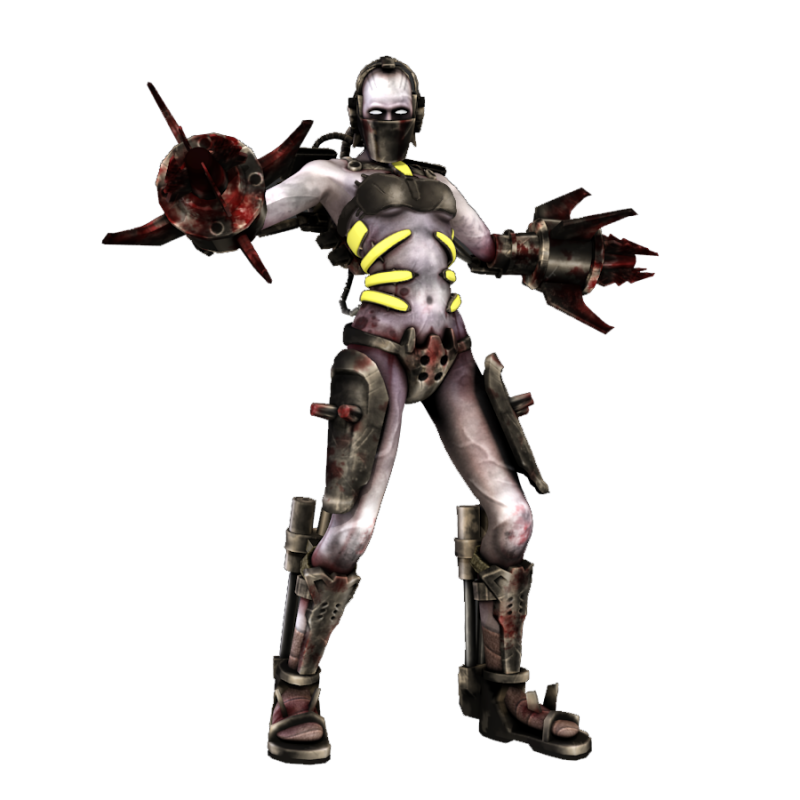 The female fleshpound by Whisky, Hipnox and Poosh is now available to download! We have entered a public beta stage. So the mod isn't fully finished yet but is in a fully playable state. Why not download the mod and give it a go!
New custom ZED for Killing Floor. A Female Fleshpound, she isn't simply a a reskin, she has custom behavour and values to set her apart from the Fleshpound. She may be weaker, yet she is faster and a damn sight more pissed off.

If you find any more please let us know either here, or on the TWI boards.

I like this mod, but I feel like the female falls into the stereotype of "female in game must be naked to draw interest." Her legs, stomach and arms are exposed, as if she doesn't care about armor, just as long as she looks good.

Aside from my personal issues with the design, it looks good and seems to function well. Best of luck.

Do you see any armor on the male fleshpound?
Thought not

Just look at the male fleshpound from the retail ! Do you see any armor on him ? This female fleshpound is 5x more armored than him ! So please stop making your revolted face when you see a little of legs or arms from a woman !

I like her more with that bra than the previous version which seem to me some kind of cheap fanservice...anyway good work.

Looks a bit overloaded (the misc metal is kinda too huge [back of the head for example] and try adding a little bit of hair (for example just like the stalker, all messy) perhaps in another version. And also needs a feet fix. But I like it :]] nice one.

I want it *-*
When it's downloadable?