Vanilla+ improves the graphics, rebalances weapons, adds new features and quality of life improvements, fixes bugs, unlocks dlc and makes subtle changes to the gameplay to add more flavour and variety while preserving the original feel of the game.

Steam, GOG, Ubisoft Connect and the Epic Games Store versions are all supported. Every feature is available in all languages and while using either mouse and keyboard or controller.

Vanilla+ is for people who want an enhanced version of the original game, bullet-sponge enemies included.

The following graphics settings have been improved, the default settings for these have been moved down a tier, so Ultra High is now Very High, High is now Medium etc:

Geometry (Ultra High) - This setting has a huge performance impact. Turn this down to Very High if you have low fps!

Geometry (Very High) - This setting replaces the original ultra high setting as it has a small 1-2 fps impact.

Shadows (Improvements have been added to every setting)

Machete - The machete didn't have a real place in combat as stealth kills would still alert every enemy and it took several regular swipes to kill anyone. It is now useful in both stealth and as a regular melee weapon.

Pistols - I found the pistols were forgotten about once the SMGs were unlocked. They are now more viable.

SMGs - The SMGs were always better than the pistols, so alongside buffing the pistols the SMGs have been slightly nerfed. The MP5 was also by far the worst assault rifle so it has been changed to a secondary, joining the other SMGs.

Shotguns - In the original game they were underpowered and there was no reason to choose them over an assault rifle. They have been completely rebalanced and now excel within 50m.

Assault rifles - Enemies were particularly bullet spongey when shot at range with assault rifles, this should now be improved while maintaining their medium range specialisation.

LMGs - The PKM had way too much recoil and LMGs only became useful with the M249 Saw.

Flamethrower - The flamethrower had pitiful range, limiting its usefulness for both the player and enemies.

Explosive crossbow - The projectiles were slow moving and travelled in a straight line. The explosions are also significantly smaller than the rocket launchers and yet you can carry the same amount of ammo.

Mortar - The mortar is a specialised, high skill weapon. Despite this it had the same ammo capacity as the other explosive specials.

Customisation Options - You can add/customise these options with the included files and instructions. It's very simple and doesn't take more than a few minutes.

Something not to your liking? Want to make your own mod? I've made a guide to Far Cry 2 modding that covers how to change everything in this mod and more, find it here. 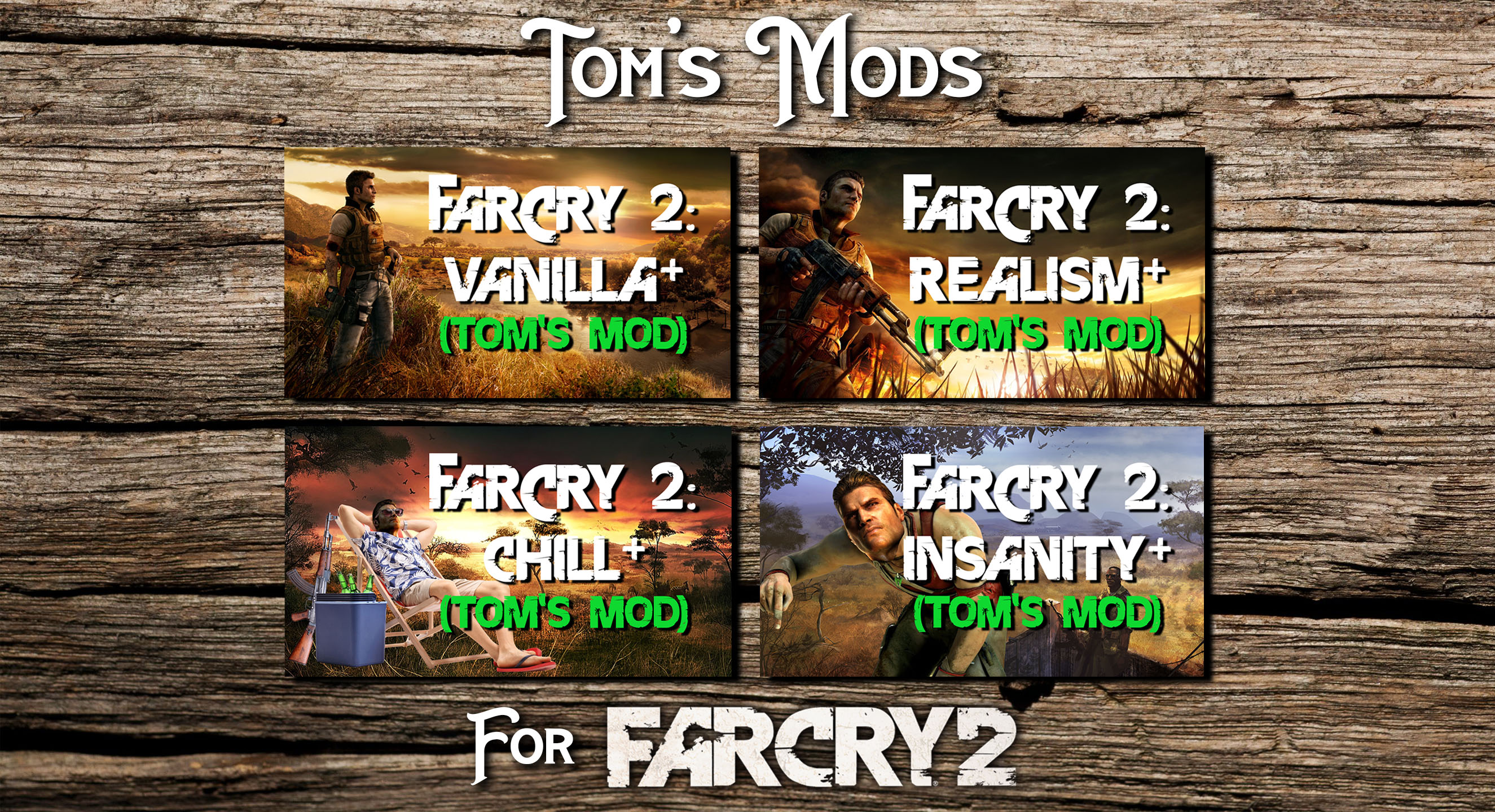 There's been significant progress over the last two years, and in addition to everything above there are customisation options which include a complete ai-enhanced texture pack and a script which stops outposts from respawning the moment you leave the area (thank you to Scubrah).

Come and check out the mod pages for all the details, as there's way too many changes to list here.

There are multiple different versions of the mod available, each has a few key changes on top of everything listed so far:

Chill+ tones down common annoyances like malaria and weapon degradation.

Insanity+ gives superhuman agility like super fast sprinting and crazy high jumping, so you can approach every encounter from a new perspective.

Far Cry 2: Let’s change the weapons in the hud popups!

The guide will cover changing which weapons are shown by the popups that appear during the tutorial, convoy reward screens and weapon shop computer adverts...

Addon that upgrades every texture in the game with AI-enhanced versions.

A guide to show how to install weapon holstering to your Far Cry 2 mod. The files are also available for download.

This guide will explain how to add enhanced healing to your Far Cry 2 game. This is a feature from Far Cry 3 where once you are out of healing syringes...

This guide is for other modders that want to add 100% silent machete takedowns into their own mods using already existing VANILLA files from your Far...

I am enjoying the mod! But is there a way to turn off the blur while sprinting? Thanks

I have a problem understanding the Extra Customisations instructions, on how to install them. Are they really that necessary for a better game experience?

No, they are only optional. The mod comes complete as I have intended it to be played.

Looks like a really cool Mod !
Thanks for making it !

I keep waiting for someone here to unlock the weapons slots.
Give complete freedom to the player to choose any 3 weapons they want to carry, not locked into certain weapons slots only carry this certain weapon.
Mixing things up like that keeps it fun and interesting.

That would be really awesome but it isn't possible with the FC2 code the way it is. They built it with assigned weapon categories and unless a programming expert can come in and somehow undo that then we're stuck with it. Some mods like I believe Infamous Fusion play with it by making the weapons enemies drop belong to different slots than usual, but that's the furthest it can be pushed, at least with current modding knowledge.

Is there a way to revert to the original shop sorting?

Not really to be honest, it takes a lot of changes to make it work. Why do you want to?

In the description, it said it breaks the upgrade menu.
Not just that. I'm aiming for a way to restore other original features, such as the blinking items and the objective arrow on the map.

I prefered the blinking items; it helped me find stuff easier especially the diamond briefcases.

Is there a way to disable enemy infighting or decrease the frequency of it happening? I normally stumble upon an outpost that always has a firefight happening and I feel like it takes away from the main fun of an outpost which was the planning, and when enemies are so unpredictable during combat it's pretty hard to plan something. It also limits the use of stealth as you can only really use stealth when enemies are out of combat. Still a fantastic mod tho

Unfortunately there is no way to easily reduce the enemy infighting. It's totally possible but you need to unpack a few files and edit one directly. If you want to do it I'll happily send some instructions!

Regarding enemy infighting itself, I hear you that it changes the dynamic of carefully approaching and taking out the checkpoints. I wish there were a more nuanced way of editing the patrols but right now we can only changes patrol types as a whole, so every patrol using a certain vehicle will attack outposts or not. This can lead to what you describe where certain checkpoints are under attack every time and the it loses any feelings of being dynamic.

My ideal solution would be being able to set a probability for patrols to attack the checkpoints but with current methods we can't do that, it's more of an all or nothing situation.

One of the great mods currently out for the Far Cry 2 community. Definitely give it a shot if you looked to play the game with a pure Vanilla focus.