The current Patches are causing Crashes to the Game. They are not occuring on my computer, I do not know why but this is making it difficult to identify these game breaking bugs. Not to mention confusing the hell out of me!! 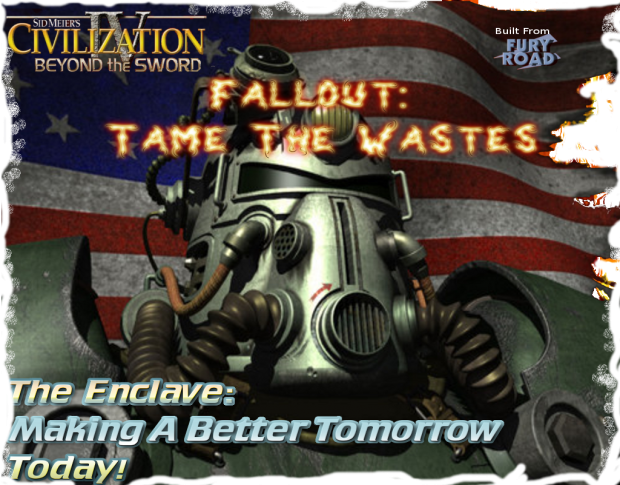 The Better Tomorrow Is not Quite Working Today!

to protest the Shocking lack of Quality found in the

Enclave's Vision for the Wasteland

Caesar is in such a bad mood he has decided to just crash the whole game!

The last two patches have been a disaster and I don't entirely know why.

The issue is being made far more complex and difficult due to the fact that the crashes do not occur on my computer, and although there are function bugs (things not doing what they should) there are no stability bugs when I play on my computer.

This is making it very difficult for me to know that there even is a problem with the game, before we even start on the process of trying to fix it! As well as then knowing whether or not it has been fixed!?!

I was hoping to setup a second machine to test the mod on and thus hopefully replicate the bugs and work out the issues to either fix or avoid them.

Unfortunately it seems that my disk version of Civ is broken or won't install on windows 10 or some other issue. So in short I cannot get Civ on my second machine.

Steam has it but it is currently £15 and frankly I cannot be bothered to spend that on a game I already own! Especially a decade old one! (You had my money already!!!) If I see it on sale I will grab it.

I have someone working on what may well be the underlying issue, but their time is limited so I cannot guarantee when, (or worst case scenario) if they will solve that. They have done wonders in the past so I am hopeful, I just haven't heard anything from them in a week or so. (Again not entirely unusual for their limited time)

So for now I will work on an Alpha5.5 Build which is focussing on updating in game information and providing knowledge on the new rules and questions about the game. (along with any bugs I find and fix)

If anyone wants to volunteer to be a guinea pig for the 5.5 Build to see if I accidentally fix or avoid the major crash issues, PM me.

Your allegiance would be much appreciated.

Maybe I can sell you to Caesar to make him stop throwing a hissy fit!

Stay Safe Out There Wastelanders!

So I managed to get Civ working on my test computer and played my Dev Build without any of the reported CTDs.

I have sent it to a couple of testers to see if they have the same results.

It could just be that in part I screwed up the patch.

I will update on progress!

I continue to chip away on a A5.5 Build.

Ok, so no crashes on 2 of my computers, yet still getting crash report from 2 other testers using as far as I can figure out, the EXACT same build and content as mine, but neither of my computers have a crash.....

I remain at a loss for explanation...

So someone just bought me a copy of CivIV on steam... that is pretty damn amazing!

I still have not figured out the cause of the bug..

My best guess is taht it is an art glitch in the trait code... That still doesn't explain why it does not crash for me but does for everyone else...

I am going to install the latest build into the steam version and see if I can make that one crash for me!!!

So I got it to crash!

Though not exactly what I would call good news, I at least now have a platform to experiment on rather than having to poke it, give it to someone else and wait to see if it goes BANG! Then prod another one and repeat!

I am still no closer to guessing what the hell is actually going on, but I shall contnue to prod everything I can think of!

So I and a second person have now been able to use a new stable version, my other testers still report crash instability, so I am trying to work out why it is no good for them at the moment...

After that is resolved hopefully it will be full steam ahead for a A5.5 Build! In time for Christmas!

Hooray, the crash seems to be fully resolved. I cannot fix the underlying problem on my own, but it can at least be avoided until can recruit someone to help!

So now I just have to find the umph to march onward to fulfil the A5.5 Plan before Christmas!

For anyone who checks these.

I am rushing as fast as I can to put together a 5.5 release in time for christmas.

It won't be as thorough or complete or polished as I hoped. (Due to health, energy and time restrictions.)

However when added together with all of the content from the broken patches, I think it will still be a significant jump forward in terms of content, not to mention being actually properly stable again thanks to the return of the Mega Modder to the team!

I will save giving any more details for a News Release!

I think my one goal now will be to finish the Faction Specific Unit Select Sounds.

I still have 6 factions sound sets to create, edit and implement in game.