Yes, its 60 new levels within 6 slightly-different episodes in different order. 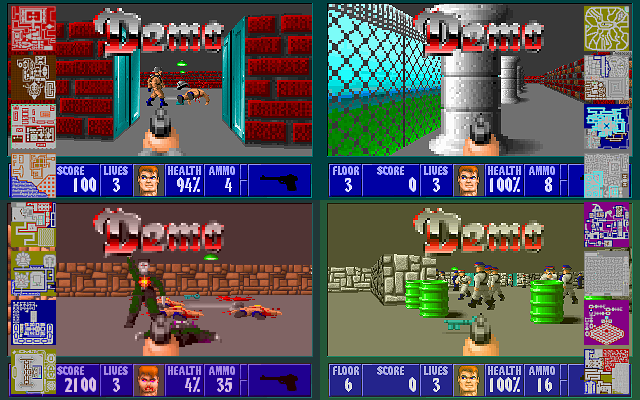 Only slight modifications I have made with graphics just to fit the needs of the new concept.
And that is why I am originally not intended to touch the executable itself, but since so many things was hard-wired into the program's code,
I felt the necessity to do some modifications with the executable, and because I was there, I fixed some annoying old bug which lurked within the original game.
There are hidden music tracks from the original game I used with BJ's Destiny.
I kept the original structure of game files. There are no ugly external demo and/or text files beside the usual names.

As for the levels, I tried to do my best to make them juicy within the existing limitations.
I arbitrary followed or breaked the original level design conventions.
For example: I notoriously used to extend the very limited map space with using smaller wall spacing against texture diversity,
used starting lifts for some leves to keep continuity straightforward.
I have made experiments to find (hopefully) interesting capabilities in the original game that I could bring forth through my map designs.
For example: The ability to make a wall multiple pushable, to make a Pushwall Puzzle, to do the Follow The Guard -trick, etc.

So I think its worth to play to you, steady Wolfenstein-3D / SOD fans, to find out the hidden things you could only dream with until now..
Yeah, it comes with a 17 page "WEX60 Hint Book" in PDF format!

And for those folks who are not in (yet), do not hesitate to get acquainted with the original game!

All the best, let's have fun!

Hi guys! This is the new release of the BJ's Destiny / WEX60, which contains Map fixes and Handbook improvements!

This is a brand-new unofficial level package and alternative story with a few modified / new gfx for you, Agent Blazkowicz, made by The Torpid Rodriguez...

Map problems:
1. E1L3 The Gold Key was not always obtainable due to the pushwall reassignment bug. Fixed.
2. E1L3 In certain cases not all treasure items could be obtained due to the pushwall reassignment bug. Fixed.
3. E3L2 L2 to L3 continuity glitch: dead guard disappeared from the elevator. Body has been removed.
4. E3L4 Officers in the small brick room not always awakened. Redesigned.
5. E4L1 Keys was too easy to find. The keys have been replaced.
6. E5L6 This level was impossible to complete in certain cases due to the pushwall reassignment bug. Fixed.
7. E5L6 Situation could be unclear to the player, because Hans was not in the right place. Realigned the room interior.
8. E6L4 A pushwall could be sent through a door, and that could cause glitches. Door has been replaced.
9. E6L4 Every fake elevator had a Mutant, and that was numb. Removed some of them.

Misc:
1. The icon for the first episode was not framed.
2. Eye color not fixed at the H icon.
3. "Wood Panel" map tile had its original simbol.

Handbook: Have changed according to the modifications, and changed some silly thing.