Europa Barbarorum is a total conversion for Medieval II: Total War: Kingdoms and successor to Europa Barbarorum for Rome: Total War. The aim is to give the player an even better gaming experience compared to EB1 on the RTW engine and a deeper comprehension of the ancient world and its correlations.

New version is up. Download is under files. If you find any bugs post them to TWC. Have fun.

Once again, it's been a while since the last major release; indeed we'd intended this to be a "summer release", but it turns out it's closer to a Christmas release instead. Unlike professional games companies who are forced by arbitrary deadlines to drop a product regardless of how finished it is, we wanted to make sure this was a good one. The amount of playtesting and bugfixing that has gone into 2.35 dwarf that of 2.3 and earlier releases, so rest assured there will be no Day One patch. This is without doubt the most stable iteration of EBII we have ever released. We are confident that with a proper installation and doing your own research, you should have no problems finishing your campaign.

As ever, we still expect people to find things that have been overlooked; while we have new tools and more internal playtesters, there are things we may have missed, or which need a longer play-through to appreciate the impact. Use this thread to report your feedback, if you have any bugs, use the appropriate subforum. If you feel inspired enough to do a Let's Play or the like, let us know so we can promote it.

Given it's been longer in development than planned, there is an awful lot of new content. We didn't call this 2.4 because we haven't even touched one of the major goals for that release, that being to complete the remaining faction slots. Some factions have been revamped for 2.35 - either browsing the changelog or else giving them a spin will make it clear. Many factions have also had new features added, and there are 40 new units to play with across a broad swathe of the map. We think you'll find it's been worth the wait.

If you are new to EBII, please make sure you read the opening pages of the Player's Guide (included in the root of your EBII installation), and those specific pages relating to the faction you intend to play. This will give you some understanding of the features unique to that faction and give you some idea of what to look out for.

As always it's necessary to be absolutely explicit about this point:

THIS RELEASE IS NOT SAVEGAME COMPATIBLE

This is a complete installation, it's best if you remove any previous versions of EBII you have installed.

Before we get into the details, it's necessary to reinforce an important point: the installation instructions are lengthy and detailed because they need to be. We gathered all this knowledge the painful way, through bitter experience of what does and doesn't work with this clunky old game and the myriad configurations of platform and medium out there. These instructions are not optional, if you do not follow the right ones for your machine, it is highly likely the game will not function properly. If you do not follow the instructions and get issues, we will not be able to help you until you've conformed with the instructions.

These appear in the Player's Guide which is bundled with EBII, but for completeness they are repeated here.

2) Install Medieval 2 Total War and the Kingdoms expansion (at least 1 mod) outside of C:\Program Files. Use a short directory such as C:\M2TW as an example.

4) Start the game and start a campaign, then quit. Do not skip this step.

5) You can change the game settings to your favourite key bindings, graphics, unit size, camera, ect.

1) [Mac and Linux] Steam has the Feral Interactive version of M2TW Kingdoms which will run better on your operating system. You still need to complete the post installation instructions after installing M2TW Kingdoms and Europa Barbarorum II.

2) Do NOT Install Medieval 2 Total War and the Kingdoms expansion in the standard library C:\Program Files\Steam...

Install
You can make “F:\Steam Games” the default install before you download Medieval 2 Total War and the Kingdoms expansion, then change it back when you are done. Steam Menu > Settings > Downloads > Steam Library Folders > right click “F:/Steam Games” > Make Default Folder.

5) Update the game to version 1.5. Steam should do this automatically, or the game is already 1.5

6) Start the game and start a campaign, then quit. Do not skip this step.

7) You can change the game settings to your favourite key bindings, graphics, unit size, camera, ect.

8) Installing other mods is not recommended

[Mac] Mac users are assumed to have wine to run the installer exe with. If not there is a ZIP version to download which means you will not have to use the exe.

1) Uninstall any previous versions of EBII (there's a shortcut for it in your start menu).

2) The downloaded file is a zip archive, which means you need to unpack the installer files from the zip file. Windows Explorer should allow you to simply copy the contents out. If not, you can download 7-zip for the purpose.

4) Step through the install wizard. Make sure the installer is pointed at your M2TW directory such as in our CD example “C:\Games\M2TW”or Steam example “F:\Steam Games\steamapps\common\Medieval 2 Totalwar”You need to change it from the default if it is pointing at Program Files.

5) Wait for the installer to copy all the files.

6) If you did not start a M2TW vanilla campaign after installing it, run that now. Start a campaign from Medieval.exe, then quit.

7) Run the mod using the shortcut placed in your start menu or desktop.
[Steam] You will need to insert a short code (4. Starting EB2 for the first time)

[Mac & Linux] If you do NOT have Feral Interactive M2TW You will need wine to launch the mod using the wine console command. (4. Starting EB2 for the first time)

8) Start a EB2 campaign. WAIT for the game to generate the world, the game has not frozen, then quit.

9) There may be a “Fatal Graphics Error” and crash to the desktop when you start the campaign only on the very first time. This is normal, just start the game again.

2) Delete your settlements folder in share/data/mods/ebii/data. You play with vanilla settlements.

3) Move or paste the no_banner.mesh into medieval2data/data/banners (the folder you just created)

4) Move your settlements folder in m2tw/data/mods/ebii/data to your desktop.

5) If you have a problem saving the game you can create the following folder in the following directory:Library/Application Support/Feral Interactive/Medieval II Total War/VFS/Local/mods/EBII/saves

6) Once you have created it, give permission to all users so that they can each read and write to the folder.


4. Starting EB2 for the first time

There should be a shortcut on your desktop.

[Mac and Linux] The following instructions are for those who do NOT have the Feral Interactive version of Medieval 2 Total War Kingdoms.

[Linux ] You will need wine to launch the mod using the wine console command(note this directory must match what you named them) Code:wine cmd < share/data/mods/ebii/launch.bat

[Mac] You will need wine to launch the mod using the wine console command.(note this directory must match what you named them) Code:wine cmd < medieval2data/mods/ebii/launch.bat

The Error Log
Make sure your error log is working properly so you can properly report any issues.

This means the log will be stored as eb.system.log.txt in [your M2TW directory]\mods\EBII\logs\. We will need this log any time you report an error.

If you get a consistent reoccurring error change the code to:[log]to = mods\ebii\logs\eb.system.log.txtlevel = * trace

This will record every process the game makes and hopefully help us identify the exact causes. Don't forget to change it back when you are done because this detailed level of recording takes up lots of memory and causes crashes.

The Error Log is often very large so compressing it into .zip or .rar archives is a good idea.

If "1" doesn't work, try "true" instead. Note you'll have to enter your native resolution in there to get a proper-sized window. You also need to ensure your medieval2.preferences.cfg doesn't have conflicting values.

Alternatively, we've bundled a windowed mode/fullscreen mode switcher program in with the installation, it looks thus: 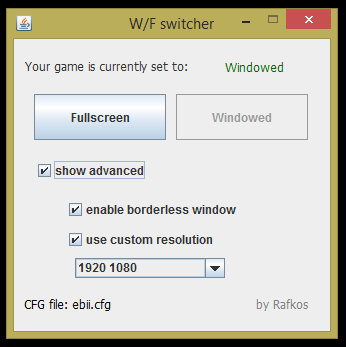 All you should need to do is click the Windowed button.

Auto Save Corruption
The game auto saves at the end of every turn but it there is a chance of corrupting the save file and crashing the game. Autosave can not be relied upon to save a long campaign.Open this file, [your M2TW directory]\mods\EBII\EBII.cfg with Notepad++ and make sure it has this code under [Game]: Auto_save = 0

Save often and keep a trail of saves. You can use Ctrl+S for quicksave

Old Software
It's common users encounter technical issues while using old software like M2TW. It's only designed to address 2GB of RAM regardless of the users actual hardware capabilities and that limitation can cause stability problems with large mods like EB2.

There are 3rd party utilities which can address this problem, but there might be legal ramifications and any software modification is potentially problematic, so users should do their own research and make their own independent decisions.

Memory Leaks
The game will increasingly hog more memory as the turns pass by. After a few hours the game may crash or cause the graphics to switch around. If you see buttons that are replaced with faces or buildings immediately save the game and quit to avoid imminent crash. It is a good idea to save and quit every few hours to empty out the memory.

Keep error log on *error
In the [your M2TW directory]\mods\EBII\EBII.cfg file you should be playing with the following code that is set to log errors only:

Leaving the log on trace takes up lots of memory and eventually causes crashes:

Though it is useful for tracking down consistent errors, don't leave it on when you are enjoying the game.

Different Captains to Generals in the campaign

2.35 has a complete set of "Captains" that are different from the Generals. However, they are disabled, because the file in question, the descr_character is an either/or choice. Either you have proper generals in Custom Battle, multiplayer and historical battles (and no distinction between Captains and Generals in the campaign), or you can get a distinction between Generals and Captains in campaign battles only (but in the other three you always see Captains).

If you want the latter, download this and put it in your mods\ebii\data\ folder: descr_character.txt

As always, back up your file so you can revert before you apply this. Note this is NOT savegame compatible.

The EBII team are volunteers who contribute their time and energy for free, and we don't want to change that. However, from time to time, we do elicit donations to cover our costs. These are for server hosting, which have come due recently. If you liked EBII enough to feel like you want to help the team, please see the link at the bottom of the EB website. 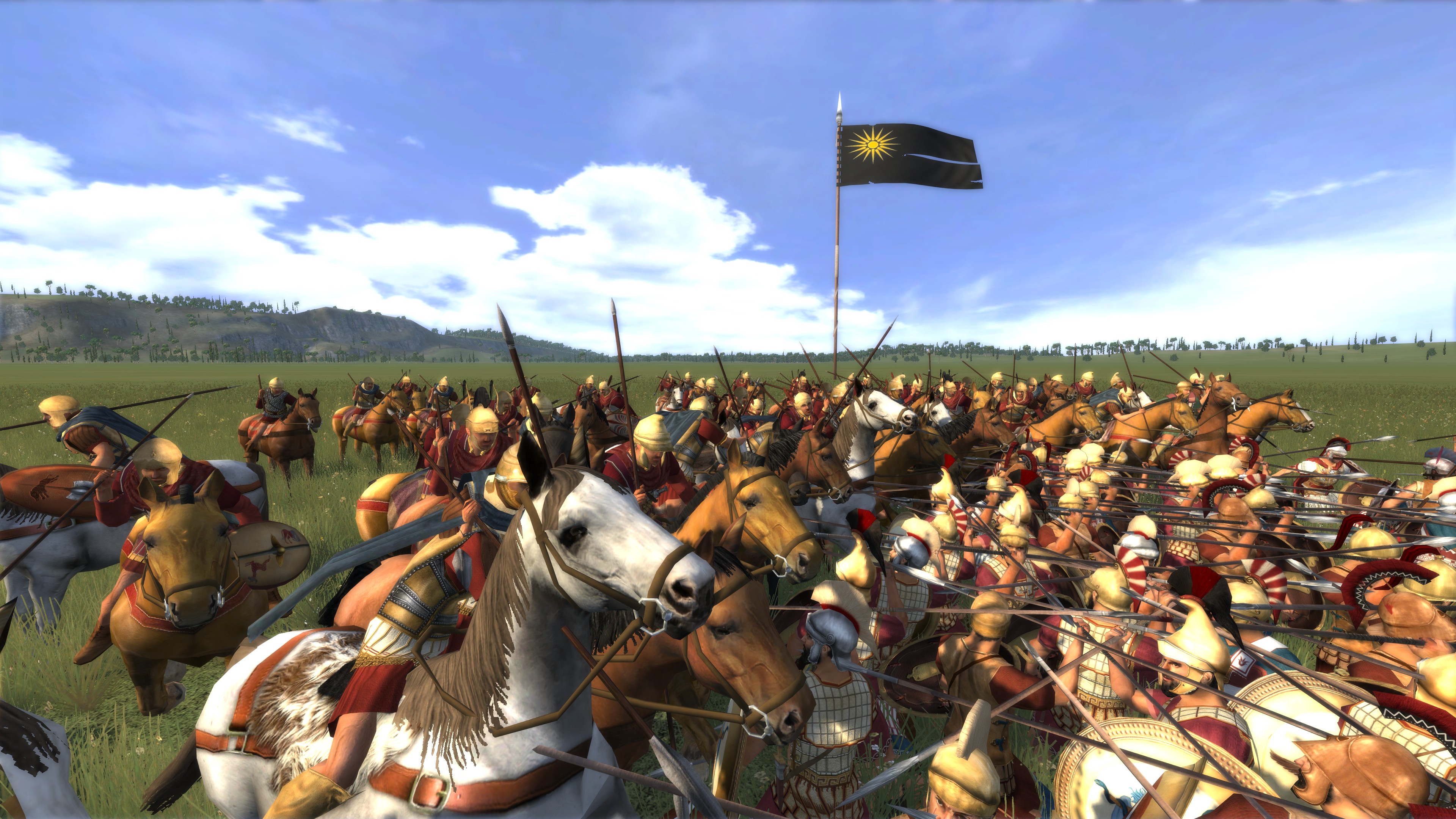 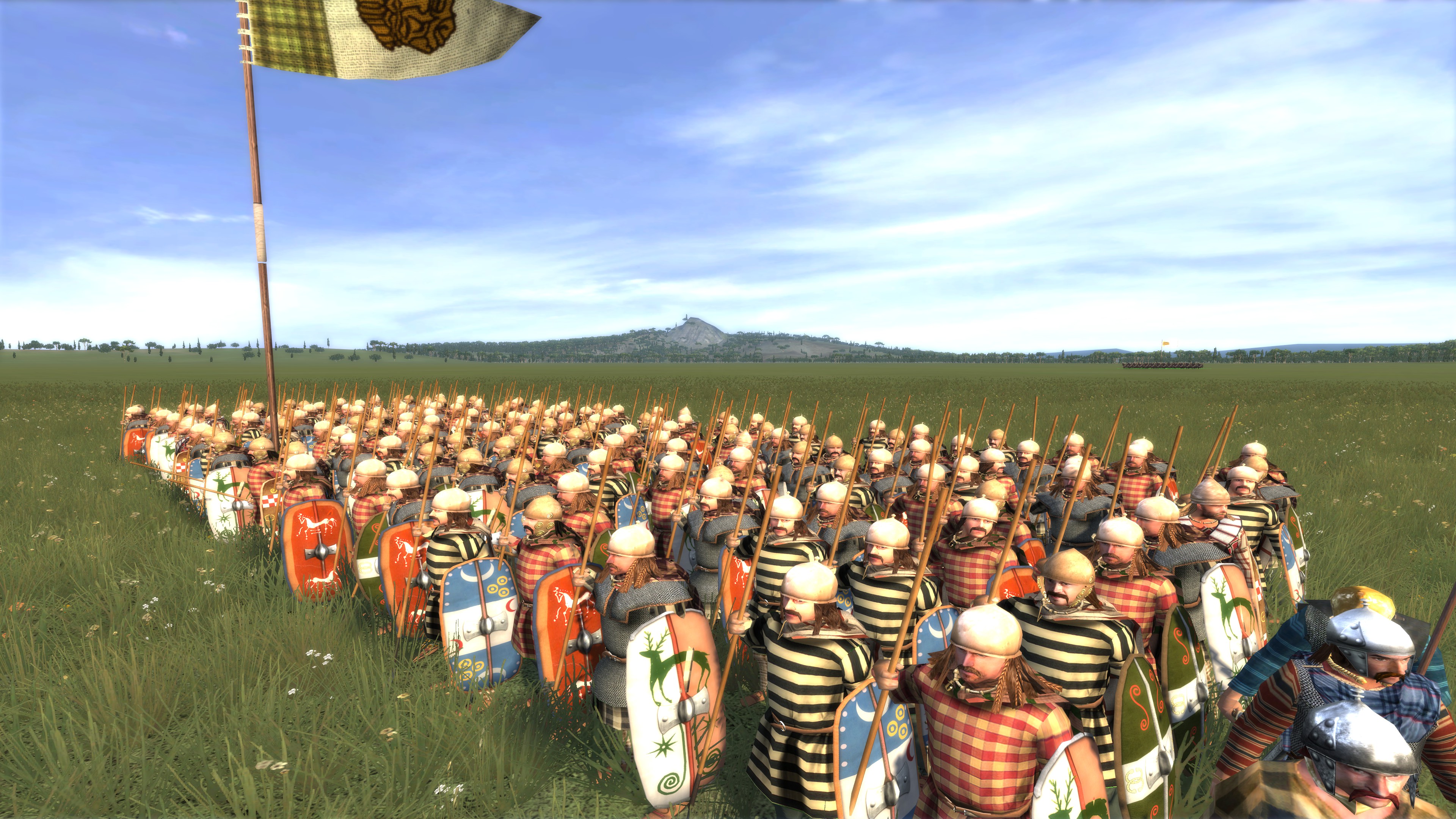 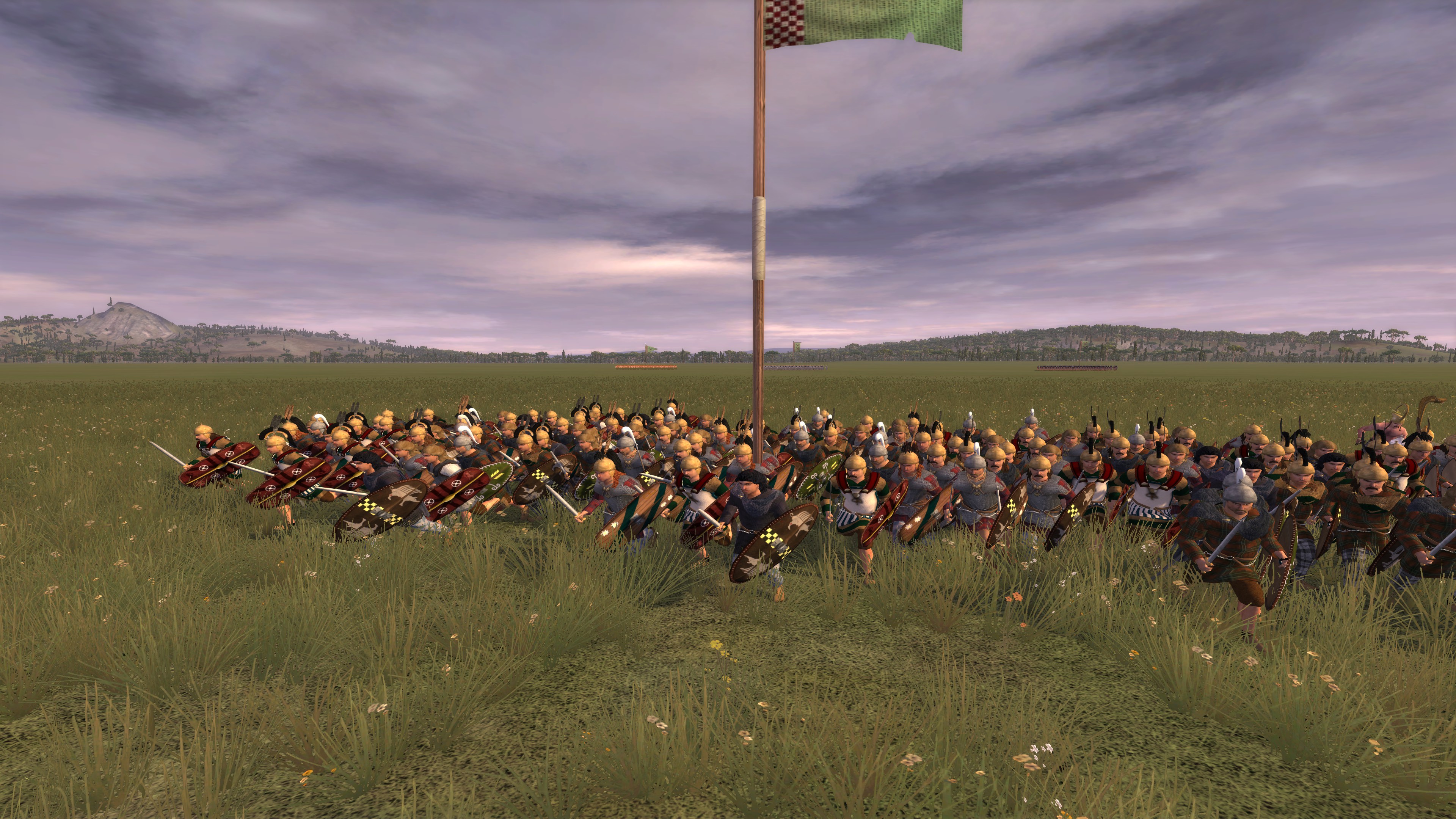 Please also see our main feeds, featuring all the past previews, and where new material will appear:
Twitter
Facebook

As ever, thank you for your support and remember to read more history.

Thanks a lot for release! It's always great to see that med2 gets love!

How do you trigger Marian reform for Romani?