Enderal - The Shards of Order is a total conversion for Skyrim and the sequel to Nehrim: At Fate's Edge by SureAI. The story of Enderal is not set in the Elder Scrolls world of Tamriel, but takes place in its own universe, creating a new, interesting world completely unrelated to Skyrim with a complex, dark storyline and thousands of secrets to discover.

"Dreams of the Dying" - An Enderal web novel

Spanish, German, Russian translations and an E-Book version are available on my Patreon.

It's been a while, but I genuinely think some of you might be interested in this project - I (Nicolas Lietzau, writer of Enderal) recently launched my web novel series, "Dreams of the Dying."

What's "Dreams of the Dying?"

"In a nation where wealth equals worth, a mercenary, a priestess, and a psychic must enter a merchant king's mind to prevent a civil war."

“Dreams of the Dying” is a spin-off web novel to Enderal. It’s the first installment in a free-to-read series called “Every Day Like the Last”, that explores the past of Jespar Dal’Varek, one of Enderal’s protagonists. 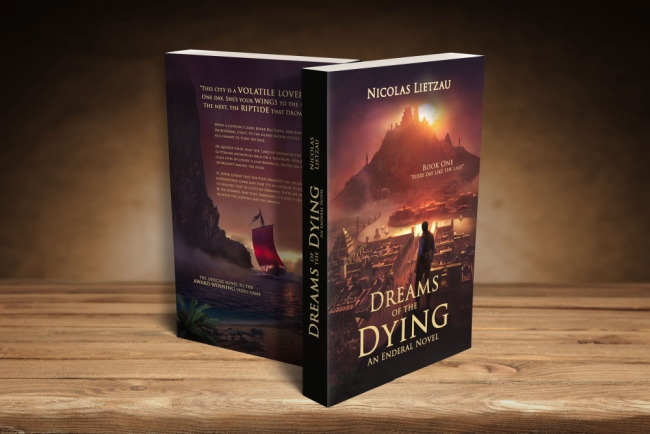 I release one chapter each week, free to read here on Patreon and on Wattpad. The book will always be available for free, though there are some perks that come with being my Patreon. I also plan to release a paperback version at the end of each season. A season lasts between 4-5 months, depending on the number of chapters.

If you've enjoyed the writing of Enderal or the novel, I'd be grateful for a donation/pledge. If you can't afford it and still want to support my writing, no problem - simply read the book, spread the word by telling your friends about it, or leave me a vote/follow/comment on WattPad(which helps to extend the reach beyond the Enderal community.)

Also, if you'd like to be informed about the state of the novel and the paperback release later this year, consider subscribing to my newsletter.

If any of this sounds as though it might interest you, feel free to head over to my Patreon to check it out - or start right away by clicking the link at the top of this post. :)

I appreciate every reader!

Happy Reading and thanks for your amazing support,

Second Devblog of Enderal's DLC with the new class "Phasmalist".

Our first devblog for the upcoming DLC Forgotten Stories.

Enderal has been nominated at the SXSW Gaming Awards as "Fan Creation of the Year"!

Installation file for the Spanish version of Enderal. You need the Enderal Launcher in order to install it. Visit enderal.com to download the launcher.

Installation file for the Portuguese Brazilian version of Enderal. You need the Enderal Launcher in order to install it. Visit enderal.com to download...

Installation file for the Italian version of Enderal. You need the Enderal Launcher in order to install it. Visit enderal.com to download the Launcher.

Installation file for the French version of Enderal. You need the Enderal Launcher in order to install it. Visit enderal.com to download the Launcher.

Installation file for the Russian version of Enderal. You need the Enderal Launcher in order to install it. Visit enderal.com to download the Launcher.

Installation file for the English version of Enderal. You need the Enderal Launcher in order to install it. Visit enderal.com to download the Launcher.

Unless this Enderal is complete, the Classic requires the original Update that is no longer available on the Nexus.

Ah, the infamous game that everyone seems to hate yet keeps playing. I was never a fan of this "low-hanging fruit", but I kept playing as to see if I could give it the benefit of the doubt. You know, maybe the gameplay was good enough to forgive the cliché-ridden poor excuse of a story it had going for it, but boy was I wrong. I could say more, but this has already been battered enough. After all, maybe the developers have learned the error of their ways!

Lol as I thought a bunch of troll comments and nothing else.

does it work on xbox one?

Will forgotten stories ever be available for download here on MODDB?

Hi, could you please upload Forgotten Stories here as well ?

Steam is so pervasive it is just Cancer. I don't use it either (nor GOG, or any other platform that requires me to install an app through which to use stuff hosted through them for that matter).

Among other things it makes full offline play and installations whenever without internet impossible or overly tedious.

if this move was made for ease of downloads, then you could have just made a direct download or magnet link. The installation and patching process was simple already.

+1,000,000 I do not use Steam. Bought a dozen or copies of Skyrim over the years and do not want to register anything with Steam nor install their software.

I would vote this up a million times or more, sadly the site allows only +1 per person.

A torrent of each update would be great. Then people can have an update archive if they want it.

Great level design, great quests, magical radiation. If I had any complaint it's that the combat is still Skyrim melee combat, but that's a dig more on the base game, and doesn't reflect against the mod itself. Definitely worth getting.