This mod based on Frank Herbert's epic Dune saga, features a struggle to control one planet - Dune, Arrakis, a barren desert wasteland which is valuable for one thing only - the spice melange. The spice has the universe addicted to it; it extends life, it allows for the Navigators of the the Spacing Guild to fold space, travel from one point in space to another without moving, it is the basis for the economy and trade of the known universe. The spice is created by Sand Worms, giant creatures that live their whole life in the sand. The mysterious Fremen worship the worms as Shai-Hulud, the Great Makers. Dune Wars is a total conversion of Civilization 4 : Beyond the Sword. Features include: + 9 playable factions + Spice and Harvesters + Massive sandworms roam the desert + Pay the guild to transport troops from your homeworld + Water, Offworld Trade, Unique Civ Abilities, Terraforming and more... Are you ready to become the sole ruler of Dune, and in turn, control the universe?

Thanks for voting and helping Dune Wars on it's quest to become the 2022 Mod of the Year. You are now in with a chance to score some free games from our #modlove collection. Help this mod secure more votes by embedding the widget (or link) we have included below on your favorite sites.

To celebrate the release of Denis Villeneuve's Dune film, this patch adds content from the new movie to Dune Wars: Revival 1.10, including 3 new leaders and several cosmetic improvements. Here is a summary of the changes in the latest version of the patch. 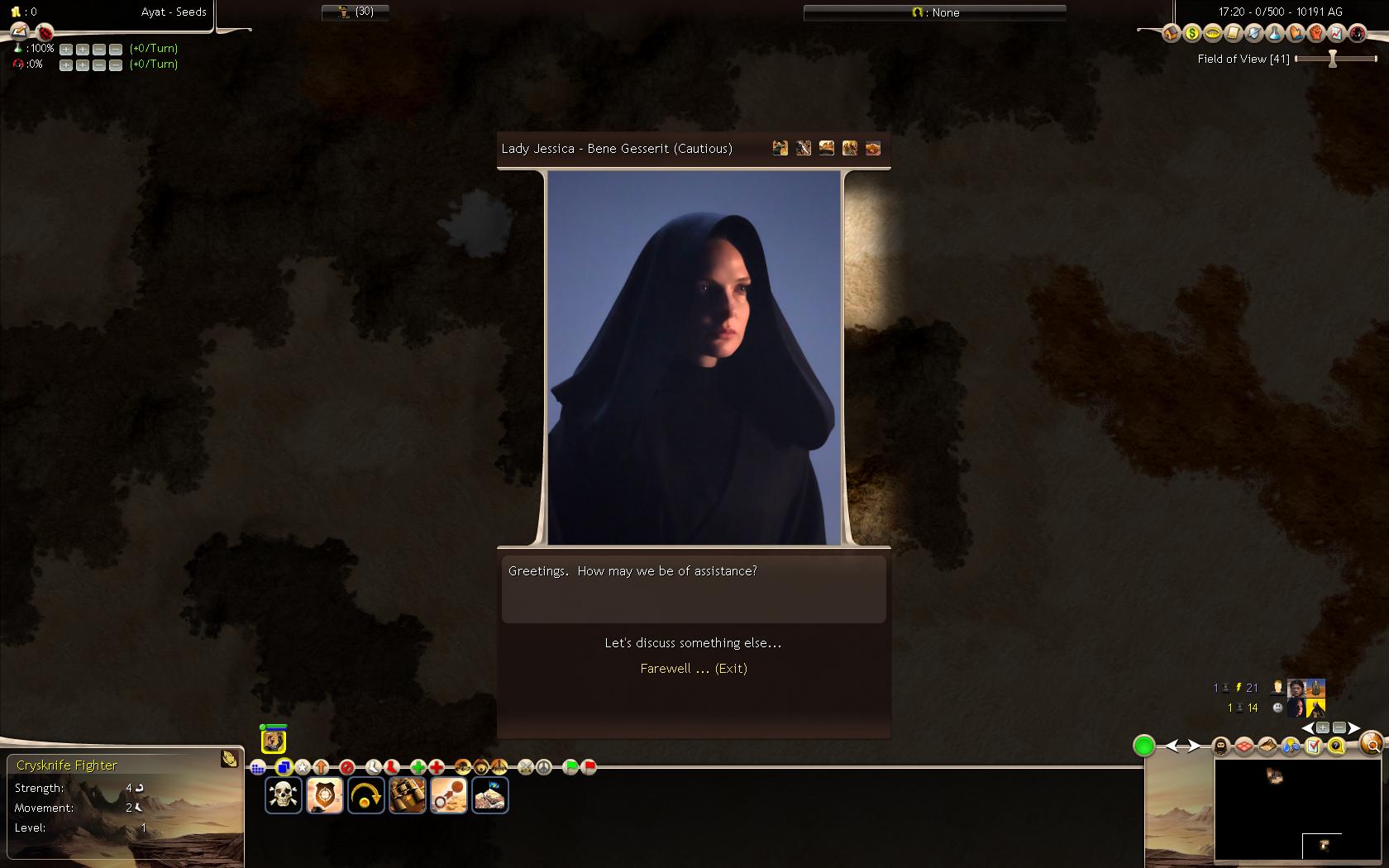 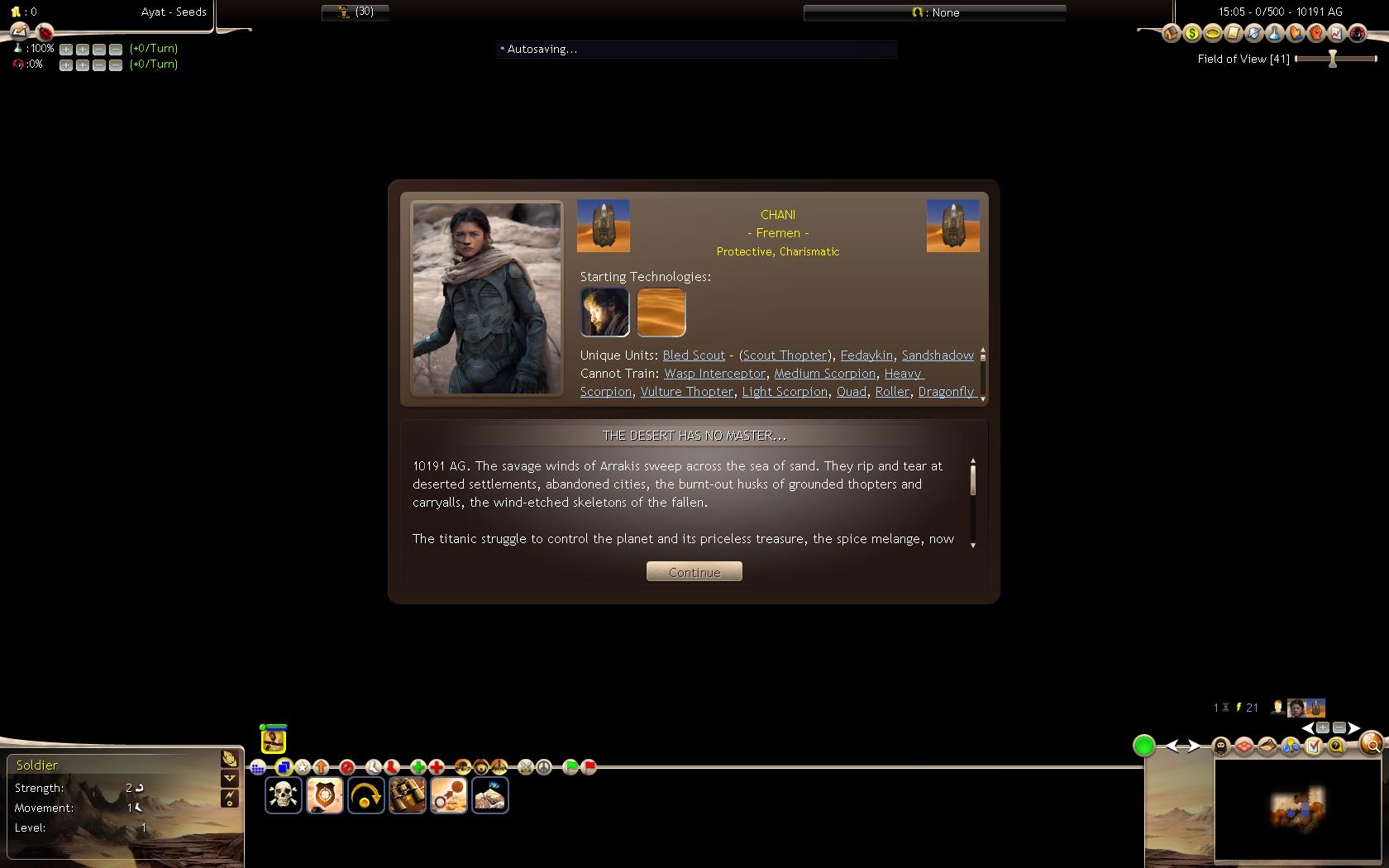 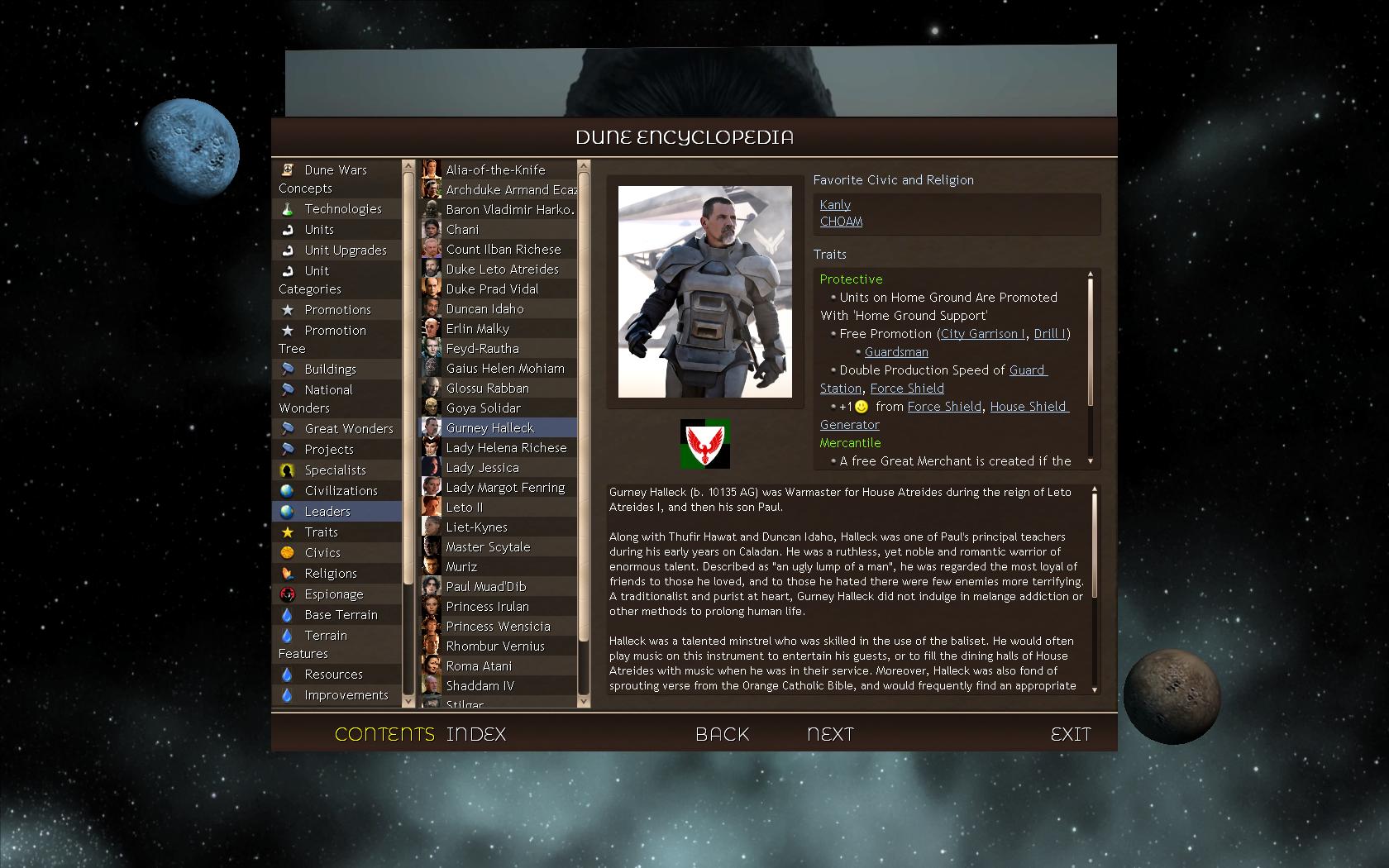 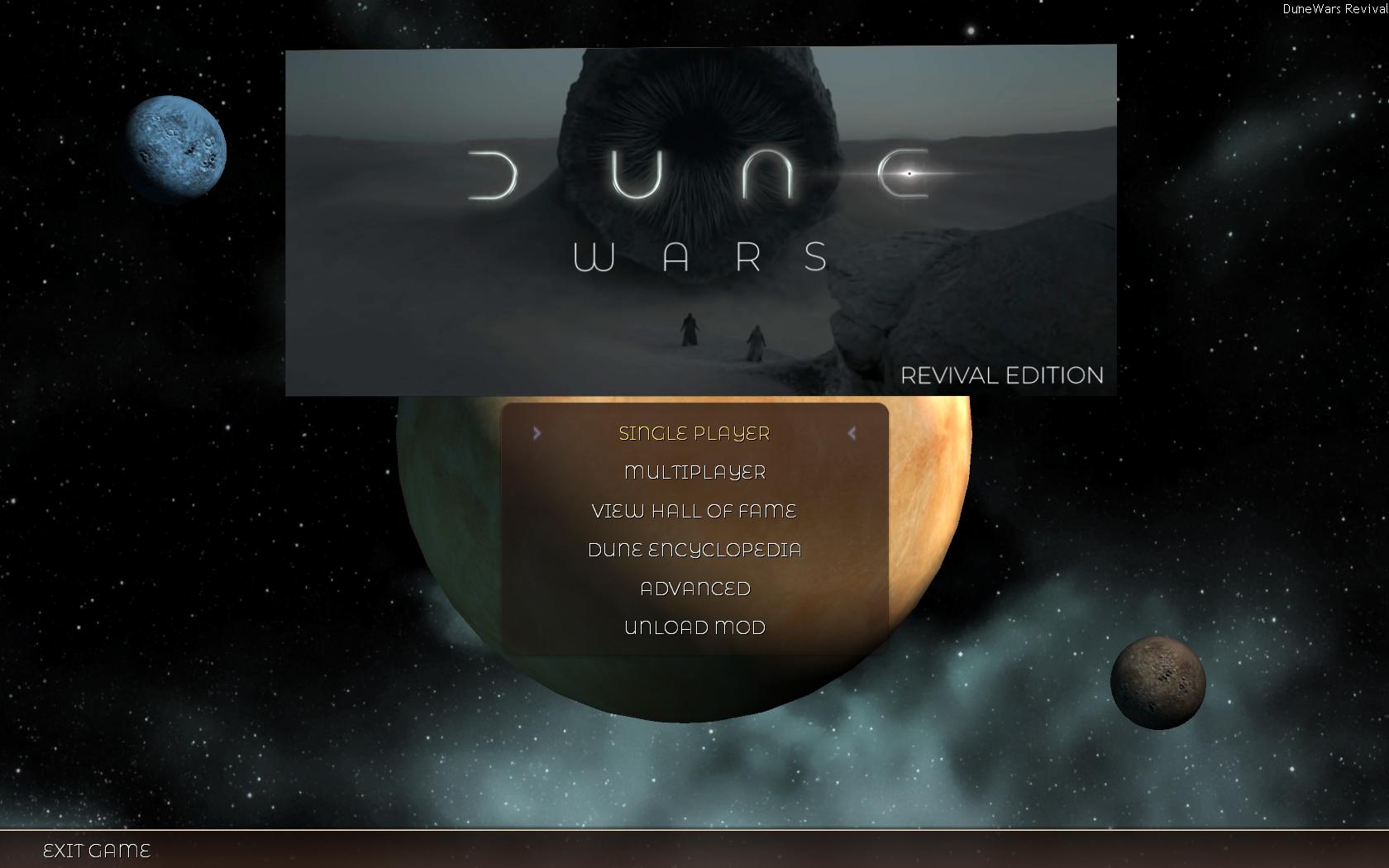 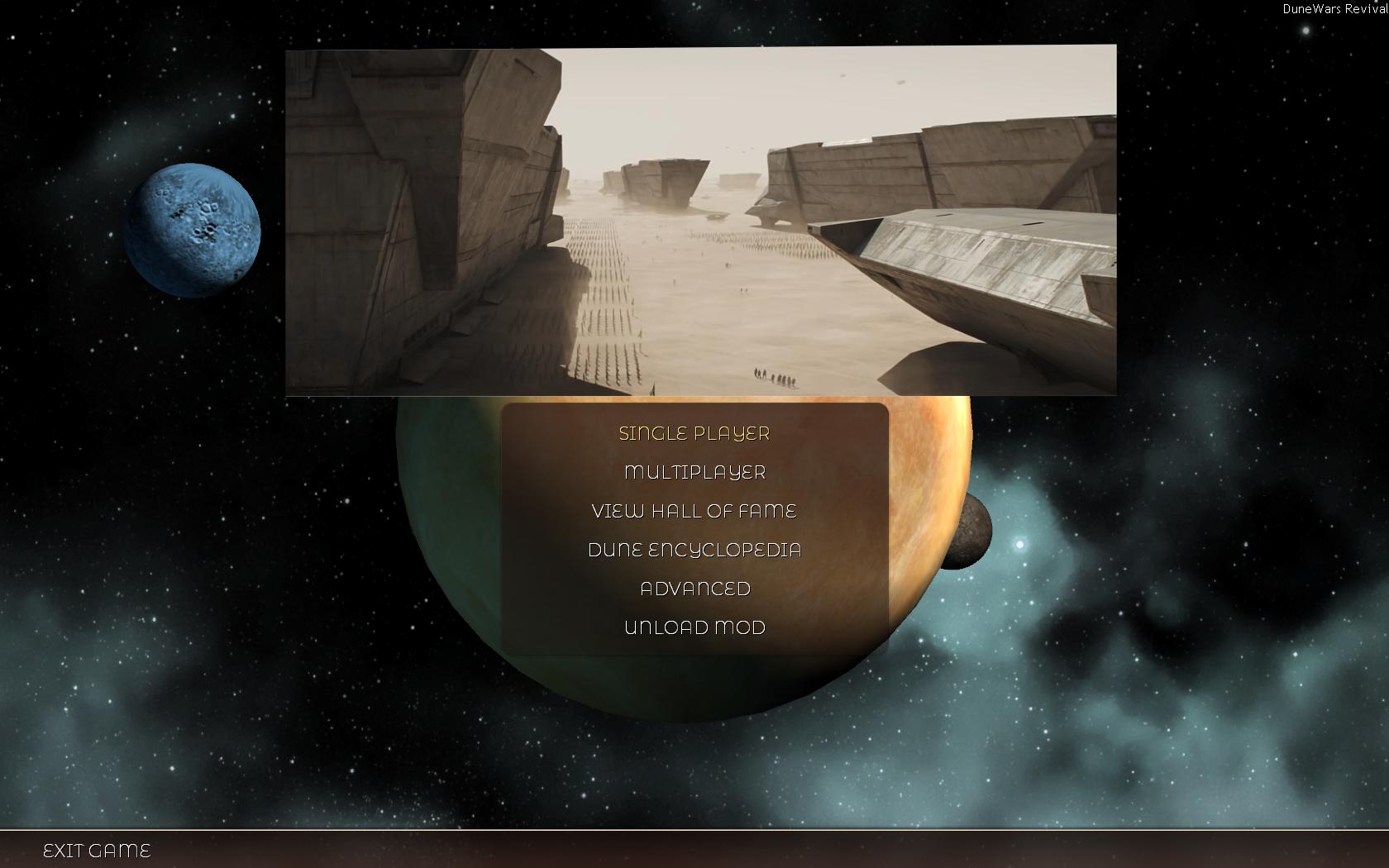 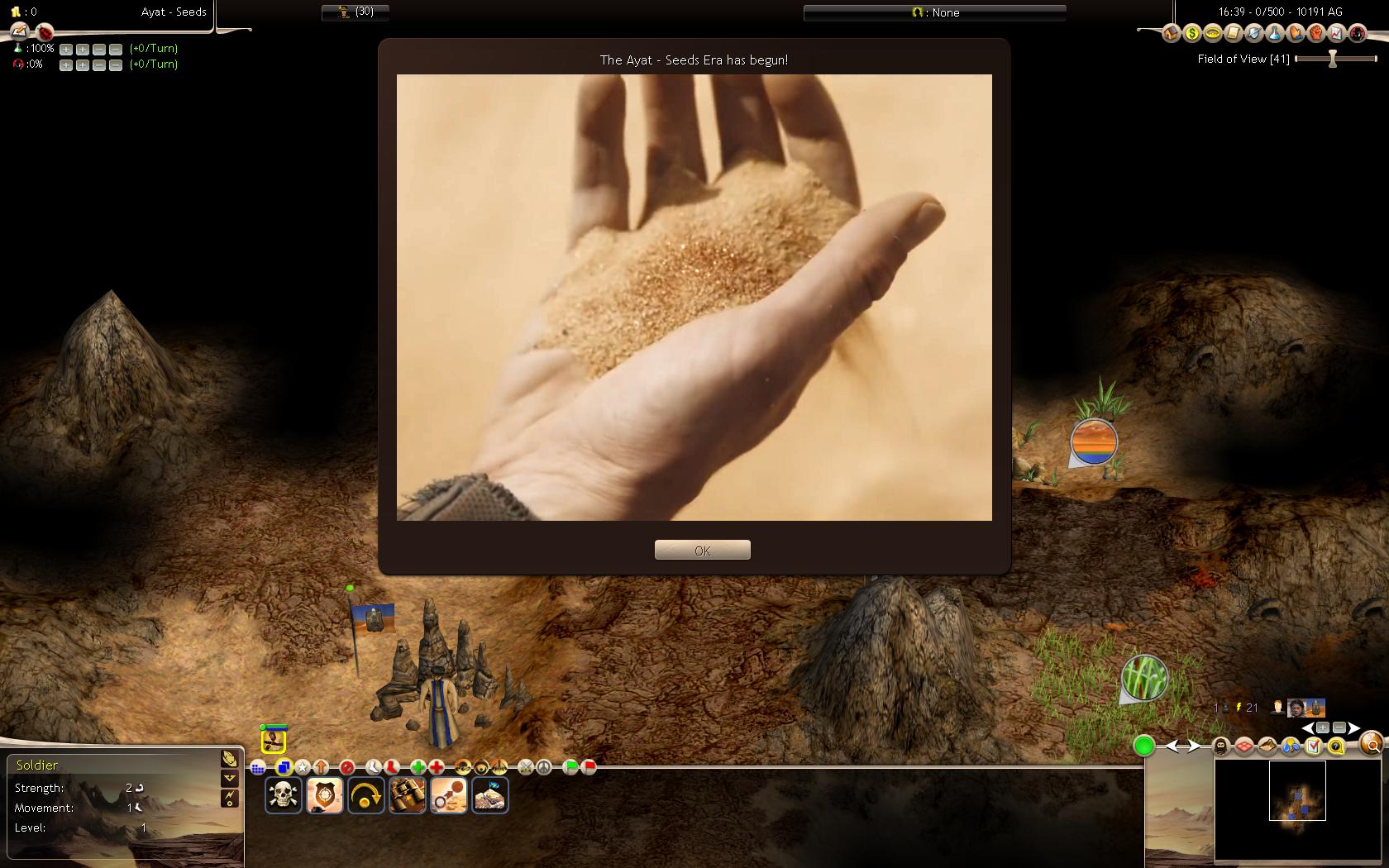 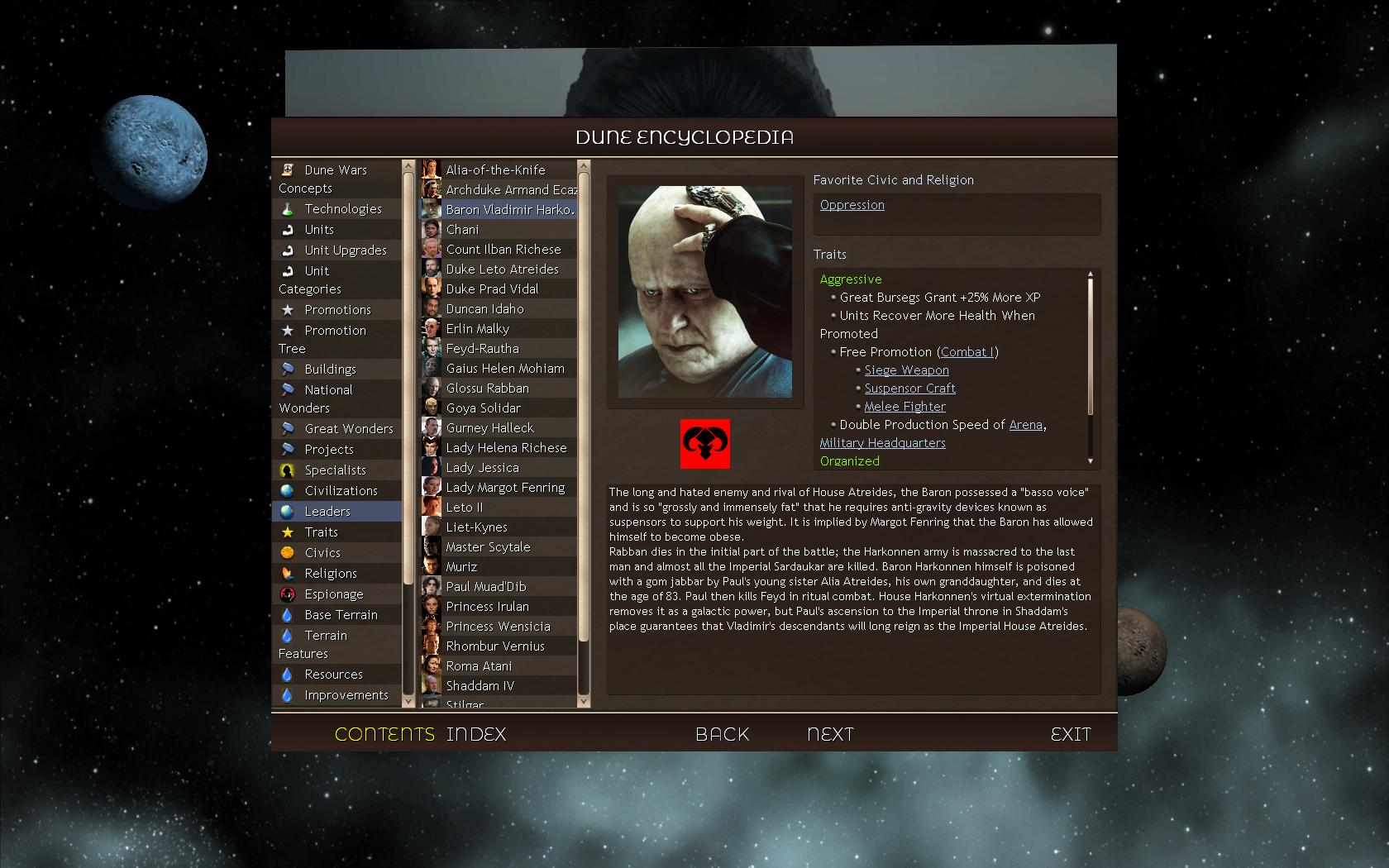 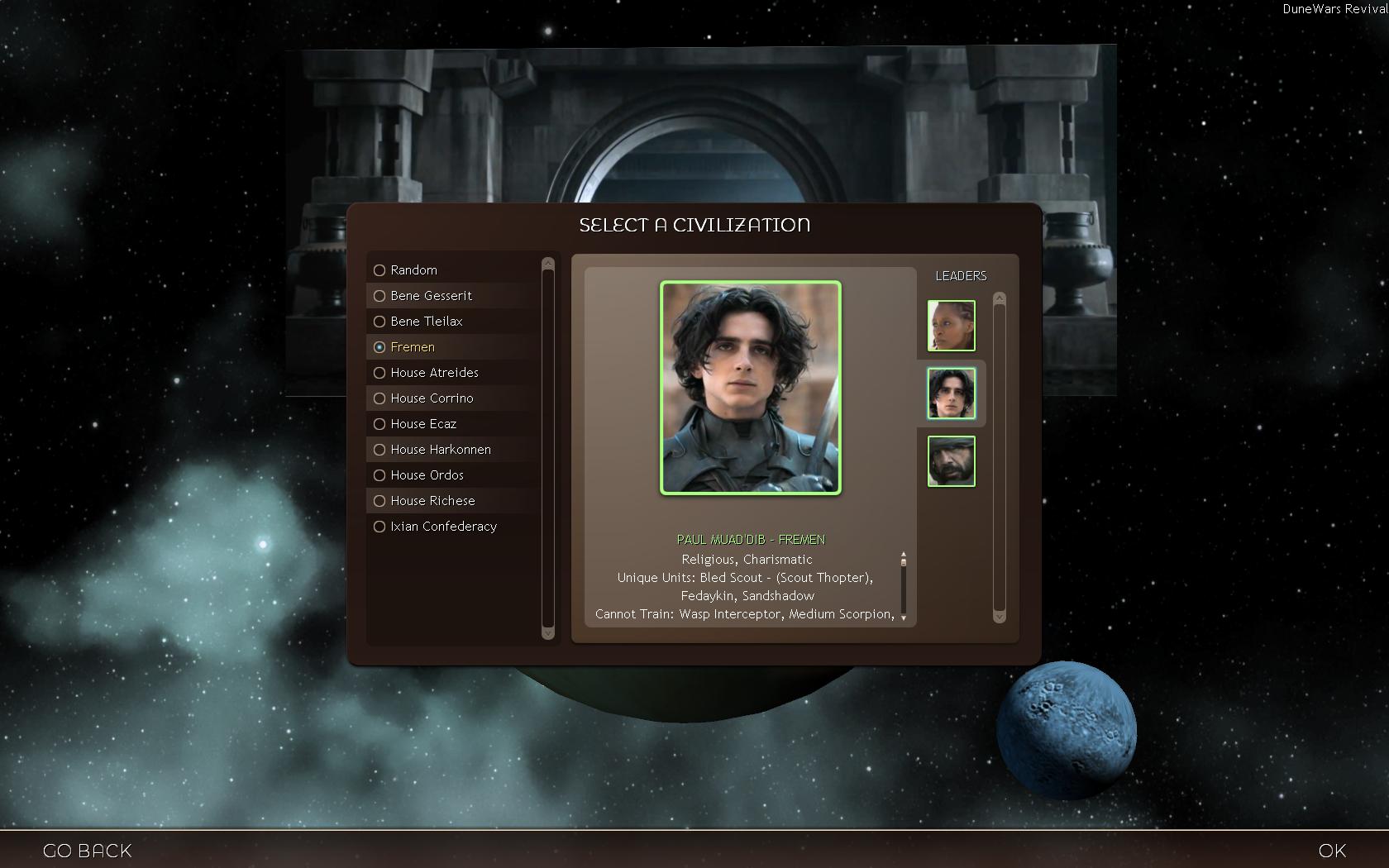 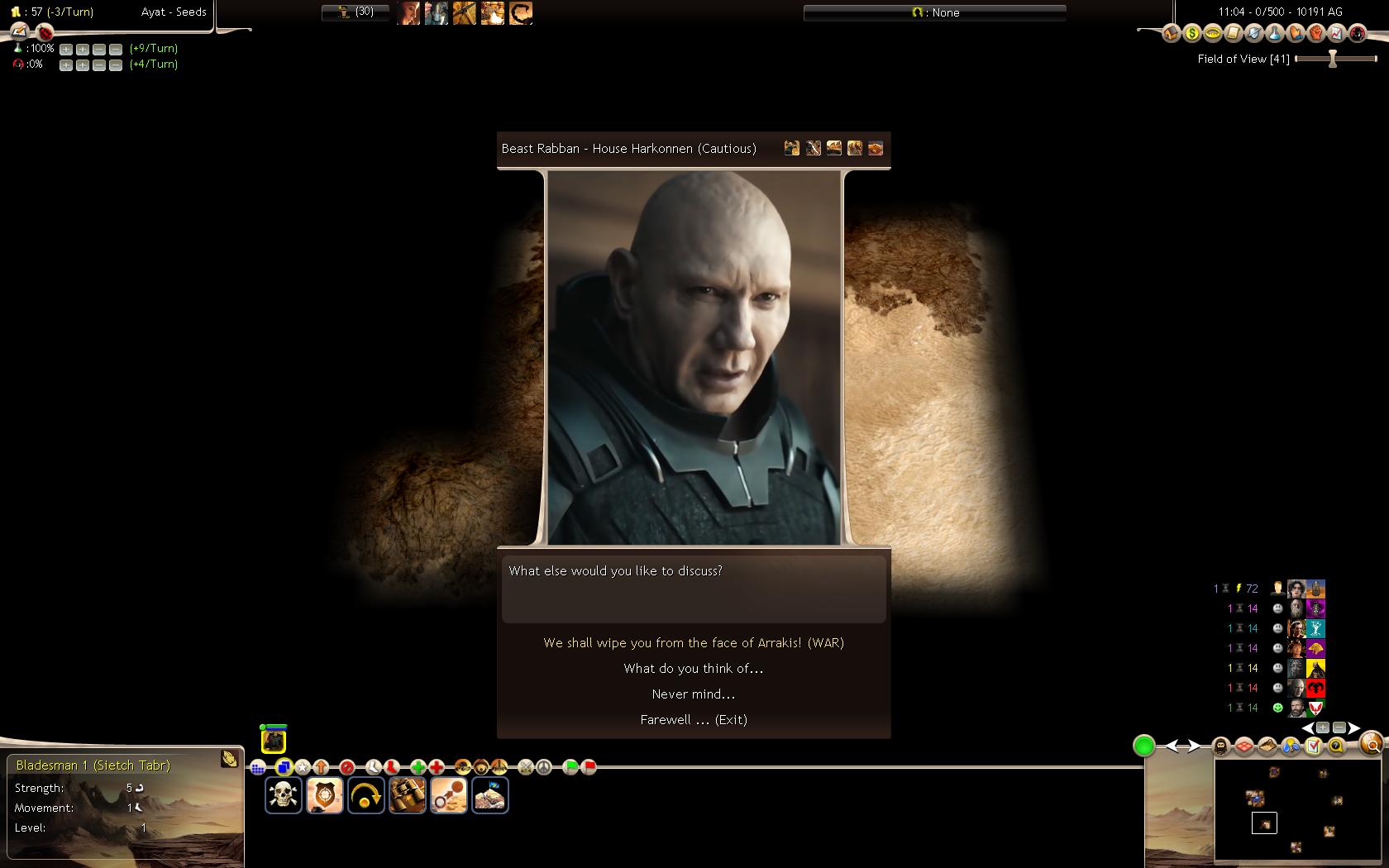 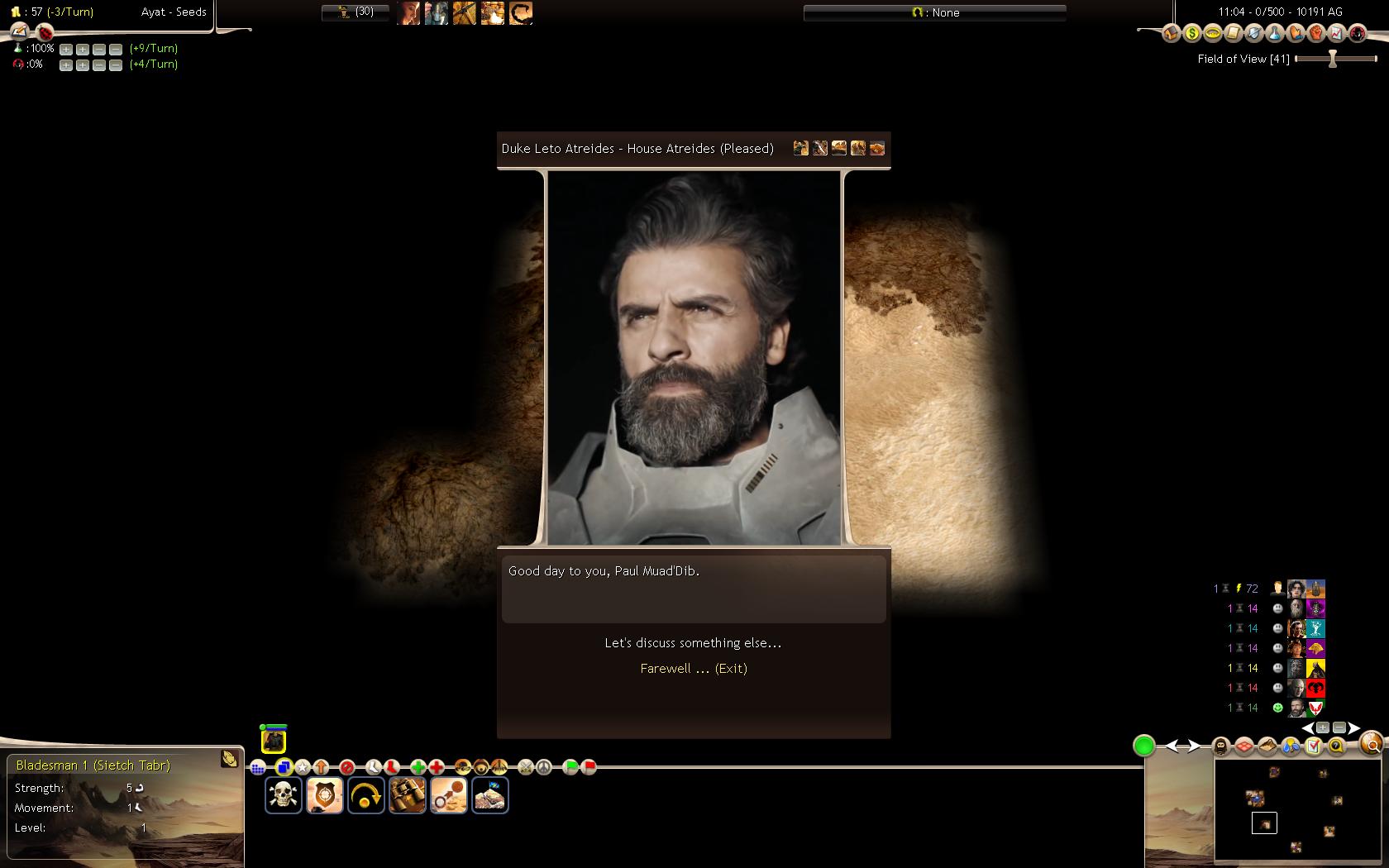 Artwork for the remaining 19 Leaders is currently unchanged. 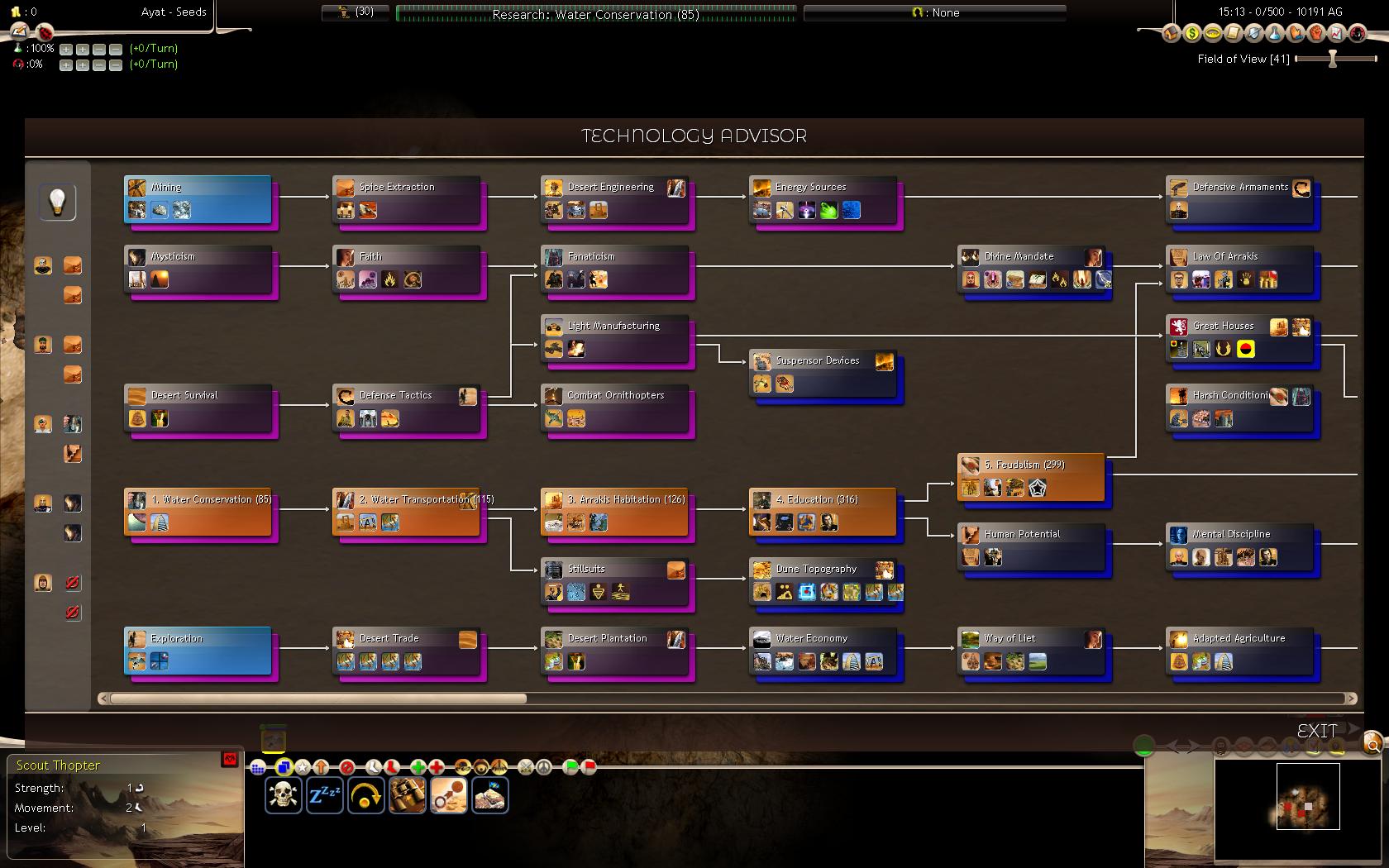 1. Install Dune Wars: Revival 1.10 via the installer or zip file.

4. If you want the new font to work in game you will to install the Font file MontserratAlternates-ExtraLight.otf from Dune Wars Revival/Resource/Fonts into your Windows Fonts.

Dune Wars: Revival is a new modmod of Dune Wars the total conversion mod for Civilization IV: Beyond the Sword. Duneman (Mr M from Civfanatics) has put...

Dune Wars to feature in Tom vs Bruce

It looks like Dune Wars is going be featured in the Kickstarter funded return of Tom vs Bruce.

A larger amount of mods for Civilization IV is now supported!

The latest version of Dune Wars, the mod based on the series of novels by Frank Herbert is here. This version has been in development and beta testing...

New version of the Dune Wars: Revival - Villeneuve Inspired Patch with a bug fix relating to the Fremen improvements.

Latest version of the Villeneuve Inspired Patch for Dune Wars:Revival that fixes a bug affecting the Fremen.

Latest version of the Villeneuve Inspired Patch for Dune Wars:Revival that fixes some significant bugs.

Latest version of the Villeneuve Inspired Patch for Dune Wars:Revival including some gameplay and scenario tweaks.

The Villeneuve Inspired Patch for Dune Wars: Revival has now evolved into modmodmod with a number of gameplay changes in addition to new artwork from...

To celebrate the release of Denis Villeneuve's Dune film, this patch adds content from the new movie to Dune Wars: Revival 1.10, including 3 new leaders...

I installed Dune Wars: Revival 1.10 earlier this week on Steam & also the Villeneuve's Inspired Patch. that i mentioned few days ago Nov 3rd 6020. I guess i placed Villeneuve Inspired Patch to right location. Met a problem when reading the install instructions at readme file: "3. If you want the new Font to work in game then install the "Font file MontserratAlternates-ExtraLight.otf from Dune Wars Revival/Resource/Fonts into your Windows Fonts" That is mentioned here: Forums.civfanatics.com Good that question was solved via reply on that page ^^. "Where is that "Windows Fonts" folder" :) Pst: Amazon Prime Sub is 110% worth it cause of many benefits & not to forget the budget friendly access to Amazon Prime's Streaming Library.

I've been Arrakis fan for 27 years. Got introduced into beautiful Dune / Arrakis Univ. via golden Amiga 600 27y ago. Then some years later Bought first Dune Book Trilogy around late -90's. On past couple years same again & new ones as ebooks via Amazon.co.uk <3 I sometimes pay even if some books would come without cost cause of being Amazon Prime Subber. I do it to give extra support for authors. Excited for upcoming 'Duke of Caladan' book & gotta buy to myself the Dune Graphic Novel as Winter Solstice holidays gift. Now to Question:

Why keep getting this even launched Civ IV & Civ IV Beyond the Sword to create registry for both :( So autom. installation not working ? Have to follow the steps that were written here in Moddb page's comments ? Found install instructions only that way (Currently written on page 4 if recall) & then created own rtf file where copy pasted them. Imgur.com 2nd question: Is this nice Patch from October 8th included to one available here in great Moddb. Forums.civfanatics.com ? If not then hope it be added here <3

UPDATE: Tried the manual installation that's written in readme file.
Ok Button is Greyed out after selected Mods folder under the BTS Folder. I even tried to create new one as Dune Wars, w no luck :( Imgur.com
2nd UPDATE: Got it installed weehee. Many BTS & Mods folders while browsing the list when installing Mod is confusing. Got it placed to right one. I Hope that don't need to go through advanced -> mods & so on each time when launch CIV IV: Beyond the Sword. Now to add that Villeneuve's Patch that i wrote about on 2nd Section ^^

Good November & rest of the year to Dune Wars: Revival Devs & Arrakis fans o/
Kindly: Fedaygin (Y not Fedaykin cause of not so brave as they are)

A magnificent work of idea and dedication. Last decade is very dense of Dune franchise - last game were released in 2001 and not much people even remember "Dune" books and movies. I bring big big biggest Thank You to creator of this mod as one of big fans. Thank You. This just a best and biggest adaptation of Duneverse ideas into game. Thank You. Best wishes, best regards. I just have no enough words to express how much i like this mod.

I'm having a problem loading saved games in Dune Wars v. 1.10. Does anyone know how to fix this?

I have CivIV BTS from Steam.
The downloader keeps saying it doesn't recognize the BtS.exe file.
Is there any help you can offer?

Your best bet is to manually install using the ZIP file version. Just unzip and copy to your mods folder: Moddb.com

edit: nvm i think its due to their being no fractional yields ?

Whats up with trade routes all producing exactly 1 gold regardless of bonuses? Am I really the only one who has noticed this, or am i misunderstanding how trade route bonuses work

A bit of a problem during single player Custom Game.

Every time I start the game after choosing a map to play in, the other factions starting plots are in the same square as me. At most I get 3 or 4 others in the same square. I tried reducing the number of factions and play in a large map, but the problem remains. The only map that this problem doesn't show up is Custom Continents with Number on Continents set a One Per Team. Am I doing something wrong when starting the game.

Aside from that problem, well done on creating this mod.

By the way where is the water tile in World Builder. I know there's no water in Dune, but there seem to be rivers of sorts in the maps...

I would highly recommend using only the Arrakis.py and DuneArchipelago.py mapscripts which are tailored to the mod. I only use Arrakis.py myself. If you use these two you shouldn't have any issues.

Don't have way to fix it huh?

Fix what exactly? I can't recreate the problem you describe using Arrakis.py. Do you have a problem using that map? There's not likely to be any further development on Dune Wars now.

It has... well... only the core gameplay is present. Everything else changed, in this mod, melee guys can kill armed gun units lol 10/10

Chronicles of Mankind Civilization IV: Beyond the Sword

Conflict on Chiron Civilization IV: Beyond the Sword