Duke Forces is a modification of Duke Nukem 3d inspired by the Star Wars Dark Forces series. It works with all Duke Nukem 3D levels and automatically converts weapons, enemies, textures, sprites, music...pretty much everything into Star Wars content. 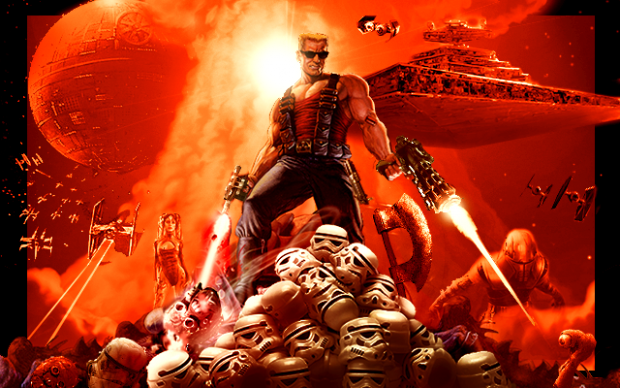 A long time ago, in a culture far, far away... games were games and Duke Nukem was a badass. Take Dark Forces, the 1995 Star Wars shooter, add Duke Nukem 3D, the 1996 classic shooter, enhance these two with awesome levels made by the community, force powers, light sabers, new art and sprite edits galore, plus some new gameplay mechanics, and you get Duke Forces. 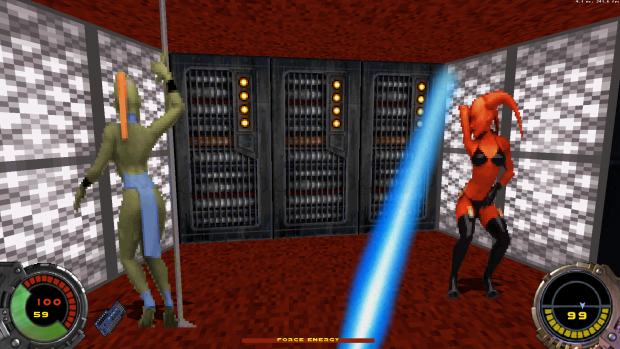 Duke Forces 2.10 features new sprites by the super-talented sebabdukeboss20, whose work exploded onto the Duke Nukem modding scene with Alien Armageddon. We now have SW themed sprite replacements for the strippers and other babes. 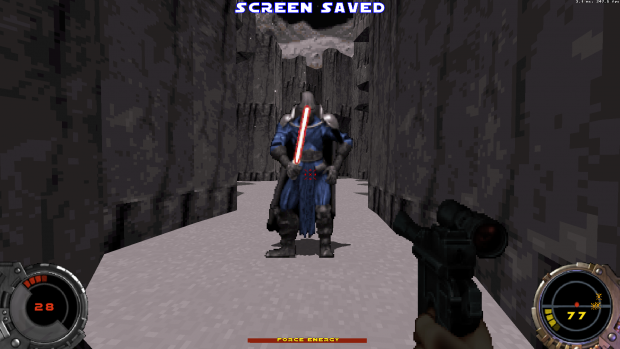 We also now have a much-improved Sith enemy with several distinct saber swing animations, making saber duels with the player more compelling. The original Dark Forces enemy sprites (for stormtroopers etc.) have also been upscaled using neural network tech to make them easier on the eyes. So whether it's for nostalgia or just solid gameplay, come check it out!

2.03b update released for Star Wars day. This includes an important fix for perks, and a new light saber feature. Also, check out this Let's Play video...

Nearly a year after the initial release, a major update to Duke Forces, the Star Wars themed total conversion for Duke Nukem 3D, is almost ready! In this...

Duke Forces, a total conversion of Duke Nukem 3D to Star Wars, was released today. If you own Duke Nukem 3D, give it a try. One player described it as...

Duke Forces is a Star Wars themed total conversion for Duke Nukem 3D, based mostly on the Dark Forces game. Version 2.10 is a cosmetic update with a few...

Patch 2.03b --May 4th, 2017-- Installation: Simply unpack the included GAME.CON file and us it to replace the one in your Duke Forces folder. This patch...

Duke Forces is a total conversion of Duke Nukem 3D which runs on the EDuke32 platform. Version 1.1 includes a new enemy, a new weapon, bug fixes and rebalancing...

Anyone know how to run City Terror mod on Windows 10?

I played through the complete mod version 2.10. Thank you for this cool mod! It was nice playing good old leveldesign with the Duke3D-, Dark Forces- and Jedi Knight-vibe! This is soo cool, because the Dark Forces/Jedi Knight series didn't see any sequel after 2003!

The mod is very good. I like the gameplay and the weapon sprites are great in this version. I finished the two episodes in 15 hours, thats a lot of playtime! More than modern shooters have.

I liked in episode 2, level 9 the peaceful/standard music. Also in level 10 the music was good.

If there will be ever a third episode, I hope that there will be new music tracks. In episode 2 most of the tracks were known from the previous episode. (what is not bad, but shouldnt be repeated in the third entry in a high amount, in my opinion)

(Note: Custom directory was set to none. Last time I had the mod, I pointed EDuke 32 to DukeForces as a custom directory. Can't replicate that.) For some reason, saves aren't working. It shows the save screen, but when you finish the process and open the load menu, it doesn't show up. Also, after using the quicksave key once, it freezes the game. I had downloaded the mod once before, and I never had this issue.

I wish I had time to look into this. Please try replacing the included .exe with a more recent one from this directory: Dukeworld.com

I did not make any changes in the update that would affect saving. If the problem persists, try looking for save files to see if you are saving them some place strange.

It was because I forgot to run the EDuke 32 exe as admin.

This mod is amazing, although I did run into a couple of glitches with the Sith enemies spawning in unreachable places on occasion. No big deal, I absolutely enjoyed both episodes throughout. Gameplay is decently balanced, although challenging (Bring 'Em On difficulty here) and I had an absolute blast using the mortar launcher, no pun intended. I cannot recommend this mod enough and told my friends about it.

I would certainly like to see at least one more episode (to make it a trilogy), but I would welcome as many as you are willing to make. To be eventually able to battle Darth Vader, and maybe even the Emperor himself, would certainly make this mod complete in my opinion.

The Force is STRONG with you!

Duke i soo dangerous that both the empire and the rebels are working alongside to bring him down!