Divide and Conquer is the biggest Third Age: Total War submod. The latest release was V4.6 on April 18th, 2021. DaC V4.6 features all the features of V4.5 plus a collection of fixes. We hope you all enjoy DaC! 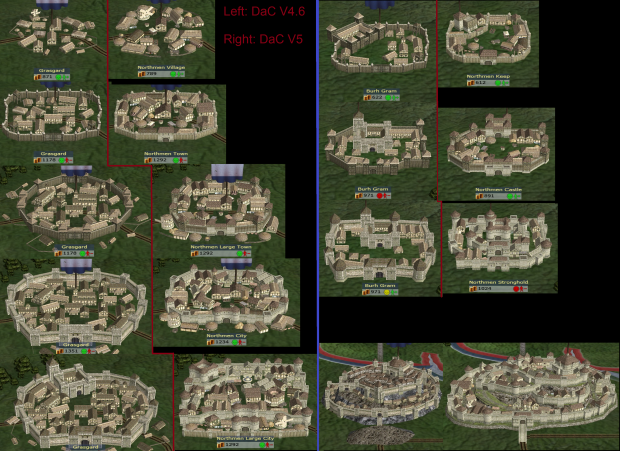 i approve of it

I'd love to learn how to do battle maps, especially for unique places. Primarily because I'd like to "fix" some glitches with Dol Guldur

Hehe imagine playing anything other than Dunedain factions.

Maybe it seems to me, but the textures on older models look better.

I can assure you that the textures on the old are slightly worse compared to the new models.

One thing that's different is that on the new models, you can see the textures on the buildings easier compared to the old. For example, you can see the doors and windows as they're larger whereas before, they used to be tiny.

That said, some textures are slightly different (like the palisade wooden wall) but they're generally the same.

Perhaps I thought so, because the walls on the old textures look more colorful. In general, don't take deeply my stupid opinion :D

Hello Elite Dwarf, I love this sub mod, it is the best in my humble opinion, but I would like to touch up a few things for personal use.

I would like to ask you a question and hopefully you can help me.

I would like to put units of a mod and add them to it.

Is it possible and in that case how can I do it?

Thank you for the kind words!

Yes, you are able to take units from other mods and put them in DaC (for your personal use).

Here's a video with instructions:

New Northmen (Dale, Dorwinion, and Rohan) generic CSMs (campaign strategy models). The settlement in the bottom-right is the unique City of Dale.

At this time, the generic models are being used by the three Northmen factions. However, I plan to create unique models for Dorwinion and Rohan in the future so that each Northmen faction stands out from one another.

Both the previous and new models were created by me.