Today I am very pleased to introduce one of my official products called ¨Demonica¨, an audacious body and race mod for Skyrim.

This mod is exclusively addressed to users who value quality above all else, especially concerning their character’s aesthetic and realism. In other words, for lovers of beauty.

For that reason, compromises in terms of performance, compatibility or any other sort of limitations, have been abandoned. Thus, to run this mod you must have a good computer with a sufficient power supply.

If you like this mod, you may consider supporting me on ¨Patreon¨, where you will get exclusive objects to customize your character :

For your sole pleasure, Demonica has an extensive collection of gear and textures you may gather to adorn your character with its most beautiful assets. 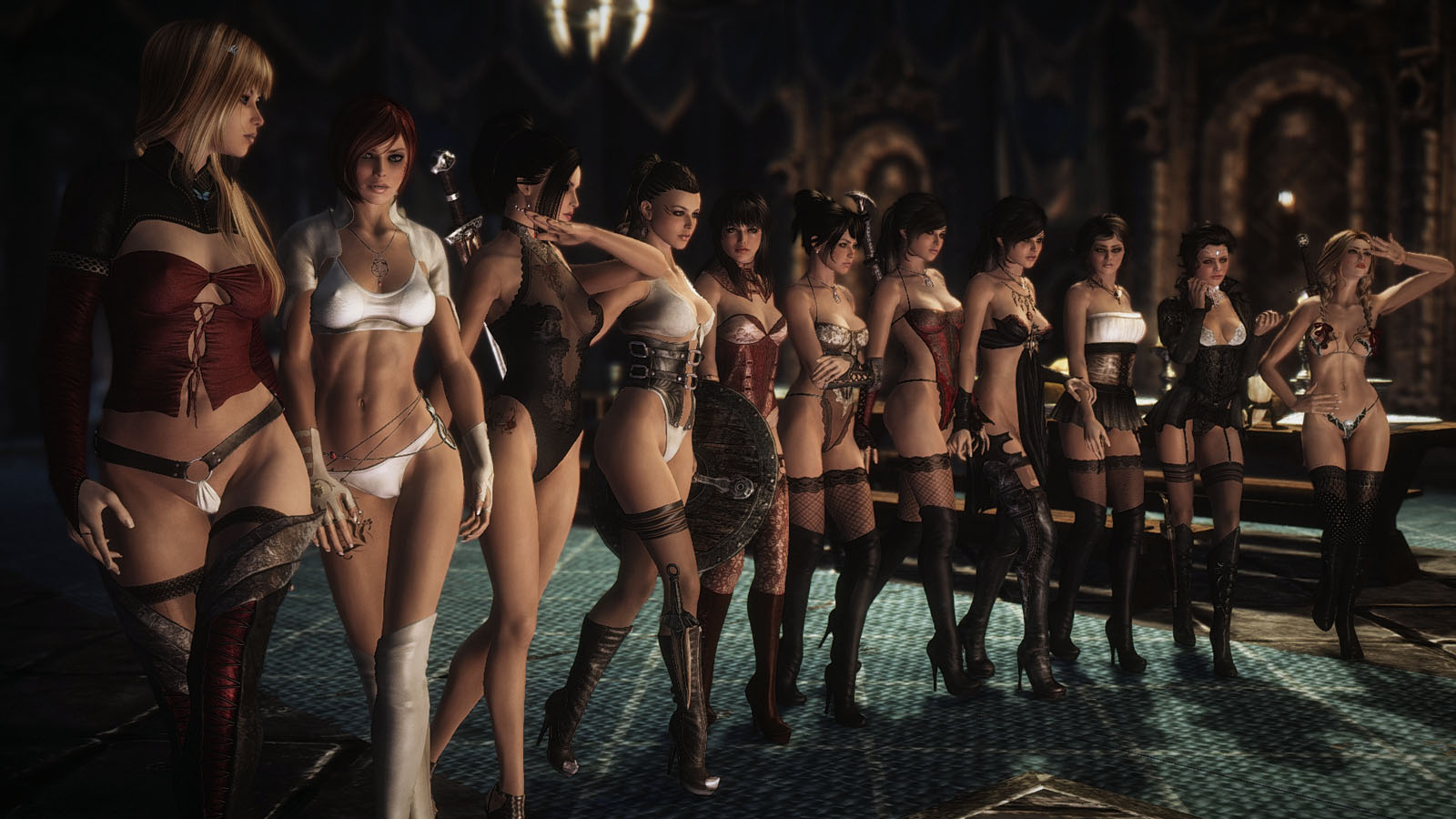 - This mod adds a new race to the game called ¨Demonica¨. It contains new models and textures, including a new head and two new bodies.
- The modification is entirely autonomous a 100% and doesn’t require any add-on to work correctly, everything has already been integrated.
- The player will use Lilith’s body in human form, and Eva’s when becoming a vampire.
- Lilith has an athletic build, her body is idealized with larger breasts and smaller hips.
- Eva has entirely new nails in the fashion of the famous french manicure, she is more feminine and realistic.
- Armors or objects that are not fit for DEM will be invisible. The main mod already includes a set of armors for both type of bodies, and an extensive wardrobe that can be acquired on my website, or by becoming my Patreon to receive exclusive gifts such as armors, textures, hairs, and so on.
- The mod also contains two DEM ¨Lilith¨ followers that will replace Serana and Lydia.

- New meshes and textures. These were improved to 2 x 4096x4096 =8192x8192.
- New sets of eyelashes, eyes, teeth for both humans and vampires, make-up, hairstyles, clothes, animations, morphs, skeletons ; created with care and specifically for Demonica race.
- New Vampire Lord form, the amazing [LB] ¨Mistress of Night¨, based on Kerrigan’s player model.
- A new high heel system has been implemented, preventing both the legs to get shortened and the body to be distorted.
- By default, the sword is placed behind the back and the dagger on the right leg.
- SLE version includes Lady Head 2.0, and Lady body ¨Eva¨ v2.1.0 & ¨Lilith¨ v1.6.1. The SSE version has the same features with the exception that it uses Lilith’s v1.6.5 body instead.
- The joints were displaced to the bone deformities. The new junction of the body and head allowed to solve the eternal joint and neck seam issues.
- Development has been highly improved (supported by Vika 6 because it was precisely his topology that was used during creation).
- Information from Tangent Normal, Ambient Occlusion and Displacement Maps, has been transferred to OS (Object Space).
- The project is complete and works perfectly so there will be no further changes or fixes. Thus, any future updates will refer to additional contents.

Location of starting clothes :
Lilith’s starting clothes’s location can be found inside the starting cave near a Bear, and also at the ¨Windy Peak¨. Eva’s can be bought from merchants in the castle of Volkihar. Alternatively, you may want to use ¨Additem Menu¨ mod. 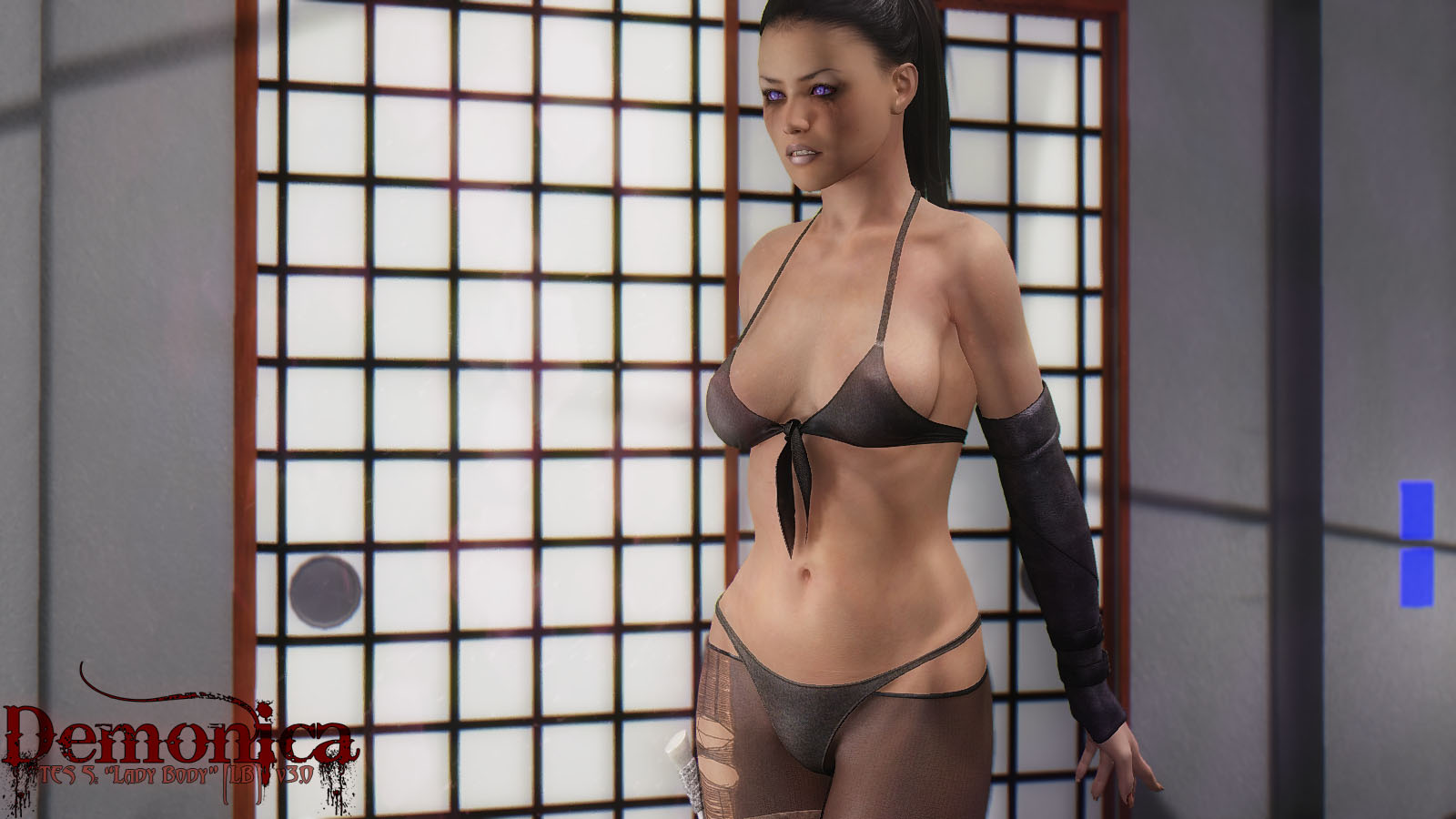 Incompatibilities :
Since everything has already been implemented, the mod may not be compatible with third-party mods that change the system of vampirism and lycanthropy. However, no issues where found until now, neither with Better Vampires or Vampiric Thirst for instance.
Not compatible with alternative appearance settings.

Permissions :
Without my permission, it is strictly forbidden to modify, use or upload somewhere, any assets included in this mod or created by my brand ¨KrisTa¨. 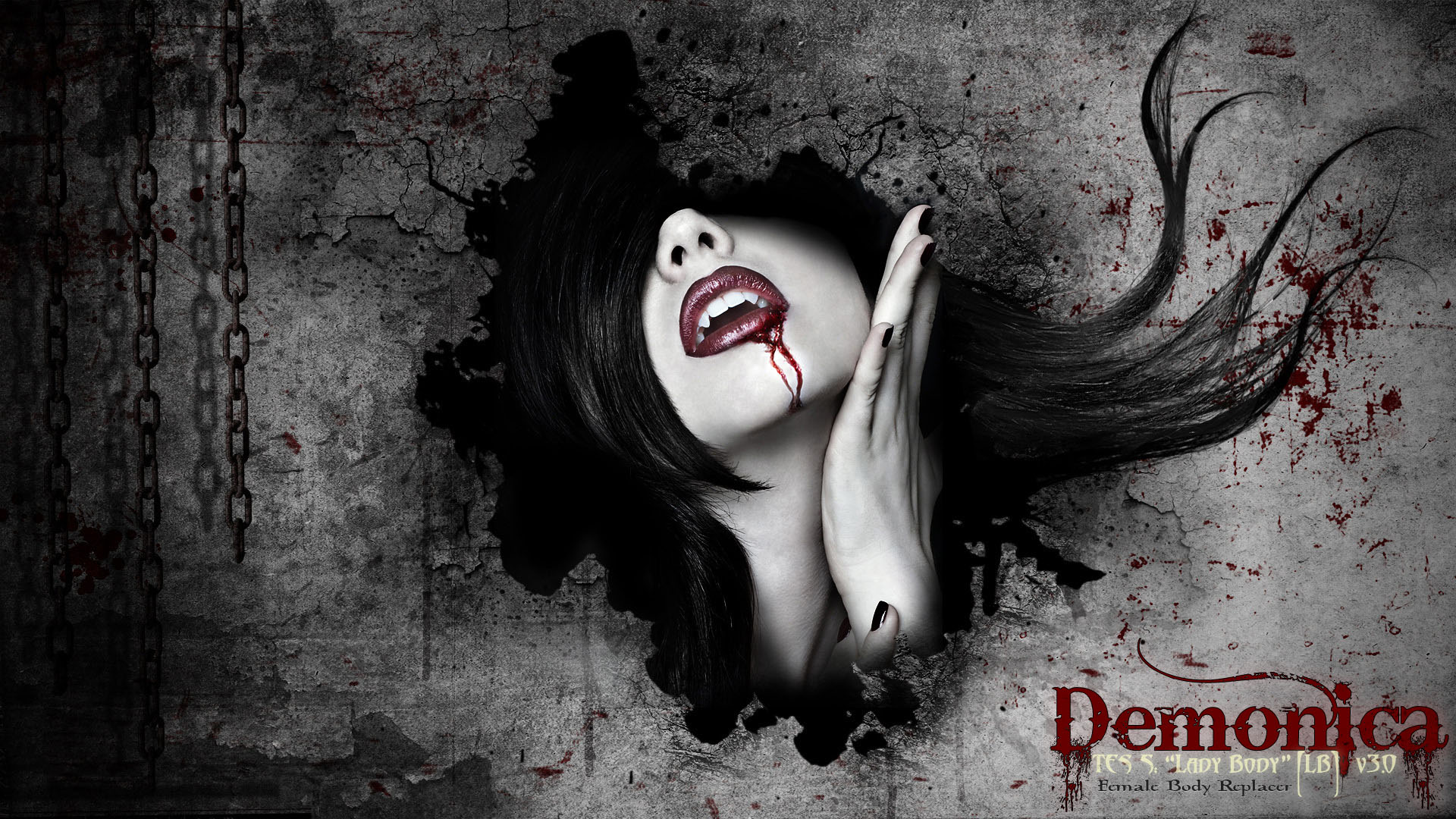 Credits :
I would like to give a special tribute to the community who supported this project over the years. Players may also download some interesting additional contents on their community networks. You can find links to their websites on my official pages :

Finally, I wish to thank your irreplaceable support, because otherwise nothing would have ever been possible.

To promote Demonica Mods and grow its popularity (top mods), use the embed code provided on your homepage, blog, forums and elsewhere you desire. Or try our widget.

I can't customize my characters face and body textures. No scars, no makeup, no face or body tattoos.

Hello!
The main mod contains a sample of 10 different face textures with alt. Make-up or tattoos that can be found inside the file called "Options".You will also find alt. skin textures inside the file called "Optimized".
The description gives in detail all relevant information concerning what to expect from the main mod. As stated, any additional content to customize your character can be acquired on my official websites or on community networks.
Take care!

A overhaul mod for Solitude, complete with farms, lore books, and new textures.

This mod adds the old beloved armor of the Mythic Dawn into Skyrim.

Carved Brink - is a large quest modification, in size, comparable to a medium sized DLC.

elsa in skyrim mod come back again. recruit spot: the serpent stone(north east of the map) Anouncement: anybody can translate or reprint to any other...

hi guy ! i work on a mod Lord of the Rings for Skyrim. It's a total reconversion so with map, png, faction, city and quete. It's a big job ans i need...

A recently abandoned temple with a complex dwemer machine lies in the Nibenay Basin and it's ready to be claimed.