DC Global Front is a mini-mod for the legendary Desert Combat mod for Battlefield 1942. It adds new armies (faction), vehicles, hand weapons and maps to the DC core build. Some of the DC/vanilla 42 maps have been renamed and reworked to better suit the GF environment. Global Front features a series of maps that depict individual scenarios that may or may not be connected to the other maps. There is no overall story line to connect everything together. GF is intended to be played in coop game mode (due to limited players with such an old game) but Conquest and Objective are fully supported. This is the first public release of Global Front and it is, unfortunately, still in a Beta form. There are many WIP/unfinished elements that our small team wishes to finish. We intend to continue and improve Global Front; adding to the build so long as players want new content and the team is enthusiastic to continue our “hobby”. 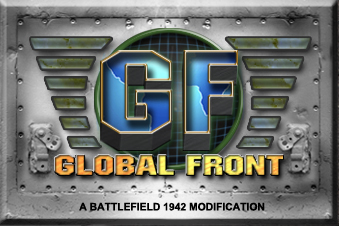 The DC Global Front mod's 0.2D beta release is presented as a zip file for installation on both Windows and Mac OS. This is a full install, so delete any existing DCGF folder.

Part 1 includes the core build files and one map: Motor Pool. Part 2 includes the map files.
The DCGF 0.2D release is dedicated to our late friend and mod team member Jake Buitenwerf (sgtjake) who died tragically, one year ago on this date.

A new map for the 0.2D release is DCGF Narco Hunt, a Global Front modification of DC Basrah Nights. This map was inspired by the current Narco War raging...

The DC Global Front mod presents some new features for the 0.2D release.

The upcoming 0.2C release of Global Front will feature new maps. DCGF MOUT is a modified version of DC Gauntlet, which makes a return from the pre-release...

The DC Global Front mod's 0.2D beta release is presented as a zip file for installation on both Windows and Mac OS. Part 1 includes the core build files...

The DC Global Front mod's 0.2D beta release is presented as a zip file for installation on both Windows and Mac OS. Part 1 includes the core build files...

Damn this is about Iran vs USA.

The prophecy is true! :V

Hi Atlasfield, that was a great time, as we tested all the stuff the team created for DC Global Front. Since a couple of years there is a new start on that way. The SuperDC v2.4 Mod, developing by „bbfplayer“. There you find specially BF2 mechanics inside, German Bundeswehr, Russian Troops, IS, Afghanistan and taliban for example. Would be great he could get the stuff, after asking the ex leader „Marshall Nord“ for the Mexican, Venezuela, Canadian (Not finished) and Iran content? You can get in contact with the one men developer from Russia: Battlefieldsingleplayer.com He doing good a great job, the COOP mode working very good. As basic mod you need also Desert Combat 0.7 before SuperDC v2.4 working. You would love this modern warfare mod. Lot of maps, veheicles, weapons and 10 fractions to play inside.:-) Happy new year 2020. 10 years ago we dream for this.:-)

thx for this fix its really really work

There is a solution against the gamespy shutdown. You can play all the mods online and the server will be back.
You need at first the basic game BF 1942 –> 1.61 Patch (only if you have the release 2002 edition) –> Online Patch 161b (Anthology) –> Origin Players: Team-simple.org or for CD Players Team-simple.org (thats for find back the server in your Gamespy Browser, fix your widescreen, and give compatibility to Win 7/8 Users) –> go in the bf1942 folder and overwrite the old bf1942.exe with the new one –> right click on the Desktop BF 1942.exe –> Properties –> compatibility –> set start as Win 1998 (v) and as Admin (v) –> click ok thats it you are back again online!

when its loading map just crashes to desktop, i have FH O.7, Battlefield 1918 and Desert Combat installed and they work fine. (and if i run with win 98 compatibility, the widescreen mod doesnt work)

For all people, if the mod still crashing, download this file, this should fix the problem:

some of the textures a a bit crappy, but i love it. but i cant play V0.2D versions because it crashes every time i load any DCGF level. but if i play V0.2A its works, can anyone help?

and yes i play with bots, but playing online is impossible now.