Curse Episodes is a Half-Life 2 single player total conversion : a mix of physics based combat, puzzles and exploration. In the first episode you can explore an egyptian necropolis and kill mummies, monsters with a morning star.

ModDB talks to Gabor Dosa, the man behind the Curse mod for Half-Life 2.

There's a ton of new mods appearing on ModDB every month and as an admin I see the usual fare (zombies/military/star-whatever) pretty often. So when Curse came along, I immediately recognized it as something different. It's not everyday you come across Egyptian-themed mods with giant Wormdemons. The concepts are simple and have been done before, but employ enough of a twist to grab your attention and make players anticipate its release. It doesn't hold any over-the-top grandiose ambitions or massive feature list promising to re-invent or blend certain genres. What it does do is present a few novel ideas within a unique setting and show them off with polished media releases. It's more than enough to entice the average gamer, especially considering that the bulk of the mod has been produced by one person. Gabor Dosa, the man responsible for the majority of the content within Curse, was kind enough to answer a few questions about his project for ModDB.

ModDB: Thanks for taking the time out to talk to us today about your mod, Curse for Half-Life 2. Why don't you introduce yourself to ModDB?

Gabor Dosa: My name is Gabor Dosa and I have been working on Curse since 2006.

ModDB: What is your previous experience in modding?

Gabor Dosa: I started building deathmatch levels for quake around 12 years ago, then later I began creating a single player Quake 2 total conversion with my friends but we never finished it. On my part it was because I was hired by a game development company to work as a level designer. While working in the gaming industry, I've not stopped building game levels and have been developing game ideas in my free time.
Since 2006 I've gotten more control over my time since I've become a freelancer, so I selected some gameplay ideas from my scratch book and started build the mod that is now Curse.

ModDB: How many people are involved with Curse?

Gabor Dosa: Everything was created by me, except for the weapon programming which was done by József Mihalicza. 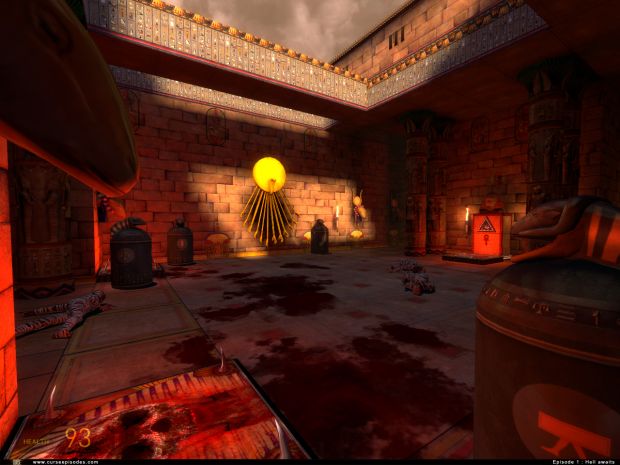 ModDB: So what exactly is Curse about? All we know is that it takes place in an Egyptian-like setting. Who is the main character and why is he there?

Gabor Dosa: You're a guy who suddenly finds himself in Egypt, then all hell breaks loose! All the other parts of the story are secret currently.

ModDB: What was the original motivation behind the Egyptian motif?

Gabor Dosa: I wanted a style that can be represented with a relatively low detail geometry, because I wanted to make sure it will run at an acceptable speed on slow machines too. Plus, I wanted an art style with easily reusable elements so I do not have to spend too much time on creating many unique textures and models (for example, the statues also used on the wall textures too). With these constraints, the Egyptian style seemed a perfect choice.

ModDB: So far, Curse seems to be a good mix of combat and puzzle-solving. Is there anything extra players can expect to see? How do you think you've been successful in incorporating unique elements into the gameplay?

Gabor Dosa: The extra thing is the melee combat. The game's only weapon, a morning star mace, movement is controlled directly with the mouse. There's absolutely no pre-recorded animation in it.
I can imagine a much more advanced presentation of the same idea with a procedural character animation system and with more advanced physics, but I wanted a rather simple and easy to play implementation. 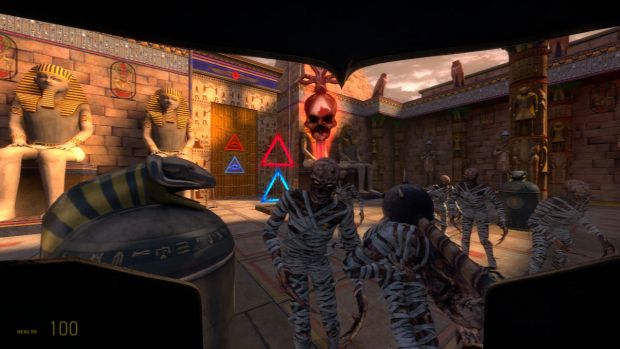 ModDB: Can you explain more about the difficulty settings within the mod? I notice in past updates you mention that players have to "activate" nightmare mode to unlock all areas of a level. Are you referring to hidden switches or just multiple play-throughs of levels?

Gabor Dosa: I removed the difficulty setting from the game menu and incorporated it into the levels.
For example, the first level is like a sightseeing tour—almost nothing is forced on the player and that is the 'easy setting'. If you want some action you can summon monsters; we can call this 'normal setting'. If you still want more there is the nightmare mode, which can be activated at the end of the level with hidden switches and by killing all the enemies you summoned previously. The level will change a bit, new areas become accessible and the level's 'atmosphere ' changes also (as in the Meet the Wormdemon video). The nightmare mode adds a kind of replayability with more challenge—so the answer to the second question is: both. Also, players will get a slightly different ending if they unlock nightmare mode in all the levels.

ModDB: What about the Wormdemon? Is he the main antagonist of the story?

Gabor Dosa: Initially the Wormdemon was designed to be a general badguy, appearing only in nightmare mode. But the moment I exported it into the game and walked around it in a dark room, I realized that the Wormdemon is more of a boss type, so it will be something like that.

ModDB: How much content can we expect to see for the first release? How many episodes do you have planned?

Gabor Dosa: There will be 3 levels in the first episode and the playing time will depend on your style of play.

Curse is being released in an episodic format with the first episode planned for release in March 2009. View more exclusive media in Curse's image gallery.

yea really nice. But you don't tell us if you need help. Myself i would be pleased helping you with sound fx.

THE mod to watch for!

This looks amazing! Good job! The only thing I think i could nitpic over is the mummy animations and sounds. After almost 5 years the stock hl2 zombies are really getting trite. It'd be nice to see the mummies have a feel of their own. The models are beautiful, though. again, great looking mod!

I like the sound of a release date, and even better one 1-2 months away! keep up the good work!

And I of course voted to Curse... Astonishing work so far, keep it up!

All I can say is, incredible. I strongly regret forgetting to vote for this game.

So I can't help but notice in the interview you said that the morning star is the only weapon? Does that mean that the spell-looking attacks shown in the screen shots will not be present?

That is a remodeled gravity gun

With the Hand, (which is currently just the remodeled gravity gun)you can't hurt enemies directly, so it's basically not a weapon - although it can be used as one.

The setting and art are spot on! The combat sounds interesting too. Really am looking forward to this!

Wow, beautiful maps lot of eye candy, really nice color scheme and skybox animations.
I say the only field where Curse lacks perfection are animations. Everything else is spot on and has a veeeery professional look to it. One man mods usually lack in some part of the design, but this one has it all.
I guess 3-4 years is realistic for a mod after all. No one makes the good ones in less. Congratulations, Gabor!

Reminds me of Powerslave/Exhumed ;)
Keep up the good work!