Counter-Strike is a modification (MOD) to the excellent game, Half-Life. It modifies the multiplayer aspects of Half-Life to bring to it a more team-oriented gameplay. Counter-Strike provides the player with an experience that a trained counter-terrorist unit or terrorist unit experiences. The MOD is team-based featuring one team playing the role of the terrorist and the other team playing the role of the counter-terrorist. Each side has access to different guns and equipment, as well as different abilities. Maps have different goals such as: hostage rescue, assassination, bomb defusion, Terrorist escape, etc. Weapons include the usual assortment of pistols, shotguns, assault rifles, sniper rifles, grenades, demolition devices. Each side has access to a different subset of weapons so for example only the counter-terrorist can use the M4A1, and only the terrorists can use the AK-47. We are confident that we've created a MOD quite unlike any other.

Play the original Counter-Strike v1.0 before Valve stepped in and took over.

This is the installer of CS1.0 for Steam ! [FINAL]

The installer automatically finds your directory to install to, so all YOU have to do is keep pressing "Next".

After the installation is finished, double click "Counter-Strike 1.0" in your
third party games list in "Play Games"

Cleaned up some of the install files, some just null files (5mb less now)
Fixed so when you click "Training", there is no difficulty settings which means no confusion.
Final version;should be no more updates (hopefully)

Updated config to work with right hands, fixed some other config bugs 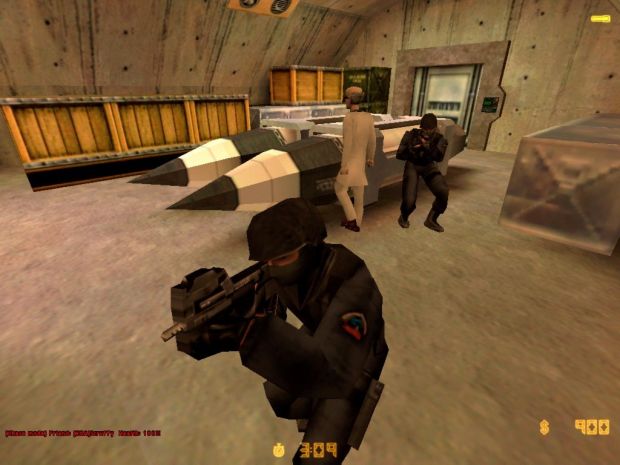 do you need half-life 1

wow ! good thing im indestructible because i had half life

(Fixed so when you click "Training", there is no difficulty settings which means no confusion. ) Finally a Training!!! for newbs!

Please help me, i have Half-Life on my steam account, i installed it and how to i launch it? Whats it mean by third party games list?

Third party is something unofficial, and the most common way I launch it is with CMD (or batch) files, simple like eating cake.

OK then. But it should stay for future references :)

i need help badly i downloaded the game (cs 1.0) but dont know what to do from there.. if anyone could help me an fast....i need step by step i have half life i just dont know how to add the game to steam

Run Half Life once to make sure that the appropriate files have been loaded for CS 1.0.

Download the installer, run it, and it will automatically detect your directory where you have Half Life installed to (in Steam).

After it has finished installing, close and restart Steam, and under 'Third Party Games' in your steam games list, you should then see a mod called "Counter-Strike 1.0". That is it.

It doesn't automatically detect the directory, so where do I put it?

Well, since you have Steam, it could be C:/Program Files/Steam/steamapps/common/Half-Life, at least i think so.

where can I get the installer??

hey my computer is also showing the problem of error 5899 metadata fil is missing or damaged. Plzzz tell me how to solve this problem

i just dont now where put the half life folder because it dont show
in steam list when i install it. and when i restart steam it still dont show in list. help i wanna play this so mutch!! :)

is there a way to add any mods to this like war3 or dm?

Hey! How can I make a server after the latest Steam update? the update that changed all the HL1 games from protocol 47 to 48?

I made the hlds work for cs 1.6 by creating a text file called steam_appid.txt and typing 10 inside it.

What is the appid for cs 1.0? Thanks in advance.

Never mind I got it.. for whoever wants to create a server they need to create a file inside the cs10 folder that's called steam_appid.txt and inside the text file just type in 70.

What is Half life and how do i get it

the best game ever made and you get it on steam

Help me plz. Where i have to install it? the directory stays empty =(

I got Half-Life with Blue Shift and Opposing Forces.

is this downloade legal and has it a virus?

No HL:S does NOT work with this. You need the original Half Life 1998 steam version in order to play this mod.

You Should, Keep the old CS still alive.