Video packs have been added to the downloads and addons sections, and the game / patch downloads themselves have gotten minor updates, too.

I promised this ages ago, but today, they're finally here: the Command & Conquer video packs to go with the full game download! As usual, I'm not ignoring the German and French C&C players in this, and have uploaded basic video packs for all three main languages. Obviously, you can also add these to a normal CD-based game install to make it fully no-CD, though with the rapid disappearance of 32-bit Windows OSes, and the fact the CD installer is 16-bit, I suspect there aren't too many of those left.

This whole thing was a lot less simple than it seemed; the German version of The First Decade / The Ultimate Collection gave me quite some trouble with all this, since it dumps all its videos in the main game folder, which royally messes up any adding of videos you might want to do, since bare video files in the game folder override anything else you add.

"But, Nyerguds," you ask, "why would you need to add more videos, if you already have them?" Well, just for fun, of course. Which brings me to the second part of this exposition: video addon packs!

If you go to the "addons" section of the Project 1.06 ModDB page, you will see that the translation packs have been moved there from the Download section. And you'll undoubtedly also notice something else that has been added there: the aforementioned video addon packs!

As you probably know, C&C95 v1.06c r3 comes with English, German, French and Japanese languages built into the game, and the current language packs allow you to add British-English, Spanish, Polish and Brazilian-Portuguese to that. And, an Italian pack is coming very soon, too! But while the configuration tool makes it really easy to switch between game languages, the basic video packs still contain videos in only one language, and if you install a different video pack, it'll simply replace the videos by the other language.

This all changes with video addon packs. By abusing a small loophole in the No-CD system of the game, I have developed a way to add videos for all languages! Mind you, the option has been in the 1.06c r3 patch all along; it's the little "Folder to use as CD: Subfolder of the game folder named like the language code" option in CCConfig. This allows the game to always select videos specifically added for the chosen language.

So if you, for example, download the English videos base pack, you could add the German, French and Japanese videos as addon-packs, which means that switching the language in the configuration tool also automatically makes the game use the videos for that language!

And now, in terms of translation packs, there's another nifty thing. About two years ago, a guy named "wolfstain" had the idea to subtitle the C&C briefing videos in Spanish! This is a rather messy process that includes converting the original videos to frames, adding the subtitles on these frames, and then converting them back (which is not as easy as it sounds). Here you see the neat end product of that: 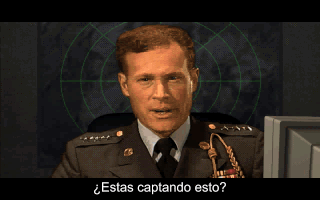 It seems the Italian translators I'm working with are also interested in taking this route, so, more such subtitle-video-packs could be coming in the near future.

I technically also possess a Russian fan-dub of the briefing videos (and a Russian language pack), but since Siberian_GRemlin seems pretty possessive of his stuff, I won't upload that here unless he gives me permission. I'd prefer keeping this stuff centralized, but, ah well. If you're interested in getting that, I suggest you, eh, google his name or something.

On to the second point. Or is that the third point? Whatever! I've updated the installers of both the full game pack and the patch to include some sorely-needed peripheral updates. These include:

So, that's it for now! I know, I should really get back into dumpster-diving into Westwood code, to release a new patch with shiny new features, but we'll burn that bridge when we get there, right?

Are there also pure ZIP version of these cool video packs?

Sadly, this wasn't possible, because the installation is more than adding the videos; it also needs to enable that "use language name folder as CD" option (even for the normal video packs, yes), and remove any loose VQA files from the game folder.

That was kind of the dilemma that made me take 2 years before releasing this.

Also, if I add 'em as .zip files now, they'll show up above the installer ones in the downloads lists, and people will inevitably download them and then wonder why it doesn't work correctly. Especially on the addon packs.