After several months of discussion and work in new tweaks for the mod, we have a more or less stable build to share with you! Of course, there are still parts that need more fine tunning and it might change a bit for the Steam release, but the base shall remain like we present it in the next paragraphs. We still plan to release Eastern Front before 2017, that hasn't changed, so the next weeks will be very important for us.

First of all, we think is necessary to explain further about our past stance about not having enough material to share in the form of an announcement, and that's because we were in the middle of a huge discussion about the feedback we got from our factions, what makes Soviets good to play, which problems they have due to how we assemble their tech tree, are the command trees fun and balanced? And we question the same thing about Ostheer. Our development cycle is quite long unlike other mods because we are always trying to improve a lot of the game mechanics which makes us appear like we take an eternity to release new stuff.

Also, right now Burton, from the ZombieMod project for Company of Heroes is lending us a hand with the animations of some of the models we need for the Steam version. You will see more of that in the future.

Now about the changes done to EF factions, due to time constraints we have limited information to present right now, but we have scheduled to share at least five updates very shortly:

We have prepared some simple illustrations to depict how the tech tree looks at the moment and what skills have each unit as well.

The HQ can produce two units: Ingenery squads and the ZiS-44 medic truck. Both haven't changed too much and keep their same abilities and upgrades. 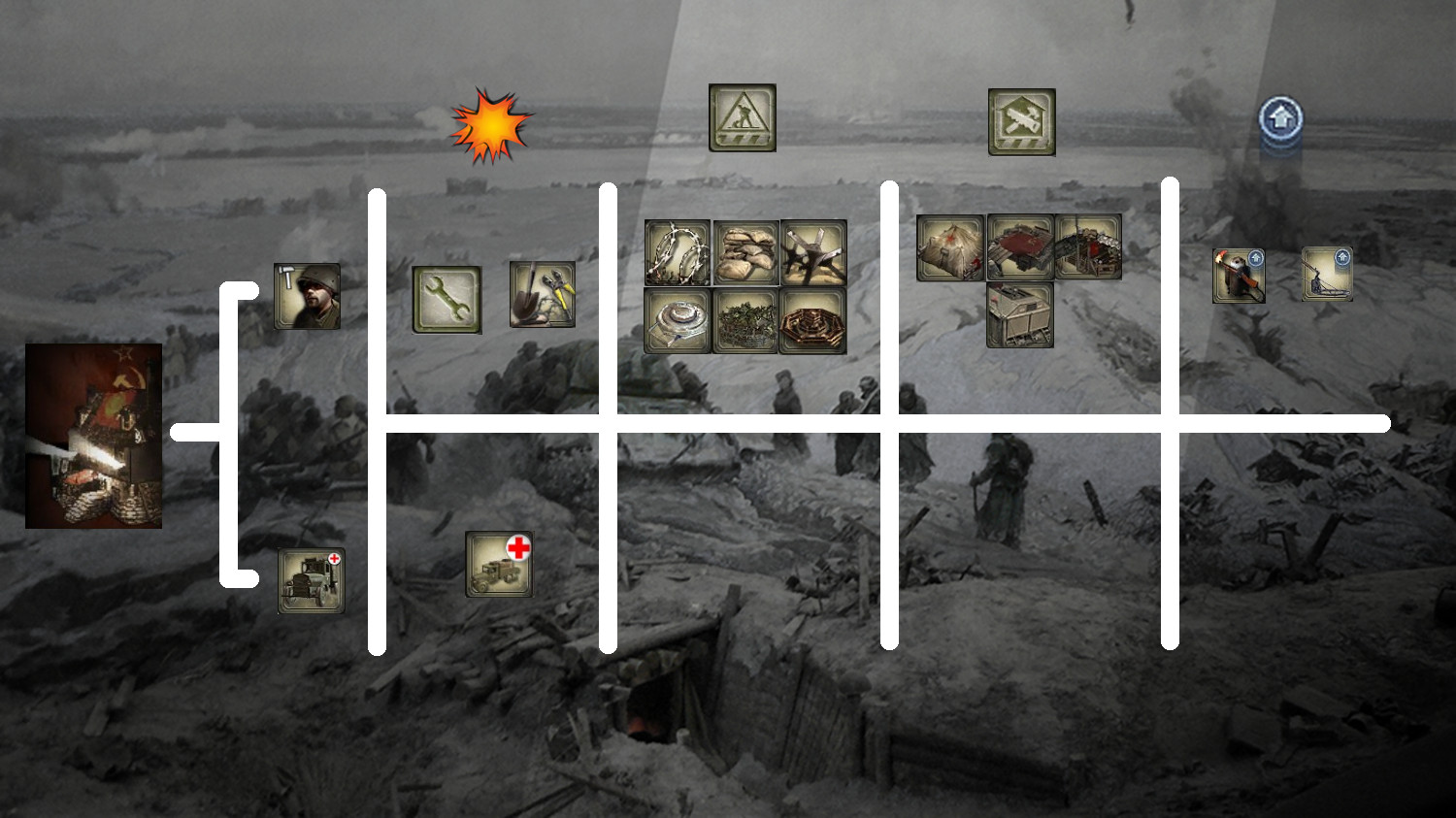 This building is the first one you can build and allows Conscripts to be recruited, however, they are called as reinforcements from the off-map area; Strelky, Command Squad, Observer Team, Sniper and Heavy MG Team units are recruited and come from the building as usual.

Conscripts and Strelky share the same defensive structures to build and also both have molotov cocktails as primary anti-personal device, while Conscripts have a rifle grenade to act as softcounter against armoured units and Strelky can purchase PTRS anti-tank rifles against enemy armoured support. When Strelky are upgraded to their Red Banner version, the leader gets promoted into an officer as well.

The Command Squad remains as a four men squad, however, it only has one active ability that is called "Strafniki Demotion", which targets Strelky and Conscripts squads: once you select one it will be converted into a Shtrafniki Squad (aka Penal Squad), with better stats and weapons but will no longer earn veterancy.

The Observer team is shifted more into a infantry - jeep type unit: it gets additional sight range in cover, has reduced chance to be hit by snipers and deals bonus damage against htem. The flare detects cloaked units and gives nearby enemy units a +25% received accuracy debuff. The Sniper... well it snipes units ;). The Heavy MG Team remains as usual, with some stats tweaked. 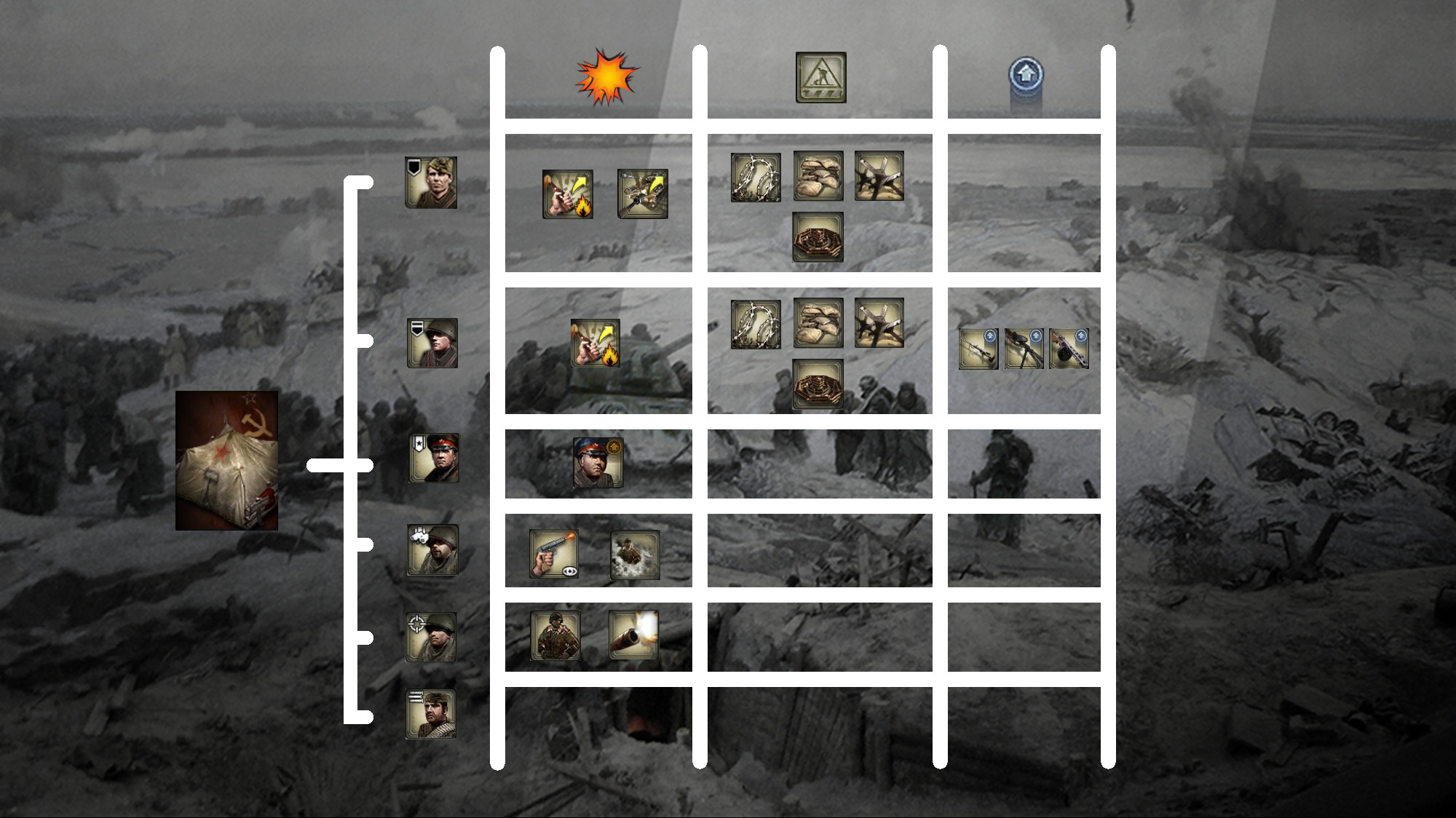 It allows to recruit the 82mm Mortar, but Heavy mortar squads can still be recruited later too and the ZiS-3 gun is also there with only stat changes; however, there are two new additions: the BA-64 and the T-70 light tank, the latter being unlocked after purchasing an upgrade from this very building.

Our BA-64 will act like a true armoured car and not like a Jeep, so don't expect some rifles will kill it too easy ;). 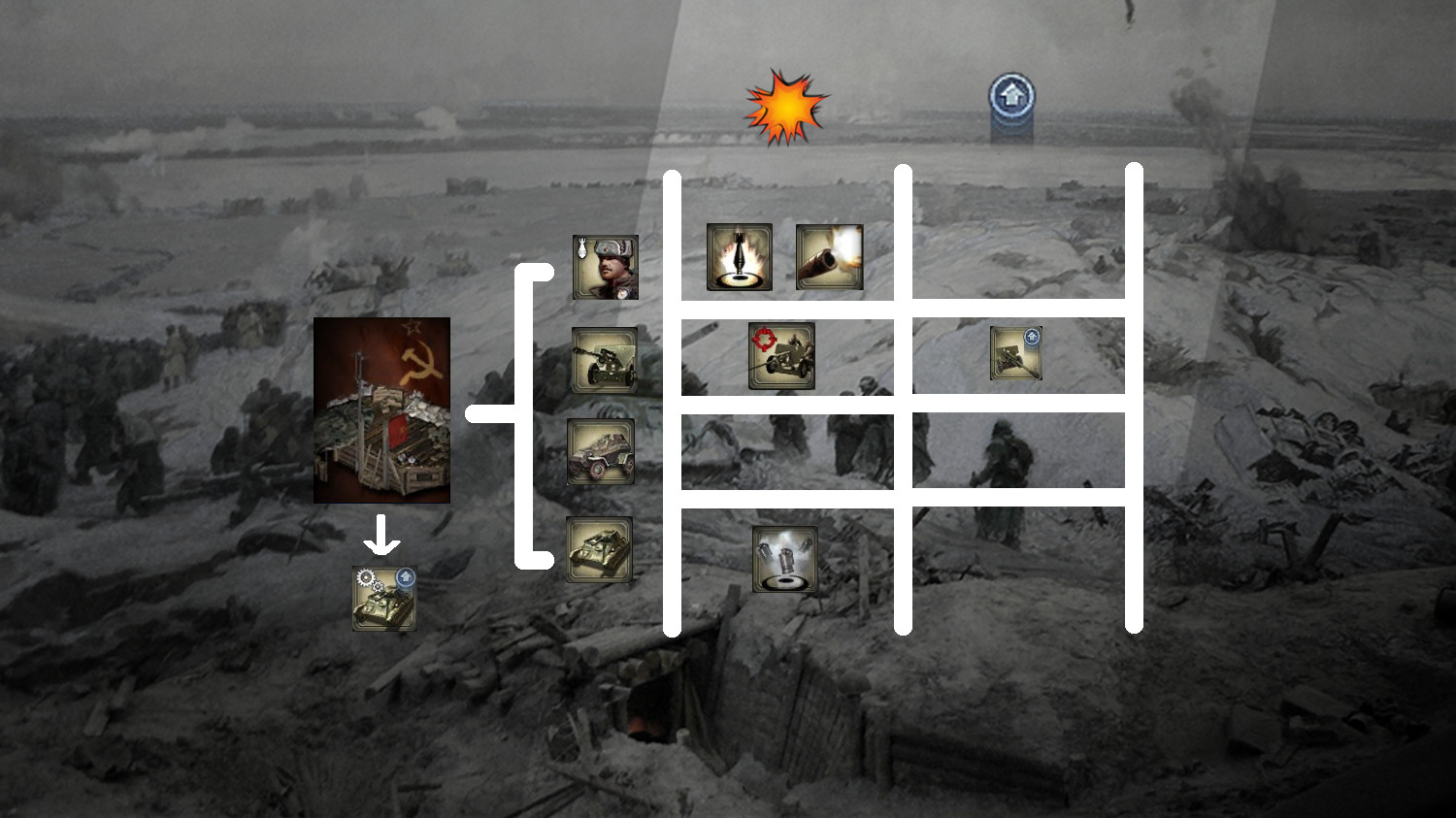 The T-60 no longer requires any upgrade, thus is available by default.

T-34/76 requires either Light Tankovy or Heavy Tankovy research to be unlocked. 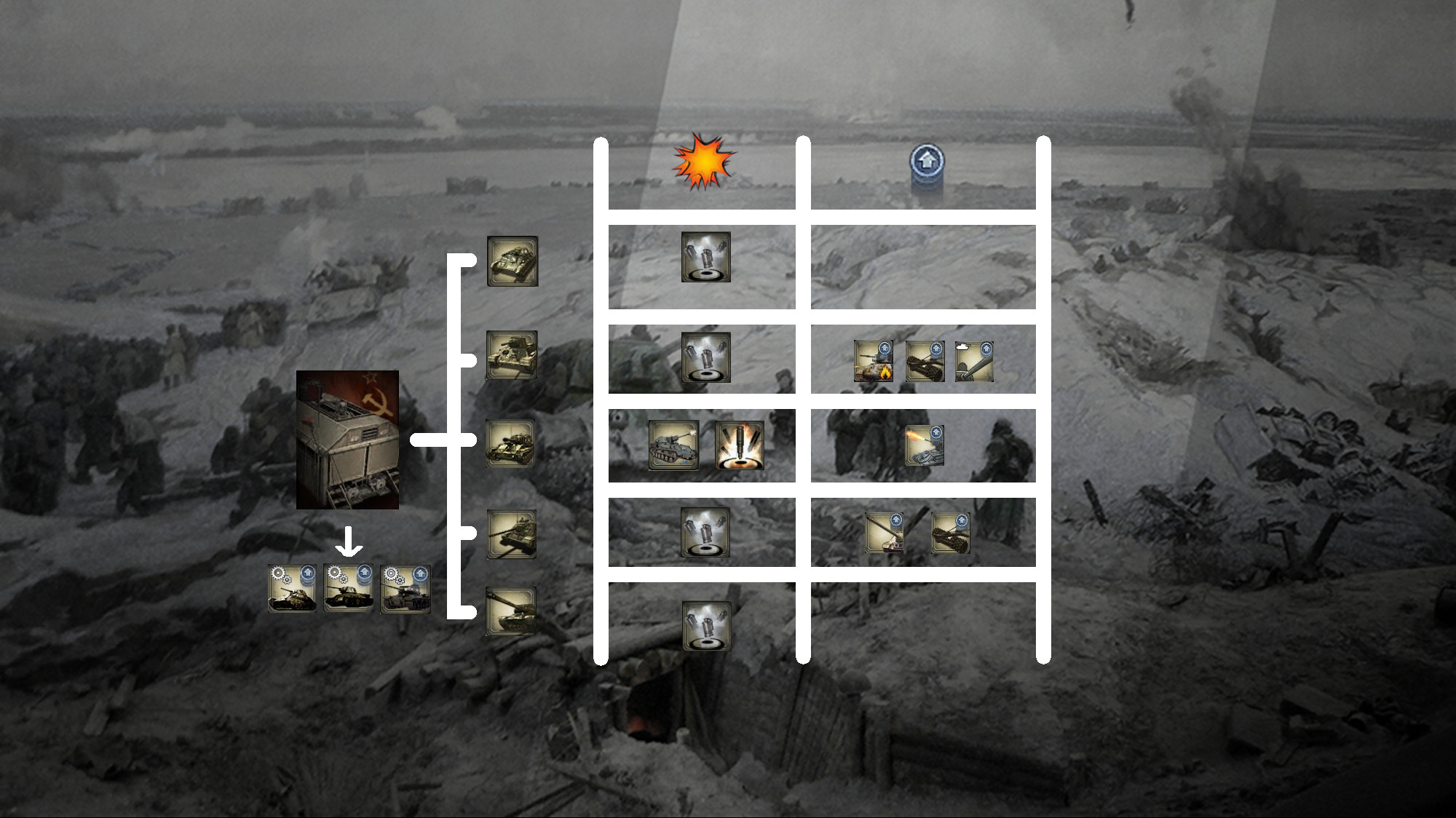 At the moment it contains seven upgrades: 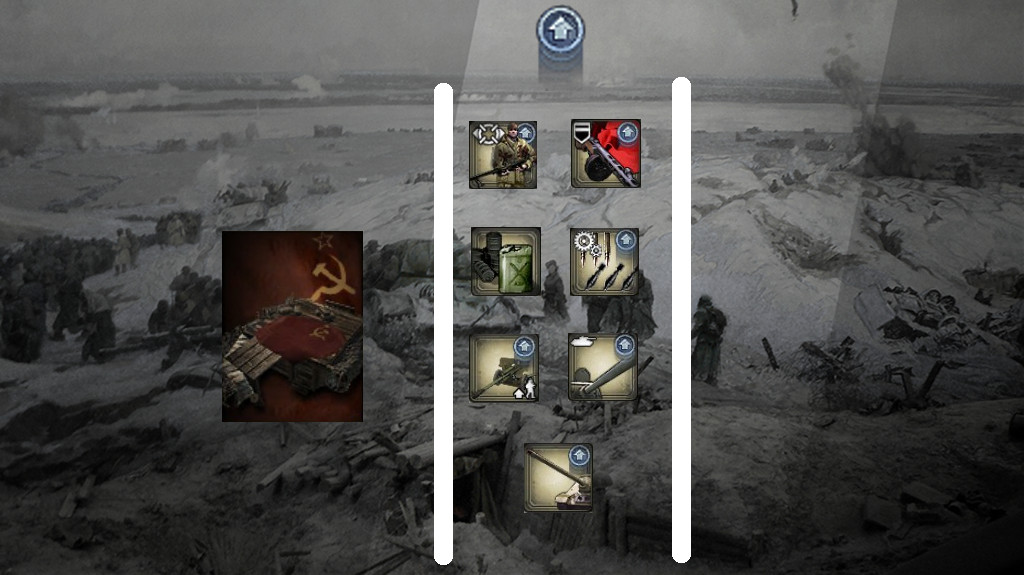 This might change slightly later, but there shouldn't be any huge or dramatic departures from this layout, we will be working in the next announcement to release it soon as well, so for now I hope you have enjoyed the update, and if you have a comment about it don't hesitate to share it in the comment section.

Why do you want a T-90? The thing didn't even leave prototype stage, it's inclusion in EF was always seemed like a cop-out so we didn't need to animate Soviet SPAAG trucks or static AA.

I'd like to see more tanks...Maybe BT or T28? Also, maybe command/observation upgrade for T34/85? That grants better vison range. Something like this : I.imgur.com
And a bit more heavy artillery would be good too.

Adding more tanks for the regular tech tree won't make too much sense, I'm not sure if we can add some of these tanks to the reward trees though, but I'd say the latter is more likely than the former.

About artillery, I think Soviets don't need more than what they have :\.

I'd like to see more tanks too, but models take time and unfortunately I'm working 40hrs a week these days.

im confussed can i just place my cd-key of coh opf in the steam thingy and still play both versions ?

@L3d
Yes, I think if you add your CoH CD key in Steam you will receive the "New Steam Version" which is the one compatible with our releases (just as if you would add any key from Humble Bundle to your library).

You will also have the old versions of coH available, but the mod won't work correctly with old versions of CoH, although there is a patch we made for compatibility of the latest EF with the patch 2.602 that was the last of the DVD version, but we don't offer support for that.

Good, will damage system be reworked?

"Strafniki Demotion" is a stupid ability.