This is the moddb page for ChrisJones Gaming's Star Trek XI Mod for Star Trek Legacy. The first release of the mod includes 11 models created by Baz1701 originally for Bridge Commander plus 4 Kitbashes of Baz1701's models put together by Muldrf specifically for this mod.

This is the Muldrf's Legacy Mission Editor 1.05, an improved version of Bethesda's Editor. This version is included as part of the LMTools Suite release 2L. I don't actually use this tool and longer by itself. I have only released this separately, as I noticed the file that was available for download here as 1.04c was actually 1.04b which didn't have all the required files in it to function. I then checked the program out and found some issues in it, so I fixed them and have repackaged everything into an easy to install program. (You still need Microsoft Visual Studio C++ 2008 Express to compile completed Mission Scripts.) Look for the LMTools Suite 2L shortly, which will include this release.

2. I moved the "Edit" which has that path across the menu bar to get it more out of the way.

3. I added a second Build Mission which is out on the main menu bar, so you don't have to click on Mission then Build. Saves a click that way.

4. I also changed it so that instead of naming the missions "stl17" etc it names them "tkm17" etc. Makes it easier to keep your missions separate from the stock ones when working with them more than just looking for capital STL or lowercase stl.

5. I also added a field to the Create New Mission dialog that lets you choose the folder and filenames that your new mission will use. I didn't put in a file check for preexisting folders or files so don't overwrite an install if you don't want to. If you leave it blank it will take the next available slot of "tkm##".

7. Added Icon to the program rather than the ugly default one. Added it to all "forms" in the program. It looks better this way to me. Got sick of looking at that default icon all day the last 2 days.

8. Added "_CRT_SECURE_NO_WARNINGS" setting to the compiler to eliminate some warnings that were annoying each time I compiled.

9. The "Output" Windows from Builds is now docked meaning it resizes with the window itself and reshapes as well. It's still word wrapped. It's a slightly different starting size as well.

10. Added File Checks on startup. It now checks for required files that would cause crashes otherwise. This helps if your setting up the first time or accidentally moved an important file.

12. Docked the About Box to resize text box properly.

13. Added Shortcuts to all the Menu options on the main screen. Hold Down ALT to see the keys. Example ALT+B = Build Mission.

14. Added Close button to the Outboxes. ALT+C will Close them. Also linked the ESC key to the Close Button so you can use that as well.

15. Fixed various Forms/Windows that shouldn't be resizable but where.

16. Can now pick DDS or JPG for the Image selection box on the mainform.

17. Close button on the Output boxes now stays at the bottom right corner.

18. Addition of the "Default" Mission Script files. This is a Generic script to use as a starter script. The files are to be located in the \Star Trek Legacy\missions\tkm01 folder.

19. The Configuration Path for the Compiler binaries now saves when changed. There are conditions that cause it to forget such as new compiles and moving it to another location. The Default location is the location of the 2008 bin folder "C:\Program Files\Microsoft Visual Studio 9.0\VC\bin".

20. Added "Changes List" Screen and option under the Help Menu.

21. "Edit" Screen has been changed so it will resize with the window properly to make using it easier. I don't ever use that screen(I use C++ 2008 to edit my .rul and .scp files), but while I was at it I fixed it up incase someone else does.

22. Changed the Default Script to be located in \tkm01 rather than \default there was some issue with it not creating the .vcproj files properly from the other name. I have updated the above 1.003-1.004 changes to reflect this location & filename change.

23. New "Exit" option on the main menubar. Seemed marginally more friendly to have a 4th way to close it.

24. Now Checks for \Parserul.exe to verify that the Mission Tools are fully installed instead of the "\missions\STL12" folder.

25. Now Checks for cl.exe in the Compiler path that is selected from the "Edit" menu and "Configuration" option before building.

31. Since the Wiki no longer exists I created a new text file and embedded it as well to replace the Wiki weblink.

32. The Legacy Mission Editor requires to be Run As Administrator on Vista and up, it now requests that automatically rather than giving you errors that it can not access files when it tries to write to them.

33. The About screen which displays the file "Mission Editor EULA - 9-Jul-07.rtf", will not cause a crash message if the file can not be found in the root directory, or the \Readmes\ subdirectory.

Changes from v1.000 to v1.003 3/21/2008
1. Added File Checks on startup. It now checks for required files that would cause crashes otherwise. This helps if your setting up the first time or accidentally moved an important file.

These include:
LabelMap_EN.xml
Objectives_Localized_Strings_EN.xml
\missions\STL12 (Folder to verify that the Mission Tools are installed to that location)

4. The Legacy Mission Importer requires to be Run As Administrator on Vista and up, it now requests that automatically rather than giving you errors that it can not access files when it tries to write to them. 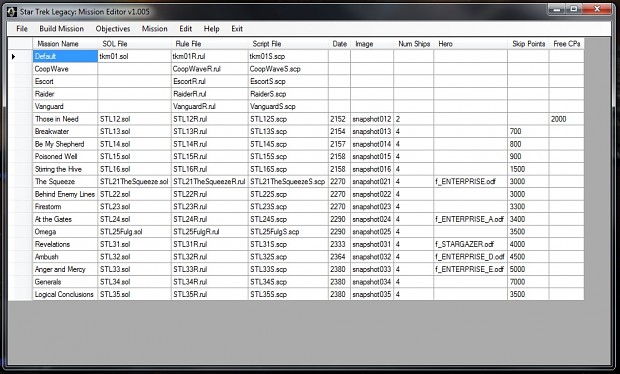 Does anyone have a tutorial / instructions for using this missions script editor?