CHPower is a free modification for Battlefield 2 (aka BF2). The objective of this mod is to provide a semi-realistic battle between China, Japan, the United States and the Middle Eastern Coalition. Also we aim to offer a chance for BF2 players to use state-of-the-art Chinese firearms and vehicles. This mod includes various adjustment ranging from physics (ie. destroyable objects/environment, missile to missile interception etc), new Head-Up Display design to visual effects (ie explosion and missile trail etc).

We are pleased to announce that CHPower 2011 LV (Light Vehicle) has been released. After working form dawn to dusk, we have finally uploaded the core and level files to the moddb’s database. As we promised before, we would provide new vehicles such as ChengDu J-20 and Type 96 WAPC for the sake of providing completely new gaming experience. 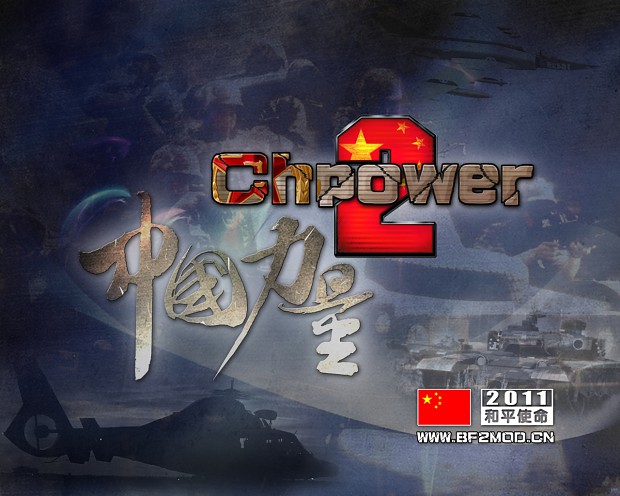 Initially we decided to provide F22J for the Japanese; however we have discarded our plan after realizing that it is nearly impossible to have F22 for the Japanese. Therefore we will use vBF2 F35 Joint Strike Fighter USMC Version as the placeholder. We will provide F35 Japanese Version by re-texturing in the future release.

We notice that some individuals, including the Battlefield Single Player Forum’s administrator, have suggested that we infringe other modification copyright...

Welcome to CHPower2011 Showcase. In previous months the ChPower Team is continuously working on the development of CHPower 2011. We have made remarkable...

Currently, we are still working on CHPower Version 2011. It is expected that we will release this latest version of CHPower in May 2011. Though we had...

Under intense work by our member,CHPower 2010 Lite is ready to release. Here is the core and level files

Where to find the last version 2013?
I'm searching everywhere but still nothing, help please

Hi, I would like to add the explosions effects of this mod ( At, grenade...) to my BF2.
I tried to copy/paste but game crashed. Help please. Thanks

Please someone can tell me how to get lots of destructible environment for normal BF2. ( like how to modify tweek ) thank you

ATTENTION!
MOD CHPower is certainly dead.But its latest verson is not you see on MODDB 2011,IT'S 2013! Why has it not been uploaded to MODDB yet?I guess one reason is the developers of CHPower completly gave up,felt quite tired,and lost the interest to continue,they even forgot to release their work on MODDB,just released on their own website.ONLY the insiders can get the download link(Only the accounts meet high needs have the access to visit the page in which you can find the download link.Here I leak the link: Yunpan.cn visiting password:c284).Another one is they have changed the mod's name.from CHPower to PeaceMission2013.Maybe they thought they had changed the name,the CHPower was no longer CHPower,it's PeaceMission 2013 ,it's DIFFERENT!(Kidding XD) Their offcial website:http://www.bfmil.cn/topics-115-1.fhtml

I think the links you provided are down now, can you please re-upload the 2013?

It's too hard to download ANYTHING from Chinese website,even I can speak Chinese a little.I have tried to ask for my other friends in China...FAILED!

what too hard?i don't know

That doesn't work at all for mandarin chinese

Good job, keep it up!