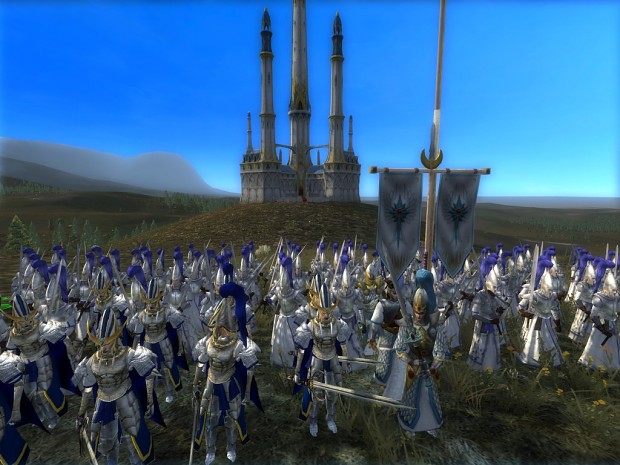 I feel like if I lick those models they would taste as good as they look. Also props to whoever made that building in the back as well as whoever made the models. Beautiful work!

SLURP... blegh! Boss! You's was right, dey even taste like a Panzee!

1 Up, I laughed harder than I probably should have.

This is the only Medieval mod that put so much work into armor upgrades. You can ******* see what you pay for. You guys are out of this world.

thanks man, its nice people appreciate it, its quite a bit of extra work.

that greek muscle plate is wayyy too sexy

"The Loremasters of Hoeth are invariably gifted warriors, for their intellects find even the exacting disciplines of the Swordmasters almost childishly easy to master. Similarly, each Loremaster has a faultless grasp of the principles of magical lore. However, he seldom wastes time in committing more than a sliver of battle magic to memory: he is concerned with weightier and more elusive spells that are little suited to the battlefield.

The path of the Swordmaster is not the only one taught within the Tower of Hoeth. Here can be found many disciplines of art, magic and war. Most scholars confine themselves to studying but a single path, honing their skills until perfection is achieved. Even amongst the rarified ranks of Elfkind, it is unusual to find an intellect capable of mastering an entire path, let alone show accomplishment in several -- but it is not impossible. Such is the achievement that marks out a Loremaster from a mere scholar.

Beyond this, it is rare to encounter two Loremasters who have trodden the same path to illumination. Even to an Elven mind, the realm of knowledge is a labyrinth, and none can explore all of its many chambers. Indeed, centuries of scholarship have left more than a few Loremasters with a touch of eccentricity. Nevertheless, no commander will spurn a Loremaster's services if they are offered, for their synthesis of magical fury and swordsmanship is truly formidable."