BTTC is a mod based in the 4th era of Tamriel after the dragonborn has defeated Alduin, yet the civil war of Skyrim still rages on and the Aldmeri Dominion keeps doing their thing, treating the empire like a puppet. This time however, Yokuda has joined the feud. The goal is a single player experience featuring all of Tamriel + Yokuda, with hopes of making a multiplayer mode after the full release of the mod.

Behold the lands of which you will siege and conquer! 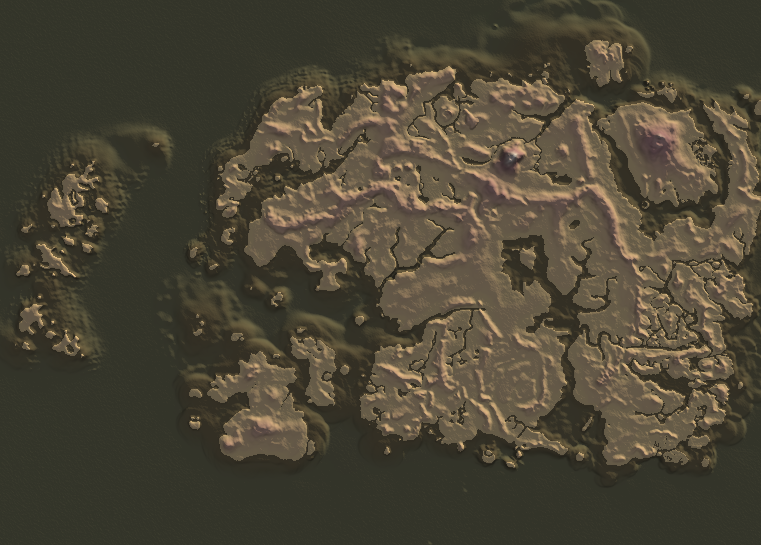 So an update on the progress is finally due, and I know many people look forward to the mods completion (me included).

To be frank the mod got a long way ahead, so I'd say you should probably try some of the already released mods meanwhile.

However, the main map..
I've spent countless of hours in between balancing going to work and being home and working on the mod, as I have begun working again. I've been having the height map in World Machine, playing around, porting the map back and forth and fixing the terrain and I think it's almost ready for the first towns and nations.
Working on the main map has been fun, especially when I've had to dig into Elder Scrolls lore and read about all of the different regions, landscapes and even when I had trouble finding something such as pictures of those places (from canon sources) and having to recreate it the best I could while making it Bannerlord friendly.
Before adding towns to the map, I wanna work on the mountains a little bit more, then after towns, battle scenes for each place.

I hope you enjoy this preview of the main map and I hope you stay safe within your homes :)

This article will talk about the mod and its intended features, while also aiming to recruit a few extra hands.

In case you weren't aware of this Elder Scrolls modders resource; it may help: Nexusmods.com

is this mod alive?

I just wanted to ask how you intend to handle the fact that in native towns and castles each have a couple villages. The games don't really provide enough villages for that (there are eight "villages" in Skyrim vs nine towns (and it looks like you intend for towns to remain towns on the map)). Will you invent your villages then? And if so,

Didn’t Yokuda sink into the sea though?

Most of Yokuda sank into the sea :) Some survived (Search "TES Redguard Yokuda Map" to find the canon map of Yokuda)
The rest of Yokuda has remained in contact with Tamriel up until 3E, where ships from Anvil sailed to and from Yokuda.
I'm unsure about how the traffic would've gone after the great war.

I sent a PM, awaiting your response.

Hurray, 'Skyrim Two' is finally announced!
There had been some mods what tried to bring Tamriel to Mount & Blade before, but couldn't even reach the early access point... I hope this time, with this game things will be different, and we will see the glorious dawn of The Elder Scrolls with M&B gameplay mechanics!

The map looks a bit rough right now, but dope, it shall be wonderful.

The map will be absolutely *stunning* when it's finished, I'm sure of it!