Using Black Mesa assets as well as much of our own custom made content, Hazard Course features a complete re-creation of Half-Life's training level, including new dialogue and voice acting, HD models, textures, and detailed environments.

Black Mesa: Hazard Course is officially released and can be downloaded for the mod version of Black Mesa. 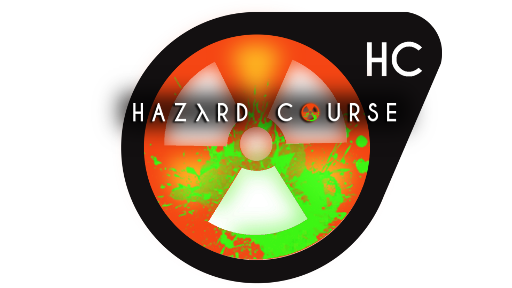 Today, Hell hath frozen over. Our Lord Gaben has smiled upon us, and DKY has finally removed the shackles from our wrists (those things were starting to bruise.) We're pleased to announce that the Black Mesa: Hazard Course has reached completion, and today is the awaited release day. After over three years in development, we hope it was worth the wait. 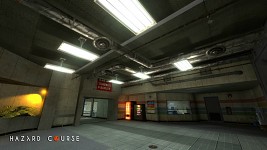 As of right now, the mod is only compatible with the mod version of Black Mesa. You can download the mod via the button below. Below that is a quick Q&A that may answer some question you have. If not, feel free to ask, and we'd be happy to answer!

Oh and by the way, the timer actually works. You'll know what I'm talking about when you see it.

We're currently working on an updated version which we will submit to Black Mesa's Steam Workshop at a later date. No ETA on that, yet, however, but rest assured, we'll get that to you Soon!™ Additionally, if anyone would like a hands-on look at the mod's history, we plan on releasing all 4 of the major Alpha builds at a later date as well, so keep an eye out for that, if that's your thing. You'll be surprised how much things have changed. 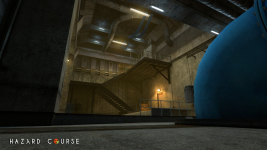 What is the Black Mesa Hazard Course?
An add-on for the popular Source mod Black Mesa. It is a total recreation of the missing Hazard Course training level. 1GB of new maps, models, materials and voiceovers.

Is this mod compatible with other Black Mesa add-ons?
Yes and no.
We have tested for compatibility with the following add-ons:

They're totally compatible after taking these two simple steps:

1 . (OPTIONAL) Install a caption patch which can be found here
2. Rebuild the scenes.image (may not be necessary if you've installed the above caption patch)

That should be all, but if you encounter any errors, let us know so we can get it sorted out.

I found a bug! What do I do?!!!?!
Crap.
Okay, don't panic. You can PM one of the devs about it, hit up our thread over on the Black Mesa Community Forums, or even just leave a comment here on ModDB, preferably with a concise description and a screenshot if possible. 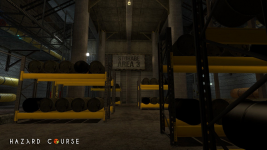 What will your team do now?
For one, we're officially naming ourselves PSR.

We'd all love to work on another, larger project together. We've learned so much, both about development and teamwork. We're currently shifting ideas and planning. In the meantime, some developers have other projects separately.

That's all, guys! It's been a great experience (mostly) and we're glad we could finally push this out to you guys. Your support kept us motivated and got us far, so thank you. We hope you guys enjoy it! Whether you love it or hate it, be sure to let us know!

Look out for the upcoming Steam Edition, as well as Hazard Course: Infinity!
(Just kidding!)

Will this be on BM Steam Workshop or Moddb only?

"We're currently working on an updated version which we will submit to Black Mesa's Steam Workshop at a later date. No ETA on that, yet, however, but rest assured, we'll get that to you Soon!™"

BMS team should make this official so it get's closer to full completion plust Xen too in the near future I hope.

Can you do me a favor?

Ok Crypt I'm sorry I didn't look at first I was in a rush I get it.

Actually, with my captions mod, you won't need to rebuild a scenes.image file as
most HC versions of my captions mod already have that file in for anyone wanting to play Hazard Course and Surface Tension Uncut, HC and Uplink, or all three mods combined without problems.

To everyone wanting to use my captions mod, please follow the steps I have made for this caption mod and patched maps (for anyone wanting to see the inbound captions and the last OAR lines). Here's a link to my post: Forums.blackmesasource.com

I mentioned this already in the forums, but if you downloaded the HC and Uplink or those 2 with Surface Tension Uncut combined versions of my captions update earlier, please download it again. It will have the same HUD hints as you would see if playing Black Mesa with HC alone or HC and Surface Tension Uncut.

Any particular reason it wasn't worth the wait?

Congrats to you and the newly formed "PSR"

Congratulations on the release! Now I'll be waiting very patiently for the Steam workshop release :3

edit: lol I blame my phone

You big boys have done a magnificent job, congratulations.

Holy **** all this stuff that happens when you go berserk HAHAHAHA you guys rock!

Not just a 1 on 1 remake of original hazard course, but a lot of interactivity,dialog,additional areas, and easter eggs were added. I liked it quite a bit, you guys did good.

Everything cool about the add on would be broken, and you literally wouldn't be able to progress properly due to bugs.

So, I guess I should wait for it to be released on the Steam workshop or download the mod version...

I'd like to know when the STEAM version will be the release?