Source modification that recreates storyline from 1999 or so called the Hyper-Era, based on many of its concept arts, while having some twist to keep things fresh, and tries to achieve the level of detail Psilocibinum's Cremation mod had done. 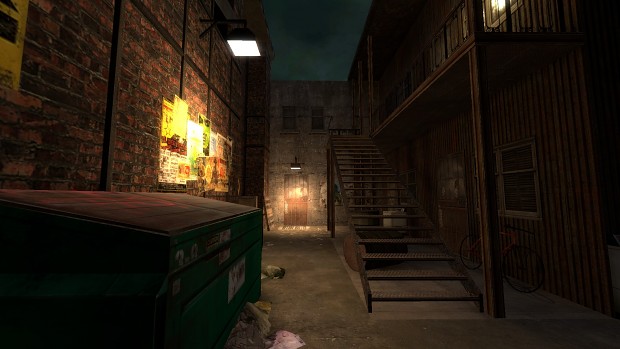 Ah, this here looks me like the alley where to-be-sergeant Mitchell threw a bottle of liquor, very important event.
But for real, this looks great!

Alright, I was absent as I was working on making Japanese subtitles for my friend's game called g-string. I had to catch up to the release date so people could play it just in time. So I worked on it straight to it when i got home from school, and done that from 8pm to 2 am monday to wednesday. So i didn't have time to focus on this. Please don't say "this mod is dead" when i just released some updates on it just a week ago. I have life and school to do. Just saying this so people won't whine in the moddb comments about it.

In the meantime, check out my sweet friend eya san's game!
Moddb.com