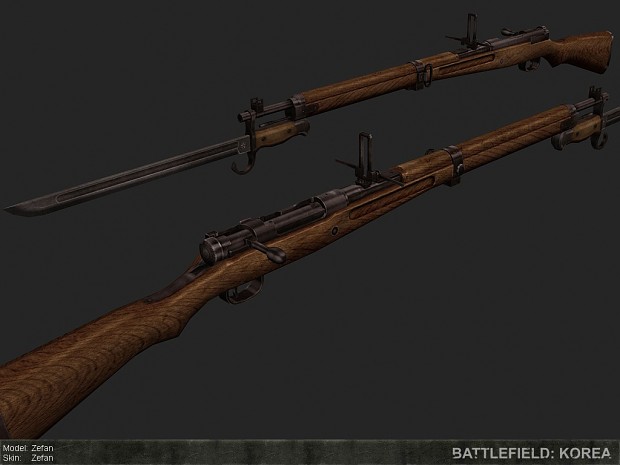 Here is something we have been trying to get animated properly for years now. The older Arisaka we had was donated to us by the Forgotten Hope 2 Community Map Pack, and while it was a great model, it always looked a bit different to our other guns so it stuck out.

We have the signature fold out Anti-Aircraft sights, as well as type 30 bayonet, and rifle grenades. The AA sights are especially great for targeting with rifle grenades.

The Type 99 rifle Arisaka or Type 99 short rifle (九九式短小銃 Kyū-kyū-shiki tan-shōjū) was a bolt-action rifle of the Arisaka design used by the Imperial Japanese Army during World War II.

During the Second Sino-Japanese War in the 1930s, the Japanese soon found that the 7.7mm cartridge being fired by their Type 92 heavy machine gun in China was superior to the 6.5×50mm cartridge of the Type 38 rifle, necessitating the development of a new weapon to replace the outclassed Type 38. The Imperial Japanese Army (IJA) developed the Type 99 based on the Type 38 rifle but with a caliber of 7.7mm. The Type 99 was produced at nine different arsenals. Seven arsenals were located in Japan, with the other two located at Mukden in China and Jinsen in Korea.

The Type 99 was produced in four versions, the regular issue Type 99 Short Rifle, the Type 99 Long Rifle (a limited production variant) and takedown Type 2 Paratroop Rifle and the Type 99 Sniper Rifle. The standard rifle also came with a wire monopod and an anti-aircraft sighting device. The Type 99 was the first mass-produced infantry rifle to have a chrome lined bore to ease cleaning. All of these features were abandoned by mid-war.

During the Korean War, the Chinese People's Volunteer Army, and Korean People's Army used this rifle in significant numbers due to large amounts being captured from Imperial Japanese forces during and after World War 2.