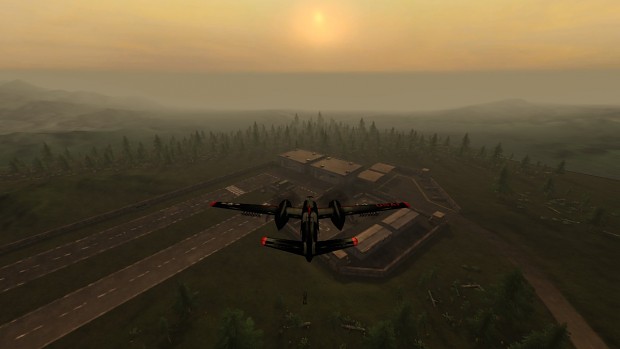 The Douglas A-26 Invader (designated B-26 between 1948 and 1965) is a twin-engined light bomber and ground attack aircraft. Built by Douglas Aircraft Company during World War II, the Invader also saw service during several major Cold War conflicts such as the Korean and Vietnam Wars. A limited number of highly modified United States Air Force aircraft served in Southeast Asia until 1969. It was a fast aircraft capable of carrying a large bomb load. A range of guns could be fitted to produce a formidable ground-attack aircraft.

The B-26B variant had 8 .50 cal M2HB nose guns, along with 3 more on each wing for a grand total of 14 forward firing mg's. It also has twin .50 cals on both the top and rear gunner turrets. In addition to this there are 7 FFAR rockets on each wing for 14 total, as well as 2 Napalm canisters, and 8, 250 pound bombs.

B-26 Invaders of the 3d Bombardment Group, operating from bases in southern Japan, were some of the first USAF aircraft engaged in the Korean War, carrying out missions over South Korea on 27 and 28 June, before carrying out the first USAF bombing mission on North Korea on 29 June 1950, when they bombed an airfield outside of Pyongyang.

B-26s were credited with the destruction of 38,500 vehicles, 406 locomotives, 3,700 railway trucks, and seven enemy aircraft on the ground during the Korean War.

The Chinese PVA were especially respectful of the aircraft and were terrified by its devastating effect attacking their night time supply convoys.

This amazing aircraft was exported and coded for BFK by General_Bradly, tweaked by Nadvgia, and the historically correct “Versatile Lady” Night Fighter texture was done by Anthony817. Clivewil also helped fixing some issues with this aircraft.