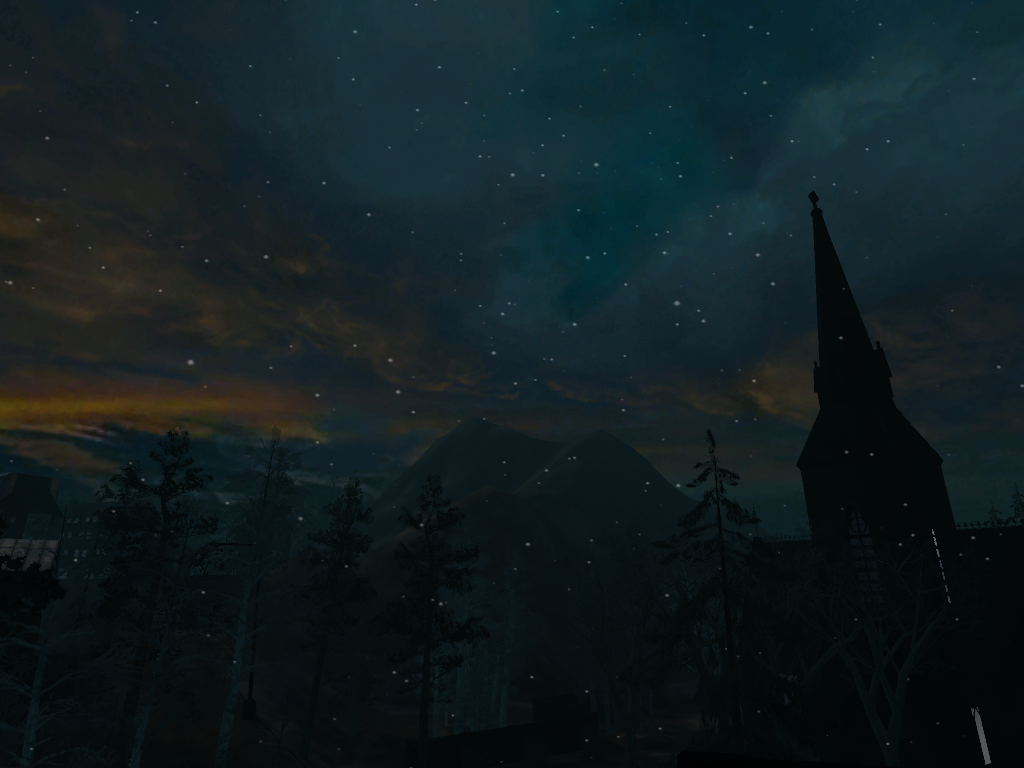 YOU CAN SUPPORT MY MOD BY DONATING, DONATE OPTION WILL APPEAR WHEN YOU PRESS DOWNLOAD NOW BUTTON ON SECOND SITE.
THANKS IN ADVANCE FOR ANY DONATIONS!!!


About mod:
Available languages: English, Polish (is only additional language, not everything is in Polish)
Patch required: 1.51
​Base game is ofcourse required to play the mod.​

Story:
In 2142 year unknown illness suddenly attacked all PAC, slowly in shadows changing them to zombies.
EU without any preparations need now fight and destroy all undead forces, to save humankind from death.

EU was surprised what happened to PAC soldiers, and at beginning they didnt knew anything about "new enemy". Standard weapons was not enough against zombies, so they had to create new much more stronger.

Flyers are recon units of EU force. They can fly by special parachute, which makes them safer, than others and gives them advantage in long range attacks.
However, they are not good in short range combat.

Paladins are specialists in rifles, they have the most ammo and uniqe ability to heal and revive injured soldiers. However, they are not good against large groups of zombies.

Demolishers are main attack forces of EU. They have the strongest weapons, and are very good against large groups of zombies.
However, their weapons need more time to reload, and this is their weak point.

Protectors are good defenders. They can put "Defense Turrets" which can guard area or put shields that will block zombies from passing.
However, their attack is too low, to fight against zombies without setting and preparing defense.

Hunters are units trained to diversive and close fights. They are masters in close range combat and sneak attacks.
However, they don't have any good ranged attacks, and can't equip armor with lights, due to their fight style.

Nobody knows from where or how they came, the only one information is that unknown illness changed PAC soldiers to zombies, which main target is to destroy everything.

Zombies are strong in short combat, and they usually attacks in groups. Also some zombies can use weapon, that damages vehicles.
However, they are not intelligent, and they can be easy eliminated from long distance.

Ghost Zombies are the most dangerous zombies, and it's not by strenght, but by 100% invisibility.
It's not possible to see them by eyes, only radar can see them, and for now weak sides of them are unknown.

Regeneration - unit is healing some amount of it's health over time;
Vampire - if unit with this skill defeat any enemy, drains some enemy tickets and add it to own team;
Sneak Attack - unit can perform special attack, which is hard to avoid when in range;
Invisibility - unit is 100% invisible, and can only be seen by radar or by 3d map;
Longer run - unit can run much longer, because it's stamina loose is small;
Faster stamina recover - unit recovers very fast it's stamina;
No stamina loss by jumps - unit not loosing stamina when jumping;
Strong armor - unit have better resistance to all attacks, and it's harder to defeat it;
More health - unit have some additional health;
Special camouflage - unit use special camouflage which makes it harder to see;
"Vehicle" caller - unit can summon special vehicle to battle;
High jumps - unit is equipped with special weapon which allow it to perform high jumps;
Repair - unit can repair friendly vehicles;
Resupply - unit can resupply friendly units;
Heal - unit can heal friendly units;
Revive - unit can restore friendly unit's health in critical state;
Fly - unit is equipped with special weapon and can fly;
Beacon - unit can plant a spawn point at which all friendly units in squad will spawn in pod;
Plant turrets - unit can deploy special turrets, which will guard area where they are deployed;
Plant shields - unit can block enemy, any kind of missiles or way by special shields;
Drone support - unit can call special drones which will support it in combat;
Silent beacon - unit can deploy a spawn point which can be attached to many surfaces and at which units in squad can spawn;
Wide attack - unit can perform attack in short range which attacks all enemies in max 180 degree;
Fall resistant - unit is immune to fall damage of some surfaces;
Needle - unit have weapon, which can pierece enemy active shields.

This and site on itch.io are the only sites where I upload mod files, also I cancelled/removed previous versions due to some problems, so I'm not taking any responsibility for any uploaded files related to my mod in other sites, but users who uploaded those files and I didn't agree to that.

1. Fortress mode:
a) Now except standard tickets EU have health points of their Fortress - if they will reach 0, Fortress will explode and round will end with loose for EU;
b) 5 bots are added to help player fight against zombies;
c) Some small tweaks for this mode.
2. AI - AI of zombies and EU soldiers is tweaked a little, so they now should be more aggresive versus enemy.
3. Added more zombies, now is 100!
4. Changed flamethrower's effect to better.
5. Bug fixes.
6. Weapon and Vehicle balance tweaks. 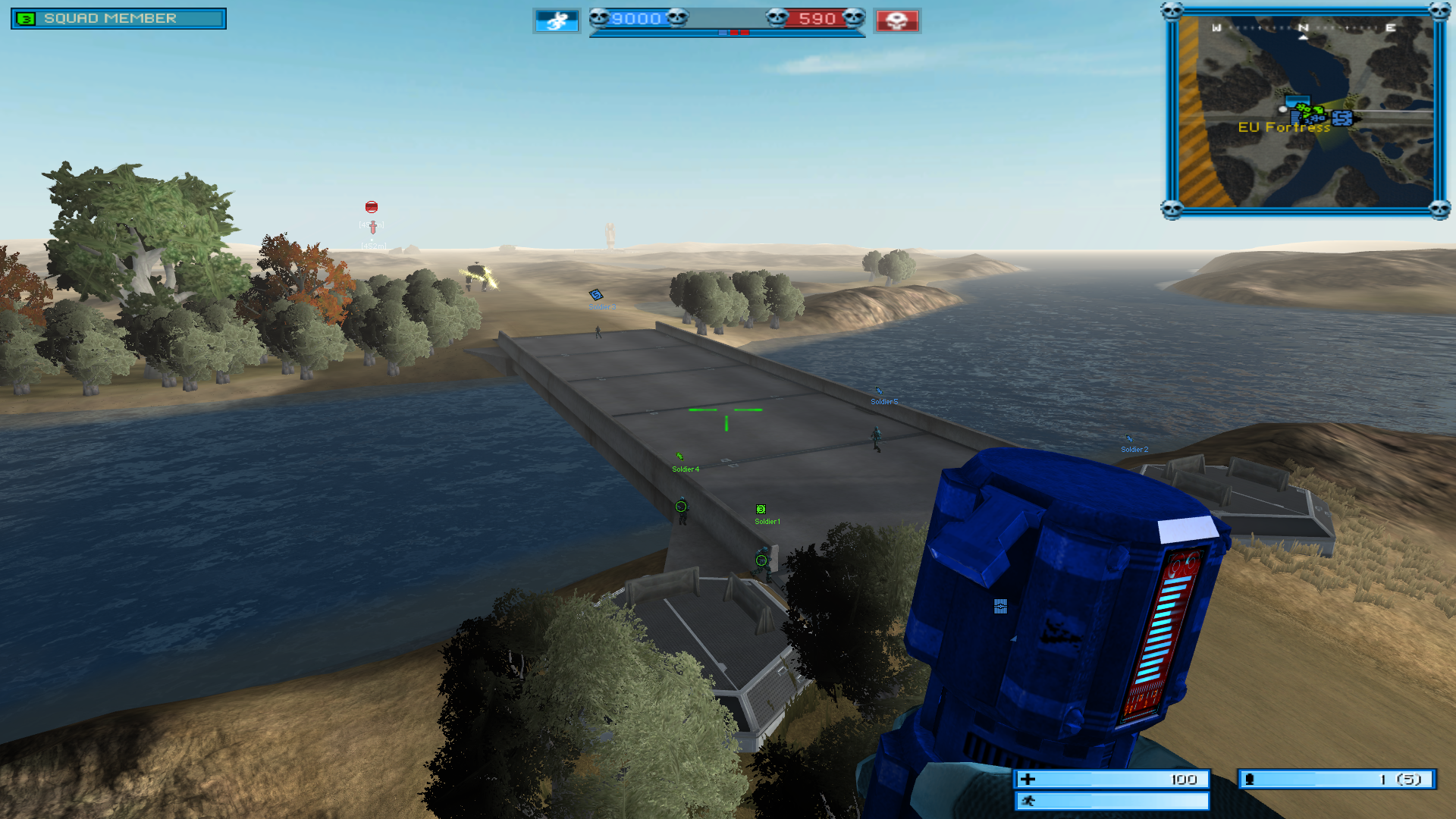 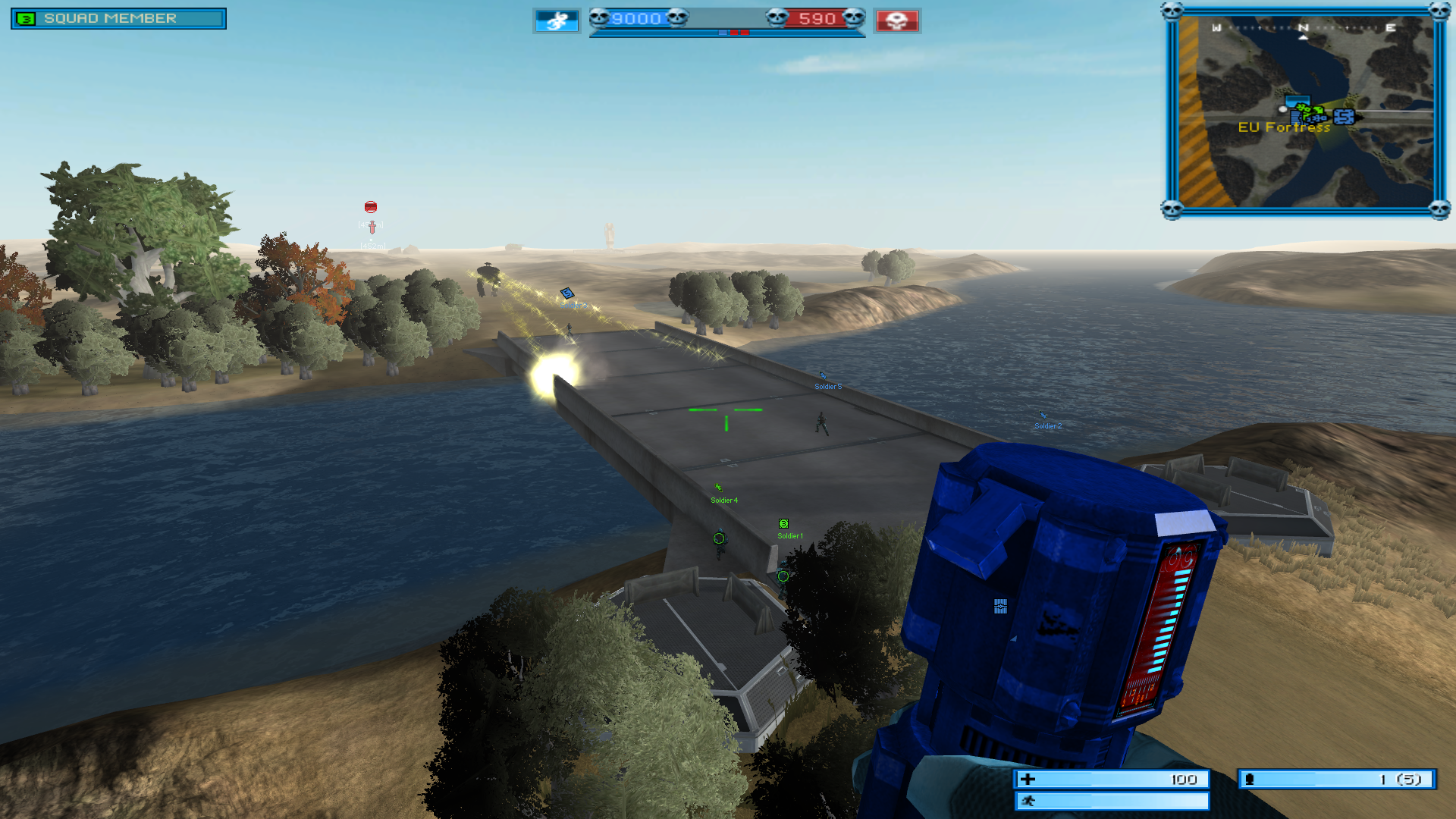 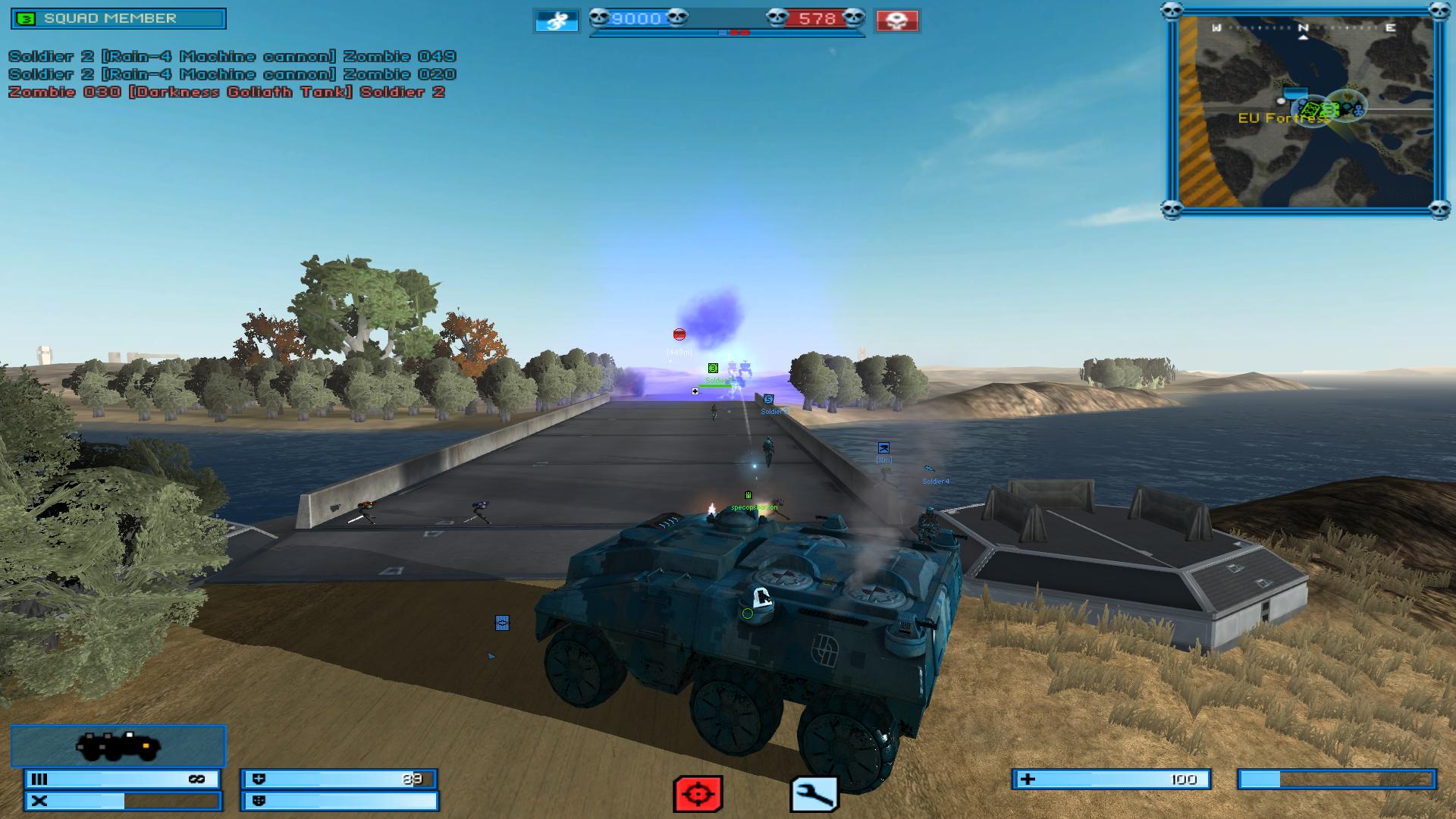 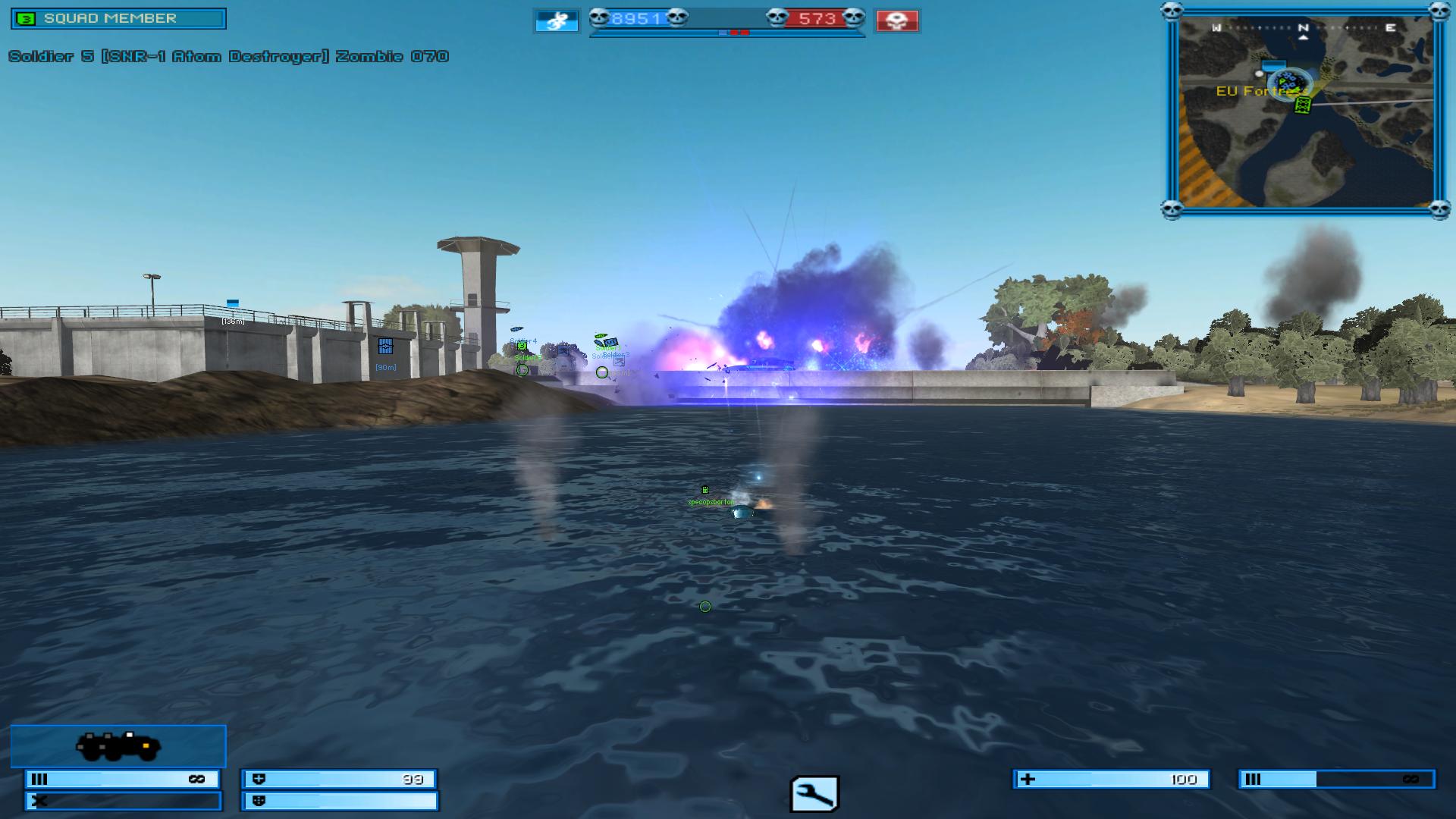 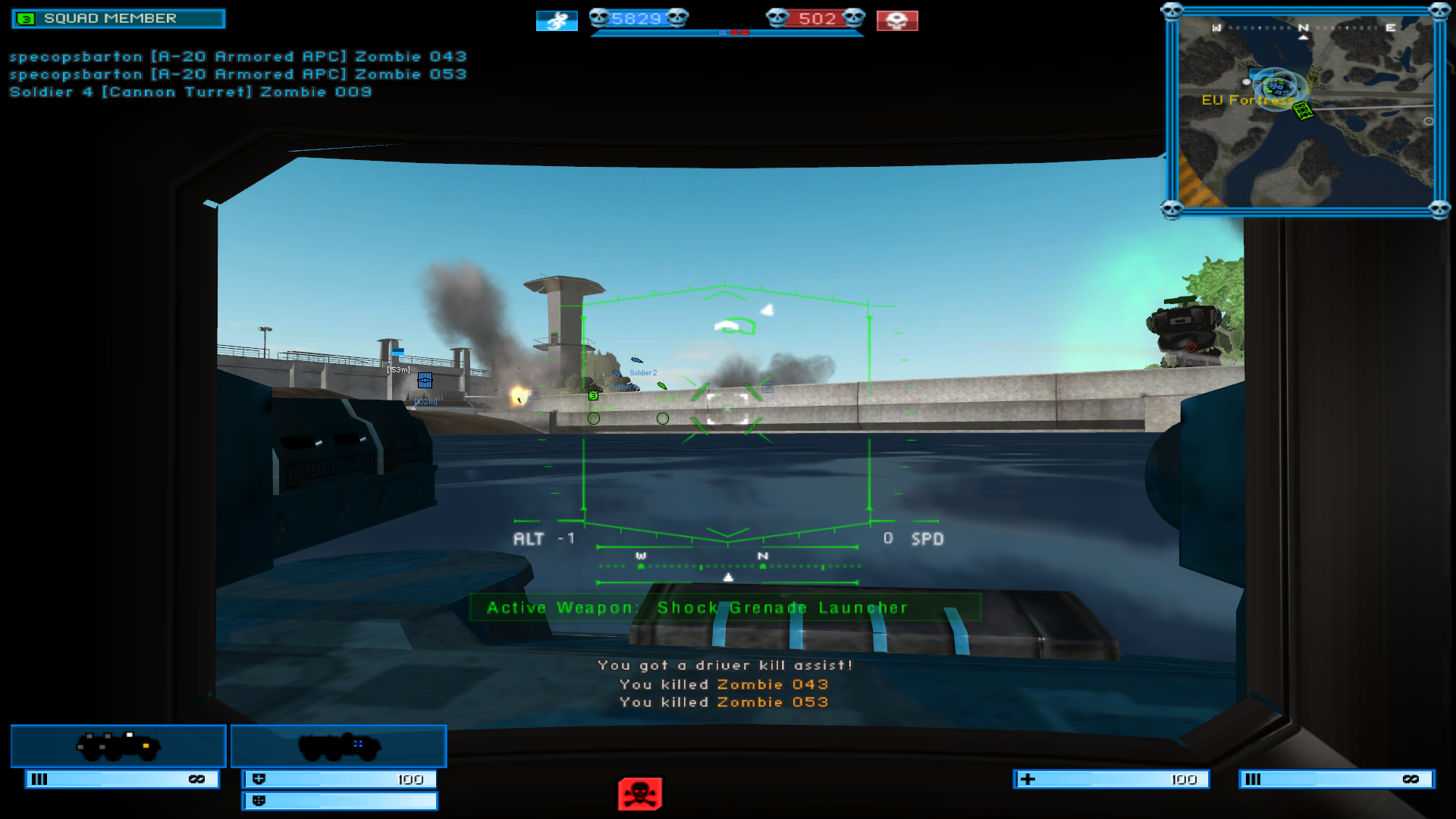 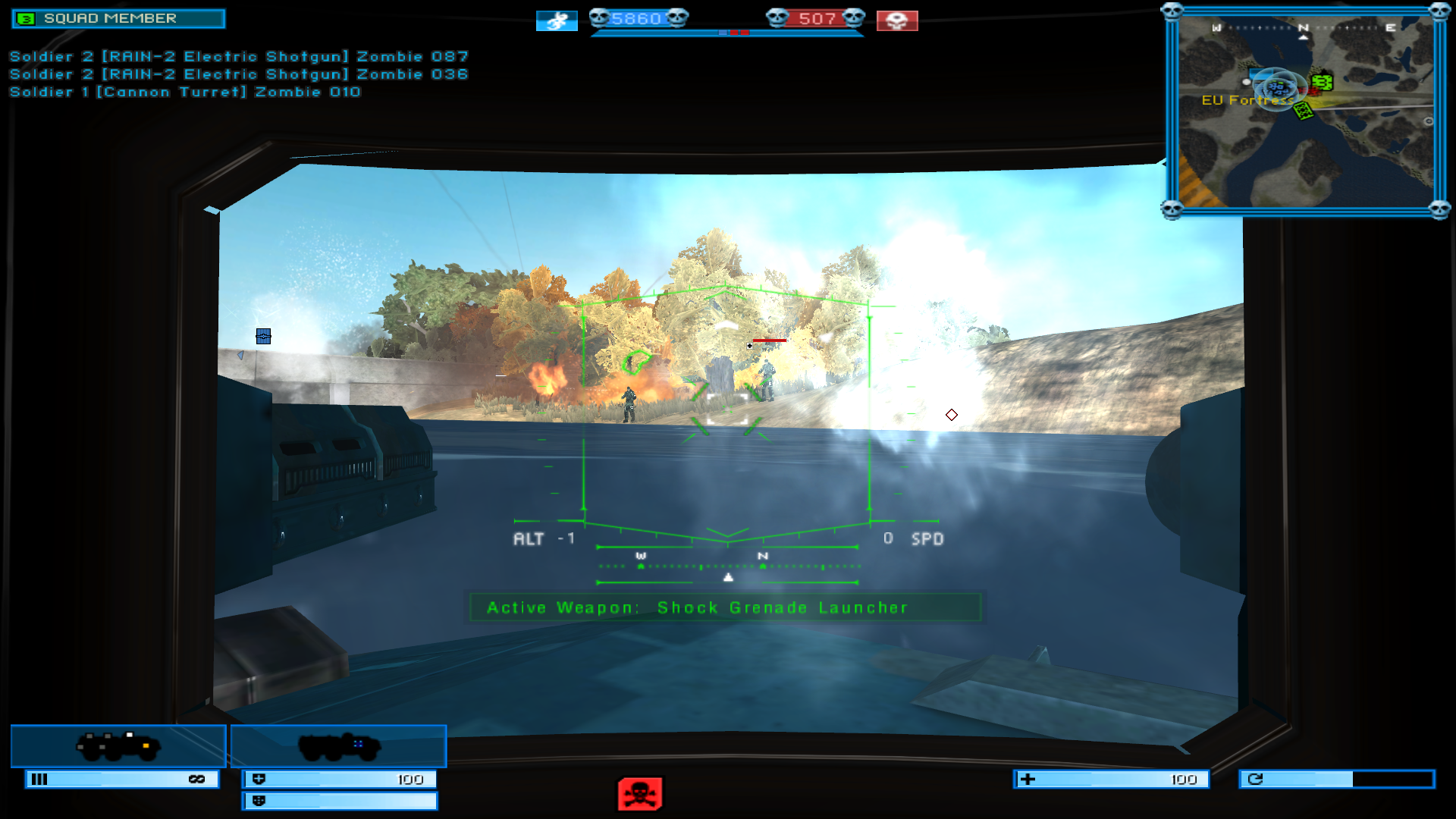 I hope you will enjoy it, remember, if you will find any bugs or other problems, post it in comments.

You can get it here:

Don't forget to remove previous version, before installing new one!

You can show your gratitude for my hard work by donating - press download now button on second site and donation option will appear, thanks for any donations in advance!

Remember, to play Fortress mode, you need to choose Multiplay/local and then map Highway Tampa 64 players.

Unsure future of my mod

What will be with my mod in future I don't know, read full article for more info.

What will be in new upcoming version of Zombie Assault Mod 1.4 Alpha.

Another version of my mod is released, it is Alpha 1.3!

Zombie Assault Mod Alpha 1.2 released, you can download it!

Guys please stay away from guy called " NOMAD/031098-010241 ", he is trolling and insulting others (he already done that to me), also if he can't anymore troll or insult he give lowest reviews to mods and other stuff you own to make you angry and provoke.

Hello there, I remember in an older version from 2014 or like that there was a different main menu theme song. Can you tell me the name please?
I don't have the old client anymore and I'm still searching for this song without any success although I understood the lyrics and tried searching by using them.

It was so long ago, that song was from a game called "Black Moon Chronicles (1999), Spernere Mundeum", but I am not sure if you asked for title of this song.

That's the one I was looking for, thank you!

Can i still play the old mode which was before the update?

Which old mode you mean? Fortress Mode you can only play when you choose 64 players map Highway Tampa, rest modes you can play normally.

This is what i wanted to know...

Hi guys, after very long time I am back! I started to work at my mod again :)
Sorry for no files, but many things must be done, and before that I cant release any version.