August 24th, 1973, went down in history as the day a huge orbital platform entered Earth's orbit from the hyperspace. No one knew where they came from or why they came here. But what the visitors did would never be forgotten. The platform deployed a huge cannon and obliterated the entire moon base, taking a large part of the moon with it. Earth was spared.

August 26th, a strike force and three scout teams left the platform for Earth. The first probe hit Johannesburg, South Africa, quickly subjugating the population and establishing a foothold. The second probe landed somewhere in Oceania, its fate remaining uncertain to this day. The third probe landed near Stalingrad and was destroyed by the Russians, who suffered heavy losses battling against it.

The main strike force landed near Chicago. Its sole purpose: annihilate all that stood in its way. The United States was unprepared for such a major force suddenly appearing within their borders. By the time responsive action was authorized, half of the States had been reduced to ashes. This left the Allies with only one choice: to cut their losses, evacuate, and leave for Europe to regroup.

The 26th will be remarkable for another event: when the outside forces entered the atmosphere, communications jammed, robots and drones turned against their creators, radio networks around the world went dead and satellites went missing. It was Doomsday in every way possible.

A new era has begun. An external force has descended to oppress all of humanity... The future depends on what the remains of mankind does next. It depends on you, Commander.

One journey might end... but there are still steps to take 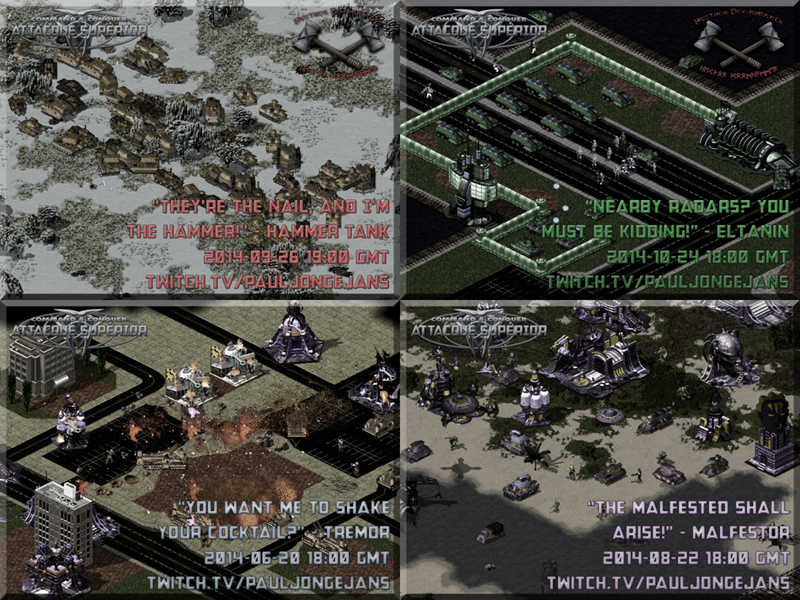 Five years anniversary - and an announcement

A summary of what passed in the five years, an apologize I owed... and a plan of what will come.

Because that's how RA2 mods tend to make infiltration worthwhile.

Okay, that is a valid point. I will look into toning down the AI as part of introducing difficulty levels. The current AI is mostly closer to what I'd call as Heavy anyway. Thank you for the feedback.

A bit late response, but devtest-20200105 should resolve your AI issues. Atleast the Normal AI in that build should be more casual. Feedback is welcome.

AS will go unreleased for the foreseeable future. For Valiant Shades (renamed from Valiant Hearts because an accidental name overlap with an Ubisoft game), you can see Github.com with Github.com as install instructions.

Do you know the date of the actual release? We here are so hyped up and want at least a demo, something playable.

So what exactly makes OpenRA a lot more moddable than YR, even though the 2.5D graphics are still in development? I honestly think that YR is better because INI is so easy to get a handle on. It's also not hard to make new voxels and MIX files for mods and other stuff like that. Finally, OpenRA's RA2 mod absolutely does not work on older systems (believe me, I tried).

Sorry for late response, I literally burnt out from AS to even track ModDB for some months now. There are just too many RL trouble as well.

In case of OpenRA vs YR, the reasons I had still apply - YR might be able to do more, but what OpenRA can do, OpenRA can do it more flexible. (veterancy levels and bonuses are hardcoded in YR, asin you can only apply a bonus once, such restrictions don't apply to OpenRA).

On the other hand, one can also say that this flexibility is why OpenRA YAMLs are a lot harder to maintain than their respective YR INI counterparts and I can understand that - one of the major struggles which killed my mood lately was my idea to introduce the Threat Rating logic (technically doable) in AS but I haven't got there to go through all units and fix thzeir autotargeting as part of this.

You're indeed correct that the system requirements suck though but that doesn't play a role in my silence.