Make sure to backup the existing anoxdata folder in case the need to revert the changes.

So far most of the textures that could've been upscaled are added. Some minor stuff is still left. The mod requires a lot of testing, the things to pay attention to are:

The package is pretty huge, so I am trying to exclude all the textures that are unused in the game. To contribute in finding them you can visit The Cutting Room Floor page.

If in any case anything goes wrong there can be 3 sources of the problem:

Before using that combination I tried a couple more algorithms and models, but that one has the most authentic output. 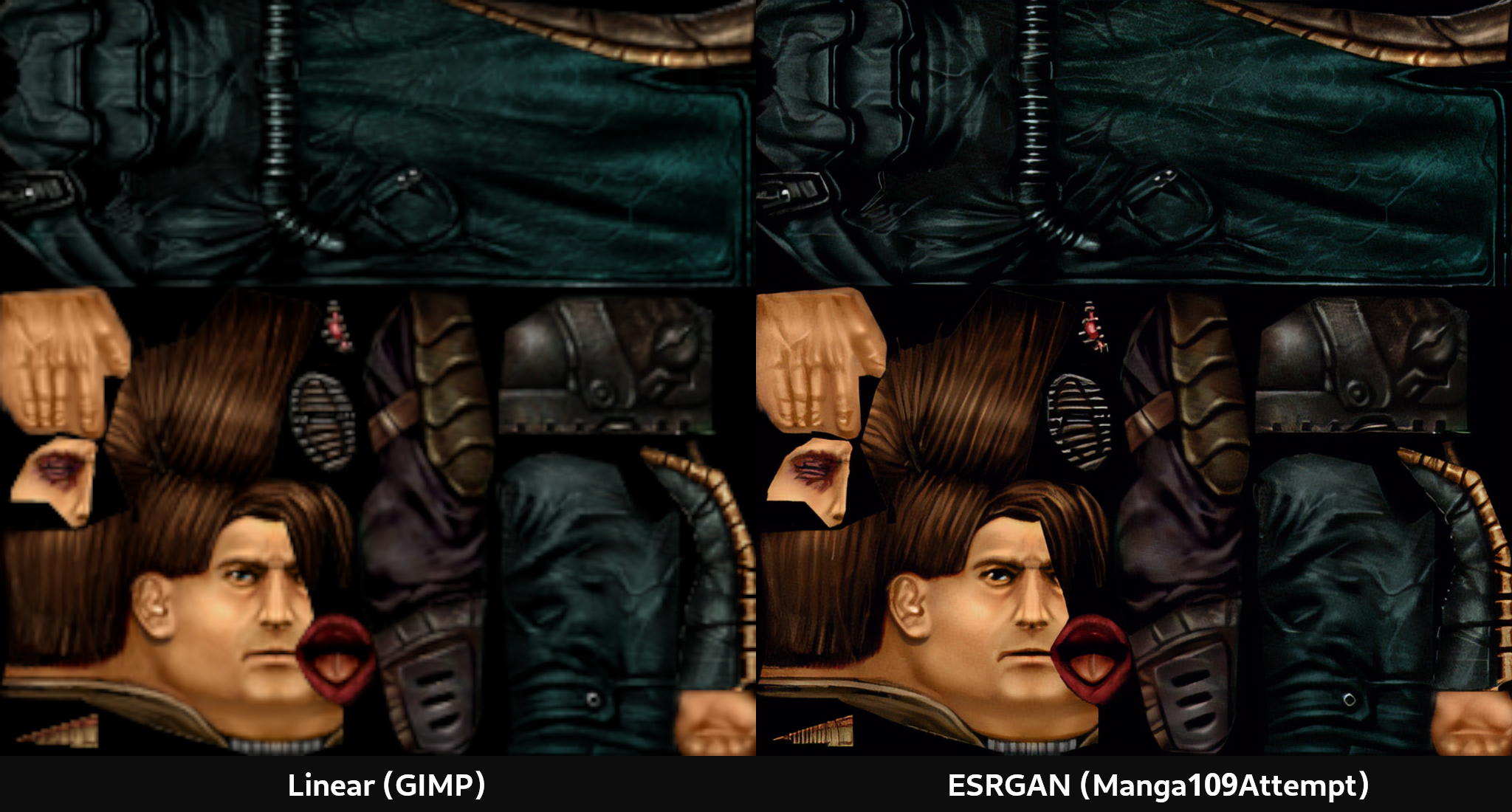 Sometimes just upscaling textures is not enough, especially for characters. Some of them blink and such and that is controlled via .ATD files (procedural textures) which need to be altered for upscaled textures.

The algorithm doesn't upscale transparent textures by default. So alpha channel for these textures needs to be upscaled separately and matched with the new texture.

Regarding textures for level geometry

The textures that cover level geometry are not really easy to replace. For example, if you were to make any texture 4 times bigger it would take 4 times more space on surface, therefore upscaling like that wouldn't really work right away.

So far there are 2 theoretical solutions:

Credits to Laguna (Stiv) for the third solution. It actually works, however there needs to be some sort of a script to automate the process.

So the current solutions don't seem really trivial therefore, as for now, mod is focused only on upscaling of what is possible with the current tools.

Upscaling produces a little noise pattern which is fine to have on most textures. With skies it is not really fitting. The only exception is skies that have stars, the areas with stars are not denoised since they are apparently being recognized as a noise pattern and get toned down a lot.

Most of the textures in the game use .TGA file format, the other files use .PNG. Not much can be done regarding .TGA to reduce the package size except for RLE compression. Using indexed color palette with .TGA images does not work, the following message appears:

Regarding .PNG it is not easy as well, the game seems to not be able to recognize images with indexed palette, pointing out incorrect colortype value. Some textures are allowed to be indexed for some reason (Stiletto), but some are not (Boots).

Fixing animated 3D signs that are not playing animation in the patched version of the game.

Explains the issue with partial transparency in the patched version of the game.

Version of the mod without high resolution textures.

Hi,
I manged to write a jupyter notebook for scaling the uv coordinates inside compiled levels. Some have a MAX_MAP_LIGHTING problem when using 4x scaling but 3x seems to work fine. I uploaded the notebook here but it is currently waiting for admin approval. You can visit it in my githup right now though:

If somebody knows how to work around the MAX_MAP_LIGHTING problem: I'm interested! :)

I tried the 3rd solution for the textures.
It works, but only at the level where the process was done.
Transitioning to another level, the textures get messed up again due to their size.

The gamma control doesn't work in my emulator, so I need some way to fix the pitch-black / dark environments.

Is doing textures the only way? Or can lighting in the worldmaps be adapted?

This game is one of the best RPG game ever in my opinion and still dont have remaster, sad :( btw great mod, keep up good work bro ;) cheers

After all this time! Finally a texture mod for this masterpiece! Thank you!

Oh this is incredible. Here's a game that is SO deserving of a remaster/upscale treatment. The characters, the atmosphere and music are memorable and I can still remember it so well, even after all these years. Thank you for this. I just finished reinstalling the game and will test this mod.

Awesome! I was just thinking of replaying this. The Characters look gorgeous, and I'm always a fan of bugfixes! Any plans on upscaling the environment textures?

Oh my apologies, I just read your article about the environment textures. I had read there were difficulties before but I had no idea that's how it worked. Sucks that's an engine limitation.

It's probably possible to make it happen, there is a method that actually works, but not automated (added in the articles).