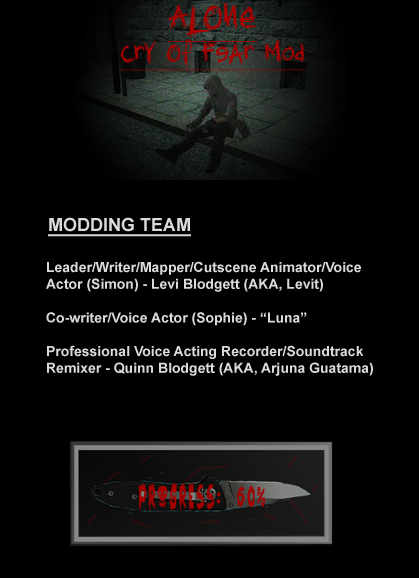 Despite it being nearly six months since the last article, I've actually been back to work on the mod for about a month and a half now. The most recent weekend alone, over the course of two days on a single map, I finished the level design, added all of the details, lighting, and enemies to the map, created all of the scripted events, and started work on the next one.

Progress is going well, and I'll have several screenshots coming soon. Not only that, but when I add the last couple of tweaks to a couple of maps in the chapter, I'll show off some in-game footage of several maps in Chapter 3!

In other news, I have created a Patreon, so people who want to support my work with money can do so, while my content remains free!

Patreon functions as a sort of monthly tip jar. Let's say you choose to regularly donate one dollar; in the course of an entire month, if I create a piece of content, I get that dollar. If I create nothing that month, I get nothing. If I create 10 pieces of content, I still only get just that 1 dollar. Patreon is designed to prevent scammers from spam-releasing crap and getting a ton of money. It doesn't matter how much content you release; as long as you release one piece a month, you get just the one occurrence of the donation for that month.

By becoming a patron, you will get your name featured in the end credits, and will get access to special screenshots and videos of the mod before they are released to ModDB. Anything counts, and I would greatly appreciate the help.

Also, keep in mind that the Patreon includes not only the mod, but also my youtube channel, and my soundcloud.

Due to recent events, the production of the mod will be temporarily slowed/halted.

An update on the status of the project, and a new addition to the team.

We discuss the upcoming version 2.0 of the demo, and reveal that we're releasing the production files for public use!

We discuss the current state of the project, including info on the subject of release dates.

This is the updated and expanded demo, packaged in a self-extracting file.

Replaces all ranged weapon sounds with sounds of The Bane, a weapon from Borderlands 2.

A suicide map of the abandoned asylum from the Cry of Fear main campaign.

is this custom story dead or not?

I love the custom weapons you used, they are brilliant, the demo was pretty good although i got stuck with a glitch that won't let me go through the door to saxon ave. Suicide Map is great too :D

I really enjoyed playing this and i can't wait for the full thing, there were a few annoying bugs tho but i guess it was just a demo. Youtube.com

Really excited for this.

Don't kill the project, man! Not very many people make content for this game anymore!

this sounds really cool keep up the good work!

Looking forward to the release.

Leave us Cry of Fear