BETA 9.1 is here with some new features, as well some polishing. I have altered the enemy spawners to be a little more survival-horror-esqe.

BETA 9.1 is here with some new features, as well some polishing. I have altered the enemy spawners to be a little more survival-horror-esqe. 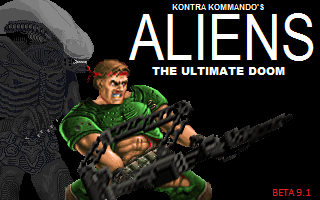 This is awesome work ! Nice !

Can't wait to test out this release.

Going to download, play, and share my thoughts afterwards. Aliens has always had a special place for me, and the video preview of the conversion looks quite nice.

I remember when you first started it, really like how its going especially the flame thrower :)

Will it support one of the Maps of Chaos mods

My opinion after about an hour of playing:
#1 Randomness is overhelming. I know it makes mod replayable, but it annoys. From what I noticed it revolves around very random loot (in 3 plays I could find in the same place flamethrower, small armour, and pile of rubbish). Maybe you should at least leave weapons places untouched?
Variable and uneven amout of enemies drawn every play. In 2 plays on the hardest ("No one can hear...") setting you can find 6 enemies on whole map, as well as 46.
Mixed enemies in rooms. There's something wrong about 2 dozens of androids and aliens waiting calmly for your arrival to set off a battle. I'd change that.
#2 Eniemies, especially aliens are blocked by their dead friends' bodies and acid blood.
#3 Altered piles of boxes/stuff lying around. I'd slightly decrease their number.
That's all about problems I found out. As for now. I honestly think that mod has huge potential, and is very fun to play, but it needs randomizing, AI correct. Most of work is already done.
I've awaited something like that since Alien TC. Thank you for creating that.
Suggestions:
1.: In project brutality addon for Brutal Doom there's feature added- ipms are able to hang, jump of and in, move and shoot from ceilings. I think it'd be great to implement it here too. Try asking them about that.
2.: Maybe you should try preparing some balanced predefined enemies spawn for DOOMU/DOOM2? Or even better your own wad pack with something like that? Because, well for many DOOM fans won't like randomness at all, honestly. We're accustomed to mostly constant amount of enemies in each level.

Also mod works quite good mixed with other wads (by ZDL). I've tried freedoom, and sunlust, and it looked good except for tons of properties lying around, and somehow messed up/buggy switch textures.
Keep it up!

First, let me just say thank you. This is a fantastic mod and a better game than Aliens Colonial Marines, which is pretty astonishing to think about. You deserve to be congratulated. The combat is frenetic and andrenaline-pumping, and the textures, weapons, enemies, and overall atmosphere are really great. I'm seriously having a blast and my heart is pounding fighting these xenos. That being said, I feel there is quite a bit that needs some work...

1) "Plink-PLINK-palink-plink-PALINK-PLINK-plink". Please, please remove those bouncy bottle/tank things or at least make the sound from bumping them only trigger like 1/20th of the time. They're seriously everywhere, and you can't shoot them to clear them from areas you're frequenting, and there are so many of them that you wouldn't want to waste ammo on them even if you could. This, combined with the stomping of aliens and the incessant motion tracker is literally all I can hear most of the time. Which brings me to...

2) The alien walking noise is too loud, too bassy, and generally just too present in the game. Think back to the films... if the aliens had always had massive footfall announcing their presence everywhere they went, the movies wouldn't have had nearly the same amount of tension and suspense. The only alien that should have its footsteps at the current volume is the Queen. You already gave us an awesome working motion tracker... why not turn the volume of the footsteps on normal xenos WAY down so that we actually need to use it?

3) Fighting multiple queens at once. I believe other people have brought up the randomness, and personally I love the randomness of the ITEM spawns, but I think it's really kind of immersion breaking (not to mention punishingly difficult) when multiple queens spawn in the same room. The overall randomness is cool, but I feel one queen per level (or at least, one per room) is the most that's called for.

4) On that note, now that I think about it, maybe there is too much randomness happening? I'm on E1M8 already and I still haven't found a shotgun? Is there even a shotgun? There seems to be ammo for it lying around... If that is due to randomness, then perhaps at least a few static weapon spawns are in order so that people will be able to get what should be the first weapon (aside from the starting weapons) in the game. It definitely feels like one should have the shotgun before one has the flamethrower. But, boy, do I love that flamethrower!

I think that's all for now. I hope this doesn't come off as harsh - I really am loving this mod so much that I just want to help it be even better. Thank you again for sharing your work with us!

Can you remove the tracers? Looks kind of stupid.

Any chance of a zandronum version?

I downloaded the latest gzdoom and then got this mod but the sounds for the guns and motion tracker don't work. Anyone have this problem?

Nevermind I fixed it.

I thought it would just be a remodel and retexture mod...but it completely changes the game!!

I am not scared to go round every corner and I am using my equipment wisely, because everything is so unpredictable just like the movies!!

The sounds and effects are fricken awesome!!

Also the way the marines are placed throughout the map makes it a nice surprise to find help, and to hear them say quotes from the movies..just pro haha

Hahahahahha I just saw predator get swarmed by xenos..and when he died he self destructed while laughing like in the movie OMFG this is pro!!

The DoomGuys Fans & Clans with 158 members