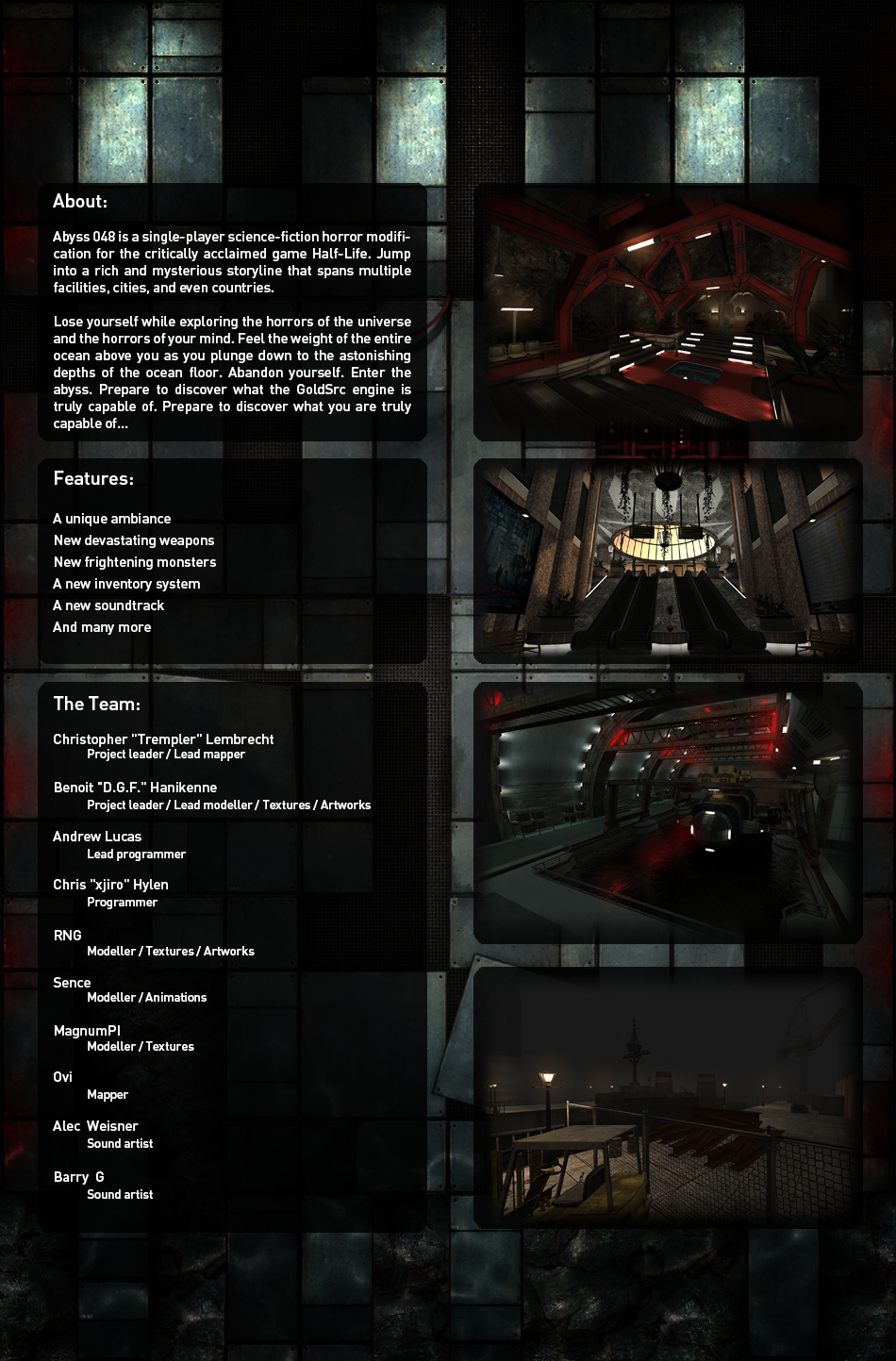 Abyss is looking for help !

So far we've rewritten the story and are finalizing it right now.
Some changes to the mod are now being planned because of changes in the storyline.
We have decided to reduce the horror gameplay in the mod to go for a better story and more action.

Thank you for your support! I am glad to see so many people are showing interest in our Half-Life mod.

Trempler deleted more pictures than he originally planned while the team is welcoming two new members ! We're also looking after a character designer !

Hey! I'm glad to announce, that our programmer has been working hard and improving the engine. Also, we're well aware of the update given to Half-Life...

Hey people! I'm happy to tell you that our programmer has been working hard on the engine code, doing optimizations and that sorta nice stuff. He's currently...

Good day everyone. The MOTy 2012 awards voting has begun and we're counting on your vote to help us getting more attention from the community !

Ok here is the texture pack from PhilipK!

Ok here is the texture pack from PhilipK. I added some changed versions too, red/green/blue and other stuff GL and Have Fun with it ! Credits go to PhillipK...

So many big names in the team, such beautiful screenshots - that music track was fantastic - evoked the same feelings of awe as did Bladerunner... :DDD

What a huge loss, such a shame this incredible work is archived - please consider finishing it? Something this good shouldn't be allowed to fade away! Or at least could you stitch together what there is so we can at least explore it in all its grandeur? Please, Guys! The Community needs you...

Ceased development?!! Please tell me there's a good explanation for this.. D:>

I can't believe it's gone, this mod was easily one of the few things to look out for in the dying GoldSrc community. Such a shame. Well good luck on any future project, I will be sure to look out for them.

Awesome,good job. Have not seen anything better then this mod on goldsrc. Nice level design. Good luck with mod =).

This is one of the most promising Goldsource mods currently in progress and certainly one of the best-looking mods ever, released or not. The mapping reminds me of the almost decade old mod Nightwatch, which had some of the most impressive mapping I've ever seen, and the Trinity engine also seems to be used to great effect, very atmospheric shots. Great to see it used well for something other than Half-Life "HD mods".

By the way, do you (Trempler or anyone else) know if the recent-ish update broke the old versions of Trinity? I've had the last version (v3.08f) sitting on my pc since it was still open source, but unfortunately haven't been able to use it much until now due to stuff, and was looking forward to finally giving it a proper go (assuming the author is even okay with other people still using it?), only to find out that shadow maps don't work at all anymore. I doubt it's my pc as I have a pretty powerful rig.

Just noticed you mentioned this in a previous news post - bummer.

Still supporting and waiting with bated breath. Damn, this looked more awesome than I remember.