hmmm....not sure what to make of this

hmmm....not sure what to make of this

I was fighting the bandits in the merc base in Zaton and Duty and Loner stalkers got stuck in with me. Once the fight was finished I found this Exo Stalker just standing there and the Pseudodog chewing his butt. Didn't even move to defend himself. Went on for a while and then his team mate wonders over and aims his weapon but doesn't fire. Random zone happenings lol 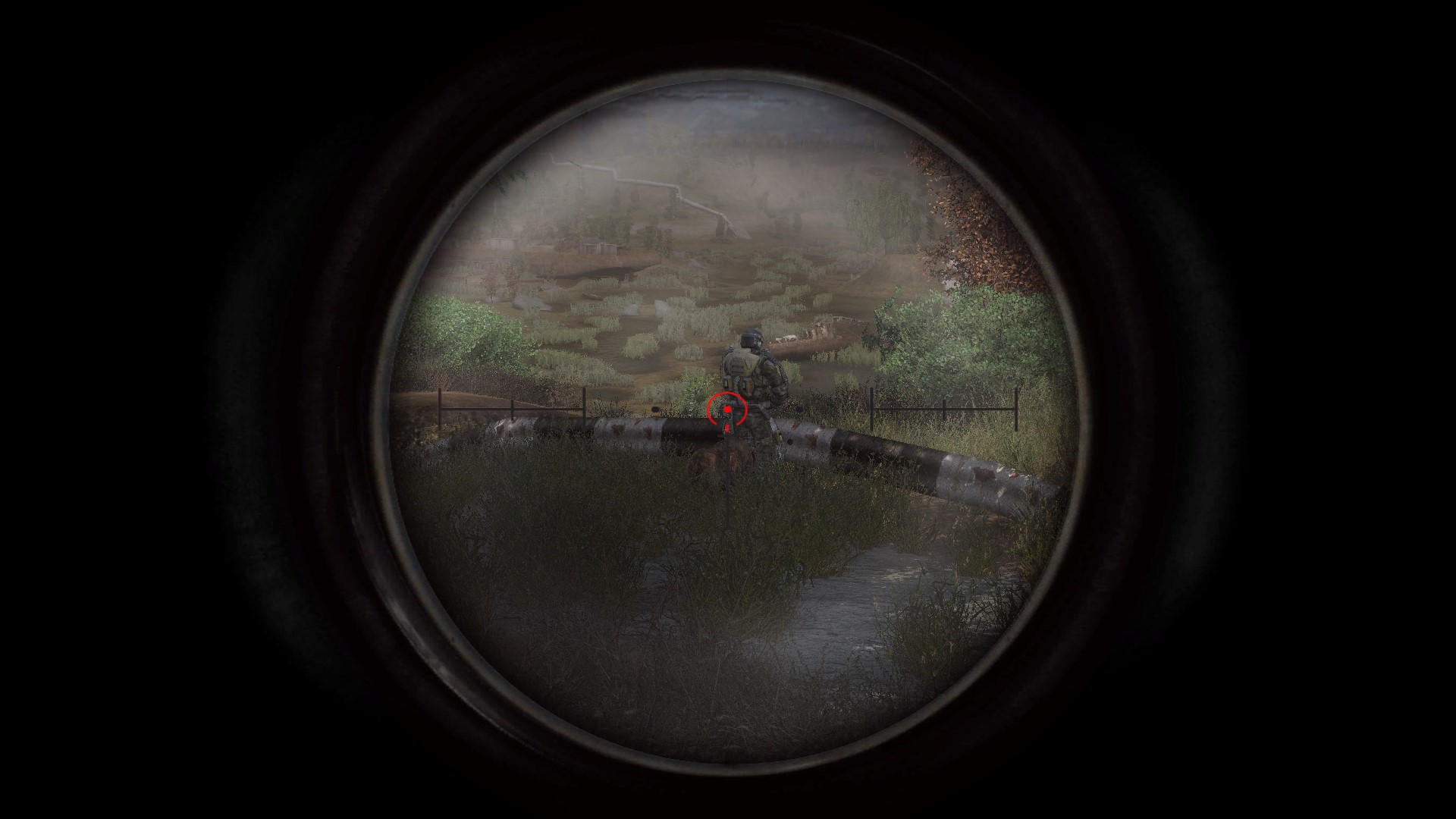 Right. I'm on my second play through and playing recon for the first time. Tough going especially at the beginning with the under powered load out. I have to relate 2 things:

a - Chimeras spawn to the left of the merc base in 2.2 (as you face it). 3 of them spawned when I went farming, but they were roaming in that wooded section minding their own business. A cunning plan then formed in my mind...what if piss them off and get them to chase me into the merc base? Well let's just say the bandits (full spawn of 11) got chewed to bits whilst I sat back from a distance observing with my binoculars. Swept up the last wounded chimera and looted unimpeded.
b - 6 chimeras spawned near the sawmill and proceeded to wipe out everything in that part of the map. I was in the village on top of the hill perched on the top of the structure with the sloping roof observing with my trusty binoculars. They then made a beeline for me when I took potshots at them. Luckily a stalker and duty squad happened to be passing through and served as cannon fodder for the chimeras. Chimeras went down with 7 of the 8 NPCs claimed by the zone. I stayed on the roof.

2 - Jupiter plant - I decided to deploy this new tactic which I've dubbed "stoke the hornets nest".

a - Take out zombies that spawn initially.
b - Mine the hell out of the corner and corridor near the admin building.
c - Stoke the hornets nest - Bulldog the hell out of the section where all the muties spawn. 3 pseudogiants and a controller decide they don't like me.
d - Run into the administrative building and quickly pick up the documents.
e - Blacks squad spawns.
f - A complete cluster f**k ensues. I almost feel sorry for the mercs.
g - I chill on the top floor and basically listen to what is happening because there's no way i'm going down there.
h - Mercs on the top floor descend to help their buddies (aka suicide). I mine both ends of the corridor. Wait a little longer. Take out the muties that decide to venture upstairs.
f - Descend to to the lower flowers and realise that it was the right choice to be a coward and stay upstairs. Pseudogiant, controller, burer, snork, zombie and bloodsucker bodies everywhere including the mercs.
i - Sweep up the remaining muties...a controller, zombies and poltergeist.
J - Didn't save once which is a minor miracle given my last play through with sniper.

High risk, high reward and totally out your control!

After all these years playing this series and there are still surprises.

My hats of to the the Misery team and all modders. You are gods amongst men!

Playing Misery for the first time - lots of fun

playing misery for the first time - lots of fun 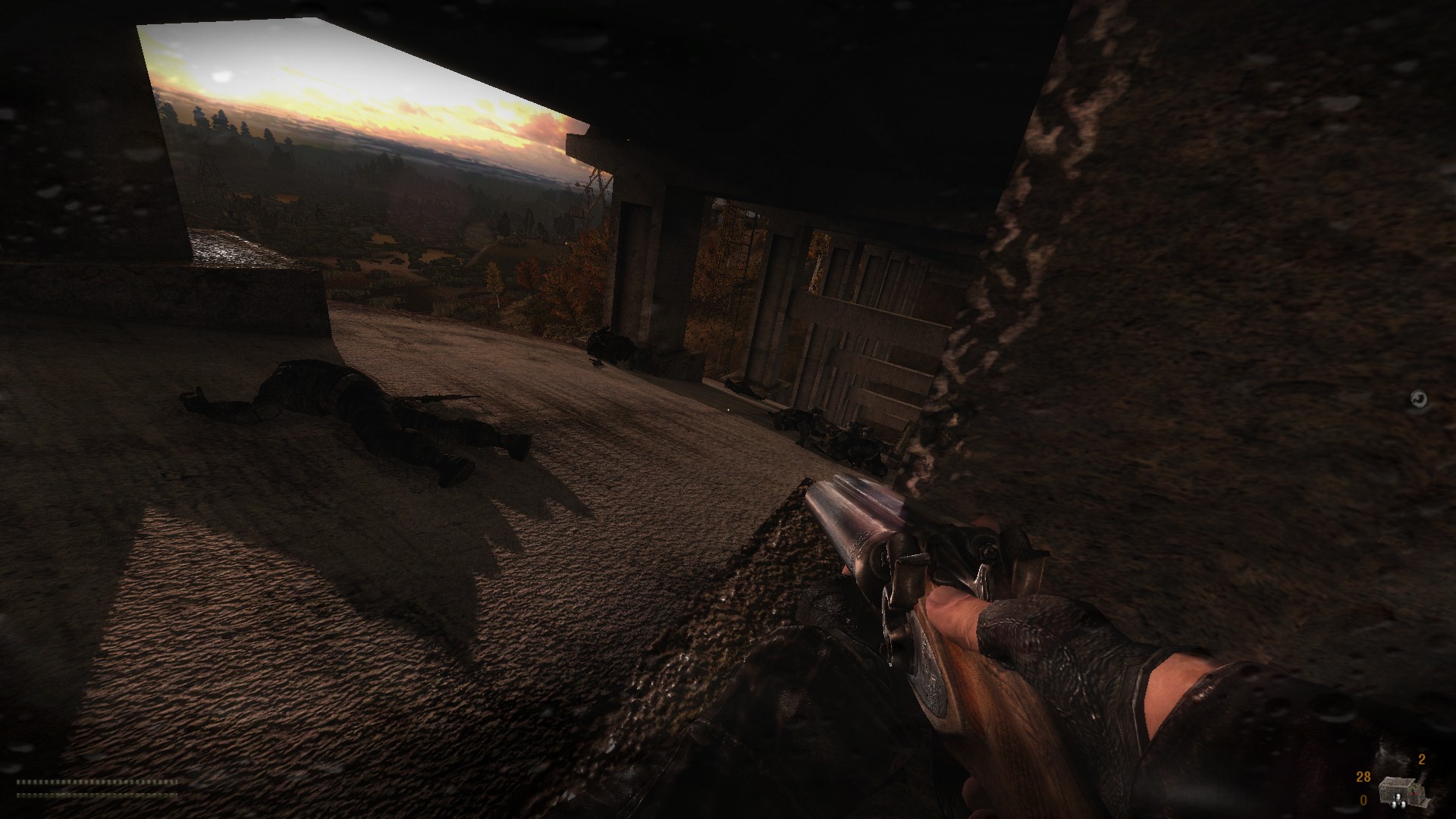 Something occurred to me when looking at some of the corroded textures for weapons in _NightRider_ Clear Sky mod Ghostland, that in the zone very little is new and there will be varying levels of degradation and wear. For example weapons and armour wear with use, but the only outward manifestation of this is a wear metre.

Would it be possible to add in-game effects that indicate wear on equipment? The only place that i think this would work and add some immersion is the helmet. The scenario would be that there is a mutant attack and equipment receives damage. If the helmet is damaged it may have cracks in the visor (ie cracks appear in the screen), jittery night vision (flips from on to off constantly), compromised re-breather so the helmets fogs up and obscures sight etc. Player would have to repair or remove helmet especially if vision is impaired (of course this would then compromise protection against i.e. radiation).

Forcing choices on the fly in a survival situation would be really immersive. I know that you do this to a certain extent already in STALKER, but having graphical queues such as those mentioned above would be very cool.

There are some cool features in other mods such as Autumn Aurora 2 for SHOC that have helmet HUD, player breath sounds, in helmet condensation that are really immersive.

What do you think? Perhaps someone else has some ideas for modders that may further improve immersion and mirror what it would be like to survive in the zone?