This is a smaller, BETA release. More to come in the future. This mod compilation is for S.T.A.L.K.E.R. Lost Alpha v1.3003. Lost Alpha Mod Pack 2014 is a mod compilation that adds many features from various SoC mods to Lost Alpha. Credit to the original authors. It adds about 50 new guns to the game, which are available at traders and NPCs carry them as well. In addition, about a dozen new outfits are available, most vanilla guns have new, high-res unmirrored weapon skins, sound effects overhaul, and the game has been rebalanced to be more challenging. The player, human enemies, and smaller mutants like dogs die much faster. AI is a bit more dangerous, some mutants are far more deadly. Also included is a large address aware patcher, which is an exe file. This will let Lost Alpha use up to 4GB RAM, increasing performance and increasing stability. Remember that this is an early release. More will come in the future, hopefully including a much needed A-Life overhaul.

This is a beta release because it hasn't been fully tested on v1.3003. Also, more features will be added to this mod over time.

Thanks to the creators of Arsenal Mod, LURK, Zone of Alienation, and every other mod I've taken from. I honestly don't know where most of this shit came from.

****IF YOU'RE GETTING CRASHES, GO TO YOUR S.T.A.L.K.E.R. Lost Alpha FOLDER AND THEN NAVIGATE TO gamedata\textures\wpn AND DELETE THUMBS.DB****
Thanks to Klaus000 for discovering this issue and solution.

Here is what the mod compilation includes: 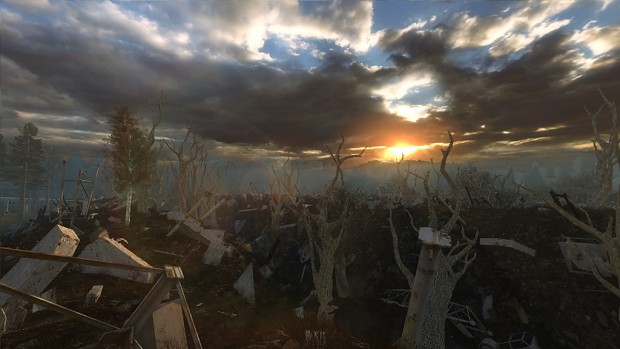 Graphics are unchanged, so you can see screenshots in my profile. You can find videos of it in action on my youtube channel.

Im guessing it has new weapons, are the hands model the same as stalker shoc and la? Or does some weapons include the kingfriday ones?

Hand model is different, not sure who made it. But unfortunately hand models don't change with outfits in LA. Let's hope someone makes a mod for this.

It doesnt bother me the dynamic hand model, i meant the different mesh for weapons. I saw that for your mosin it has the kingfriday one and for the ots (pistol, i guess) its vanilla hand mesh. Sorry i didnt explain myself better :|

I see. It was updated since then, it's all the kingfriday one now.

Huh? This archive seems to be broken...damn, re-downloading this is a pain in the ***.

If gamefront mirror works, I recommend that one. It's faster and has less BS for me.

But I have encountered an impressive bug right at the start mission (I still have to find out if that is a bug or if it is actually wanted), but if you are searching that little bog for the artifact, there suddenly appears a massive Thorn-like artifact right in front me.
It's about 3-4 meters wide and high, and probably is the artifact I'm looking for, just in huge size...can't be picked up (of course), so I can't complete the mission.

Hmm can you take a picture? The mod doesn't affect quests, so it sounds like you just discovered a bug in LA.

Got that bug sorted, the big thorn was indeed a feature, I wasn't looking careful enough for the actual artifact ;)

boredgunner is there maybe gona be new weapond mod for lost alpha dc?

Hey boredgunner, thanks for the mod pack! Just wanted to ask how can I re-enable the minimap? Is it even possible?

You can indeed re-enable it. To do so, go to your Lost Alpha\gamedata\config\ui folder and delete all six of the "zone map" files.

Can I get a solution to this? As I posted a few days back, deleting the "Zone Map" files does not work and crashes the game.

If there is no solution, I'll just have to uninstall the mod, which I really don't want to do as I like all the other features. Thx.

By the way guys, I'm gonna update this for better compatibility with patch 1.3003. In the meantime I suggest deleting the scripts folder in S.T.A.L.K.E.R. Lost Alpha\gamedata

Is this Mod also compatible with the 1.3003 patch? Or it's better to wait next version? thx in advance. I hope this mod makes it possible for me to use sunshadows, cause my gtx 660 should definitely handle them, but nonetheless have huge performance issues since the 1.3002 patch, also by turning them off. Maybe if the game would use all the vram my card has, would change something. It didnt change with the new official patch... I would also turn sunshadows off completely, but the hole game becomes very dark without them. Im a pcnoob so help is allways welcome ;)

The mod doesn't affect graphics or optimization. 1.3003 compatible version is being uploaded now.

1.3003 compatible version is uploaded. Be warned that it's a BETA version and hasn't been thoroughly tested on v1.3003.

Yeah sry i missunerstood, but dont u think that the thing that the game can use all the 4 gb vram may help against performanceissues? Btw is a NG required?

New game isn't required. You're right about the 4GB patch, it should improve performance and stability if you run high graphics settings.

thank you soooo much !

I'm always in for some surprises, but somehow I'm pretty eager on knowing what awaits me in this case *:D

which submods were used ? which weapons and suits were added *;D ?! Stuff like that, only if its not too much work, otherwise I'll be surprised so its fine either way *;D

Hmm are you sure you're in for some surprises? So far no real submods are used, though I'll be adding some when they come out. So right now it's really just a balance overhaul + equipment pack. You can see some of the equipment in action here.

See my above post: to enable minimpa, delete those files I mentioned earlier.

Did you use the 4GB patcher?

yes, i have
i will try on another pc today, may have some issues because i've installed gane on another partition

Open fsgame.ltx and set the $game_data$ values to true. So it should be like this:

is not this, it was first thing i've checked :)
i've tried including uninstalling and reinstall whole game
same error :(

Problem solved!
Just need to delete the Thumbs.db file in Textures/wpn/ folder and all works just fine :)
Now lat's play, thanks boredgunner for mod and for help

Thank you for solving this problem! I'll put it in the mod description.

- EDIT: What's interesting is that the Thumbs.db file isn't in MY gamedata folder, even though the uploaded file here is in fact my gamedata folder. Where did it come from?

thumb.db is generated automatically by windows and contains information regarding picture preview in folders. (i didnt chech the date of this post , but needed to posted.)

i don't have any idea, your mod is single one installed
and solution i've founded on GSC game world forum, i was not the single one with the problem
i've looked now in mod's archive, in gamedata/textures/wpn exist a thumb.db file, so is not from my computer

Reuploading it now... HOPEFULLY it eliminates the Thumbs.db issue.

The thumbs.db file is generated by Windows automatically if you open a folder in preview mode, so its a end-user issue that you didnt cause.

My mod doesn't change AI, AI is just that bad in Lost Alpha. And yes I changed the flashlight. I don't think any of the weapons are fully configured.

But anyway thanks for the mod. And I wish you success in the future development! Но все равно спасибо за мод. И желаю успехов в дальнейшем развитии!

That's right, I'll put into the description that it's English only until someone translates it. Thanks for the heads up.

Game crashes when entering a repair dialogue with AEK-971 in my inventory.
And the weapon selling prices are breaking the game balance.

Do u try to make the additional weapons upgradable too ?
That would be nice.

I didn't make them upgradable yet. I need to fix some bugs first, thanks for reporting another one. I just fixed it, looks like repair dialogue with the AEK-973S will also crash the game until I release this update.

I get the same crash any time I speak with a technician about a repair or upgrade.