It is a time of desperation and despair. Still reeling from the ghastly toll of the Battle of Terra, humanity finds itself pushed closer and closer to the brink of extinction at the hands and claws of the savage Kilrathi Empire. The Confederation is trapped in a seemingly endless cycle of defeats, and hope is slipping away. Already, the Kilrathi are making their final preparations to finish off humanity once and for all. The end, it seems, is near.

In this setting, human drama is at its most extreme intensity. Hope, fear, desperation, courage, camaraderie, and loss are part of the daily struggle for the people who refuse to stop fighting, even in the face of seemingly inevitable defeat. This is humanity's greatest struggle, its defining moment. This is the Wing Commander Saga.

Making Of: Designing the Home Base

She’s big, she’s pretty, she kicks Kilrathi butt halfway across the galaxy! She’s your mothership, the TCS Hermes. Your virtual home away from home in the Wing Commander Saga campaign. A lot of work went into planning the Hermes, and we wanted to share you some insights behind our reasoning and thought process. 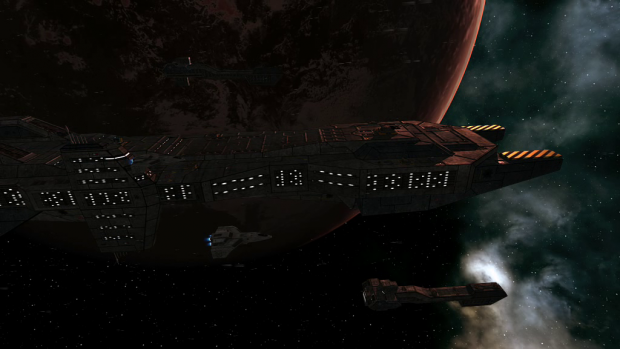 The Hermes is a Jutland-class fleet attack carrier, a naval design not found or seen in the game, but briefly mentioned in the novels and the recent WC Arena manual. It was first seen in the “WC Bible”, an excellent in-house document that made the rounds at Origin. Our lead writer, who has been with the team since virtually the very beginning, took the information and ran with it. He thought a lot about its intended design and role, and researched on what it could bring to the table. He drew the ship on technical blueprints by hand, and it was modeled and rendered into digital format. There were several more versions to account for polygon and texture efficiencies, but each version stayed 100% true to the lead writer’s original vision of the warship. In addition to Wing Commander Saga, the Jutland-class carrier also has a cameo in the most excellent Wing Commander Standoff mod, which we highly recommend all WC fans to check out. 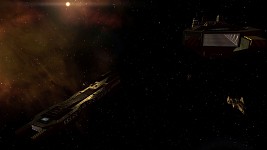 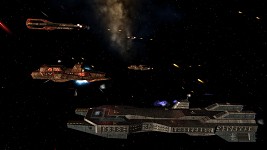 It was our intentions from the beginning (about 9 years ago) to make the Hermes a carrier already seen in the WC Universe, a Concordia-class carrier (the same class as the TCS Lexington from Wing Commander 4). It was after a lot of debate and discussion that a decision was made to change the ship class. Well knowing that this might turn some eyebrows or some concerns, we thought it would be best to explain the reasoning behind this: gameplay mechanics, technical evolution, differential advantage, and unwanted redundancy. 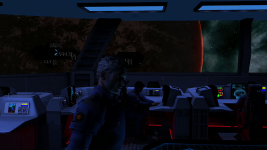 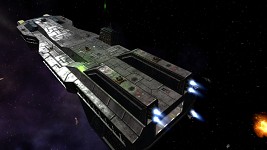 The main point: every official Wing Commander game flies off a different type of carrier. The excellent WC Standoff team has done this by having the main character based on the popular CVE escort carriers, and WC Saga intends to carry on this tradition. There has already been an experience of seeing the end of the Terran-Kilrathi war from the “worse carrier in the Fleet” perspective: and that’s WC3. The WC Saga Campaign does not want to be seen as just another clone of WC3. In addition, there’s some concerns with using a light carrier. WC Saga is supposed to show off a new engine, and that means more intense actions then the old WC3 game from 1994. Technology has improved in the past 18 years. The TCS Victory is supposed to be the most famous light carrier at the end of the War, having another light carrier participate in more intense actions would, in a big picture sense, “take the spotlight” away from the Victory. 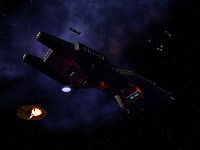 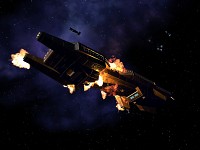 With no intentions to just make another WC3 clone, the Saga team spent a lot of time debating the merits of each carrier type to be picked. Having the main flagship be a fleet attack carrier gives a hard look at the time of WC3, with the Confed war effort going down the tubes. Having a “first response” carrier as your home ship shows the audience firsthand the defeats Confed has been going through. When I was playing Wing Commander 3 as a teen, I wasn’t above thinking, “Where’s all the other hotshot carriers out there? Why aren’t they doing anything?” Well, Saga answers that. We see why the main fleet is in retreat, how the main systems are falling, and lastly that even the best carriers in the Fleet are merely delaying the inevitable. In addition, we had the option of choosing from a multiple list of carrier names to christen the WC Saga flagship, and the Hermes was on the top of that list. This is because the Hermes has stood out in the WC universe as a ship that did its part. The Hermes was the one who found the Behemoth target, in a dangerous Kilrathi system that had blocked off comms without any hope of backup: perfect for an attack carrier. 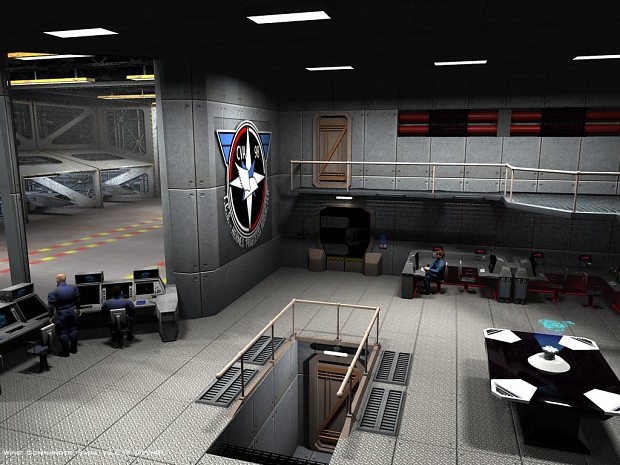 In addition, there has been many speculation or even assumptions, but the fact remains is that the Hermes is an unconfirmed carrier. It’s one thing to hypothesize, but it’s another to regard a hypothesis as absolute fact and then defend it to the death. There is no confirmation on what class it is, other than the fact that we know the Captain’s name (Captain Moran’s name was in the Wing Commander 3 novel). The fleet picture numbers 60+ ships, which is not all of the “hundreds, probably thousands of ships” that the WC3 official script described. 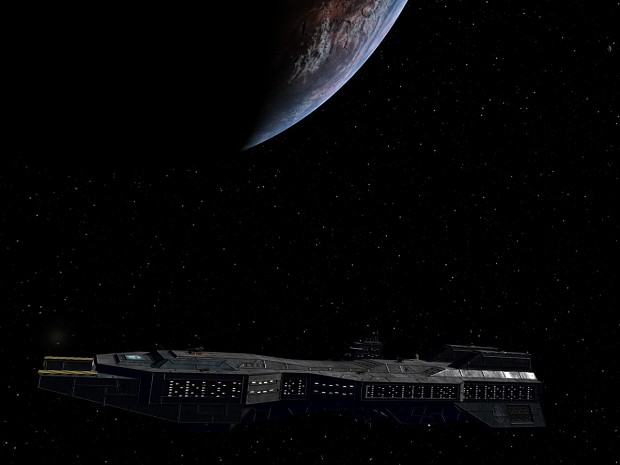 And lastly, the Jutland class carrier gives the Saga Team some creativity and flexibility in art and design. There’s no canon stats on what it looks like, or how long is it, or how many weapons it has, or what the bridge looks like, or the exact location of the men’s toilet in the 4th deck. This leaves room for the artist to make up his main hall or bridge without fear of contradicting other ships and games. What would happen if Saga was based on an existing Yorktown or Concordia or Confederation warship? The barracks, bridge, flight deck will have to be exact to specifications.

We are pleased to release a revised version of the original feature trailer. This is the version that was originally scheduled for release in early March...

Getting the Difficulty Right

Wing Commander Saga is quite a hardcore game with several missions where you must quite quickly figure out what to do or die. Many times.

For this update, we would like to go into detail about why we chose Wing Commander and not some other space sim, such as X-Wing, I-War or Elite to base...

The Wing Commander Saga team is happy to present you with the revised version of the original feature trailer. This version was originally scheduled for...

As an extra for all of you, we’ve got just what you need if you can't get enough of the game - we have decided to release the music of Wing Commander...

So far, reception for Wing Commander Saga has been enthusiastic. We experienced about 50,000 downloads in the first 24 hours after the release of the...

The newest Wing Commander Saga patch is available, and it fixes a number of small issues that have plagued gamers since launch.

We are pleased to present you with Wing Commander Saga: The Darkest Dawn. It’s humanity’s most desperate hour, a desperate struggle for survival against...

Do the downloads work on Linux, and do they require FSOpen?

is this a mod, and if it is what game

A total conversion based on the highly Freespace 2 (SCP) engine.

Just like any FSO engine based game. The easiest part is creation of new missions as detailed here: Wcsaga.com

Man, I have finally gotten back to this after switching pc's :D, that does however mean i have to restart my files D:, but that's ok cause this game is awesome :D

Depends on the version you have downloaded - the old demo contained only one campaign consisting of five missions.

Check the campaign room there should be another campaign or you could have downloaded the prologue in which case you need to download this Wcsaga.com

Wing Commander Saga is probably one of the most polished indie releases I have ever seen. I have only played through about half of the campaign(I think) but so far it has had a large variety in the mission structure with very solid combat mechanics. The characters and voice work can be spotty at times but overall it is superb especially considering the sheer volume included in the game.

Any Wing Commander or Space combat sim fan would be silly to miss out on such an amazing free release.